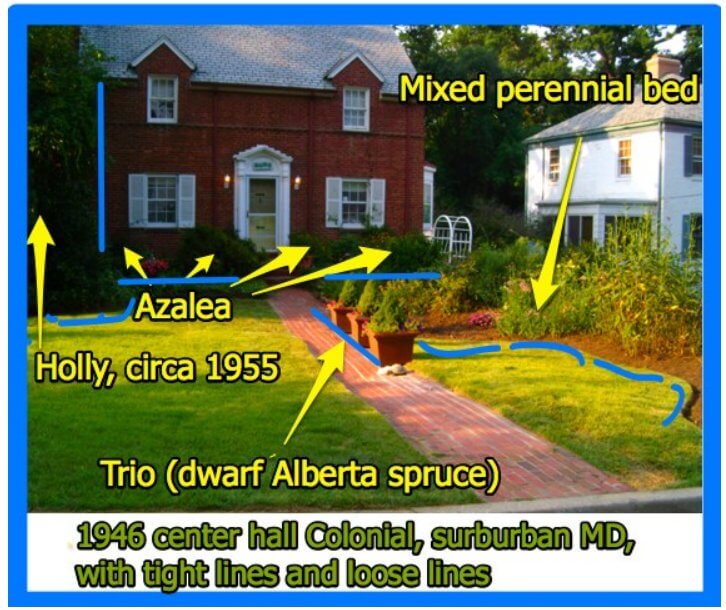 Today: A guest post by Marybeth Shea on how to integrate climbing and rambling roses into your garden. Marybeth writes:

Ted Cleary of  Cleary Design emailed me after the hybrid tea roses article. We are both glad that roses as a landscape “tool” are coming back.  Let’s look at one of the easiest ways to use a rose in your Mid-Century Modest landscape: climbers and ramblers.

But first, what canvas will you place a rose against? The canvas is composed of your home and the green “stuff” near the foundation and close-in yard.

First, two words on architecture:  tight and loose.  Look at the tight residues of line-inspired landcaping from the 50s and 60s in the photo above.  See also the loose instinct of the 90s – present here also in the “waving” perennial border.  The original foundation beds next to the house under the windows are rectangles.  Azaleas planted in the 50s remain. Gone are the hugely overgrown Forsythia bushes that dwarfed both front windows.  To the left of the house is a huge, horizontal holly bush, also from the 50s.

One way to instantly assess mid-century garden principles is to ask, “Are the plants near the house arranged tightly or loosely.”  Roughly, in the 40s, 50s, and 60s, landscaping adhered to tight norms.   Compare a row of alternating red and white marching geraniums with a bed of mixed grasses and perennials.

Think Oehme and van Sweden who brought us the New American Garden style. This is the landscape architecture movement behind the now common loose, meadow-like plantings.

Back to tight plantings: Recall the tasteful foundation plantings so iconic of 50s surburbia:  the tight line of geometric shapes in a long rectangular bed in front of many houses comes to mind.  Think cylinder, pyramid or cone, rectangle, and square, but in green living shrubs rather than geometry’s abstract conic sections. You may see these combinations left over from the 50s and 60s: 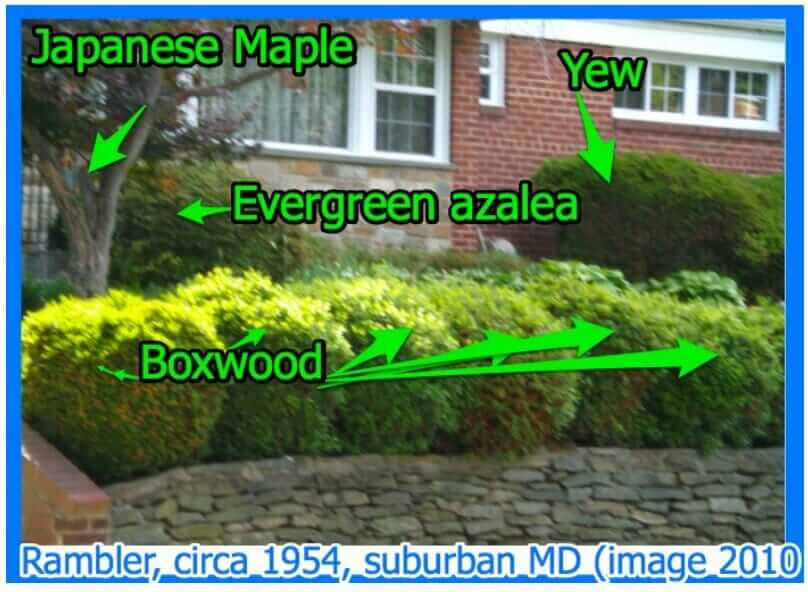 Similar schemes were planted in front of neo-mod Capes, ramblers, ranches, and center hall Colonials alike. Many survive or were renewed in this pattern. The rough design rule: Provide a line of green shapes to soften the foundation.  An additional two factors reflected 1) cost and 2) locally-available shrubs.  In warmer areas, azaleas often replaced evergreens as foundation plantings.  In northern areas, hardy conifers — including the Alberta or Colorado blue spruces — often frame a mid-Century Modest/Modern house.

But, I digress.  You await advice on the romantic arching shrubs that offer bloom and fragrance.  Yet, the excursion into the shrubbery norms of foundation plantings is the very background, the very wish for relief.  The  break of curve and floral abandon against line.  Enter the classic rambling or climbing rose.  This cottage fixture of charm translated well into the suburban scheme.  Imagine inheriting a rose from grandmother’s house as a pass-a-long plant.  But the wish to break the lines with curves is a time-honored design technique. 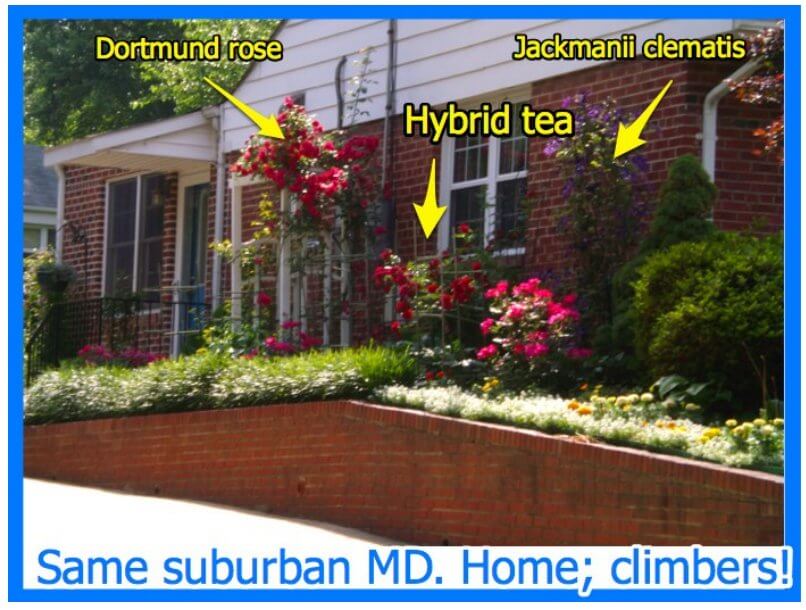 Rosarians now question the division of these rose categories.  In other words, the rose classes of ramblers and climbers may well be the same. But, the common sense notion embodied in the word prevails.  A rambler is more relaxed — lax.  This rose will laze about over a fence, especially in spring.  A rambler also tends to be an intense spring-flowering machine.  A climber, in contrast, is a shrub with theological aspirations. “Nearer my God to Thee.”  The climber aspires high, preferring a trellis to clamber upon.

Tip for both ramblers and climbers: Do not let a rose simply lean against the house however tempted you are. Roses need to breathe, especially in the moderately humid summers of most US and Canadian climes.

One rule of thumb is to place a rambler on a fence but site a climber on a trellis.  The fence will support a horizontal layering of canes and blooms. A trellis will support upright canes and attached blooms.

But, a climblng rose or rambling rose — either class — softens the house or entrance, with welcome and enticement.

I like how the Antique Rose Emporium arranges rambling/climbing roses for your selection:  by year of introduction and by vigor: Look at these Mid- Century Modest candidates:

Against a red brick house try: White Dawn (1930) I grow this deceptively modest rose. The white blooms are gardenia-shaped with a hint of pale green flush at the center.

Against a white clapboard or siding house try: Parade (1953) The saturated pink of this climber will show beautifully.

Red! The quest for red.  Red is complex in all gardens.  Warning: Red is lost against most brick backgrounds. However, should you have a white or soft orange brick facade, you might consider Dortmund (1955).  This intense red single rose is very much like the wild rambler rose found “feral”  across much of the country.

One other red climber/rambler is Don Juan (1958), with more full and blowsy tea rose flowers.  Place against a white, buff, yellow, or light blue background for best effect.

What about yellow?  This color should work with all varieties of brick from orange through terra cotta and buff and the varieties of red.  However, the yellow gene for roses often confers deep susceptibility to fungal problems. Ask your local rose society or nursery for advice.

Ramblers and climbers need special care in zones 5 and 6 and colder.  Check with your local nursery about both hardy varieties and shroud techniques.  Maureen Dewan, who installs and maintains gardens in the Canadian Maritimes, suggests that cold climate gardeners consider a hardy clematis like the purple Jackmanni classic.  More on that exquisite type of climber to come.

EASY MCModest OPTION (fast, cheap, doable this season): Install a New Dawn climbing rose against a white or red brick background. Why?  This 1930s introduction by Dr. Walter van Fleet is among the most enduring and flexible roses ever.  You can likely buy one this season easily, planting now with care or in the fall. Read this range of posts at Dave’s Garden about the shell-pink flush, time-tested New Dawn.  You will get more curb appeal with this pale pink rose than any other rose.  Really: this easy rose “glows” against any shade of red brick.  I grow this classic rose but — alas — do not see repeat flowering despite the promise of many experts.  My mid Atlantic summers may be too hot and humid.

White house? The utter ease and flexibility of this rose means that your MCM forebears would have planted this 1930 rose even against a white clapboard background. What you lose in curb-appeal is gained at the entrance as you pause to admire each perfect bud. You can heighten the color tension by installing a Tiffany blue — teal, aqua, blue-green — arbor or trellis. This closely related turquoise is 2010 Color of the Year.

Paint a simple trellis with this neo-retro color. Every thing old is new again!

About Marybeth Shea
An avid gardener (born 1960), Marybeth’s two homes over the last 27 years were built in 1945 and 1946:  first, a tiny, frame gable-front cape sold even before it was complete to a returning vet, and now a modest center hall colonial, also sold originally to a vet. You can read more about her garden at her blog, Gardening with MBloom.

Copyright 2010 RetroRenovation.com
Any re-publication all or in part strictly prohibited without written permission.