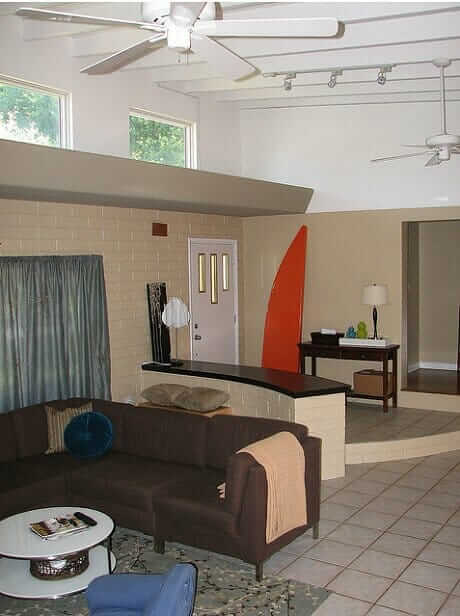 Jen’s *new* mid mod home in Florida has a beamed ceiling… she needs to add insulation… and writes in for advice: Does she need to keep the beams?

I just recently found your blog and love it already! You’ve got tons of great info, and I’m desperately hoping that you and/or your readers can help me out with some advice. A few months ago my partner and I purchased a unique, mid-century home in St. Petersburg, FL. It has tons of great features and even more potential, but we’re having difficulty making design decisions. And so far, we haven’t been able to find anyone with an MCM mindset locally (designer, contractor, etc) to help.

Our immediate issue is in our living room, where we have exposed beams on a high angled/sloped ceiling. There is currently no insulation up there, and it is desperately needed, but I hate the thought of losing the look of the exposed beams. Our current plan is to insulate and drywall the ceiling flat, then add faux beams. We also plan to replace 2 ceiling fans with MCM style pendants and remove or replace existing track lighting, possibly adding recessed lighting instead. If we do faux beams, we need to determine how many and what size. If we do less than the exact size and number of beams that we currently have we can save some money, and it would still have the same effect, but they won’t match up with the exposed beam ends visible on the exterior of the house. Is this a big no-no? It wouldn’t be too obvious since there isn’t a contiguous view of the beams inside to out, but there are 3 high windows that could allow the interior beams to be seen from the exterior of the house. Oh gosh, does any of this make sense??

Please let me know what you think. We’re at our wit’s end, paralyzed by indecision! 🙂 I’m happy to provide more pics and more info – anything needed. Thanks! jen

Thanks, Jen for your nice comments about the blog, and for sending in your question. I’ll open it up to readers… But this time, I’ll start with my thoughts:

Readers, what do you think Jen and her partner should do? Beams? No beams? ….  ?

Categoriesmodern Readers and Their Kitchens