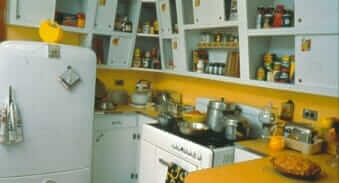 First in a series of posts spotlighting mid-century house museums
“The 1950 House” is a complete, original mid century home moved onto grounds of the Shelburne Museum in Shelburne, Vermont, and now open to the public.  Frank and Helen LaFlume, the original owners, included the latest technology when building their new, 1000 sq. ft. home in 1949. Like millions of other couples after World War II, they were final able to purchase a home — and buying this prefabricated model was easier than bringing construction materials to their 200 acre farm and building from scratch. They chose a ranch style house, with an attached garage for their 1939 Chevrolet — which is also part of the exhibit.
. 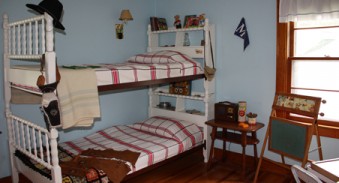 The LaFlume’s home featured central heating and air conditioning, modern bathroom and kitchen appliances, and many clever built ins. Check out their amazing yellow kitchen. Those countertops with the full 18″ yellow laminate backsplash are definitely an eyeful. I’m really loving the diagonal shelves — the angle of the camera gives it a very Alice in Wonderland feel.  The bunk beds (above) look very clean and crisp. Notice the little lamp for the child in the the top bunk… and the chalkboard is also great. The LaFlume’s house has white siding — iconic 50’s style. The 1950 House opened at the Shelburne Museum as special millennium exhibit in 2000.
. 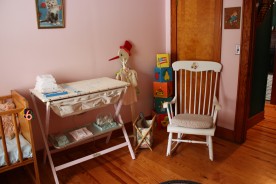 The Shelburne Museum has an amazing 39 buildings (not counting the boat), and two historic houses from the 18th and 19th century. You could easily spend a day, heck a whole week, at this place. Special thanks to Julie at the museum who gave us access to their images.
Read all of our stories about historic mid century homes you can visit here.
Categoriesvacation spots, historic homes, museums