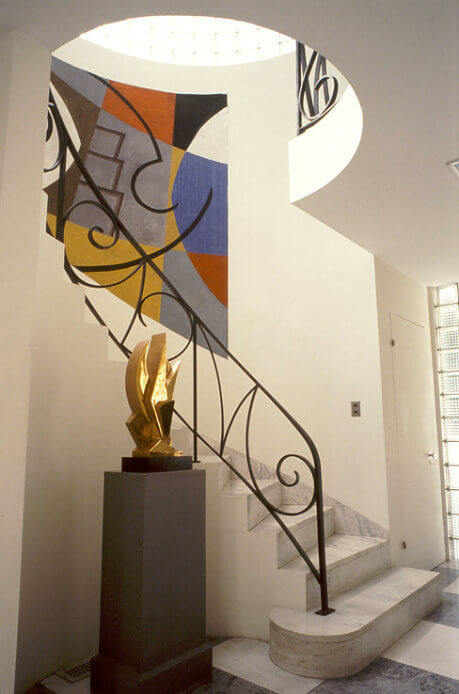 Fourth in our continuing series of mid century historic home museums open to the public.

During my recent visit with Aunt Pam she took me to a historic home just a mile from her house — The Frelinghuysen Morris House & Studio. Located in Lenox, Mass., this estate features features the home built by George Morris and Suzy Frelinghuysen in 1941-2, which is attached to the studio that George built before they were married, in 1930. Together, these spaces comprise a gorgeous example of International Style — and the first “modern” home built in New England.
. 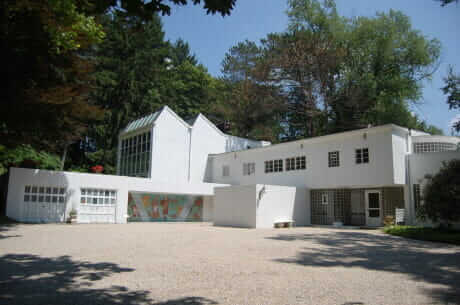 After we parked the car we hiked for a third of a mile on a nice trail through the woods surrounding the estate — the setting is another great feature of this home tour… the woodlands and what Aunt Pam calls “Faerie Gardens” make the $12 ticket all the more worth it. Our tour began right out front. Our guide was Kinney Frelinghuysen, Artist, Director of the Museum and nephew of Suzy. He was full of information and could answer almost anything. It is great to know he is there to help his family’s history live on. Some background: The Morris family was very well known in America in the early 20th century– one member even signed the Declaration of Independence.  George Morris studied in America, but traveled to Paris frequently with his friends. There he met great artists like Braque, Brancusi and Picasso – he was forever changed. At the peak of the modernistic movement, he moved to Paris and began studying under Léger.
. 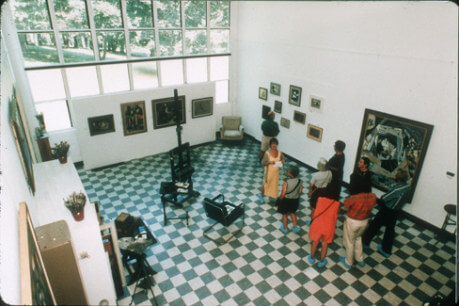 When George returned home in 1930, his mother asked him to remove all his “ugly” modern art from the family mansion, so he built a Studio — the first element of today’s estate — in the forest woodland near his parents’ estate. George hired designer Le Corbusier and modeled his new Studio after Léger’s studio in France. Over the next few years George traveled back and forth to Europe (often staying at his mother’s town house in Paris). He spent most of his time, and money, buying art from his friends. While traveling he met opera singer and artist Suzy Frelinghuysen — they married in 1935.
. 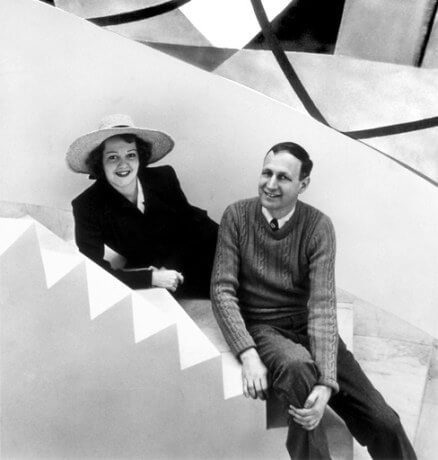 Now joined in matrimony, George hired John Swann, a local architect, to design a house connected to his existing Studio. Construction began in 1941, which was a hard time for abstract artists, but George continued undaunted. The couple built a two-story, stucco, International-style house, with glass blocks and many windows. They went so over budget that George had to sell one of his Picassos.
.
Our tour:
. 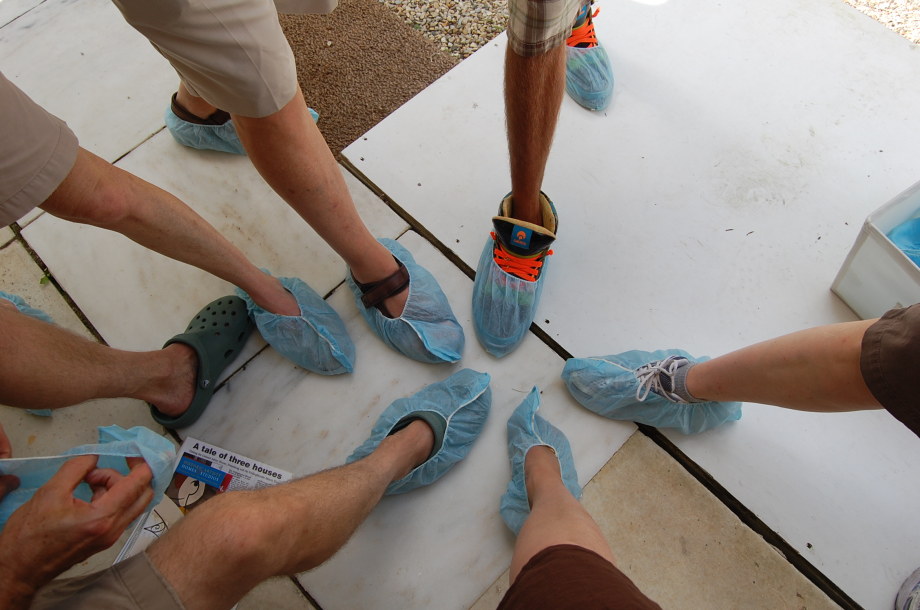 We were led into the house, but not until we put our booties on (gotta protect those floors).

We stood in the foyer at the bottom of a wonderful spiral staircase — both it and the floor are made from local Lee, Mass., marble. An iron rail was added later to help “after a few martinis.” Another fresco curves along the wall going upstairs. Every room has a great view of the spacious garden out back. Under the stairs was a convenient mini bar. Every space was used in the house so it gives off a minimalist feel.
. 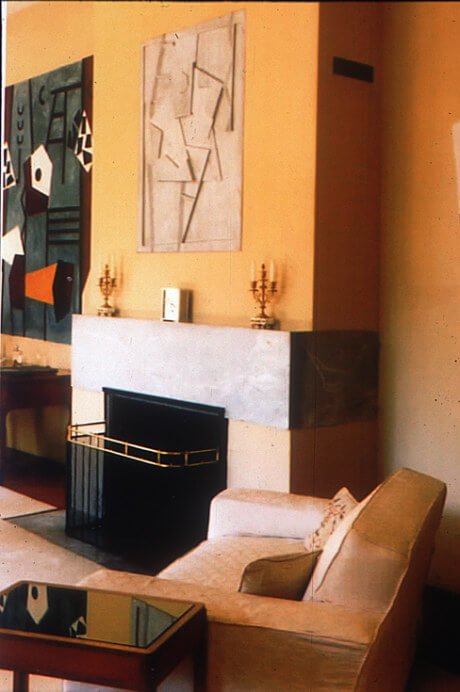 Next was the living room in which George had control when it came to decorating. Oh my. First, I counted at least 21 windows. There were pinch pleated drapes, built in bookcases up to the ceiling (filled with original books) and floor tiles made from Argentine leather — complete with brand marks. Two more frescoes, painted in warm colors with  inlaid glass done by George, flanked either side of the stone fireplace. The pair of zebra print love seats look perfect in this room, and a Léger painting in the corner only cost Suzy $20. It is worth some $40,000 today.  From there, we crossed the hall into the dining room, which Suzy decorated. She created four frescos for this room- all in cool shades of blue. The walls were in shades of gray and there were lighted, built-in shelves on either sides of the windows.  A smaller room off the foyer, used by Suzy as a studio before she built her own, holds a Picasso. George was the first and only owner, and he frequently sought inspiration from the work. Next, we were led up the marble staircase and into the hallway. Above the stairs is a metal streamline light fixture and streamline knobs are on all the doors — the curvy lines mimic the curvature of the stairs.
. 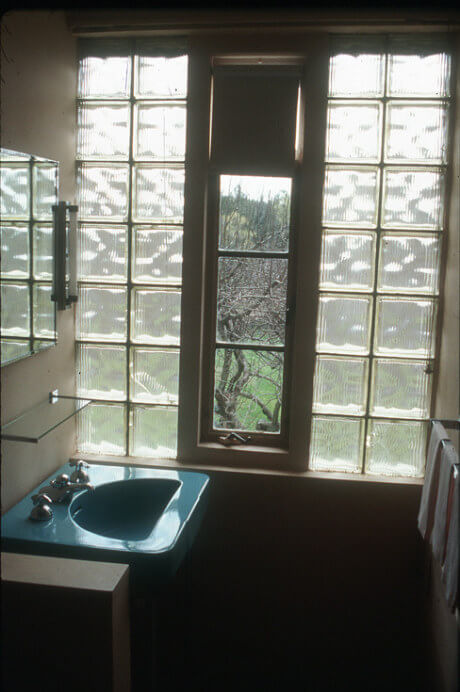 The guest bedroom has large French antiques (that most likely came from Suzy or George’s parents) and a connected bath with Crane toilet, sink, and hardware. Suzy’s bedroom features a mid-mod coverlet on the bed, and built in wall cubbies. She painted trompe’oeils on the walls- columns, cubbies, trim, even a painting of Paris. Off the bedroom were her own bathroom and a walk-in closet. Every bathroom is Crane and a different color. I had never seen a yellow inset tub like the one she had (sorry, no picture). A three piece lighted mirror hangs over her yellow sink with beautiful thick glass legs. Before you enter the studio you are in George’s bedroom. In here there were built-in dresser drawers (continuing the minimalist feel), and continuation of the Battle of Indians fresco outside in a painting above his bed. His bathroom features a Crane sink and toilet with a contoured marbleized seat, large glass wall tiles, and a beautiful linoleum floor.
The final door led us into the original studio built in 1930. At first glance I counted 35 windows on the north facing wall. Skylights go up ¾ of the ceiling, a rare George Nelson desk sits in the corner, and a plexi-glass floored loft looks overhead. Suzy’s studio, built later, is a short walk from the house. It is a quaint brick building, with large arched windows and large skylights — much more classic than George’s. George and Suzy spent most of their time in New York but their StudioHome was great to escape to during the summer. We exited the studio and went on our own little tour of the gorgeous gardens where. With the greenhouse, spring house, and lakefront, it looked like Aunt Pam had died and gone to heaven.
. 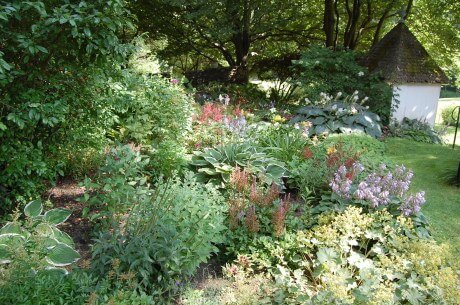 The House & Studio opened for tours in 1998 and makes for a very successful day. Just ask me or Aunt Pam, you will not be disappointed! Thanks again to Kinney Frelinghuysen for such a wonderful and informative tour — click the following link for more info about the: The Frelinghuysen Morris House & Studio.
Read all our stories about historic mid century homes you can visit here.
To view slide show, click on the first thumbnail, and move forward or back via the arrows below each image.