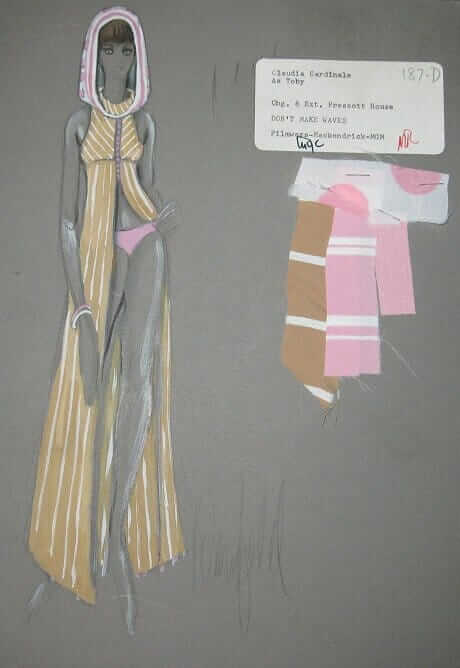 In three years of daily blogging, this is the first news from a reader who seems to have struck bona-fide estate sale treasure. David’s booty: 10 vintage Donfeld costume sketches done for star Claudia Cardinale for the 1967 movie, “Don’t Make Waves.” This apparently was a comedy about a New Yorker — played by Tony Curtis — dropped into free love surfer heaven southern California. David came across the sketches at an estate sale. Not only are they super cool Hollywood memorabilia, it turns out they seem to be worth a couple of thousand dollars. Each. For your vicarious thrill of the day — and a slide show of the 10 sketches — read on for more of David’s story …

To view the slide show, click on the first thumbnail, and move forward or back via the arrows below each image. You can start at any image.
David and I had a long conversation back and forth via email, here is a slightly edited version. David says:

I’m a “junker” from way back, but a more recent estate-sale regular. My mom used to drag us kids to yard and garage sales starting when I was about 5, and I’d been to estate sales before, but most of my “junkin” has been at Goodwill and the like. Since I’ve been teaching, I have the summer off and can go to estate sales on the “good” days during the week, and it has just grown from there, now I go pretty much every weekend!! I love flea markets too, but the prices always seem high, I prefer to find what I like there and then look out for it at yard & estate sales! The sketches are probably my biggest find ever!
.
I walked away from them at first, but then ran back and got them, and the more stuff I found the more happy I was that I did!
.
I wish I knew how they wound up away from Hollywood, I don’t think the house where I bought them is where they came from. Donfeld died in 2007, so they could have come from his estate, but I figure it’s more likely that someone else in connection with the movie took them home as a souvenir, maybe a design assistant or something.
.
I’d never heard of the movie, or of Donfeld, but he’s evidently quite famous. He was nominated for four Oscars! He did the costumes for Bette Davis in Dead Ringer, and for the iconic 1970’s Wonder Woman series!! He also did costumes for Jill St. John in Diamonds are Forever, Ann Margret in Viva Las Vegas and Natalie Wood in The Great Race and Brainstorm, which is the movie she was filming when she died. Interesting, considering that the movie my sketches are from co-starred Sharon Tate, kind of a dark connection, eh? I’ll let you peruse the links and discover more! If you google Donfeld you’ll find a ton!
.
One other thing I noticed is that the labels state that these are for the character of “Toby,” but her name in the movie is Laura. That must have been changed, which would mean these are from early in pre-production.
.
I love that they are signed-off on, I can just imagine all these men sitting in a smoke-filled board room discussing the film, kind of “Mad Men” style. You can also see that they each have one set of tack holes, just one in each corner, so they were most likely put up for that film and never displayed again. They’ve clearly been out of the light because they are in such great shape.
.
The very first thing I plan to do is buy some archival sleeves for them, they are in amazing condition and I want to keep them that way, five of them still have the fabric samples attached! I will have them appraised, but I don’t have any immediate plans to sell them, of course I will entertain offers if anyone wants to get crazy!! 😉

In subsequent emails, David told me he found an appraiser, who, initially, has given him the insurance value, which involve lots of zeroes. Estate sale treasure hunters: Keep your eyes open, you never know what the retro decorating gods will send your way.