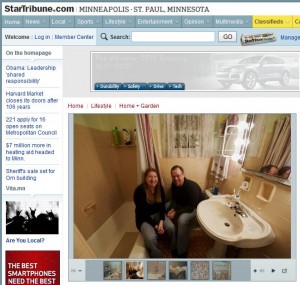 Meanwhile, there’s Fiona’s husband. Joel. He got sucked into the pink bathroom vortex because of this most recent Minneapolis Star-Tribune pink-bathroom-star search. He seems to work for some tech company. And he writes a blog for them. And golly geez, hasn’t he just gone and made a brilliant point about how social media has made this whole thing possible. And it’s quite funny. Yes, indeedy, it begins:

Thanks to social media, I took two hours of vacation last Monday to scour my shower to a glistening shine. I went inch by inch with a toothbrush and despite what my dentist would say, I did draw the line at flossing….

He then does a brilliant job recounting the relatively rapid intersection of flickr, facebook, the blog, and the newspaper, adding:

What’s really interesting with this story is how social media helps you make connections—often more quickly than traditional means of communication—and those connections allow you to network in ways that may have been previously prohibitive.

…if that isn’t cool, I don’t know what is. Actually, that my wife and I could become “retro cool” and hip without doing anything is much better.