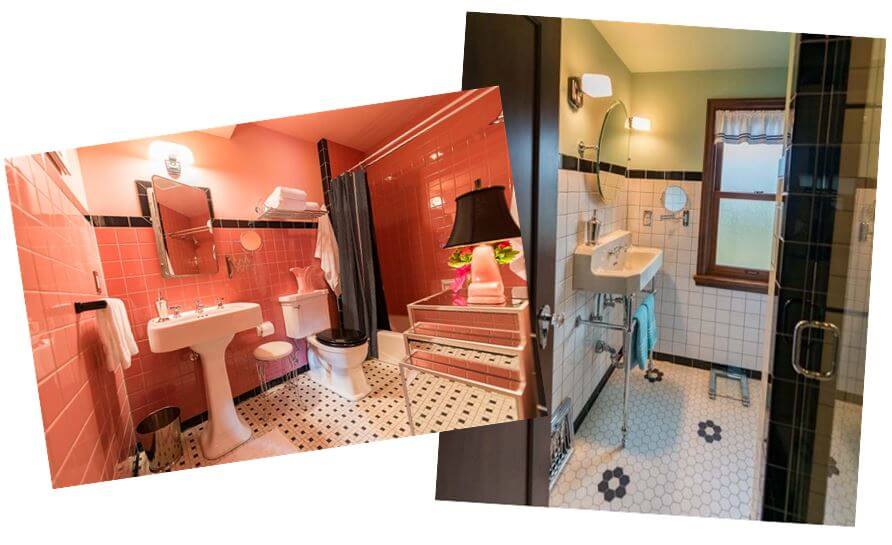 Yesterday we saw Wren & Willow’s kitchen renovation, and heard from owner-contractor Laureen Skrivan about her company’s plan to remodel it to rent on Airbnb. Today let’s look at the bathrooms — all-new, but designed to look like they’d always been there. 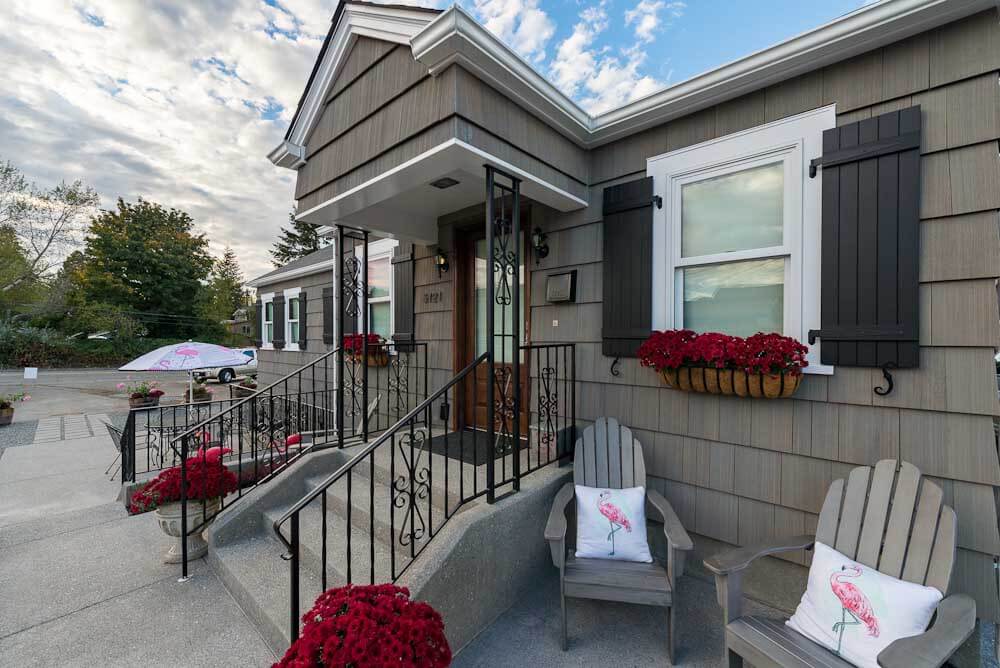 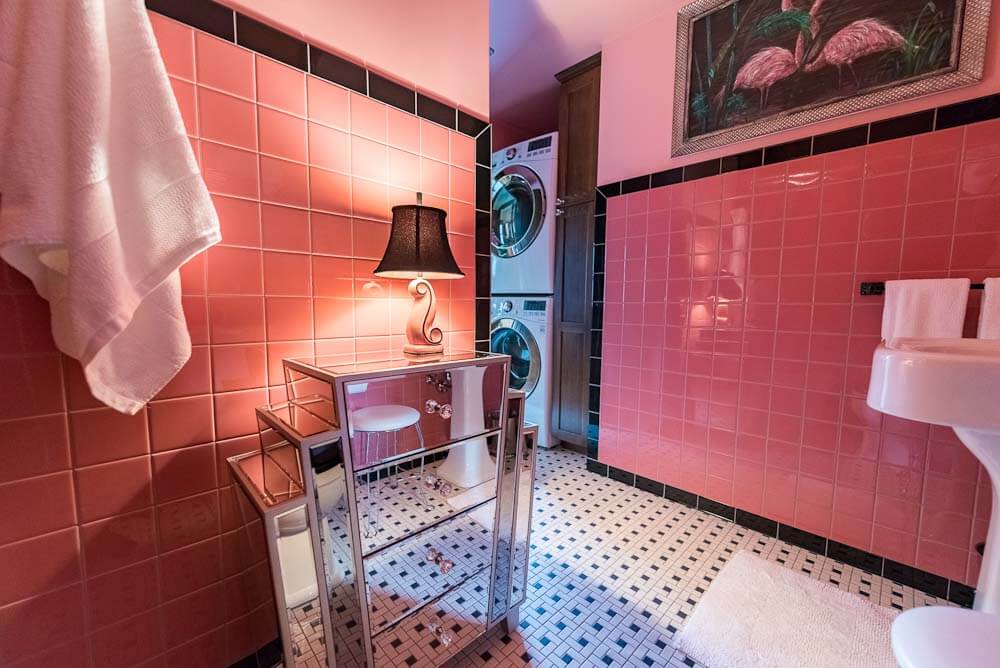 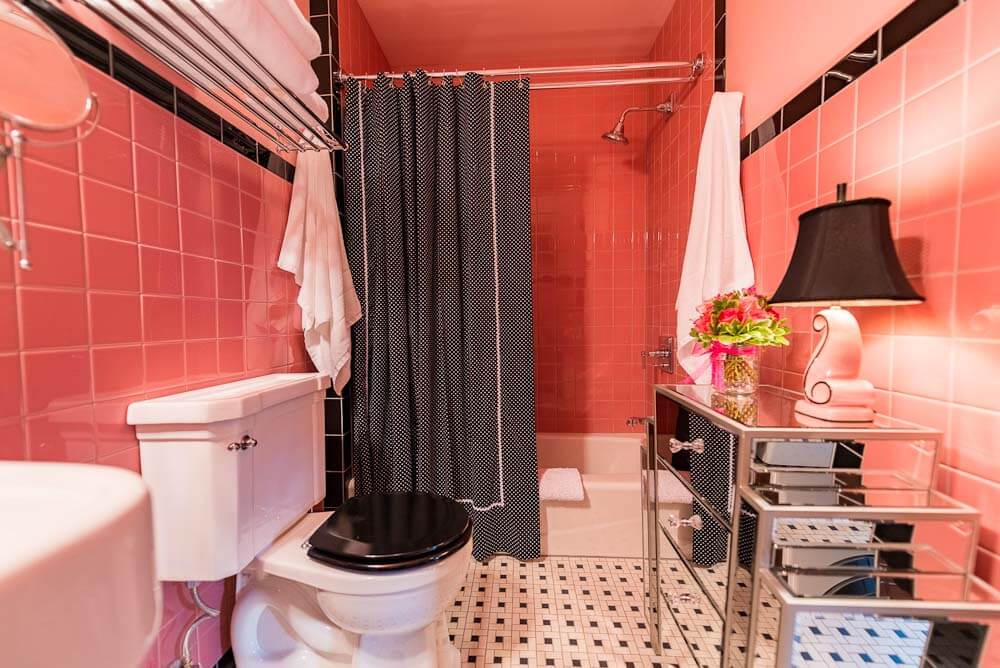 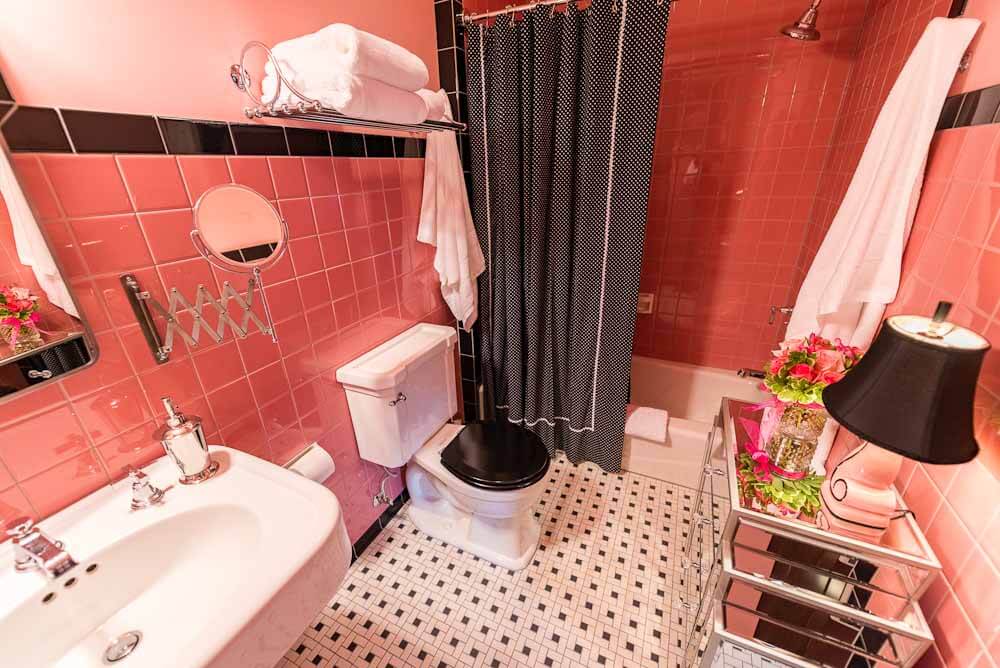 Of course, there is a pink bathroom! And this one is the stuff that many folks’ dreams are made of: Pink field tile with black bullnose trim… a black-and-white pinwheel tile floor… a vintage sink… and playing up the glamorous 1940s, a mirrored storage cabinet. Laureen says the tile is American Olean “Antique Rose.” I’m going to go check it out, stat!

All photos by Aleks Akinshev of the Wren & Willow team. 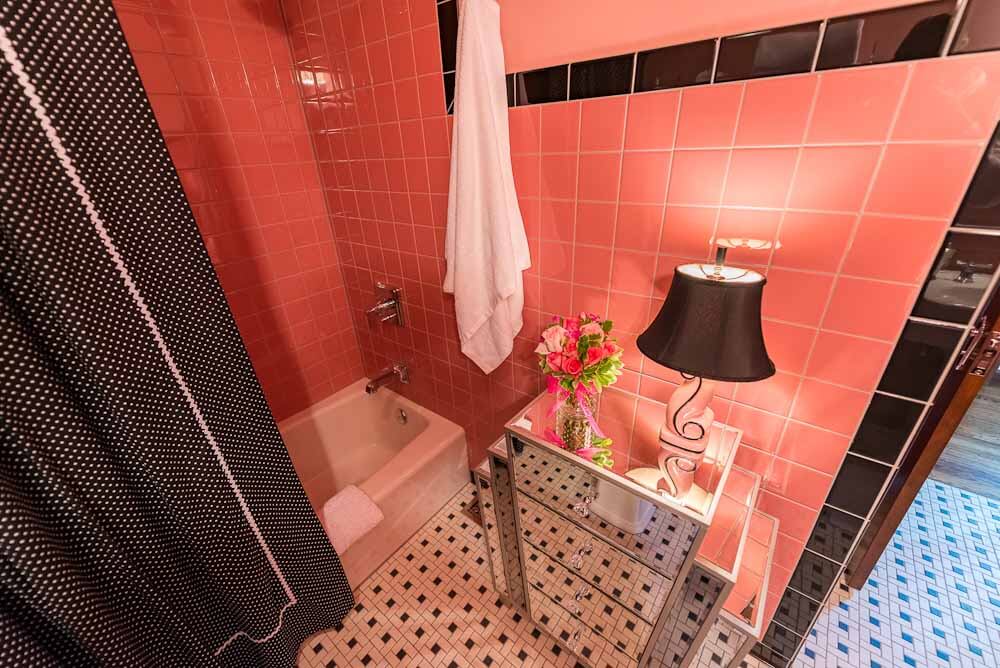 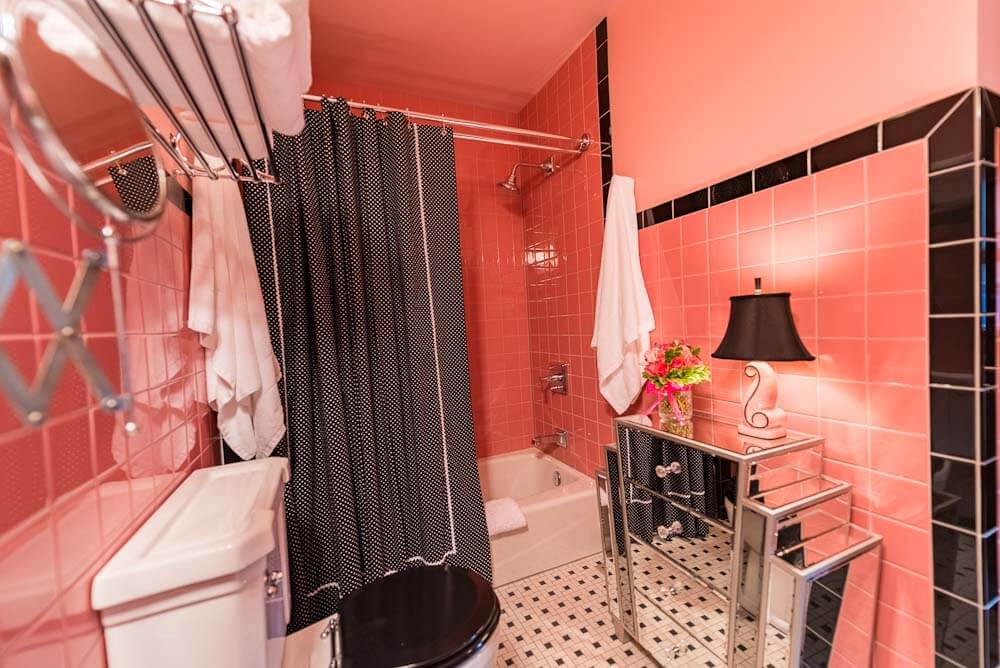 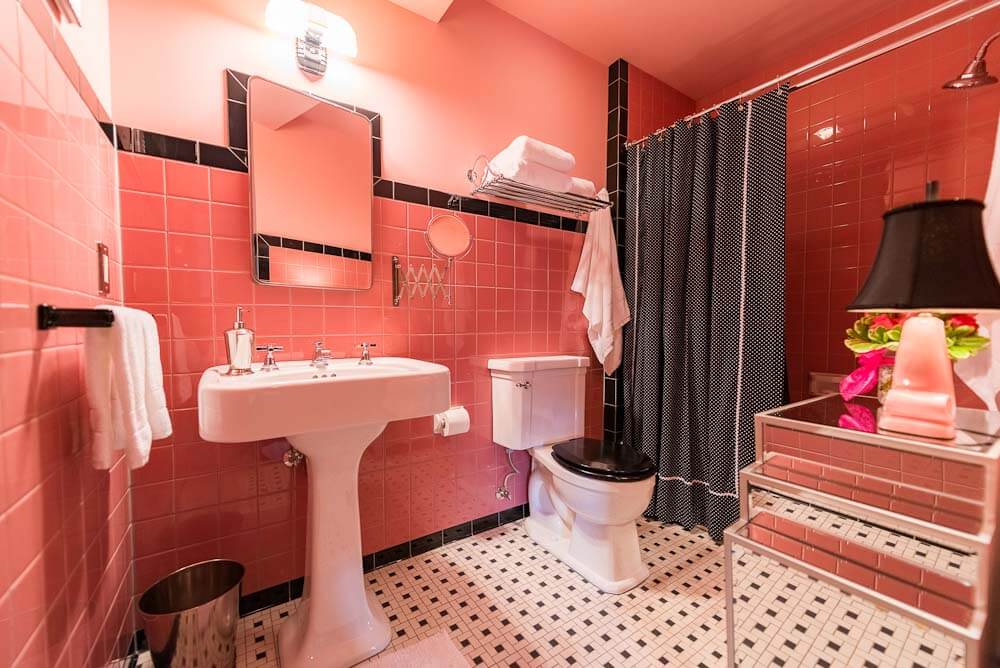 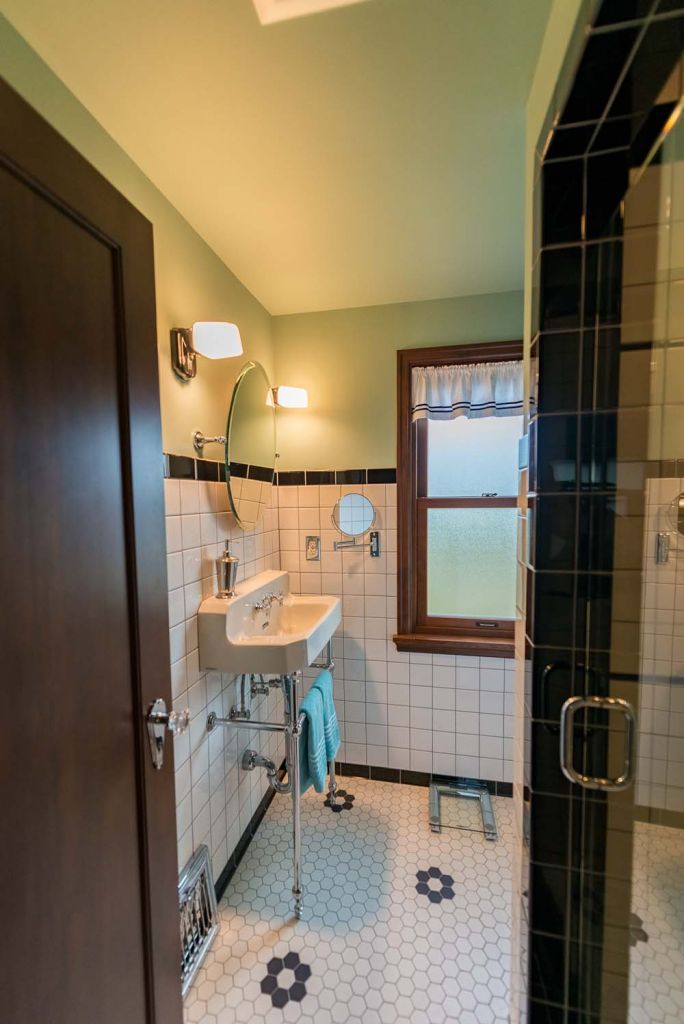 Laureen got help with the sink from one of Retro Renovation’s longest advertisers with the sink in the master bathroom. She said:

DEA Machineries supplied us with a 1940’s American Standard wall mounted sink that was completely refurbished. Its unique size made it a perfect fit for the small master bathroom.

We also saved the wall-mounted heat vents original to the house. Our local classic car restorer sandblasted the vents and added a chrome finish. The vents, along with the original front door hardware, were given a whole new life. 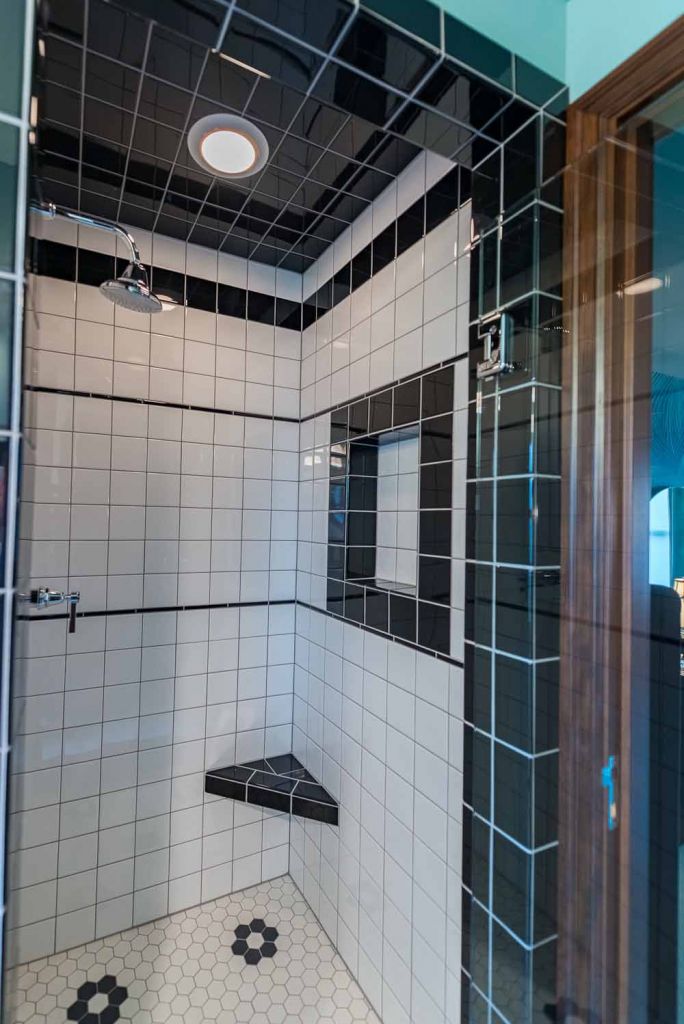 More about Laureen and her company Wren & Willow:

Laureen is a super interesting person. Check out the Wren & Willow’s “Story” page, and you will see that she started just 10 years ago as an interior designer… but within just two years decided she also wanted to become a general contractor so that she could do even more to help her clients. Wren & Willow the general contracting firm opened in 2008. Success came fast:

The company continued to grow, and it became apparent that Wren & Willow had outgrown its office space. In 2011, the company purchased a commercial building on North Pearl Street that was built in 1917. Laureen saw the building’s potential and designed the building to restore it to its original 1917 look and feel, which included using reclaimed wood throughout the building, while giving it a modern touch which included commercial kitchen appliances and a state-of-the-art sound and lighting system. The building took two years to complete, and Wren & Willow moved into the restored building in March 2013. The Wren & Willow office building won the MBA award for Best Commercial Project in Pierce County, the State of Washington, and the Western Region of the United States as well as Best Design through the national Design Professional’s Award. 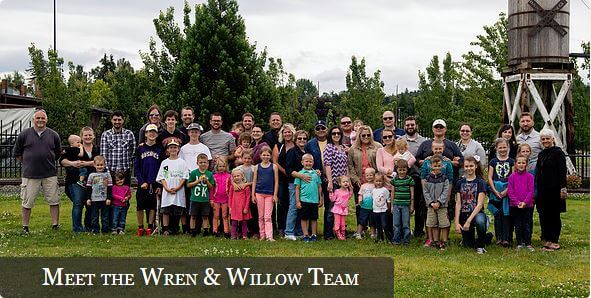 Wren & Willow continued to grow at a rapid pace. The company grew from two employees to 18 in just a few short years. Laureen’s reputation among her peers grew, and in 2014, she was elected to the highest position of the Master Builder’s Association of Pierce County as the first woman president in its 69-year history.

Want to see more of the Wren & Willow House?