The official sales listing for Adrian Pearsall’s 1964 house in Forty Fort, PA, is now “live” on Sotheby’s. When I first saw and wrote about this house <– more photos here, I was so stunned that I could not even imagine what it would have been like to grow up there. So, I asked Jim for his recollections, holding my breath the whole time hoping that he would not be “bothered.” Quite the opposite: Jim… then brother Jed… then sister Cindy Pearsall Sussman… each were amazingly generous in offering memories of living in this wonderland. I am kind of speechless reading, and then thinking, about this little piece of paradise their parents created for them.

Over the past several days I have have conversed by email with the three… Following are their memories about the house and about the life that their mother Doris — known as “Dorie” — and father Adrian created for them….

First, I heard from Jim Pearsall, who also is the listing agent for the house:

I am the oldest of three children and I was 12 when we moved in. It really didn’t occur to any of us that the house was all that unusual. the neatest thing was that the garage was attached to the house. It wasn’t until we started inviting our friends over for sleep-overs that we understood how different it was. There were cool things that no one had like the pond that you had to cross to enter the dining room and the water fall (that did not last very long because it was just to noisy and Dad said it always made him feel like he had to go to the bathroom during dinner!)

The indoor pool section was not built during the first phase, but once in place, it was spectacular. The skylights above it had to be lowered by helicopter and that was quite a spectacle.

The entire driveway had heat coils underneath it so that we wouldn’t have to shovel it, but after Dad saw the first electrical bill after a snow storm, he decided shoveling was still a necessary evil. Mom and Dad didn’t do a whole lot of entertaining, but when they did, they did it in grand style with as many as 500 people attending. When my sister was married, Dad drained the entire pool and installed scaffolding to support a dance floor. We had several pianos, so in one end of the house they would have a jazz pianist and at the other end of the house a different type of music.

My mom’s kitchen was grand by that periods standards. I love to cook and I eventually owned several notable restaurants and that’s where I got my start. As you mentioned, the ice cream bar was probably the single most unusual and talked about feature, but for our family, it was just plain logical. None of us was over weight and we are all fanatical about ice cream. Our family room with the round fire place was surrounded by bean bag chairs (my father invented them) and that was the only furniture except for my grandmothers chair in that room. You know the big ice cream containers that are at the ice cream stores? well, the fountain cold hold six of those and we, as a family, could polish those of in just a couple of weeks! Dad built the home all on one level with extra wide doors to every room. He envisioned that one day, Mom and he would be in wheel chairs and the extra wide doors would eliminate scrapped kunckles.

Next, I heard from Jed Pearsall:

The house was not built as a showcase for design, but a space for creativity and fun.  Everything was meant to be lived in and used.  We had a huge family room, where I was always setting up gigantic train sets and slot car sets. With an indoor/outdoor kennel, we had an amazing assortment of pets– always big dogs, but also birds, monkeys (I had four as a teenager), and even a lamb living inside the house for a while.

Outdoors, it was a kid’s dream–  a full playhouse (of course hand built by my dad), a tennis court that Dad sometimes made into a skating rink in winter, archery sets, and a huge backyard for any ball game you could imagine.   In the living room, we even  had the actual giant piano from the Tom Hanks movie, “Big”.  It was (and still is) a house that is meant to be lived in– always full of life and fun, with enough space to create anything and dream big.

BTW —  It really warms my heart to see such great letters written about the house from your readers.  My dad would be embarrassed by it all — I think he was a genius in his design, but more than that, he is about the most humble person you could ever meet.

Thanks again for sharing the pictures, 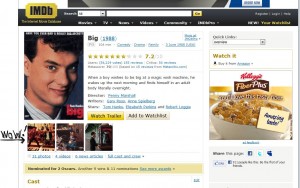 The dancing piano from Big?!! Of course I had to ask Jed what happened to that. He responded:

My Mom always worked magic at bringing things into the home that would make one of us happy– and when my dad saw that movie, she knew we had to have it.   It was so big, yet it still fit well in our living room.  But it was tricky to make a good tune, and even a little dangerous to play (jumping from key to key can be slippery), so we eventually sold it back to the builders and I think now it is at FAO Schwarz in New York.

Then, I heard from Dr. Cindy Pearsall Sussman:

Hi Pam!  My brother Jim asked me to write to you, giving a little bit of a taste of what it was like to grow up in the house my dad designed.  I was about 10 years old when we moved there.  I remember going to the empty lot before it was built and thinking the lot was enormous (it was roughly 2 acres I think).  Sometimes I would bring a picnic and just sit there, dreaming of the house that was to be built.  But the actual house surpassed my wildest dreams.

At first, living in the Forty Fort house was like living a fairy tale. My room was beautiful!   I had a white canopy bed that my dad made, complete with blue flowered curtains that I could pull closed, just like the ones we had seen in Williamsburg!  I had a built in desk whose front pulled down to hold all my school supplies and a Craft Associates child-sized table for my dolls and me.  I even had my own bathroom (no more sharing with my brothers).  We had a long, wooden, library table (also made by my dad I believe), big enough for us all to do our homework (plus friends) at the same time.

In the library, I could impress my friends with the movie screen that came down from the ceiling with a flick of a finger.  And in the foyer, we had a pond, stocked with gold fish (later filled in with soil and live plants) with marble stepping stones that crossed it.  We loved jumping over those steps.  Opposite the steps was a gorgeous curved marble wall that held a brass sculpture (modern of course) and was set up to have water flowing over it.  (I had my wedding party pictures taken in front of that wall many years later).

After dinner and homework, we would gather around the round fireplace in the family room, eating ice cream we had just scooped up from our soda fountain. 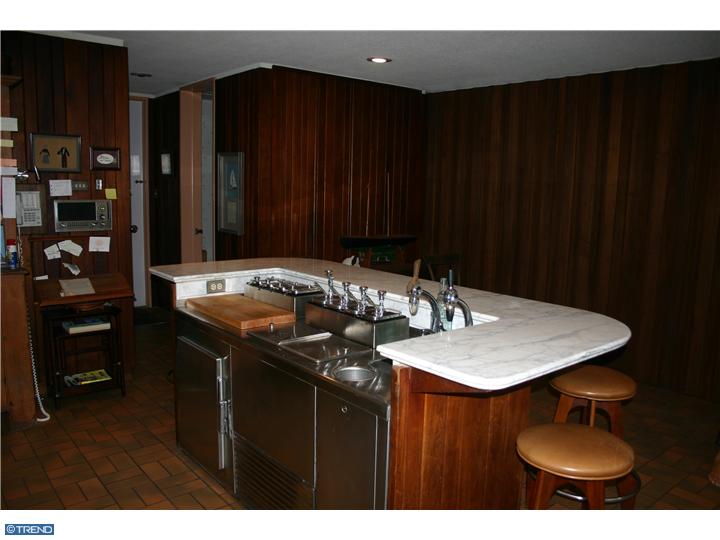 My mom always kept the soda fountain stocked with huge containers of ice cream and all the fixings.  We would grab our dishes and plop into the deep cushy bean bag chairs my dad had made and watch TV.  It was heaven.

One summer, a couple of my friends and I had a day camp for a small group of our parents friends’ children in the house.  It was the perfect set up!  We gave swimming lessons in the indoor pool, my brother, Jed, gave tennis lessons, and we used the player piano for music sessions.  The long, built-in shuffle board gave us plenty to do on rainy days.

In later years, we probably became a bit jaded and our extra-special house was simply, our house.  However, it still amazed anyone who hadn’t seen it yet.  I remember bringing a boy friend home from college and he stopped short in the bottom of the driveway.  I said, “Just keep going. This is it.”  He said, “This is your house?  I thought it was a library or something!”    It did tend to be a bit intimidating at first.

We had some great parties in that house!  Many times, my mom would plan huge Christmas parties, and invite friends in shifts (those with small children would come in the early afternoon).  Santa was there all day, and the ice cream bar was open for business!  We even had carolers strolling through the house.

We would spend hours in the days before the party cutting out  gingerbread cookies on the long kitchen counter.   Dad, being production minded, would make trays of all one thing. The rest of us would do it hit or miss.

My “graduation from medical school” party was held in our back yard.  It was an old fashioned picnic and everyone came in big hats or straw boaters.  Each guest got an individual picnic basket filled with gourmet goodies (most of which my restauranteer brother, Jim, had made), and we sat on blankets in the back yard with the Barber Shop Quartet seranading us.

Several years after the college boyfriend came to visit, a different boyfriend (now my beloved husband) came to Forty Fort to ask for my hand in marriage.  My dad took him into the den.  This was a lovely room with dark wood paneling on one wall and natural stone on the other.  It had its own little bar and refrigerator (both rarely used).  My dad took pity on my poor, nervous husband-to-be and offered him a beer.  Thankfully, all went well after that! 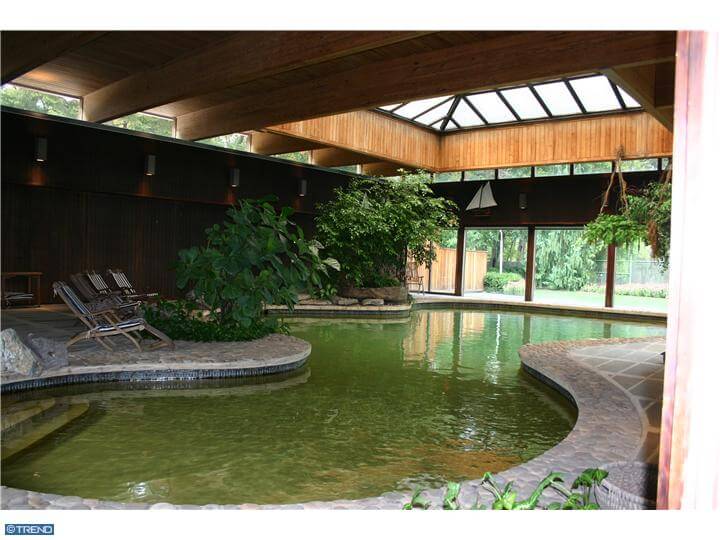 Our wedding reception was held in our house.  It was the most gorgeous wedding receptioin imaginable!  Dad removed the window panes from one end of the pool room and attached a tent for dancing.  He drained most of the water from the pool and built a scaffolding to provide more floor space, leaving a 6 foot free-form area that he surrounded with a small white fence.  He covered the whole thing with artificial grass and then refilled the pool so that we were all sitting at tables surrounding a real pond, complete with  floating candles and water lilies.  LIttle twinkly lights were stewn all over the plants in the room and along the ceiling.  The fairy tale was back! 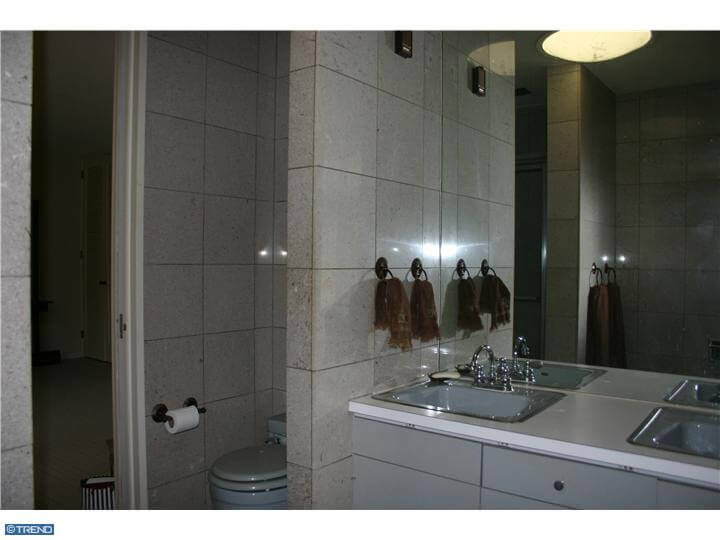 As my parents got older, I realized how prescient my dad had been.  The doorways were all made wide enough for a wheelchair, and the doors slid into wells, instead of taking up space.  The master shower had a flip down stool, and any snow on the driveway was quickly melted away with the built in heaters (I don’t think those are functional any more).  Its only problem is that it was a bit too far from us kids!

I have such mixed emotions writing this to you, Pam.  I have wonderful memories of growing up in the house my mom and dad built and it brings me joy to think about them.  But I will be so sad to see it go.

Thank you for asking.
Best regards,

Wow. Thank you, Cindy, Jed and Jim for taking the time to share your memories of growing up in this house, and for your permission to feature more photos. “Fairytale” — indeed.