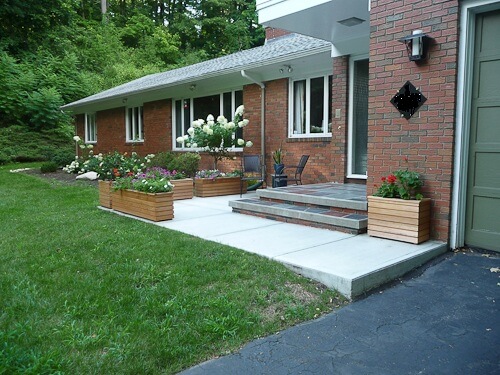 The amazing Cindy is at it again. We’ve seen her house, her bathroom remodel, her Amtico kitchen floor, and her new pinch pleat curtains, and now she shares the new, welcoming entry way to her 1963 home. I love the long, low lines, and the integration of a favorite mid century surface material, random multi-color slate tiles. She also helped design the custom made planters. Read on for more of Cindy’s vintage Sunset-inspired front porch makeover –>

I’ll start with before photo of the front of the house — wild overgrown yews that were surely original to the house.

After all the work, above and below: The new front entry. 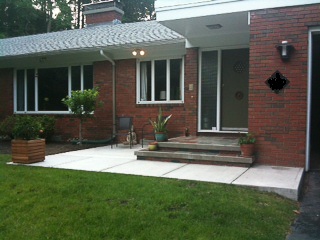 It was entirely rebult, the stoop area is slate – my favorite material and so appropriate to a mid century house. I then had a concrete slab poured around it. inspired by a photo I saw in a 1960s landscaping book from the library. I think it was one of those Sunset books…. 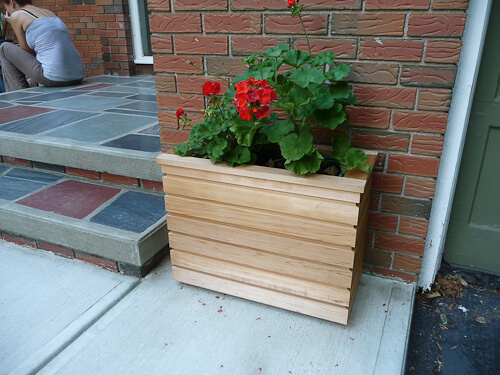 The inspiration for the planters came from a restaurant I went to in the Azores last year. I searched your site, local garden centers and googled wooden planters numerous times, but found nothing that satisfied me. 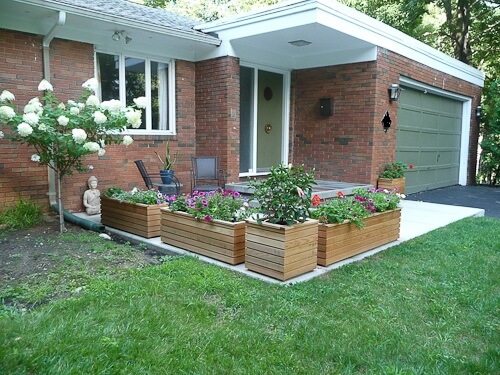 So I had them made by a local cabinet maker friend. They add a bit of Asian feeling I wanted for this front area.

Great job, Cindy — I love the new expansiveness of the entry way. You can sit out, have a cocktail, and watch the neighborhood go by — but the landing still has a strong geometric feel that totally suits the modern design of your home. Interestingly, I have read that midcentury ranch homes were designed in a way that they would be “open to nature” — but that generally meant open at the back. I like that you have added this friendly touch to the front of your house, but in a way that is harmonious to the front facade. The landscaping looks “friendly”, too. I have several of those hydrangea trees — a very satisfying cultivar in our part of the world, it blooms all summer long. 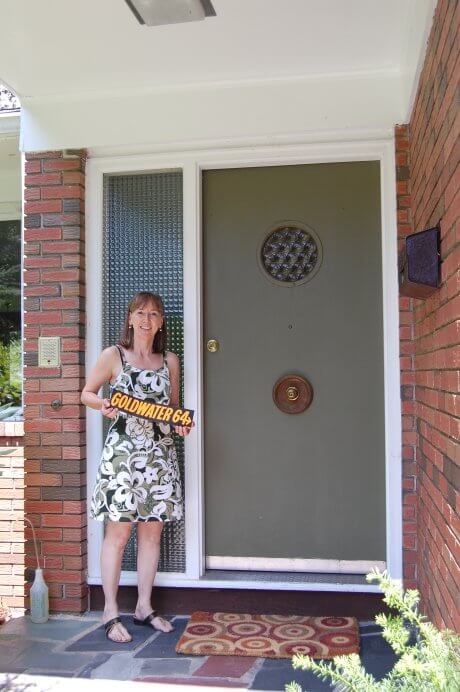 I have a photo of Cindy on her old/original landing (above> from when I first visited several years ago. You can see that the random multi-color slate tiles were original to the era. Cindy has replaced them, including with a tidier squared-off design on two levels. Random multi-color slate tiles are abundant in Massachusetts – and they are relatively affordable. The concrete platform below, which Cindy designed, kind of “mirrors” the shape of the garage roof adjacent (nice touch, Cindy, you have “the eye” for sure!) and adds visual contrast. The concrete is also reduced her cost (compared to laying more tile), I assume. Be sure to work with professionals or to really know what you are doing if you attempt to do this kind of job yourself: Up her in northern climates, we can get cracks in concrete due to freeze/thaw heaving if the underlayment and binding (?) of the concrete is not done properly. You also will want to talk to a professional about the pros and cons of sealing concrete.