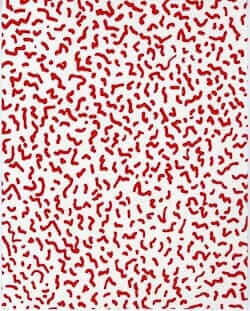 Here is another set of products from the past — still available today — with a fascinating history: ‘Memphis’ style laminates designed in 1978 by Ettore Sottsass, “the greatest Italian designer of the last half century.” These laminates are still offered by Abet Laminati. This is not necessarily a name familiar U.S. consumers, but Abet has been in North America 20 years. Moreover, it offers a very large selection of laminates that you will want to study intently, especially if you are looking for the widest possible variety of colors or patterns. Back to these Memphis-style laminates, though –>

UPDATE June 2016: Not sure if these patterns are still available in the U.S. — but I found some here in another country (I think). If you want ’em — ask, and see if they can get them for you.

In addition to selling the Sottsass design, Abet Laminati also introduced two other series of Memphis-inspired laminates in the past decade: The Mendini group designed the Serigrafia line in the early 2000s, and Paola Navone created the Serigrafia Longline designs in 2008-2009. Many of these are soooooo cooooool. I could definitely see using them in a colorful 1960s, 1970s or 1980s house… in a plain ole hippy house of any era… or in a contemporary “green” house. Yes: I have this theory that laminates are just fine as a “green” material. I will go into this at length at some point, but my hypothesis in a nutshell is: Money is the best proxy for carbon, ergo laminates, which usually cost much much less than solid surface countertops, may actually result a lesser carbon footprint, cradle-to-cradle. Stay tuned, though, I needs to do more homework to see if any manufacturers have completed robust, verified LCAs.

Another reason these laminates are so pretty: They are printed via silk screening. I think this gives a different, kind of “softer” effect, compared to digital printing. Abet Laminati sent me 8″ x 10″ samples of the Sottsass Bacterium series, and I believe I can see the difference in the softer edges of the print compared, say, to the sharper-edged boomerangs on my Formica countertop. This may not ultimately made a big difference in a purchase decision, but I like understanding the artistry. Abet Laminati’s description:

Serigraphy is a stencil method of print making in which a design is imposed on a screen of silk or other fine mesh, with blank areas coated with an impermeable substance, and ink is forced through the mesh onto the printing surface. Reproduced on the surface of the laminate, the serigraphy paints the image of a canvas…

If you are a daily reader, you can tell from my recent posts that I have been digging into new (for me) design history of late. The “Memphis” design movement is one of my recent forays. It was started by Ettore Sottsass and fellow designers in 1981 as a reaction to “strict rational” design tenets they had been weaned on. In contrast, the Memphis (as in the Dylan song) group wanted to reintroduce color and style just for the fun of it. The whole idea caught fire, and the group made a lot of products into the 80s. Sottsass left the group in 1985. Here is a good story for some more background on Sottsass’s career. Oooh, and this one, too, from The Guardian, which explained:

When most people are thinking about retirement, Sottsass reinvented himself as the father of postmodernism in design, by starting the Memphis movement in 1981 – an explosion of colour and energy that was a revolt against complacency and conventional good taste. Memphis was a joyous, entirely unbossy manifesto for design as an emotional expression. It was also an attempt to bite the hand that fed it by gently satirising designers. Design is, in the end, about making us want to buy more things, and Sottsass, at heart always deeply subversive, was highly ambivalent about that.

Interestingly, the Memphis group used laminate in many of their products. One story I read said that, essentially, they were thumbing their noses as an establishment that did not consider laminate to be “cultured” enough. Ha ha, joke’s on them, because now-super-famous cabinets by Sottsass, surely sell for a king’s ransom today. There’s even one in the Metropolitan Museum of Art, although I also recall reading there’s not one stick of Memphis at MOMA. Yet.

Finally, to be academically pure: The 1978 Abet Laminati laminate by Sottsass cannot accurately be called “Memphis”, because it was designed prior to that group’s creation, during his Studio Alchymia years. His experience there paved the way to Memphis.  Golly, I feel so darn smart putting these design movements (with their corresponding laminates) all in a row, I might just bust. Of course, I am likely to be corrected soon enough. Bring it on.

39 Memphis designs in all at Abet Laminati

Where to find all the delicious images — and samples? On their website, of course:

Special thanks to the folks at Abet Laminati for their superb service in providing me lots of information and materials.  Check out all their other laminates, too. Can you imagine: More than 200 solid colors alone!