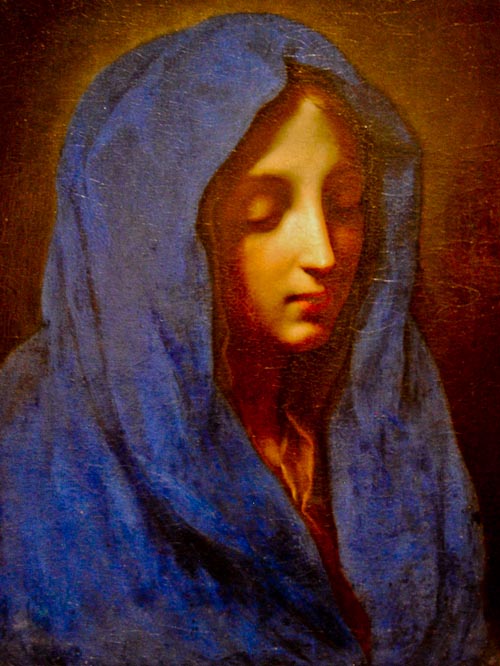 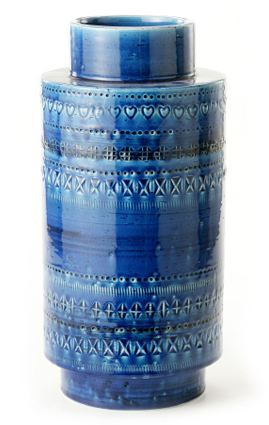 Announcing the Retro Renovation 2012 Color of the Year: Bitossi Rimini Blu. Of course, all colors are wonderful, so this is really just for fun. This also gives me the opportunity to write about a color that is not necessarily on the mainstream design community’s radar, but which I think is classic and fabulous. Yes: Rimini Blu. The color — made famous in a line of Bitossi pottery designed by Aldo Londi and officially introduced in 1959 — is a rich royal blue apparently achieved with a proprietary glaze. Lapis lazuli is a synonym, I’d say. So is Cobalt. And Bitossi says the precedent was actually a 1955 Londi vase in a color originally called “Persiano Blu” — Persian Blue.

How classic is this color? When I was at the Ringling Museum in Sarasota this summer, I took this photograph of Carlo Dolci’s “Blue Madonna” — blue being the color typically associated with the Virgin Mary in Western art. Dolci was a Florentine painter patronized by the Medicis, and he painted this exquisite portrait sometime before he died in 1687.  A classic “midcentury modern” color, indeed — in either the 17th century or 20th century. 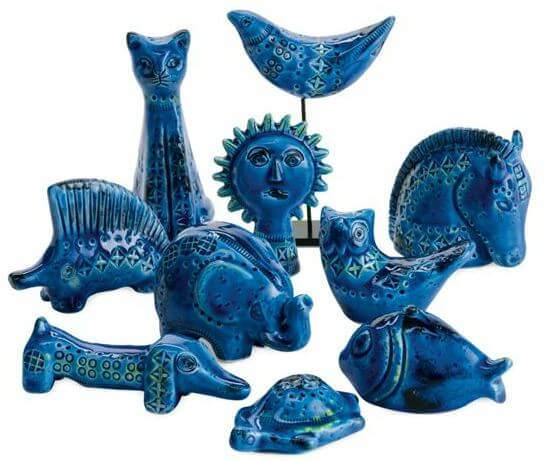 Seven Reasons Why Rimini Blu is my Color of the Year:

More information about Rimini Blu, from a press release for Bitossi Ceramiche, in English as translated by Google:

When and how: the birth of the Rimini Blu collection
Aldo Londi has been the creative soul of Bitossi Ceramiche for 40years: Thanks to him we have the Rimini Blu collection that is officially dated to 1959 when it was firstly cited on the notebooks of Raymor, the American importer and distributor who first introduced Italian home design to the US market. Traditionally this collection is dated back to 1955 when Londi created the big “Ball Vase” in the characteristic Persiano Blue, but only a few years later a group of objects all bearing this special effect and chromatic tone are gathered into a line of products that was called Rimini Blu. A collection with an extremely modern background for the playful and allusive sense of shapes and for this special decorative technique that was conceived purposedly in the post-war years when it had become necessary to find ways to employ in the growing ceramic industry a not trained labor from agriculture.

That’s where this embossed pattern comes from and it combines a easy technique with the advantage of a pleasant and stunning effect, underlined, in the Rimini Blu, by the chromatic effect obtained by putting underneath yellow and black stripes in those points where the blue turns to green. (emphasis Pam’s)

Hey, if there are Italian speakers in this crowd who can provide a better translation, I would much appreciate it!

More to come on Rimini Blu throughout the year. Meanwhile, here are some more resources:

There is always a lot of Bitossi Rimini Blu promoted for sale on ebay:

Beware, however, that what sellers call “Bitossi” or “Raymor” or “vintage” may be hard to pin down, in absence of a true mark, without expert consultation. Scott Lindberg, who runs the arslonga website clarified in another forum, in response to someone helping with identification:

It might be by Bitossi, an Italian manufacturer who produced the Rimini Blu line, but I don’t think this particular example is part of the line in question. The blue glaze is similar, but the impressed designs are not quite right. Rimini Blu was designed by Aldo Londi, the art director at Bitossi, and beside the tell-tale blue-green faience glaze was embossed with a series of shapes: circles with hatch marks through them, series of parallel lines, etc. I’ve never seen a marked piece of Rimini Blu without the circle with the # sign embossed in it.

Just to clarify the name of the line, it indeed is Rimini Blu … not Raymor Rimini. Raymor was a distributer of mid-20th century decorative arts, and had shops in Chicago and New York. They also distributed wares to higher end department stores around the country. Designers from all over the world sold their wares through Raymor, which began as a collaboration between the Richards-Morganthou (where the RAY-MOR name came from) company and famed American industrial designer Russel Wright as a means to distribute his first line of dinnerware: American Modern. That line was such a success Raymor went on to add other designers to their roster: Ben Seibel, Michael Lax, Arthur Umanoff, Richard Galef, Aldo Londi, Marcello Fantoni, and dozens (if not hundreds) of others.

The problem with designating a piece as “Raymor” comes with the many competitors bringing similar wares into the United States. One such company, Rosenthal-Netter, employed some of the same manufacturers as Raymor … including Bitossi. Many less-than-honest sellers on eBay and elsewhere are trying to capitalize on the cache held by the Raymor name, and thus are marking every unknown piece of MCM Italian art pottery as being “Raymor.” This is a completely false practice, and only serves to disinform the casual collector. The only way we can say if an object is truly “Raymor” these days is if the item is marked with the Raymor name in the embossed or printed mark, or if it still retains its original Raymor product sticker. If a sticker remains on the bottom of your jug, it should be stamped with a product code including the three letter indication “BIT” if it indeed originated from the Bitossi factory.

Your jug certainly looks like other pieces Bitossi produced under the art direction of Aldo Londi, and it may or may not from the Rimini Blu line. I’m by no means an expert, though, and this is simply my opinion.

Where to buy reproductions?