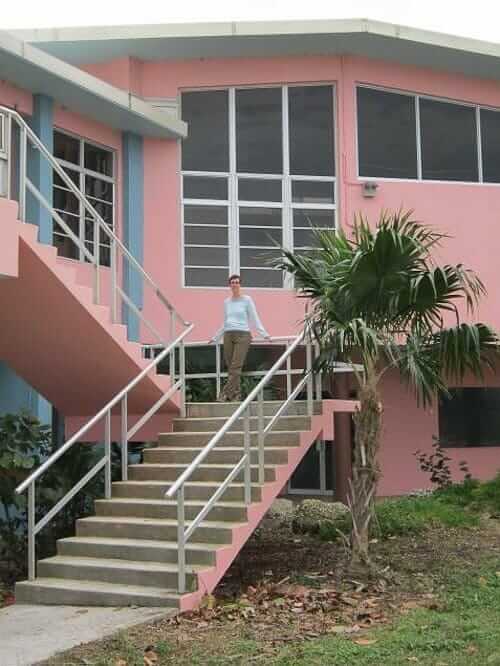 Today, a special report by reader Heidi Swank
on ‘Parkitecture’, Mission 66, and the
Flamingo Visitors Center in the Everglades National Park

Special edition — This story was written by Heidi Swank:

One of the benefits of our 2005 move from Chicago to Las Vegas has been the proximity of our new home to many state and national parks. Over the past six or so years my husband Scott and I have become avid national park goers. We have visited a number of national parks from the large and famous, like Yosemite, to lesser-known ones, like Guadalupe Mountains. About four years ago we took a three-week road trip visiting many national parks from California to Texas. As we traveled through the first several national parks on our trip, we began to notice that many of the park buildings not only seemed to come from the same theme but also had clearly been built in the 1950s and 1960s.

When we got to Big Bend National Park in Texas (#4 on our tour), we happened to meet a park ranger who knew all about these beautiful midcentury buildings. In fact, he was so ecstatic that we were interested in this era of “parkitecture” then he took us all through the back offices with Scott and I Oooing and Ahhing over pristine wood paneling, vintage linoleum, and original doorknobs. The ranger, whose name I’ve unfortunately forgotten, told us that the buildings in Big Bend and many national parks were part of the Mission 66 project.

He went on to tell us that Mission 66 began in 1956 and was intended to pick up where post-Depression New Deal park development had been cut short when the United States entered World War II. Inaugurated by President Eisenhower, the aim was to rehabilitate and expand the parks that had received little attention during the war and thus had fallen into disrepair. we got to Big Bend National Park in Texas (#4 on the tour), we happened to meet a park ranger who knew all about these beautiful midcentury buildings. In fact, he was so ecstatic that we were interested in this era of “parkitecture” then he took us all through the back offices with Scott and I Oooing and Ahhing over pristine wood paneling, vintage linoleum, and original doorknobs. The ranger, whose name I’ve unfortunately forgotten, told us that the buildings in Big Bend and many national parks were part of the Mission 66 project. 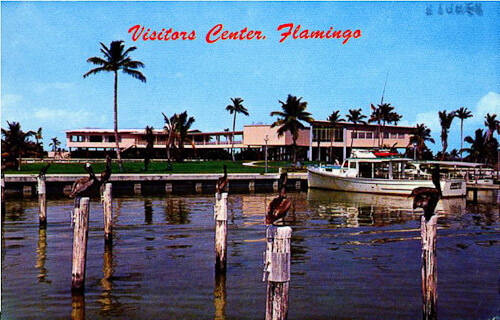 Post-War America was a time of prosperity and increased leisure for many. And Americans were flocking to their national parks. However, the existing roads, parking lots, and facilities in many of the parks were too dilapidated and inadequate for such large numbers of visitors. Mission 66 brought in new facilities including what became the hub of park activity: the visitor center. It was dubbed Mission 66 because it came to a close in 1966, the 50th anniversary of the National Park Service. For us, this tour marked our start as Mission 66 activists (in addition to being general national park geeks). Once we returned home, we bought the Mission 66 book — Mission 66: Modernism and the National Park Dilemma*

— the park ranger had shown us. We were sold on Mission 66!  (*Pam disclosure: Links to book are affiliate links to Amazon. If you buy the book via my links, I get a little spiff.)

With this new knowledge, it seemed to my husband and I that we could bring together our enthusiasm for midcentury style and the national parks in Mission 66. We began to seek out Mission 66 buildings at every national park we visited. Sadly, we found that often park rangers were unhappy with these “old buildings” and hoped to update (gasp!) them before they turned fifty and became protected historic structures. Hearing these stories, we started talking to park rangers about the beauty and historical significance of their buildings, seeing ourselves as Mission 66 activists. 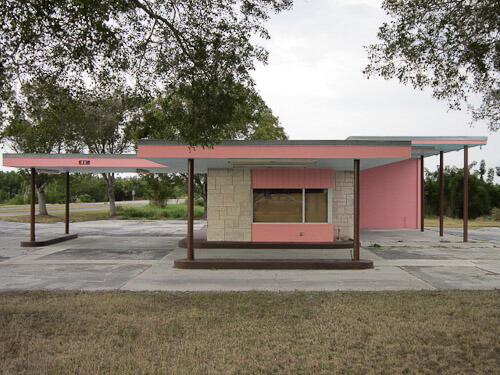 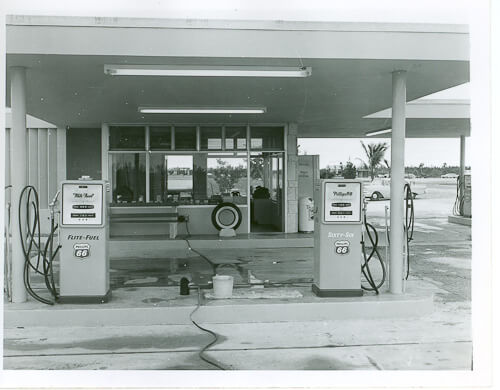 A few weeks ago, we were vacationing in Florida with plans to camp in Everglades National Park. We knew there were some Mission 66 buildings in the Everglades, but we also knew that hurricanes Katrina and Wilma in 2005 had taken their toll on the park and its buildings. So you can imagine our surprise when we arrived at Flamingo, the central area for activity in the Everglades, to find what was clearly a 1950s gas station, not in use but in excellent condition and newly painted pink! (Mamie would be sooooo proud!) 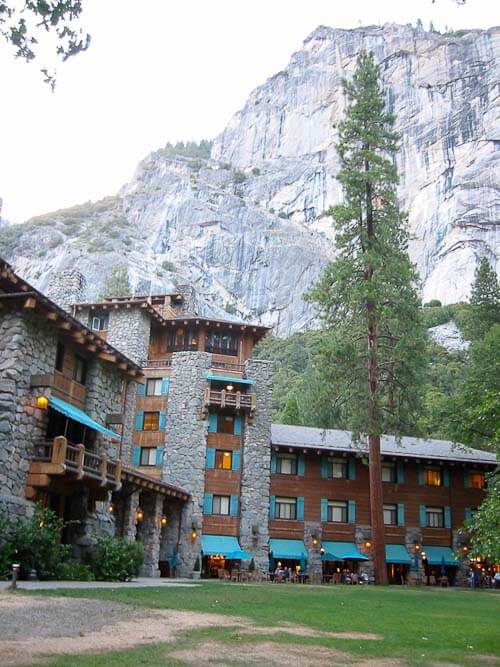 Before we had left on vacation, we had, of course, consulted our Mission 66 book for any information on the Everglades buildings. So we knew that the Flamingo visitor center was one of eight that comprised the first phase of Mission 66. Thus, it was one of the first National Park Service visitor centers built in the new modernist style of architecture that became the hallmark of Mission 66. Prior to World War II, the National Park Service buildings were built in a rustic style, like the Ahwahnee Lodge in Yosemite (above).

And while beautiful, we had read that the Mission 66 project was given only limited funds for buildings, which meant that National Park Service architects needed to use materials and designs that were very economical. They looked to the modern architecture that was emerging in the 1950s, even bringing in consultants like Richard Neutra to assist. 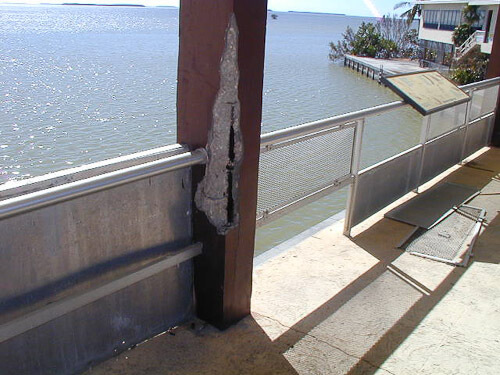 Originally, although the restaurant in the western building always had air-conditioning, the breezeway and the entrance to the information area were enclosed only by screens. (August must’ve been uncomfortable to say the least!) In 1962, just five years after Flamingo opened, Hurricane Andrew made short work of these screens. Apart from this rather minor damage by Andrew, Flamingo weathered Florida’s hurricanes rather well over the following almost 40 years. 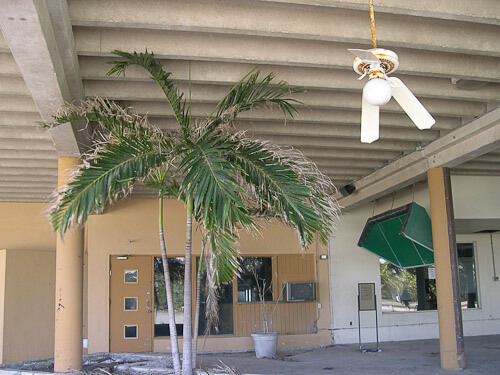 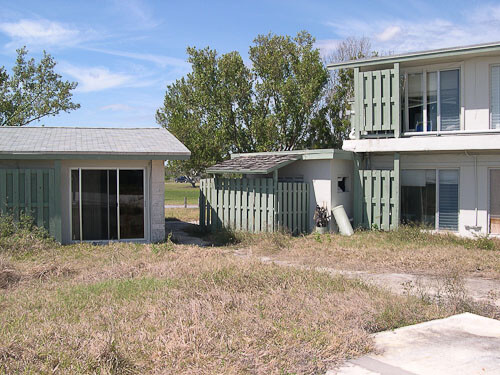 In 2005, Flamingo remained intact – though it did not keep its original pink exterior – and was about to be assessed for its historical significance when Hurricanes Katrina and Wilma struck. Fortunately, and despite an almost eight-foot storm surge after Wilma, most of the damage was only cosmetic. The roof had leaked horribly in the restaurant, leaving its interior beyond repair. Some of the exterior concrete had fallen away but none of the damage was structural. Regrettably, the nearby Flamingo Lodge, which was not raised on columns, did not fare so well and had to be demolished.

When I spoke with the Everglades’ Chief of Cultural Resources, Melissa Memory – great name for a historian! – the restoration of Flamingo was moving along, although at a slow pace due to a lack of Federal funds. The visitor center and gas station are back to their original Mamie pink, last year windows were replaced – making the sticky Everglades summers more bearable – and the information center, complete with midcentury handrail got a facelift. 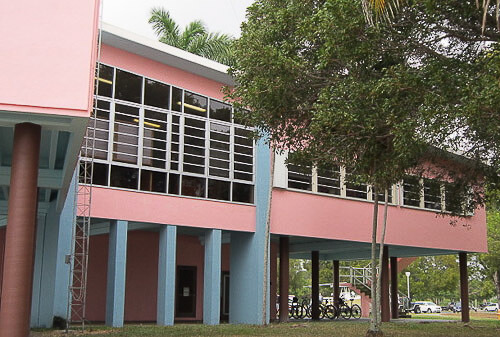 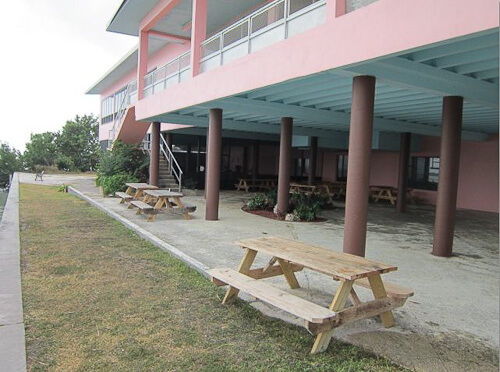 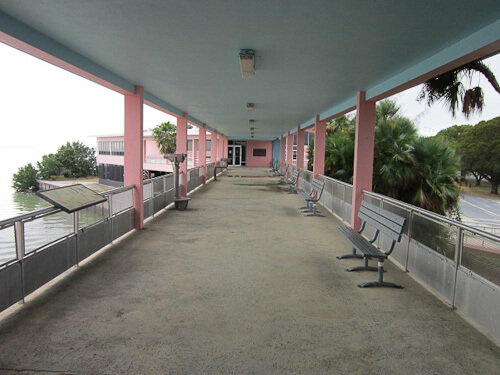 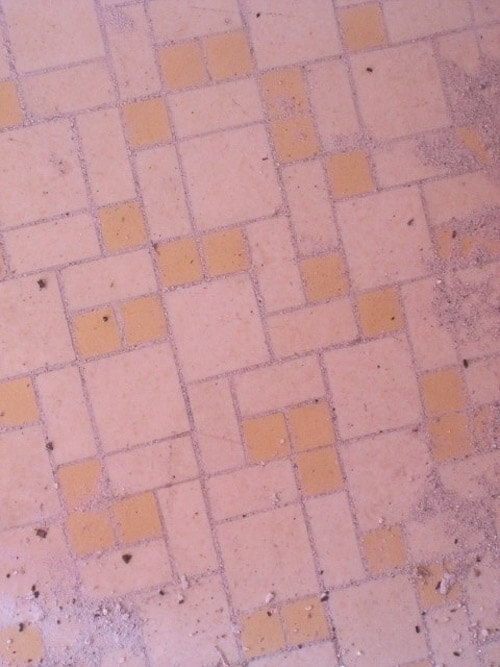 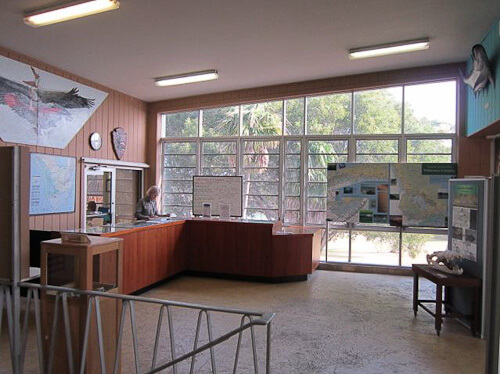 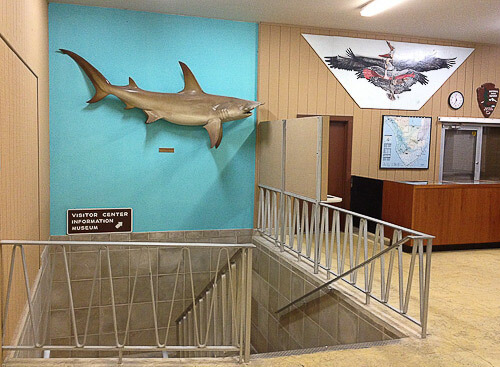 There still remains much to do. The original and tiny information area, museum, and gift shop currently in the eastern building will take over the expansive western building that previously housed the restaurant. The eastern building will then be occupied by additional offices, a conference room, and a bit more public space. When I asked about plans for the two buildings’ interiors, Melissa told me about the Park Service’s plan to merge green, sustainable design with midcentury style. 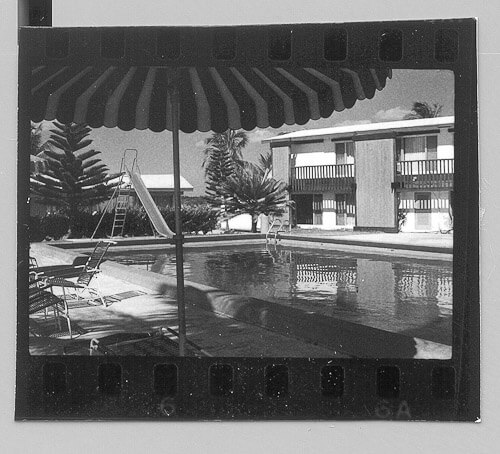 There are also plans to rebuild Flamingo Lodge and re-create a permanent restaurant, replacing the current temporary café that is housed in a screen-enclosed area under the visitor center. From what I’ve read these new additions will also draw upon midcentury design, even including some butterfly rooflines!

At the end of our wonderful Everglades vacation, Scott and I drove past the Flamingo visitor center and charming little gas station on our way to Miami. We felt relieved and happy in the knowledge that there are many rangers in the National Park Service, like Melissa Memory and Tim Taylor, who are also Mission 66 activists. Because of folk like Melissa and Tim, we can rest assured that these amazing Mission 66 buildings will remain for our and everyone’s future National Park adventures!

Pam writes: Thank you, Heidi, for this amazing report. I really learned a lot — and now, I have a big idea for where to go when I retire and buy and refurbish a vintage canned ham trailer. To all the Mission 66 locations, yes!

Thanks, also, to Melissa Memory of the National Park Service for providing the vintage photography shown here. 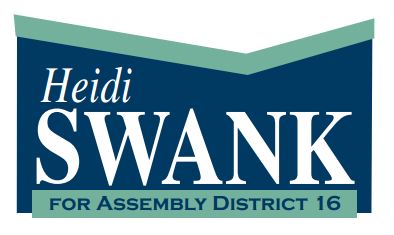 Readers, Heidi is a woman on the go. She recently announced that she is running for the Nevada State Assembly in Las Vegas. Did her mid mod butterfly-roofed logo. Go, Heidi, Go!