“We went back and forth on just gutting the whole thing, but … [once] I …saw some cool examples of pink bathrooms and ideas from others, a plan started to form on how we could make it our own. Suddenly, pink was kinda cool.” 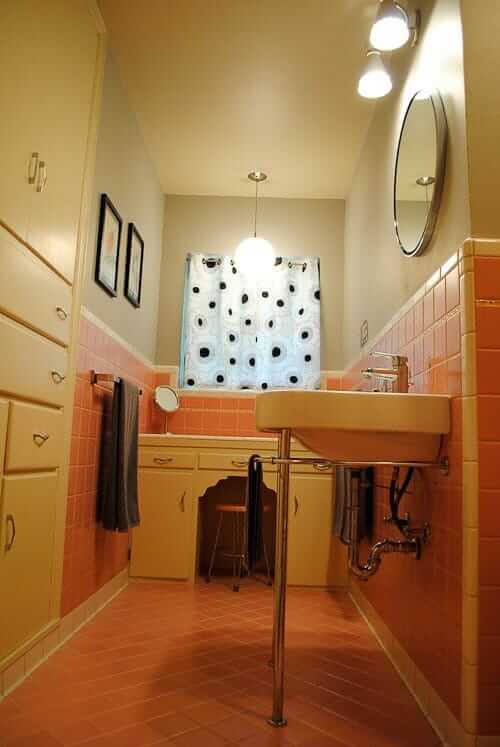 I am going to subtitle this story, “The versatility of midcentury bathrooms.” When Mike first sent me photos of his and wife Lindsey’s 1949 pink bathroom “before”, well, I kind of liked it. Very girly, blingy, French Provincial — a classic, enduring decorating style — the room was nicely done. However, Mike and Lindsey just weren’t feeling the frilly love. But rather than ditch the pink (indeed, Mike admits that at first, before they found our websites, they were in pink-shock), they kept the bones of the bathroom — the gorgeous pink tiles — and focused on making *relatively* easy cosmetic decorating changes that transformed the charming country pink bathroom into a retro modern pink bathroom. Such is the versatility of many midcentury bathrooms: 4″ ceramic tile is about as timeless as you can get in a bathroom. Except for during the 1950s, it’s never been hugely “In”. But, it has never been hugely “Out,” either. As a backdrop for any decorative look, 4″ ceramic bathroom tile is pretty darn versatile. It’s affordable, too — especially if it was there to begin with. Read on for Mike’s excellent story about this bathroom before-and-after transformation. Oh, and guess what? There is a second, even bigger pink bathroom in Mike and Lindsey’s 1949 house… But let’s start at the beginning… –> 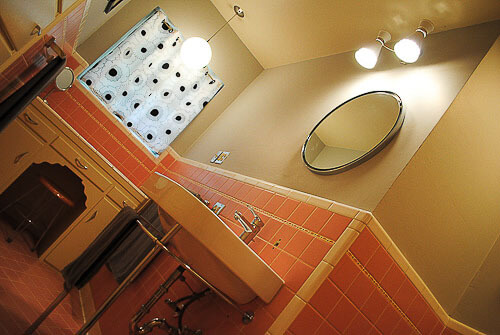 So here is our bathroom story….

We will be completely honest and say that we did not love our pink bathrooms at first. During our house hunt in 2009 we were specifically looking for a mid century ranch. Lindsey and I were both moving from 1920’s era homes and had started to really get into vintage, mid century design and style. We both love original tiled bathrooms, but when we finally settled on this house, the pink bathrooms were not exactly what we were looking for. Pink!?? Green, blue, grey, or even black and white would have been great.. but two completely pink bathrooms…pink?…. not really sure about that…

We decided to leave the bathrooms alone as we tackled the rest of the house. We were just not sure what to do with them. We had no idea how to work with all that pink. But not too long after moving in, a loose piece of wallpaper got the better of me and I just could not resist reaching up and peeling it off… and I was off to the races with no real plan on what to do. We went back and forth on just gutting the whole thing, but I thought there must be a way to work with this all this pink. The tile seemed to be in good shape and I just could not bring myself to tear out one of the only original features left in the house. That was when I came across the “Save The Pink Bathrooms” site and Retrorenovation.com. I quickly saw some cool examples of pink bathrooms, ideas from others, and a plan started to form on how we could make it our own. Suddenly, pink was kinda cool.

I certainly understand what you are saying about the “before”. To each their own. The entire house was similar to the bathroom. I guess what I would call french country cottage? Although not our style, it was very well done and I appreciated all the effort and attention to detail the previous owners put into the house. it was owned by a young couple, similar to us, and they had spent the previous 3-4 years redoing the whole house, and then we went in and re-did it all over again lol…. so this house has gotten a lot of attention the last 10yrs, it probably has an identity crisis at this point :). 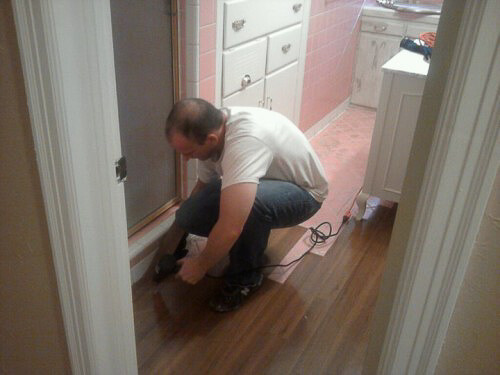 By far, the two biggest projects were renovating the floor and the built-in vanity.

The floor had been completely covered with a faux wood stick down linoleum. Who knows how long it had been there or what I would find under it. It was a painstaking process using a heat gun and putty knife to pull it up inch by inch. Once it was up, the thick glue left behind had to be scrapped off with a razor blade and the tile scrubbed with “goo off” over and over a again. I have well over 50 hours into that floor. Amazingly it turned out great and luckily ran into very few cracks or damaged tiles.

The built in vanity had been given some sort of special paint/epoxy treatment to make it look like old crackled wood. 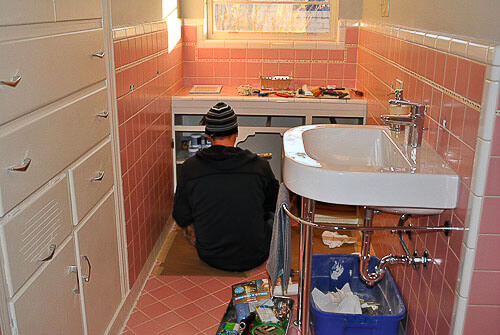 Not really sure what that was about or what it exactly was, but it definitely could not be painted over. 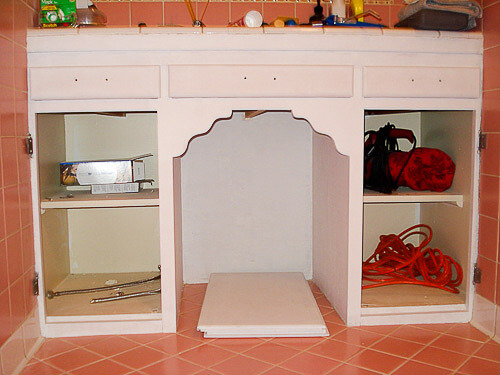 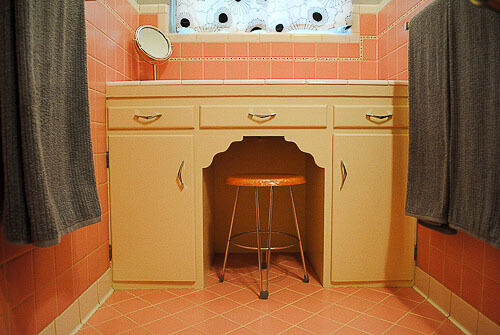 Hours were spent scraping off of every nook and cranny, filling damaged spots, sanded, and painted. 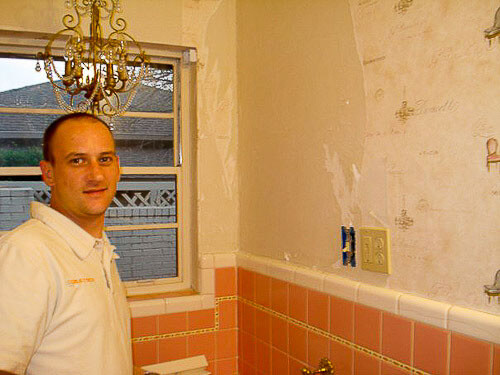 Then, on to removing the wallpaper…. After it was removed, the walls had to be skim coated, primed, and painted. 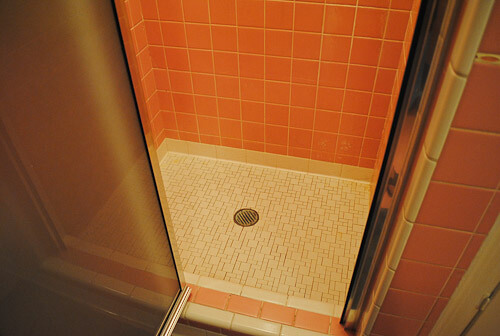 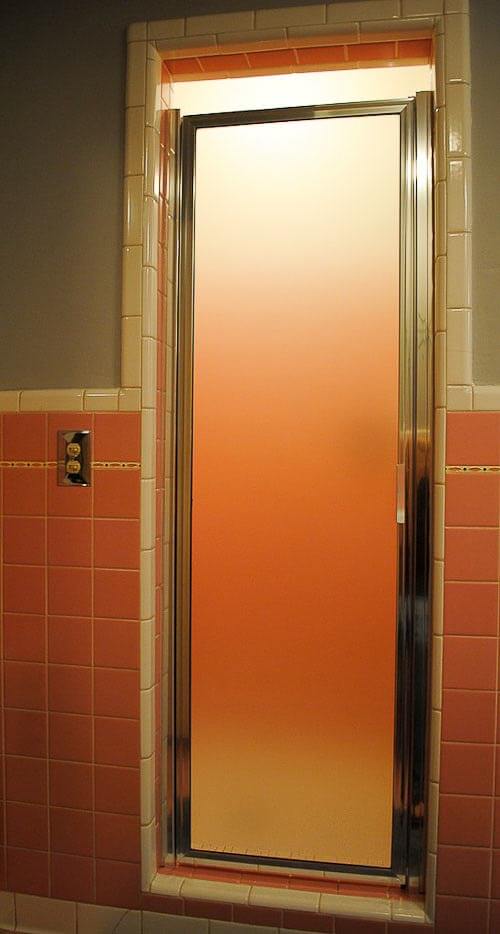 Shower door looked to be a replacement from the 80’s and showing signs of rust. Took a while to find a new one in a appropriate style, size, and reasonable price. 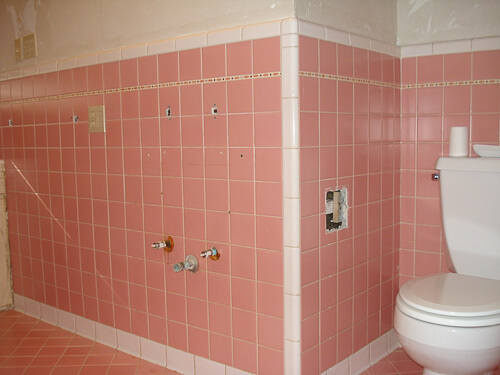 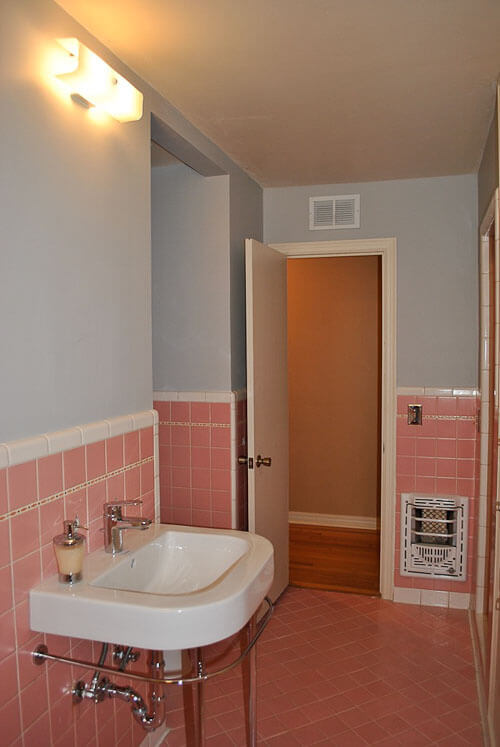 The sink and cabinet had seen better days and took up too much floor space in this narrow bathroom. We wanted to do the bathroom in a twist of vintage and new modern, so the wall mount sink from Duravit with the chrome legs was a good fit and a reasonable price. I could also tell a wall-mount sink with legs had been there originally because of the old mounting points on the walls and two spots on the tile floor where the legs would have rested. The chrome legs on the sink led to doing matching finishes in chrome on the boomerang hardware, towel bars, recessed toilet paper holder, recessed soap holder in the shower, and outlet covers. 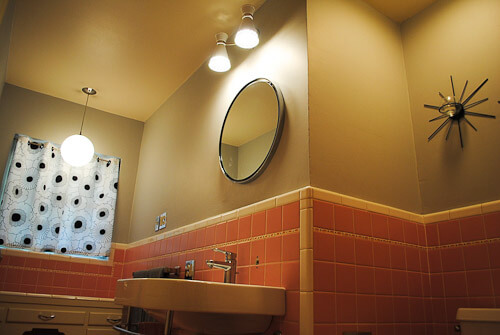 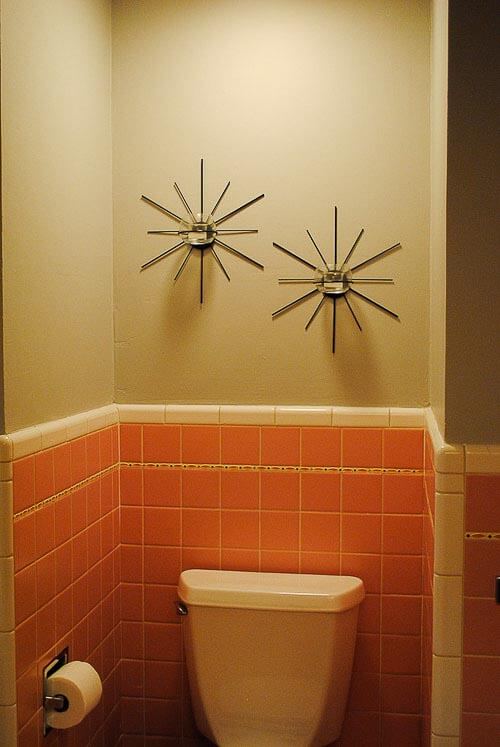 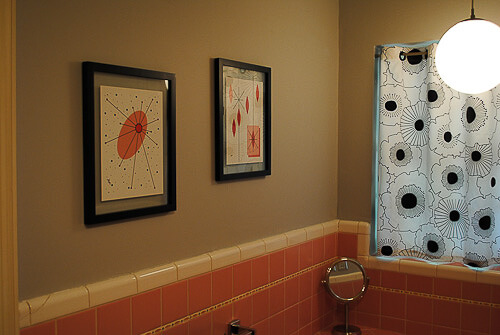 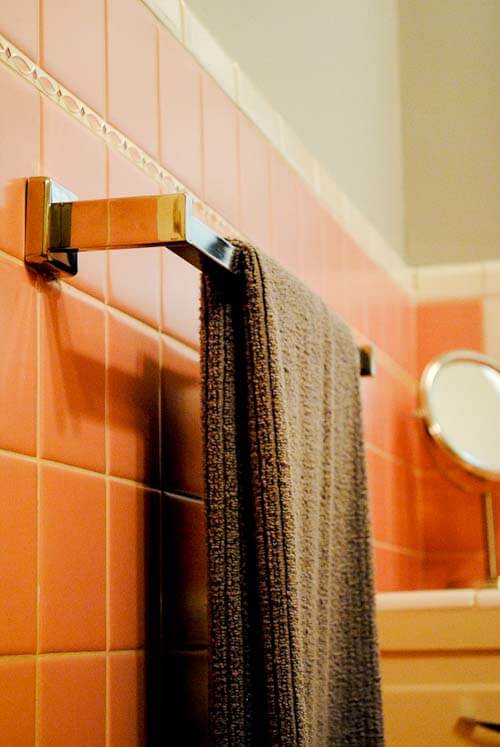 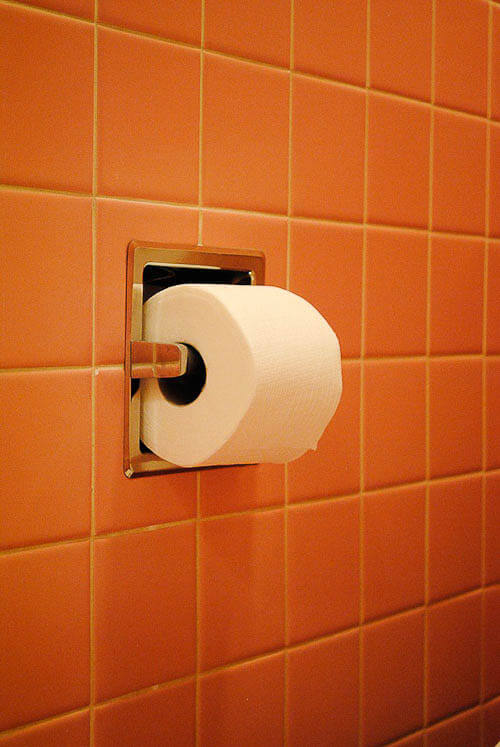 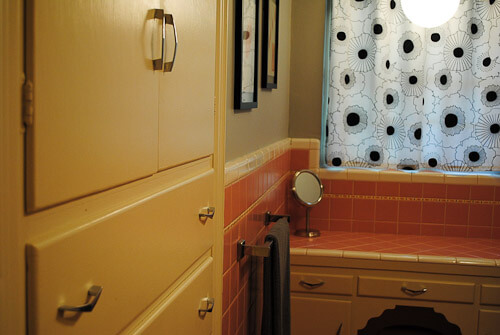 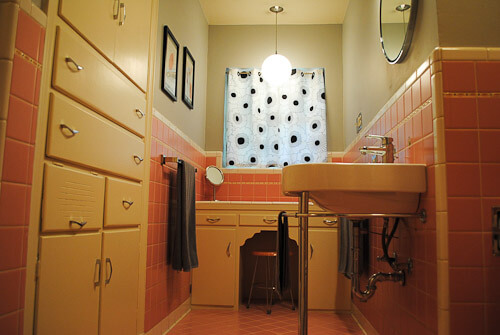 A few finds from etsy on the vanity stool, art for the wall, and candle holders over the toilet rounded things off. 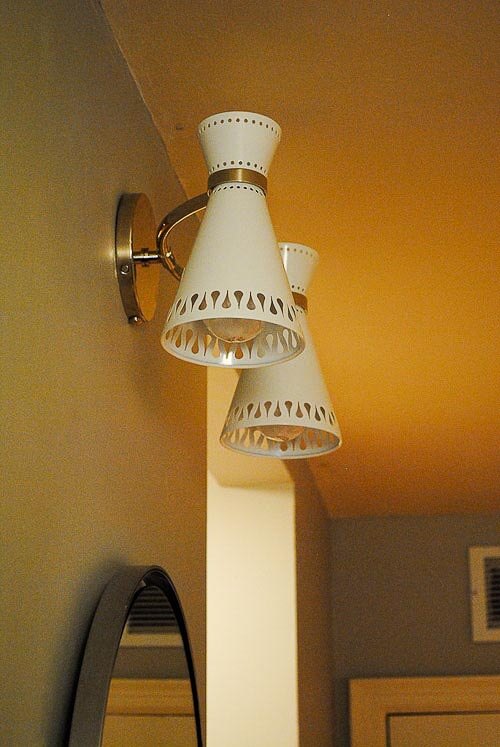 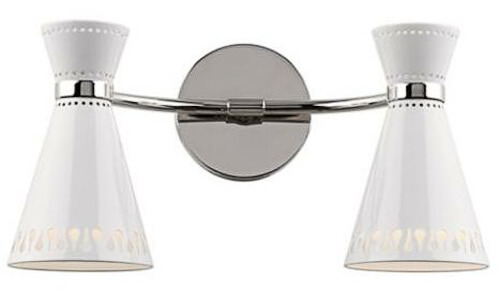 The light above the sink took forever to decide on. Have had three different lights there and finally rested on what we have now. Really wanted to do sconces on either side of the mirror, but that would have meant bringing in a electrician. In total we spent about $2K. 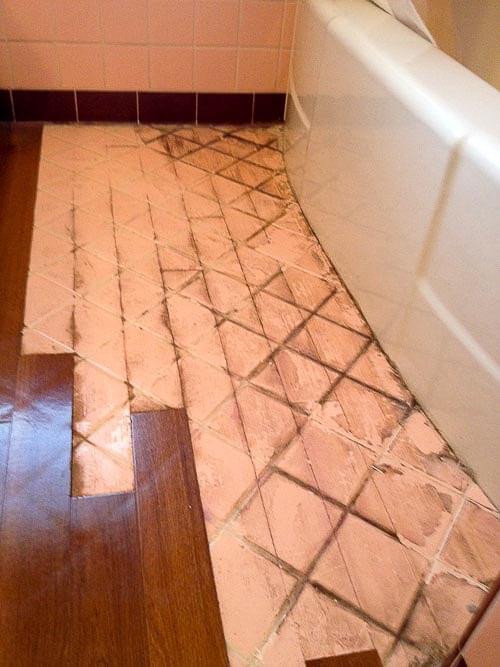 We also have a all pink master bath that is the last room in the house for us to tackle… just started pulling up the same faux wood linoleum floor, oh what joy. (included a pic of the start on the master bath floor)

Sink: Duravit Happy D wall mount sink with chrome legs. Don’t recall where it was purchased, but was around $500 shipped.

Prints: Seller/artist on etsy.com — Tonya Newton, Gamma Gamma Hey — that I have bought a few prints from for the house.

Let us know if you need anything else 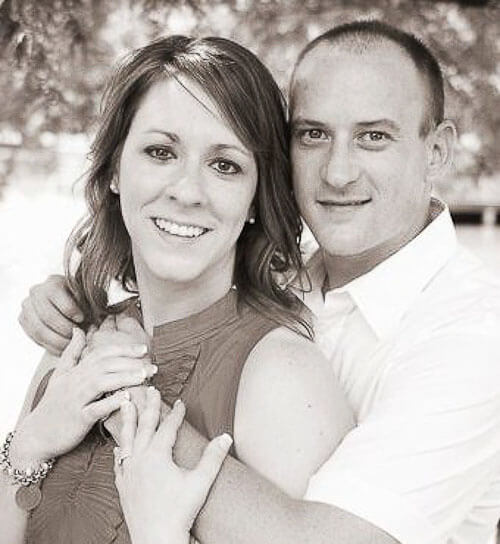 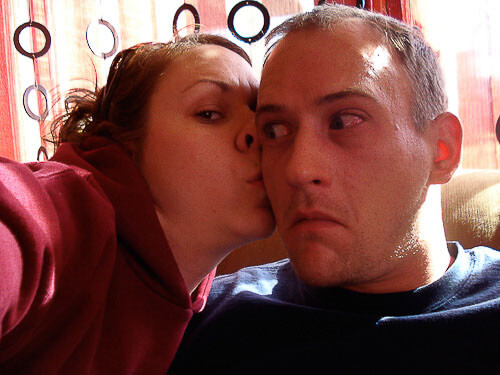 What can I say? Not much! Lindsey and Mike, you two did a fantastic job. And you are toooooo cute! Many thanks for so generously sharing your story, your photos and your resource list. Now, can’t wait to see your master bath when it’s done. Two pink bathrooms, happily renovated/renovating. You are a lucky — and smart! — pair. xoxo