But are they really Bauer? A controversy!

Here’s the catch of the day — a school of wonderful oddities — 8 vintage Bauer Pottery Chicken of the Sea Tuna Bakers, New Old Stock (NOS) still in their original boxes. Reader Jocelyn — thank you, J! — tipped Pam off to this prime fishin’ spot on Ebay — where you can reel in enough tuna bakers to serve individual tuna casseroles at your next dinner party. But the pretty fish are gonna cost you… 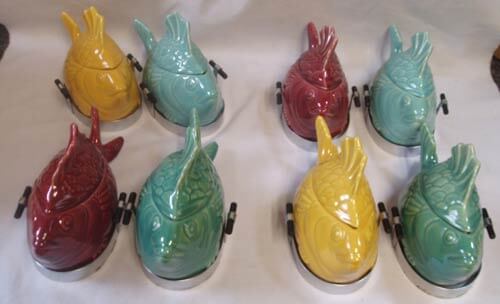 Ebay seller wandermum was kind enough to let us feature these great photos from her ebay listing for our forever-archive of wonderful midcentury oddities: 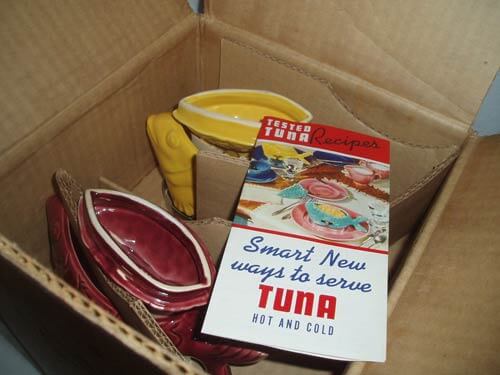 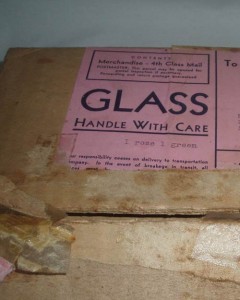 I initially started doing some research on Bauer Pottery for this story, when I was confronted by a controversy! It seems that there is some dispute about who actually manufactured these tuna bakers for Chicken of the Sea. Some swear it was Bauer Pottery, some think Homer Laughlin picked up production because the glaze colors seem to match their Fiesta ware line, and others like decolady — who has used these tuna bakers to make a lovely table setting on her blog, which features some great information about these pieces and the matching salt and pepper shakers — conclude they must be manufactured by Hollydale Pottery because many of the salt and pepper shakers that have been found still in the original boxes are postmarked Hollydale, CA — the location of Hollydale Pottery. Unfortunately, There isn’t much information to be found on Hollydale Pottery — a fire in 1952 forced the company to stop production and destroyed a large amount of their pottery stock. 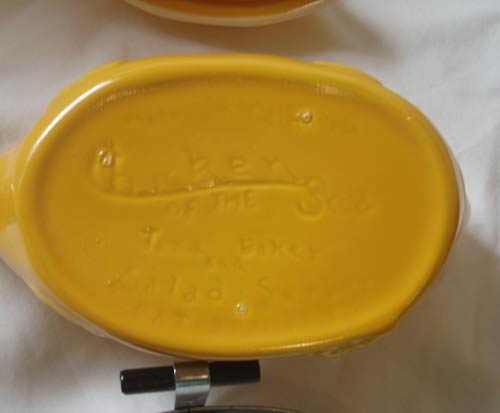 I’ve contacted Homer Laughlin and heard from Dave Conely — the same friendly contact that helped me in my story about Fiesta ware — who has assured me that these pieces were never produced by the Homer Laughlin Company. I also have a query in to Bauer Pottery to try and clear up this confusion once and for all and will update the story when I hear back from them regarding this issue. Perhaps some of the pieces were made by Bauer Pottery and others — like the salt and pepper shakers — were made by Hollydale? 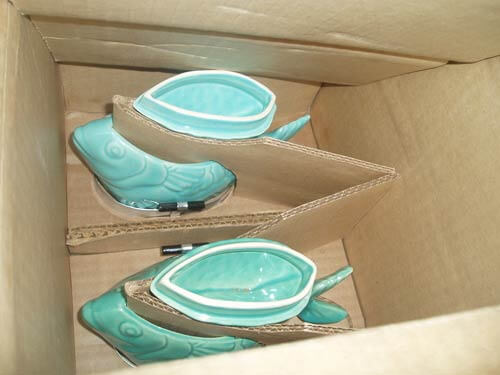 I’ve also found some vintage ads featuring these tuna bakers on jitterbuzz.com as well as a matching platter — seems like there was a whole series of this stuff! The silver rings on the bottom of the tuna bakers act as stands to help protect hot-from-the-oven tuna casseroles needing a trivet. 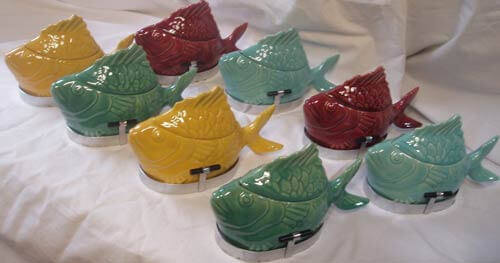 Whoever produced these tuna bakers, one thing is for sure — their range of colors, playful pose and usefulness makes them a great woddity to collect and display — might be well worth the 495 clams — even if you aren’t a fan of tuna salad, hot or cold. 😉

Above: Mega thanks to reader Ann for sending in this vintage tuna bakers ad from 1941! If only we could still use those order forms.

UPDATE: I heard back from Bauer and they have scoured their records — they did not make the tuna bakers! Robert Takata from Bauer Pottery Company writes:

To the best of our knowledge, they were not made by Bauer.  None of the research we’ve done show any evidence that Bauer was the manufacturer of the tuna bakers.  Bauer did make a much larger fish shaped cookie jar and that may have created some initial confusion that carried on throughout the years.  The colors are also similar to Bauer colors of the time, but again, the brightly glazed California style pottery was very popular and there were other manufactures glazing similar colors.

If you want to dig deeper into this mystery, you might try contacting Jack Chipman or Mitch Tuchman, each of whom published very good books on Bauer pottery.

I know it’s not much, but I hope it helps.

I had already contacted Jack Chipman, who recently replied:

Kate,
The Chicken of the Sea items were produced by Hollydale not Bauer.  Bauer did not produce premium items.
Jack

So there you have it folks — Chicken of the Sea items were produced by Hollydale pottery in California. Mystery solved!