So how are these Andy Warhol soup cans — and Jim’s marriage proposal to Kate — connected? Read on 🙂 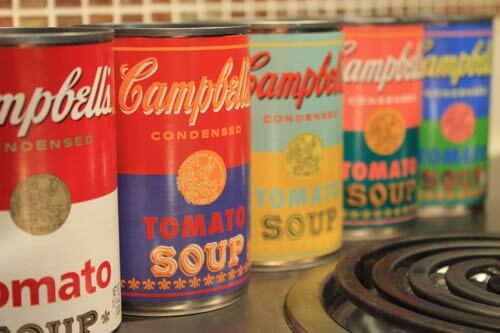 Andy Warhol was one of the most influential artists in the history of 20th century American popular culture — and, he played a pivotal role in my personal life story, as well. I’m a huge Warhol fan. I’ve made several trip to the Warhol Museum in Pittsburgh, Penn. (where Warhol grew up) — including two that were life altering.

The first time I visited the Warhol Museum, I was in high school and made the trip with my Mom, who is also an artist. At that point, I knew I wanted to pursue a degree in art. But it was only after spending an awe-filled day absorbing the seven floors of the Warhol Museum that I knew I wanted to be a graphic designer. Seeing how Warhol transformed everyday objects — like the Campbell’s soup can — into works of art made me believe that I too could elevate the mundane and make the design we see every day a little more special. 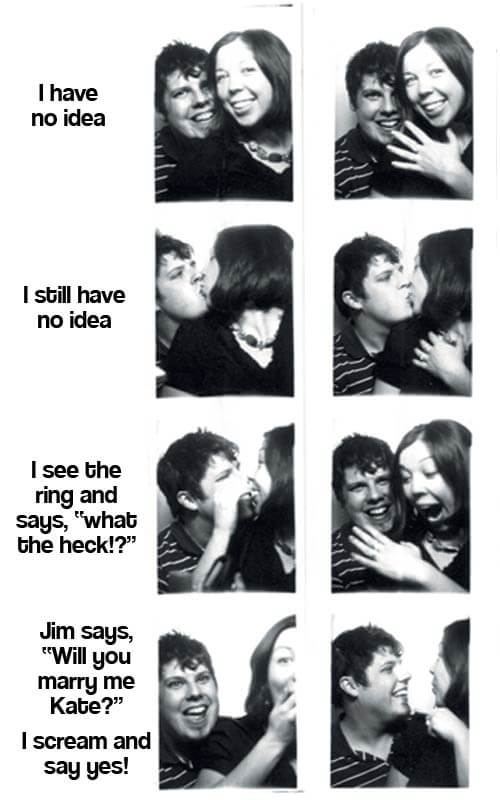 A later trip to the Warhol Museum — about three years ago — would further change my life. I wanted to share the museum experience that had been instrumental to my career choice with my then-boyfriend Jim, so we made the trip. To my surprise Jim proposed to me in the photobooth in the basement of the museum. I had my 15 minutes of fame then as the entire museum staff congratulated me and wished us luck in our new lives together.

Knowing my personal back story with Andy Warhol, you can see why I was ecstatic when I found out that Campbell’s soup was partnering with The Andy Warhol Foundation and Target to release these limited edition labels — based on original Warhol artwork. On Monday, I popped over to Target, and sure enough, I got me some pop art soup! Perfect decor for a retro kitchen — and so affordable: Just 75 cents a can! 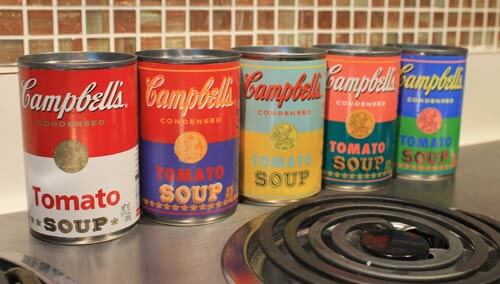 When asked why he painted Campbell’s soup cans, Warhol famously quipped, “I used to have the same [Campbell’s soup] lunch every day for twenty years1.” For his first solo gallery exhibition held in Los Angeles in 1962, Warhol exhibited his famous paintings of Campbell’s soup — 32 Campbell’s Soup Cans. Each of the thirty-two canvases depicted one variety of soup and was displayed side-by-side like cans of soup on a grocery store shelf. The painting helped launch Warhol’s career and ushered in Pop Art as a major art movement in the United States.

[Pam notes: For more info on the exact genesis of the Pop Art movement, see my story Pop Art and how it Started: Richard Hamilton, 1956, Just What is it that makes today’s homes so appealing, so different?]

“In 1962, Andy Warhol changed the trajectory of contemporary art by depicting Campbell soup cans on canvas,” said Michael Hermann, Director of Licensing at The Andy Warhol Foundation. “It is only fitting that 50 years later we celebrate the enduring legacy of these two American icons by coming full circle and bringing his art back to the Campbell soup cans that provided him with inspiration.”

The limited-edition cans were produced under license from The Andy Warhol Foundation, a not-for-profit corporation that promotes the visual arts. Beginning Sunday, Sept. 2, the cans will be exclusively available at most Target locations nationwide for $.75 per 10.75-ounce can, while supplies last. 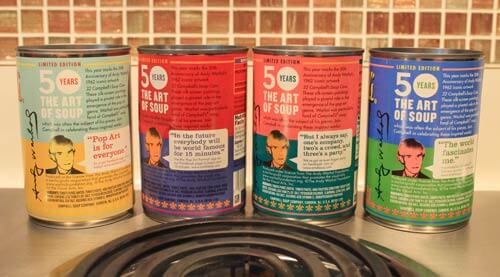 I think if Andy is watching, he’s pleased to see that painting what he ate for lunch still has such a huge affect on pop culture — even 50 years later. The backs of the cans feature quotes made famous by Andy Warhol.

Some more information from Campbell’s soup about the history of their relationship with Warhol:

While Campbell did not commission Warhol to paint the original soup cans, the company is proud to be associated with his work and currently displays an original Warhol painting at its headquarters in Camden, N.J. When the Campbell brand was featured in Warhol’s artwork starting in 1962, then President and CEO, William Beverly Murphy, indicated that he had some initial concern. The company took a “wait and see” approach and quickly became a supporter of Warhol’s work — sending him cases of Campbell’s Condensed Tomato soup, commissioning two paintings and establishing the Andy Warhol Scholarship Fund with the New York Art Academy.

Most recently, Campbell partnered with The Metropolitan Museum of Art in New York as a sponsor of the education and concerts and lectures programs associated with the exhibition Regarding Warhol: Sixty Artists, Fifty Years , which opens on Tuesday, Sept. 18.

Big Campbell’s Soup Can, just above, will be in The Met’s exhibition. 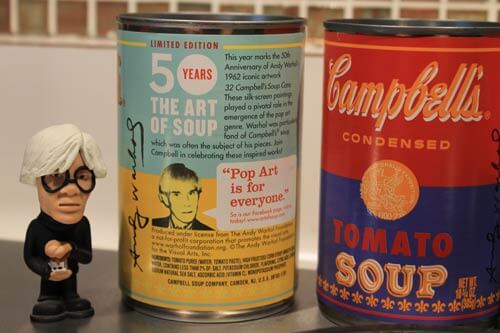 If all the hooplah over these limited edition labels gets you excited — or just makes you crave some tomato soup, take Warhol’s advice, “Pop Art is for everyone,” and get thee to Target to ladle up a hearty and affordable serving of art.