“We bought from the original owner’s daughters….
Luckily we got here when we did —
anybody else would have gutted the place.” 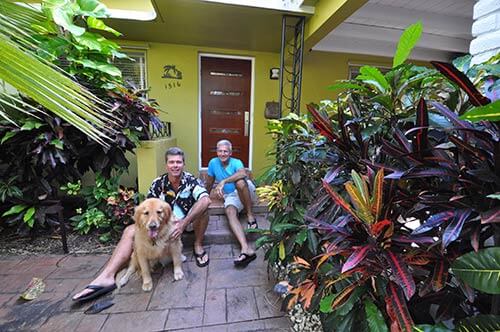 Clive — shown above with dog Chloe, and his partner Mike — reached out to us to share pictures of their awesome mostly original 1952 ranch house — with pink terrazzo floors. Clive grew up in Florida and always remembers playing and running around on cool terrazzo floors — but he had never seen the pink variety until he found them in his house. Pink terrazzo?! Yup, we will add this to our list of woddities. Continue on to see the terrazzo treasure, along with 10 other photos of Clive’s Florida paradiso –> 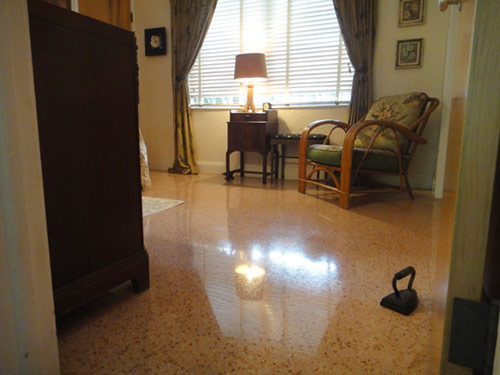 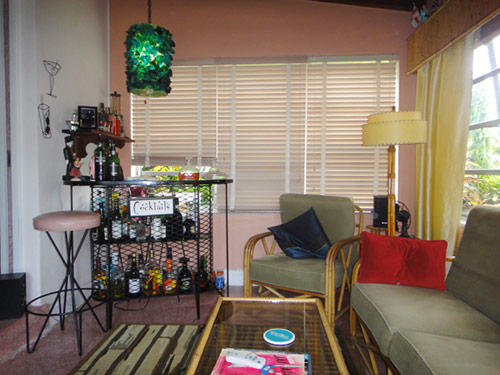 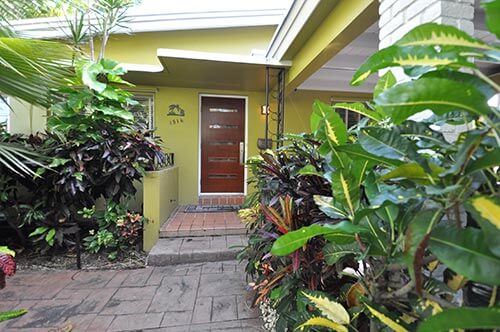 I read Retro Renovation all the time, and I just love it. I’ve been into mid century style for quite a while now. My partner and I have a 1952 mid century ranch in Florida. It’s all original with clerestory windows and pink terrazzo floors. We have the original tiles in both bathrooms. It was quite the find. I have some great 50s furniture as well. 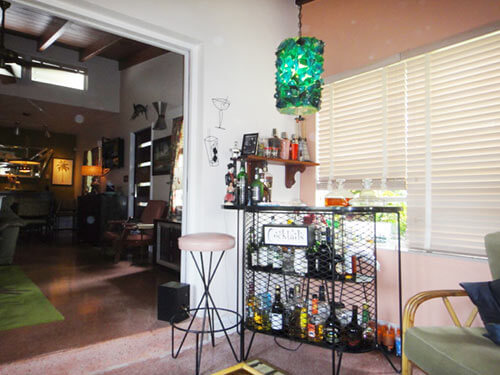 Then we saw a room that still had the terrazzo floor. My god it was pink. I grew up in South Florida and I had never seen pink terrazzo I had to have it. We bought from the original owner’s daughters. (Both parents had passed away and they were holding on to the house for sentimental reasons.) Luckily we got here when we did — anybody else would have gutted the place.

Pam was curious to understand more about the jalousie windows… Jalousie clerestories?, she asked Clive. He responded:

Yes they are frosted jalousies I had to repair some of the rivets , they work beautifully. I love having them open in the winter. You can feel the breeze though the whole house. It’s a  shed style roof so the heat rises and flows out. Good design for the time before home air conditioning. 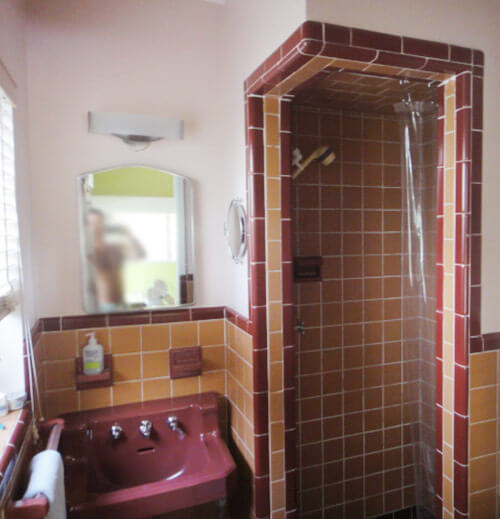 I did some research on the architect who built our house and found out he was a prominent architect here in Florida in the 50’s. He designed a wonderful hotel in the 50’s near me called the Entrada. 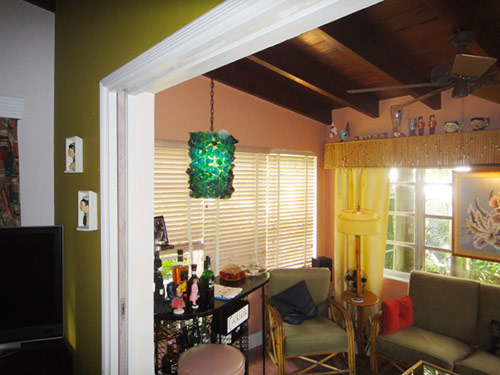 I own a small pest control company and have been in the business for 30 years. A lot my furnishings came from old houses in Florida. What people give to the bug man! I’m not shy — so when I see something I’m interested in, I ask. Sometimes they say, “Oh that old thing? Take it!” 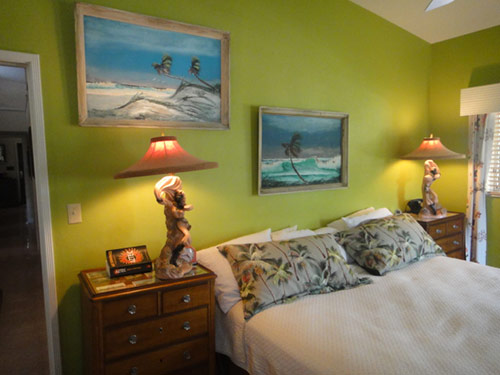 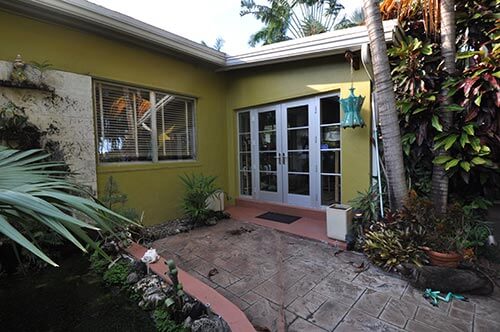 I once got a 1965 baby blue Plymouth Fury 3 (garage kept with only 50,000 miles) from a little old lady. She had passed away and I was doing inspection for the estate, and I asked the Realtor about the car in the garage. She gave me the information for the lawyer handling the estate and I bought it for $500 back in 1984. I got it home and found the original delivery receipt for the car as well as gas receipts from 1965. I think that was my all time best find.

Thanks for your great site! 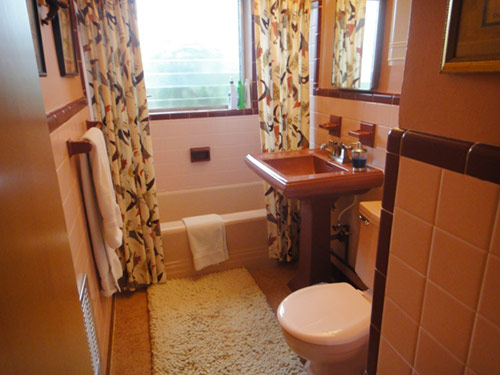 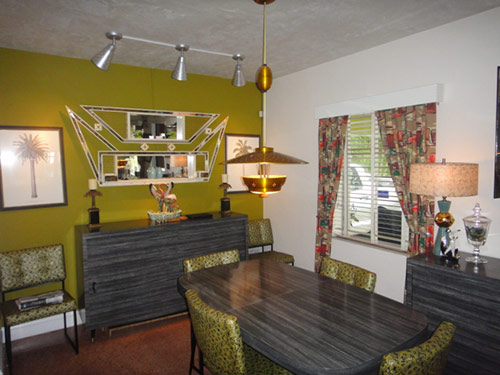 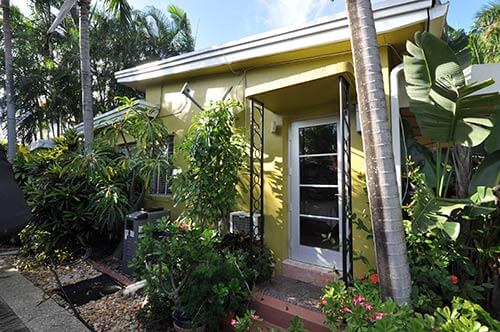 Clive, your house’s chartreuse exterior is dreamy. Luv the Formica dining room set. And of course, I love that you furnished your house (and even filled your garage) with stuff that people were getting rid of and “gave to the bug man.” Quite often, the process of acquiring furniture and accessories is just as interesting as the pieces themselves.

Clive, Mike and Chloe  — What a happy home you have — thanks so much for saving it — and for sharing it with all of us.

Clive and I would also like to credit and thank Tracy Bowden Lowery for her expert photography.

Categoriesreaders and their living rooms