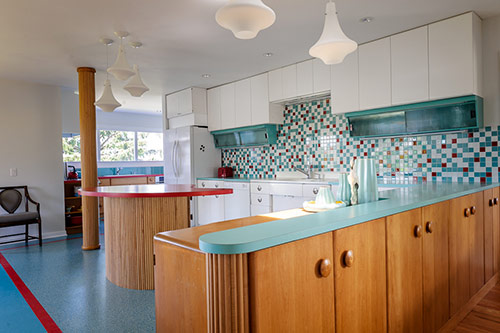 Our recently featured story — JoAnn and Mark’s retro retirement playhouse — with its many vintage pieces and Haywood-Wakefield influenced style — inspired a deeper look into tambour. The artful use of tambour in JoAnn’s kitchen — wrapping the island, support post and counter end — not only looks great but is period appropriate. But where does one acquire tambour for such a project? JoAnn kindly revealed her source — WoodWaves.com — which carries many different species and styles like the round maple tambour she used — perfect for retro renovations.

What is “tambour” exactly? A couple of online dictionaries described them as half-round pieces of wood glued onto canvas to create the the rolling part of a rolltop desk. Today, though, it seems there are special routers to create tambour without having to glue the wood pieces to anything. In 1980s kitchens, tambour doors were commonly used to hide appliances on kitchen counter tops within appliance garages. We’ve also seen tambour on the blog in these stories:

Where to buy tambour today:

JoAnn and Mark’s cabinetmaker obtained the tambour used throughout their kitchen from WoodWaves. Andre from WoodWaves.com provides a bit more information about their tambour:

We’ve been making tambour for over 20 years, but have been in the furniture industry for approximately 35 years. Tambour was primarily used for roll top desks and sliding doors, but, now can be used as decorative architectural panels. It has been used in restaurants, banks, and hotels. Our tambour comes in a variety of woods such as Red Oak, Maple, Cherry, Alder, Hickory, and Pine. We have Round, Flat, Pencil, Thin Flat, Thin Round, Grid, Shutter, and Butcher Block style tambour. 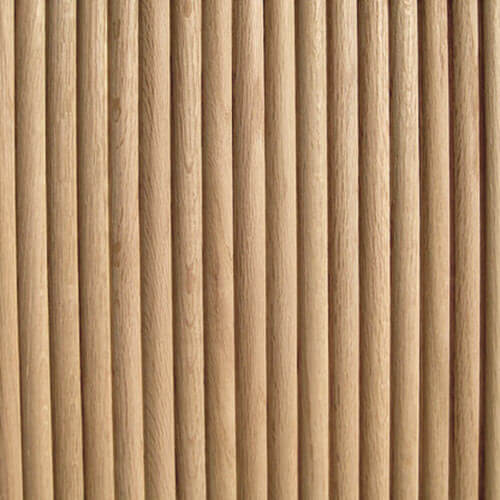 Tambour is a great option for use in retro kitchens — as a wrap around detail for islands, ends of counters or otherwise unsightly support posts. Tambour would also be a great addition to basement rec rooms (which also often include unsightly support posts). Planning a tiki bar themed room? Tambour would be a great material to use for wrapping the bar front — or create an accent wall or chair rail. The possibilities are endless.

Woodwaves also sells some mid century modern style furniture — many of which have tambour doors — like the media cabinet above.