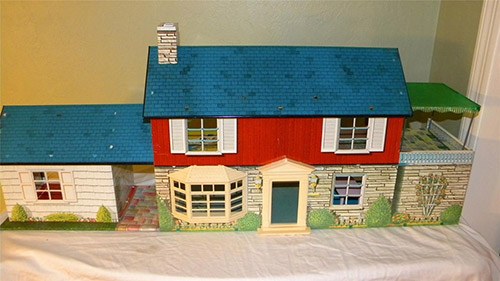 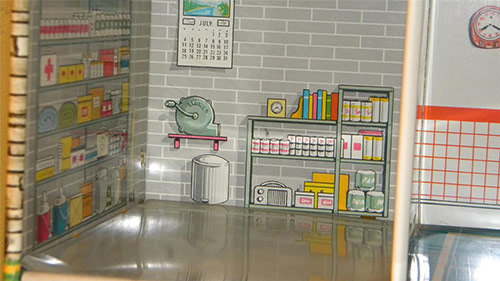 Here’s something you don’t see every day — a 1962 Marx tin dollhouse with a built in bomb shelter — spotted by Eartha Kitsch and featured on her fab blog, Ranch Dressing with Eartha Kitsch. There’s just something about miniature houses that appeals to most people — and this one also appeals to historians because of its rare bomb shelter. A few years ago, even the owner of the Marx Toy Museum had said he had seen only one of these rare doll house designs in his life — and that that the Museum didn’t even have one. 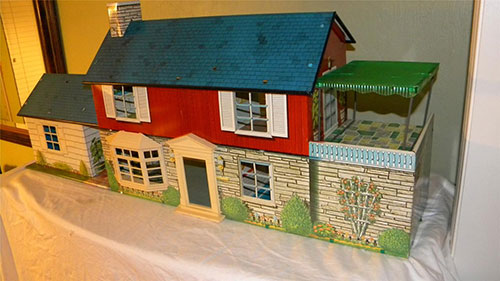 I emailed the seller, who kindly allowed us to show her photos here and also gave us a peek into how coveted this retro dollhouse seems to be is among vintage doll house collectors:

Hi Kate,
Thanks for contacting me on this. I’m more that happy to let you use the listing and link it. I have been selling on ebay for a while and I have never seen a response to a listing like this one. It is incredible the hits I get daily on it and the amount of people watching it. I’ve had several emails from people who have been looking for this dollhouse for 10+ years and others who want to link it to their dollhouse website. People who have these are so excited about their collection and sharing their stories with me and it has surprised many who never knew there was even a dollhouse out there made by Marx with a bomb shelter. It is truly a piece of history and I hope the right person gets this because if cared for it will last forever with the great shape it is in. I currently have over 40 people watching the auction and over 600 have pulled it up so it will be interesting to see what happens.
Sandy
– sandy3950

From the Ebay listing: 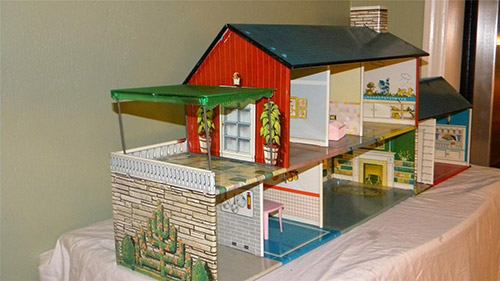 One of the rarest of all MARX houses is this one with the fall out shelter. The house was inspired by John F. Kennedy’s appeal to our nation to be prepared for the worst outcome in our Cold War with Russia. Many Americans built bomb shelters that year as a result. The craze was short lived and the house was a low seller, a real Bomb. The house was only produced for one year (1962) in a VERY LIMITED quantity. Since it was not a big seller it is extremely difficult to find. The house also came with the rare Dutch door in white plastic.  The inside of the house was exactly the same as most colonials, with the exception of the garage being replaced by the bombshelter. 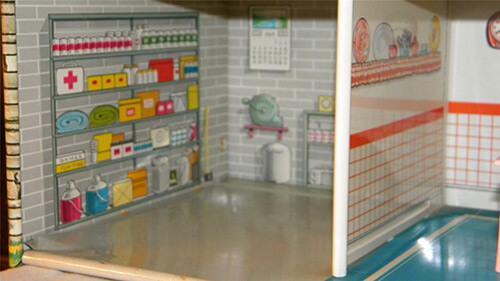 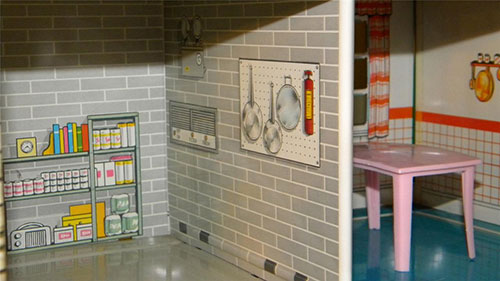 And here it is….. the one room that makes this item a collectors must have. This is Priceless so don’t let it get away. It will only go up in value. 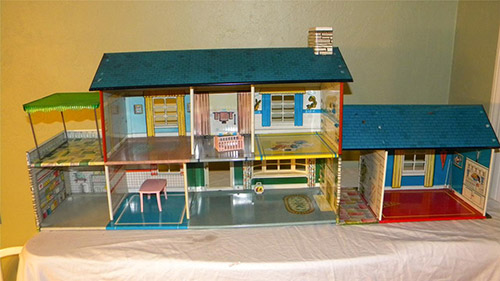 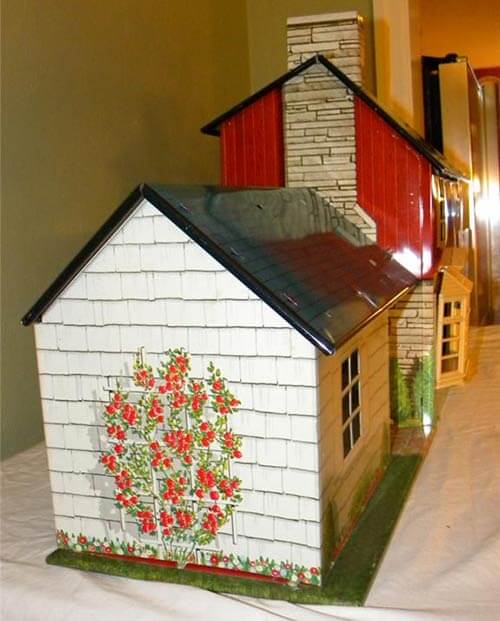 Super Rare features include.
1. Bomb Shelter/ fall-out shelter (has first aid items and things not normally in a garage)
2. Recroom/ gameroom
3. Breezeway
4. COVERED patio-I have not found anywhere. 5. Bay window front with the plastic pieces for the bay window
6. Dutch entry door -It is missing the actual door but has the plastic entry piece. 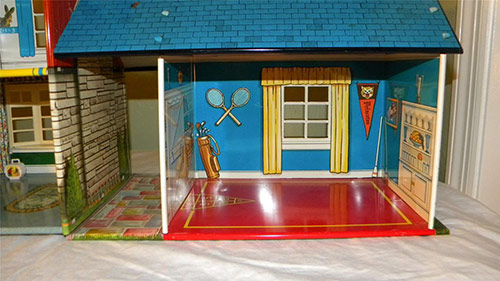 Appears to have been used very little if at all. No Rust. All tabs seem to be fine and all pieces attach together. Very colorfull and detailed pieces. There is one small scratch on roof and someone drew with a marker so I cleaned it off best I could. You can hardly see it now and it does not affect the overall look. Especially since it’s on the back side.  There are a couple other tiny scratches in places but compared to others I have seen from the same era this one is a gem!  It is missing the dutch door itself and the piece that goes on top of the breezeway side. It’s not a chimney but not sure what it is. The plastic green patio top does have a small crack in it but it is solid and hard to even see.

Seller Sandy also points to a 2008 story in the Charlotte Observer (link now gone) about the Official Marx Toy Museum. In her listing, Sandy says this was also in the story — although I cannot see it in the source document:

“Prominently missing in his collection is the grand Marx dollhouse that also came with a fallout shelter. ‘They just put that out for a little while, around the time of the Cuban missile crisis, and I’ve only seen one in my whole life,” [Museum owner] Turner apologizes.

There’s currently a take-no-prisoners opening bid of $999. This sold for $6.44 at Sears in 1962! Pretty darn good house appreciation!

Wow — this is truly an awesome little house. Special thanks to Ebay seller Sandy3950 for allowing us to feature this gem of a find. UPDATE: Dollhouse sold for more than $1,000.

Just one question: Wouldn’t a real bomb shelter always be below ground?