“… embodies many of Maybeck’s notions about what an ideal home should be; modest, free of adornment, well integrated into its site…” 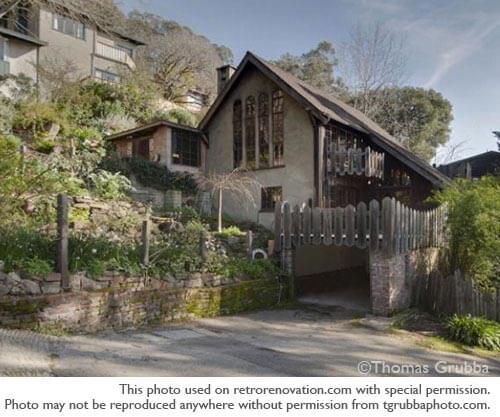 Thanks to reader Christa for the tip on today’s time capsule — an enchanting storybook house in Berkeley, California. Built in 1932 by famed architect Bernard Maybeck as a home for himself and his family, this charming cottage looks as if it could be straight from the pages of Grimm’s Fairy Tales. Maybeck — a “luminary” of architecture in early 20th century California — was known for building houses that were “confections” — delightful mash ups of various styles. We’ll call this one “Romantic Revival”, a style popular in the 1930s that celebrated the yee ole days of gothic cottages in England. We’ll also take a leap and say that this “Romantic Revival” style is part of the architectural lineage leading up to storybook / Cinderella / Hansel & Gretel ranch houses — furthermore reason to show it here! Maybeck house is artfully built into the hillside and has been carefully landscaped over the years. And oh my goodness, check out the million-dollar — literally — views of the San Francisco Bay. Mega thanks to photographer Thomas Grubba for allowing us to feature his breathtaking photos of this property.

Because of its connection to Maybeck, this house seems like it is bona-fide “historic”. So it’s *easy* to understand and appreciate why over the years, owners made updates that aimed to stay true to the original era and design of the house. If updates had been too contemporary or unsympathetic with this house’s historic bones, they would have destroyed value. Indeed, the listing information (you can read it all, below) points out that:

…a master bathroom, sensitively designed to fit the character of the home, was added.

The key words here: “Sensitively designed to fit the character of the home…”

Hey — a million dollar house with a lesson for our less expensive gems! Even though our mid century  modern and mid century  modest homes may not have historical provenance to compare with “a Maybeck,” it’s super clear that most have their own distinctive character. So just like the interim caretaker/owners of the Maybeck did with their master bathroom addition — the theory behind Retro Renovation says that if you sensitively design your updates to fit the character of the home — you will have a greater chance of adding lasting value over the long term — period-appropriate renovations will always “suit” your house.  This is, of course, in respect to the big remodel projects — kitchens, bathrooms, major architectural modifications — and not so much the furniture, light fixtures, paint and window treatments, which can be easily and relatively cheaply changed to suit each new  inhabitant’s style and needs.

Back to today’s time capsule — Here are the stats:

And, oh, the history!

After Bernard Maybeck’s large family house on Buena Vista Way in Berkeley burned down in the 1923 fire, it was never rebuilt, nor did he build another large house for his family. Instead, over the following years, he and his family built several cottages, all in the same neighborhood, some on the site of his original house. Maybeck had purchased large parcels of land in the North Berkeley hills, and 2751 Buena Vista Way was one of two family houses, essentially the same design but arranged to fit the graceful bay view site. These homes were built during the Depression to keep his staff and craftsmen working.

Over the years, various family members moved in and out of their 8 different houses, all cottages or chalets except for “Hilltop” in Kensington. 2751 Buena Vista however, was the heart of the extended family, where Bernard and Annie lived for several years and to which Wallen, Jacomena and the twins eventually returned. It embodies many of Maybeck’s notions about what an ideal home should be; modest, free of adornment, well integrated into its site amidst the lush foliage and with views of the S.F.Bay. 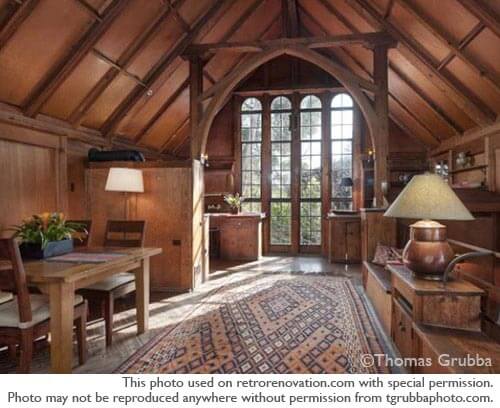 The living room has a medieval quality with a contemporary twist: its high arched beam ceilings and floor to ceiling metal sash cathedral windows at either end, create drama, atmosphere and add light.

The oversized fireplace, as in all Maybeck’s houses, reflects his belief that it is “the living heart” and gathering place of the family. Hob seating flanks this 6 foot fireplace.  Built-in seating performs an additional function of forming a barrier to the stairway, obscuring it and providing extra storage. His decorative use of structural elements, such as the beams, can be seen in many of the houses he designed. The many windows and French doors out to the decks, including one hanging on chains, extend the interior spaces outside and allow one to participate in the beautiful natural landscape, which he so loved. Watching the filtered light through the trees in the late afternoon in the bedroom with the hanging deck is magical. 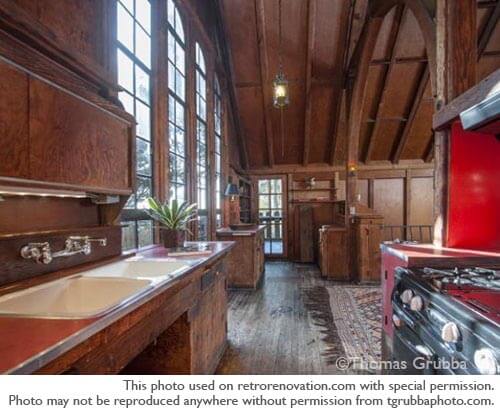 It has a very intimate and romantic quality and sits on the corner of the private Maybeck Twin Drive and Buena Vista Way, a neighborhood steeped in Berkeley history, with houses designed by many notable architects, from William C Hayes, John Hudson Thomas and John Galen Howard to John Hans Ostwald, Gerald McCue and Robert Ratcliff. Dues for the Maybeck Twin Drive Homeowner’s association are currently $600 annually and the members meet twice a year. 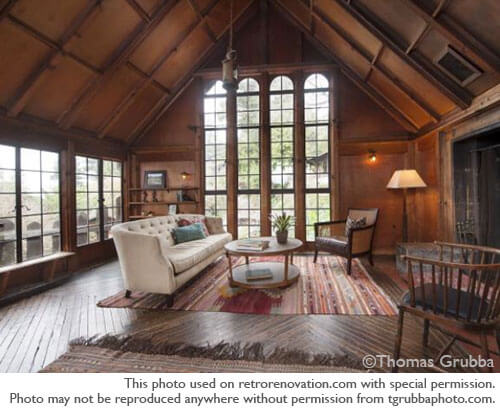 Around 1940, when Bernard and Annie Maybeck were living here, a cooking fire charred the interior but did not destroy the house. Bernard used sandblasting to remove all the blackened areas and the knotty pine panels were replaced with plywood, “a new material’, which was dyed to match the beams. The 1” honey maple floors, laid in a diamond pattern, have a wonderful patina from this period of this restoration. The interior wooden posts, walls and doors all show the wood grain, heightened by the sandblasting.

Much work has been done in more recent years to all the systems, including roof, foundation, electrical, fireplace and a master bathroom, sensitively designed to fit the character of the home, was added. The beautiful landscaping has been enhanced to showcase the house tucked into its glorious site. It has an artist’s studio with western exposure, where Jacomena Maybeck, a ceramist, spent many hours, as well as a basement and garage. Attached are photos of Jacomena turning a pot in her studio and the twins when they were little girls.

“So many joyous gatherings, so many happy memories in this house,” says Bernard Maybeck’s twin granddaughters. 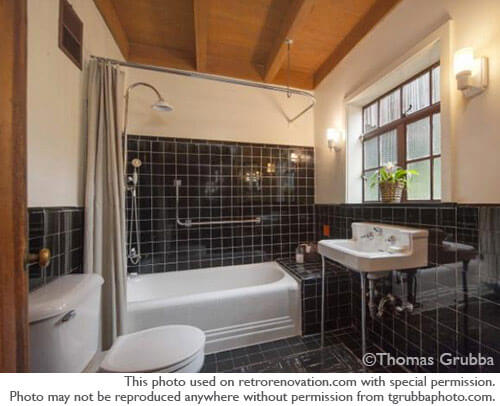 The listing does not say whether this black-and-white bathroom is original to 1932. The tiles appear to be mud-set and for sure, the sink and tub are vintage. If not 1930s, we’d guess 1950s, at the latest. 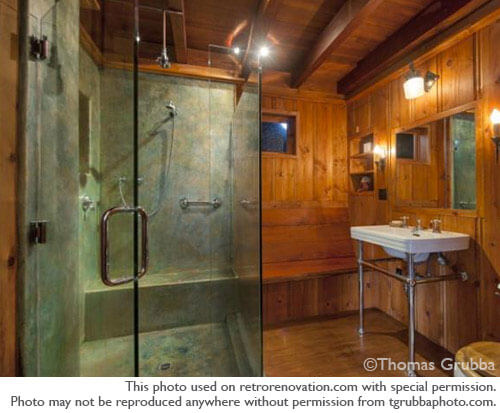 We think this is the two photos above are the master bedroom/bathroom addition referred to in the listing. Yup, the bedroom looks like it’s always been there. In the bathroom, we’re guessing the shower is verdigris-stained concrete (?), and that the sink is from Waterworks.

Mega thanks to Norah Brower, listing agent for this property for allowing us to share this magical house. Photos courtesy of Thomas Grubba Photography.

To learn more about the architectural work and legacy of Bernark Maybeck, start at the The Maybeck Foundation at maybeck.org.