Of all the mid-century historic houses I’d like to visit, Buckminster Fuller’s Dymaxion House — which has been reassembled inside the Henry Ford Museum in Dearborn, Mich. — is at the very top of my list. This is the only known prototype of Bucky’s dream home, envisioned as a solution to provide affordable housing to the masses after World War II. The Museum acquired the house in 1991 and over the next decade restored the priceless relic. The Dymaxion House — which was officially known as The Dymaxion Dwelling House — was opened to the public in 2001.

Buckminster Fuller is such a fascinating person. He had to have been one of the most genius minds of the 20th century… According to his daughter, he identified himself as a “comprehensive, anticipatory design scientist.” He is most famous for working with the geodesic dome. He coined the term “spaceship Earth”… and the word “synergy.”

The CBS Sunday Morning segment above is an excellent introduction and includes great shots of the Dymaxion house — including in a proposed subdivision. What do you think, did we miss out? Would you like to live in Dynamaxion Village?

Conceived and designed in the late 1920’s but not actually built until 1945, the Dymaxion House was Fuller’s solution to the need for a mass-produced, affordable, easily transportable and environmentally efficient house. The word “Dymaxion” was coined by combining parts of three of Bucky’s favorite words: DY (dynamic), MAX (maximum), and ION (tension). The house used tension suspension from a central column or mast, sold for the price of a Cadillac, and could be shipped worldwide in its own metal tube. Toward the end of WW II, Fuller attempted to create a new industry for mass-producing Dymaxion Houses.

The story gets pretty fascinating. Fuller created a company to try and produce the house. But only two prototypes were made before the company collapsed over creative differences. An investor, William Graham, purchased the two prototypes and in 1948, incorporated at least one of them into a house he built for his family in Wichita, Kansas. The family lived in the house into the 1970s and in 1991, donated the Dymaxion to the Henry Ford Museum.

The Dymaxion House was built of aluminum. Fuller chose this material because it was light to transport, strong enough to withstand a Kansas tornado, and because after World War II, there were aircraft manufacturing facilities with capacity to manufacture it.

The house was  “designed to be about 1,100 square feet or about the size of a small Cape Cod-style bungalow. It was supposed to cost about $6,500 in 1946.” The efficient and ingenious layout held “two bedrooms, foyer, living room, dining room, kitchen, kitchen storage, stainless steel fireplace, optional folding stairs to the balcony, accordion doors, O-Volving shelves, revolving shoe and clothes rack, tie and hat rack, and the Dymaxion bathroom.”

The Dymaxion House design at the Henry Ford was adapted from an earlier prototype designed in the 1920s. Watch the video from the Whitney Exhibit in 2008, and it appears that the original prototype had some distinct differences. Including that it would be delivered by zeppelin… which would first drop a bomb to create a crater-foundation!

Hey-Wake in the Bucky living room 🙂 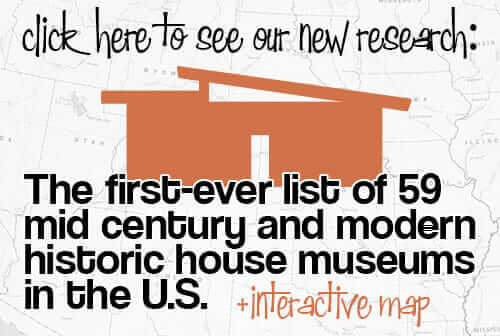 “Everybody is an astronaut… You all live aboard a beautiful little spaceship — called Earth.” – Buckminster Fuller