When Amber asked for help finding a low-flow faucet to meet water restriction requirements for her new 1960s ranch, that was actually the smallest part of her saga. Local ordinances also meant her vintage pink toilet was destined for the dumpster. But Amber did not give up the pink without a fight — she set out to find a new pink toilet that would meet the county’s water restrictions guidelines. And she did! Read on for Amber’s hilarious hijinks in toilet trafficking. Yes, you heard that correctly: Amber’s adventures in acquiring colorful commode contraband… aka fancy forbidden facilities… cute covert can… handsome hijacked head… pretty pirated privy… pink pilfered potty… indeed, a tantalizing taboo throne.

Pam writes: Okay. So now, before we dive into the fun story, we gotta underscore: Of course, we do not approve of or encourage law-breaking. Renovate Safe and Lawfully, too! The way we read this story indicates Amber is in fact in compliance because the state of Georgia is regulating the sales standard, while the county is regulating the installation standard. So, we are just having fun with our silly wordplay. I will hypothesize that at some point in the not-too-distant future, the installation standards will catch up with the sales standards — once existing sales inventory is cleaned out; I presume that regulators usually provide for a transition period to give time for manufacturers and retailers to adjust their stocks and plan for ramping up new designs to new standards. 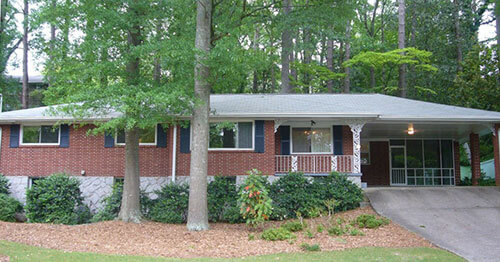 My husband and I recently bought a time capsule ranch house in Atlanta, built in 1960 and with only two previous owners. The most recent family owned the house for 49 years. After a frustrating search for the perfect house, and disappointment at being outbid on two other great homes in multiple offers, we finally hit the jackpot: gorgeous knotty pine in the kitchen and den, large picture windows in the living and dining rooms, lovely hardwood floors preserved thanks to decades under carpet, and TWO pink bathrooms. The master bath had a white toilet and sink, but the hall bath had pink everything – including the all-important pink toilet. The only problem was, our county requires that houses built before 1993 have all fixtures replaced with the “low-flow” variety before they will turn on the water. (Don’t get me started on the logic behind that requirement. Yes, we know what these low-flow fixtures are likely doing to our older, larger, cast iron pipes. That’s another rant for another time.) 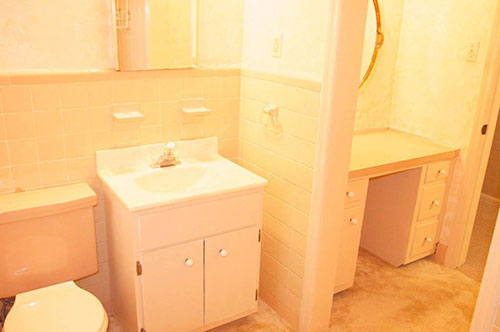 While at first I thought maybe I could concede to putting a white toilet in an otherwise all-pink vintage bathroom, the more I thought about it, the more annoyed I became – and the more determined to find a solution. The home inspector had made the tantalizing comment, “You can still get pink toilets – you just have to special order them.” But that’s all he knew. So I started searching. As always, my first stop was Retro Renovation.

I came across this post, which indicated that Gerber had some colors available. I tried searching on Gerber’s web site as the post indicated, but came up with nothing, so I called Gerber’s customer service. They told me that YES, Bahama Pink is still available for the Viper round-front toilet (model number 21-502), and gave me the name of a Southeastern representative. This person gave me the name of a local plumbing supply company that could order the toilet for me. I called the company and was all set to order, until I heard, “Well, there’s just one problem. Legally, I can’t order this toilet for you. Last year, Georgia passed a new law: all new toilet sales must be 1.28 gallons. This one is only available in pink in 1.6 gallons.”

To be clear: a 1.6 gallon toilet was sufficient to pass the county’s ordinance, but apparently not good enough for the state! So I asked, “What are my options?” The reply: “Do you know anyone in Tennessee?”

No, but my mother lives near the South Carolina border, and among the many illicit things residents of Georgia travel over the border to acquire or partake in – fireworks, cartons of cigarettes, pornography, gambling – a pink toilet would be a positive addition. So I called my mother and asked if she would help me in my pink toilet trafficking; she agreed. I placed another call to the Gerber southeastern rep, who informed me there were no companies in North Augusta, SC who could order it; the closest was Columbia, SC (an hour away from where my mother lives). Well, I had come this far; what was a short road trip?

I called Gateway Supply Company in Columbia, SC, and spoke with Caroline – who was surprised and amused to hear that I wanted to order a pink toilet! She suggested I order a pink seat from Bemis, so I did. The order would take about two weeks to come in.

I called Caroline periodically to check on the status. When she told me the toilet would be arriving on that day’s truck, I made plans to head to my mother’s house the next morning. I was about 20 minutes out of town when I got a call from Caroline. The toilet was there, but the bowl was broken! They could hear the pieces rattling in the case. It would have to be reordered! Fortunately, I found out that the county would allow 30 days from the date of closing to submit a certificate of compliance – so we would not have to choose between water service on the day of our move-in and an out-of-place white toilet.

Finally the day arrived – the replacement pink toilet was in, and in one piece (well, two pieces: tank and bowl). So, I traveled to my mother’s house on a weeknight, and bright and early the next morning, we set out for Columbia.

When we got to Gateway Supply and I introduced myself to Caroline, she gave me another piece of information – this pink toilet was actually the third order to arrive for me! The first replacement had been the wrong color! But no one had told her that… they had just reordered it in pink. Apparently my pink toilet had become quite the story around the place. As Caroline walked through the warehouse with us, she simply called to one of her coworkers, “I need the pink bowl.” “Oh, the pink bowl? Got it!” Enough said… everyone just knew!

Big thanks to Caroline, by the way. She was awesome throughout the entire process – a real pleasure to work with. I would recommend Gateway Supply to anyone in Georgia looking for an illicit toilet! And I am happy to be the nutty Pink Toilet Lady whose story makes people laugh. All my coworkers followed the play-by-play with me. I told it to our loan originator and he told his whole office, too. And of course my plumber got a big kick out of installing a pink toilet! 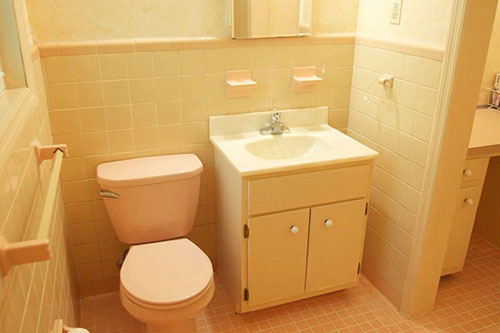 For the record, the Gerber Viper round-front not only matches perfectly in terms of color, but aesthetically it blends seamlessly with midcentury design. It even has a cool retro-looking flush handle. If you didn’t know any better, you would think it was original to the house.

We still have a fair amount of work to do to the bathroom, as time and finances allow – paint, new hardware on both vanities, new light fixtures, and ultimately replace the sink and vanity with a vintage pink Crane wall-mount I’ve had stashed away for years “just in case.” But for now, I am content to know I have saved a pink bathroom!

Mega thanks, Amber, for sharing your story with us — and congrats on your pink potty victory.

Thank you also, Amber, for being the one who alerted us to the availability of this pastel toilet — which also comes in other colors. We wrote about it here. Which then prompted another reader to tip us to Gerber, which also has sinks in toilets in retro pastel colors. Six years into the blog, and we’re amazed to still be uncovering sources like this — thanks to our dear readers!