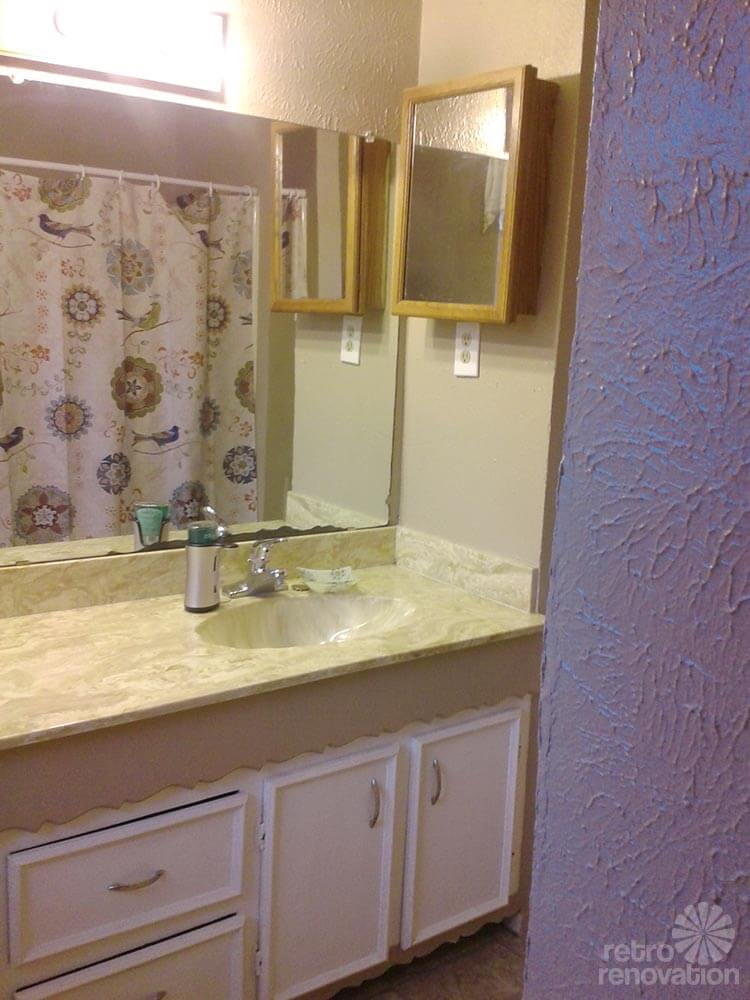 Reader Terri needs our help beautifying her 1960s bathroom, which received some 1980s updates that she will some day replace. Ultimately, Terri would like to replace the floor and vanity top. But for now, she’d like to work with what she has using paint, accessories and new light fixtures to help her love the house she’s in until she’s ready to commit to the more costly, longterm fixes. She’s given us an inspiration photo — and a letter — so read on, and get ready to offer your best design advice. 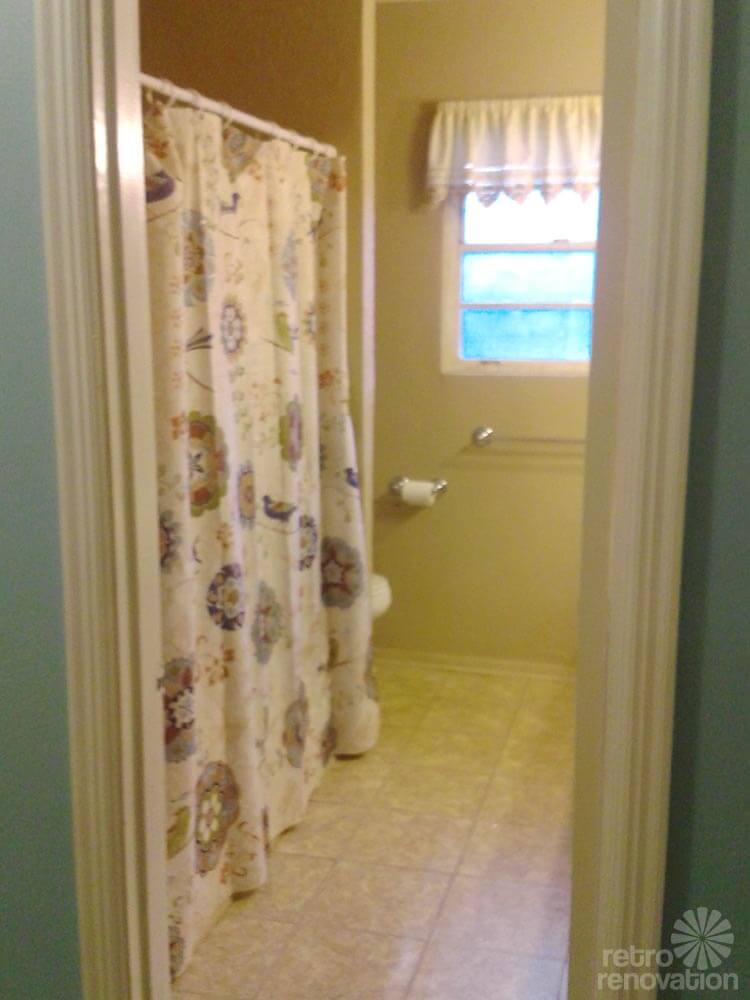 I made the mistake of asking an interior design discussion website for help in sprucing up my vintagey bathroom! Of course no one listened to me when I told them I wasn’t removing the vanity and sink, flooring, etc. Although some day I might like to do that and put in something else, especially the sinks, as they are QUITE worn and cracked,  it just isn’t happening any time soon budget wise. So I picked out a 60’s-ish shower curtain ( which the design discussion site people all told me they didn’t like, but I love) Something to try to distract the eye from the cultured marble expanse on the other side! 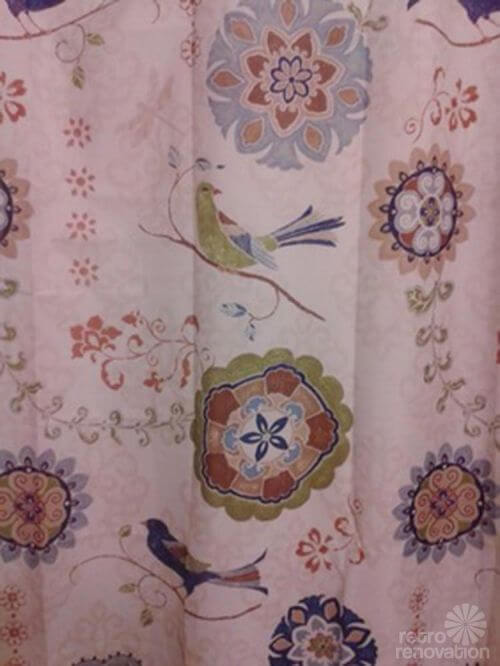 I may have originally said I would want to keep the shower curtain, but I am not adamant about that anymore! 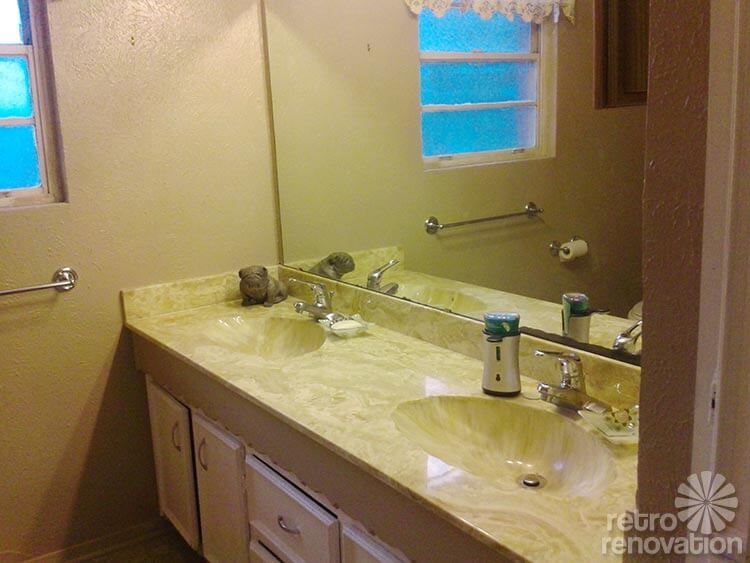 But what to do with the vanity (paint?), the window covering, the wall paint color, the lighting fixtures? The medicine cabinet is going bye-bye. No wallpaper because of the texture on the walls. 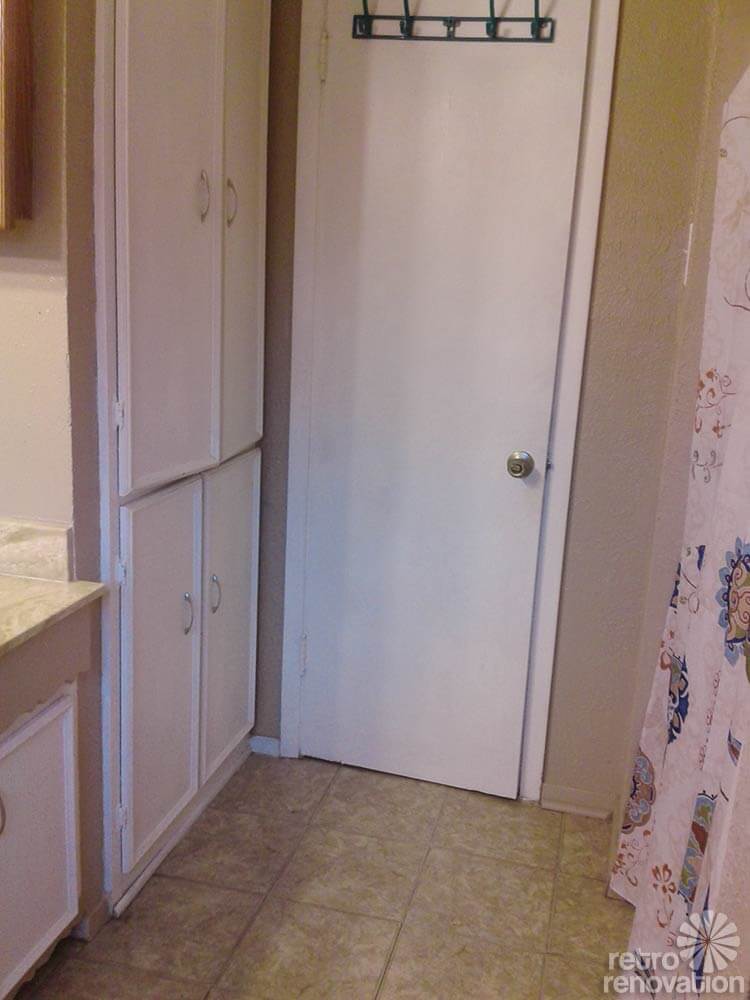 Thanks again for being a LOVE WHAT YOU HAVE place to go when we don’t want to gut everything.

Ok readers, let’s give Terri some ideas for paint, accessories and light fixtures. 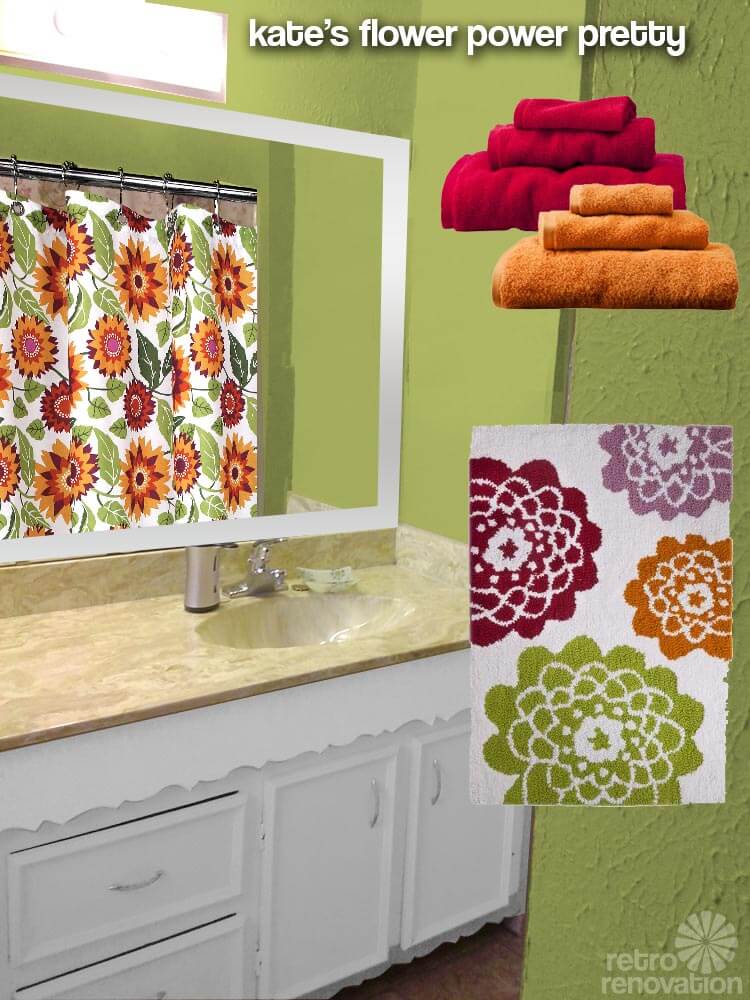 Both Pam and I agreed that the main problem with Terri’s bathroom was that is was just too blah. Too much beige, not enough color, despite Terri’s attempt at adding some with the shower curtain. We like the pattern on the shower curtain that Terri chose, but the colors are to “muddy” to add the needed life to Terri’s space.

Whenever you are building a color scheme for an otherwise neutral bathroom, it is best to start with the shower curtain. Finding a shower curtain you like can help dictate the entire room’s color palette and really pull the space together. Pam found this Park B Smith Botanical Garden shower curtain at Bed Bath and Beyond for $25. The bright, happy colors really brighten up Terri’s bathroom. Then it was just a matter of choosing a color from the shower curtain to paint the walls. I chose the lighter, limey green because it looked good with the vanity top and I got the idea that Terri liked green from her “inspiration bathroom.”

Next I would paint the entire vanity a crisp white, to make it feel clean and fresh. As you can see in the mock up, above, I tried “painting” the vanity green to mimic Terri’s inspiration bathroom. But alas — I felt that any shade I tried made the vanity — and that vanity top — a focal point. Perhaps in this case, that does not make sense, because Terri is trying to downplay the vanity top. So instead, Pam and I thought that ‘neutralizing’ the vanity and that vanity top — letting it recede — while adding strong color to the walls instead — could create the same colorful look Terri was going for.

For the towels, I would pick up one or two other colors in the shower curtain pattern, such as the red and orange. I found a rainbow of colorful towel options at Target in their essentials collection — including the “ripe red” and “super orange” towels shown above. Another Target find — this colorful flowered bath rug — coordinates with the shower curtain nicely. Of course Terri could also choose a solid rug in a coordinating color.

Both Pam and I agree that Terri’s Hollywood bathroom light fixture is a classic choice that works well in the space. We noticed Terri’s bathroom mirror was delaminating a little around the edges and thought instead of replacing it, she might want to simply dress it up by adding a frame.

After searching around, I found Mirror Mate  — a company that makes custom sized frames that stick on to an existing bathroom mirror — which might work well for Terri. They don’t have any shiny chrome options, but their Broadway Brushed Chrome Slim Line bathroom mirror frame would look nice in Terri’s bathroom. The company also has several white frame options to consider.

I think the key here is to add some bold color to pep up the otherwise drab color scheme in Terri’s bathroom. Since Terri is on a budget, changing paint, adding a bright shower curtain and getting a few new colorful towels should allow her to make a change that will make her happy with her bathroom until the day comes when she can do a proper remodel of the space. 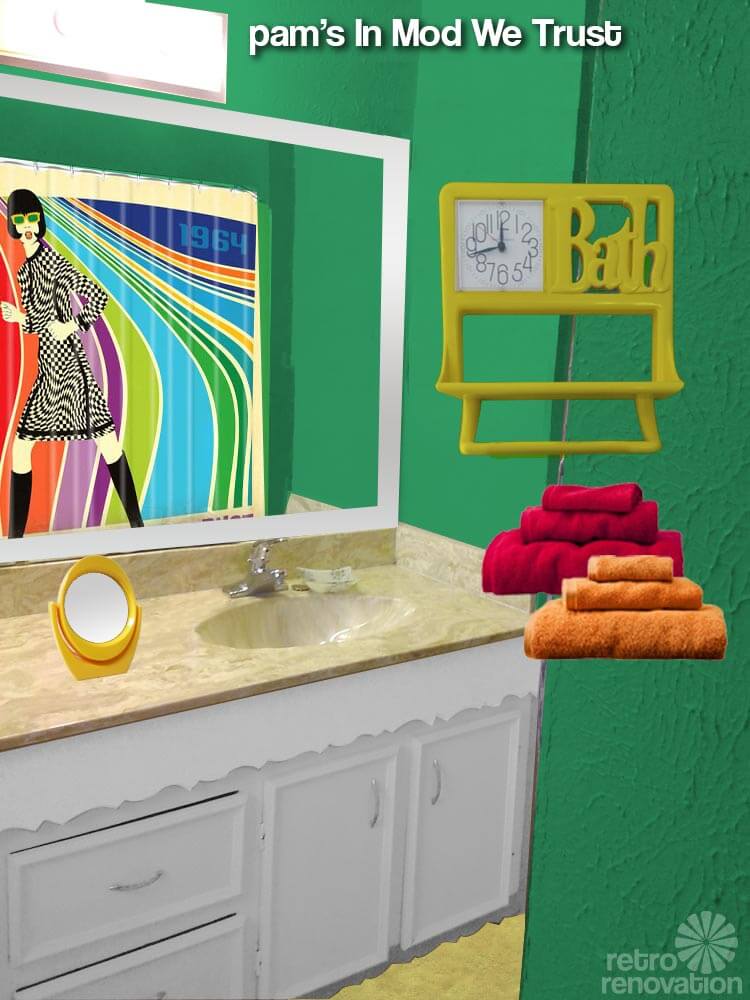 Oh you know me. I love me the crazy color. I saw this 1960s style “In Mod We Trust” shower curtain designed by Anderson Design Group for DENY, and I just had to see what it looked like in your bathroom, Terri. I agreed with Kate that based on your inspiration photo, the shower curtain you now have is “washed out” color. You can certainly go that route — heck, all the current fixtures in your bathroom are so neutral, you could go any color. But I do tend to think that adding the more saturated brighter colors well… brighten the space up — which seems to be your goal.

Once my mod shower curtain was in place, Kate and I tried a few of the different colors from the curtain as a wall curtain. Here’s the green — similar to the one in your inspiration photo. I then decided to go with an analogous color accessory set — yellow on the bath shelf from etsy seller TheGingerAppeal (spray paint it with a paint formulated to adhere to plastic)… on the mod mirror from etsy seller RavishingRetro (put bright color on that beige vanity top to brighten it up) and yellow in the fluffy, machine-washable cut-to-size carpet by Royale at Town House Linens (to cover the 1980s beige tiles). Then, how about orange and red towels – from the same collection at Target that Kate found. I tried the mockup just with orange. But then I added the red back — it adds a pop of strength the complement the strength of the green paint.

Thanks, Terri, for submitting your project! We look forward to finding out what you decide to do!

UPDATE: Thanks to all of the reader comments and advice Terri received from our Retro Design Dilemma, she was able to choose a direction for her bathroom. After some new paint and accessories, Terri is thrilled with the results. 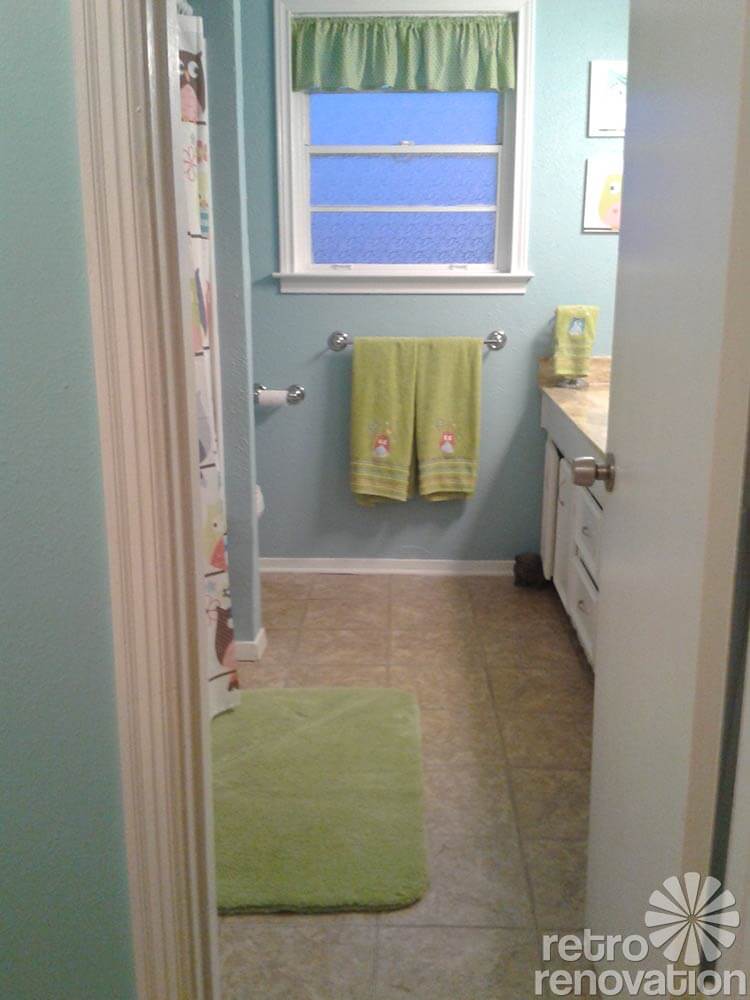 The bathroom is FINISHED! Well, nothing for me is ever really finished, still could use a couple accessories… but at least ready to show off. I would love the readers to get an update so they can see how it went. 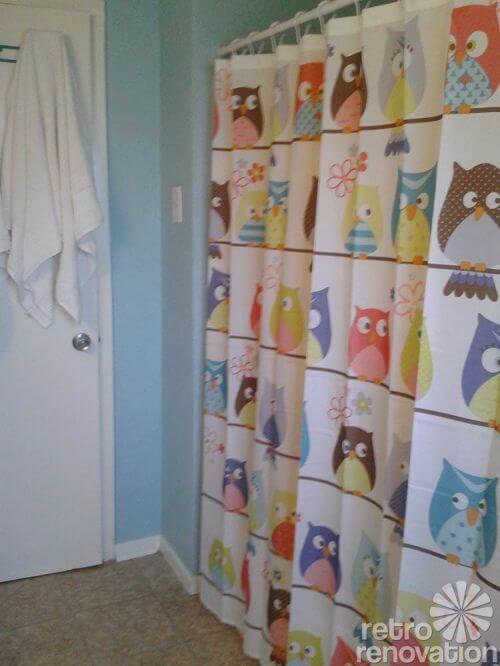 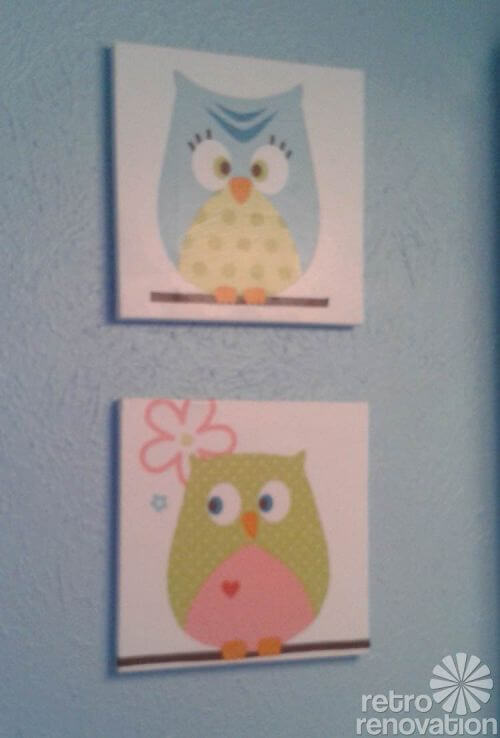 I tried to get a blue-ish color to match the owls, but it came out a little blue-er than I would have liked. But it works. I bought a second shower curtain to make a curtain but didn’t quite like it, so I cut out a couple owls and modge podged them to canvas frames bought at the craft store and used a green polka dot for a valance. Oh, and what a difference a new door knob makes! 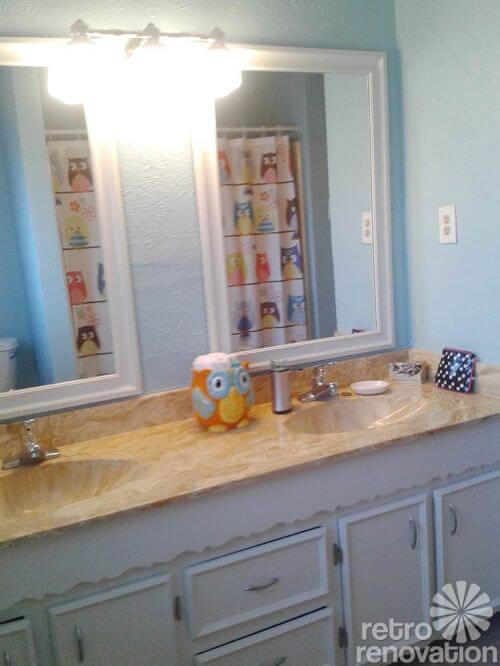 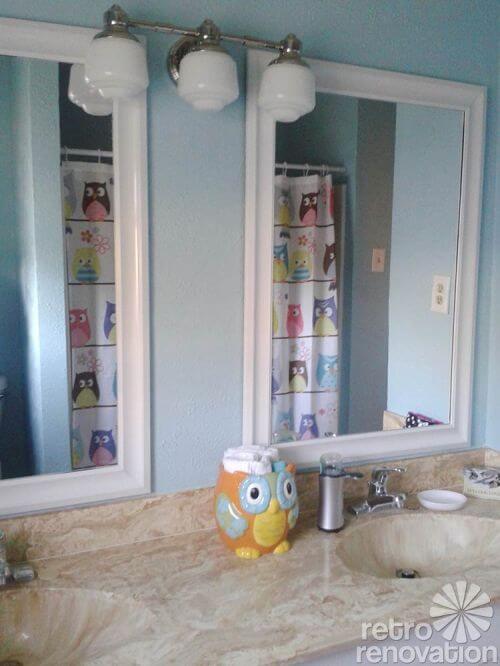 The bright crisp white on vanity and trim made a huge difference! I got a new light fixture and new mirrors and whamo! I am really happy with it. Thanks for giving me the courage to break out of the blahs. 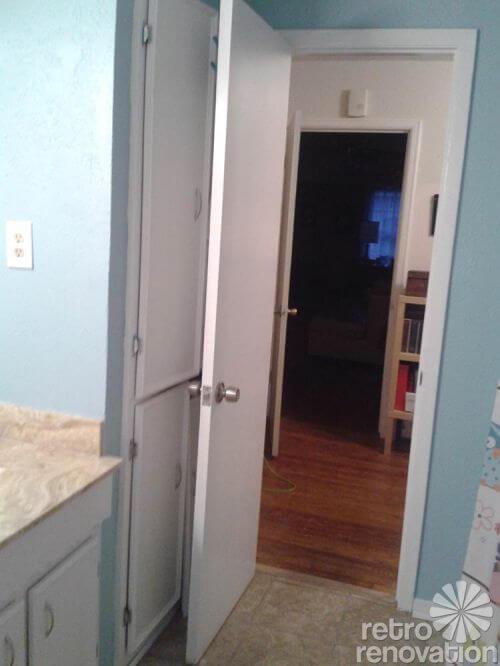 Thanks for all of your and everyone else’s suggestions!

What a difference a little color makes — great job Terri. Thanks so much for taking the time to share your “after” photos with all of us.