Skip to content
An architect and an artist’s warm & playful home,
where they lived for nearly 60 years — 57 photos 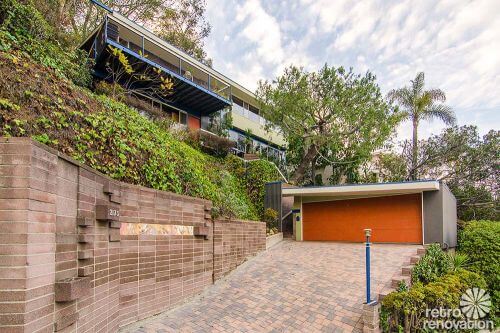 Today, a magical 1954 time capsule home… and the heartwarming story of a talented and creative couple who built it — and then lived in it for nearly 60 years. Architect Albert P. Martin and his wife, artist Gloria Martin, moved to California in the early 1950s and soon after, designed and built — much of it literally, with their own hands — this 1954 house in the Silver Lake area in Los Angeles. The house was recently listed for sale by realtor Brian Ades, of Sotheby’s International Real Estate. For this story, we not only obtained Brian and the photographers’ permission to feature these photos — but Brian also connected us with Neil Martin, one of the Martin’s sons, who told us more about his parents, the history of their collaboration to build it, and about some of its special features. And, Brian provided additional historic photographs — fabulous! 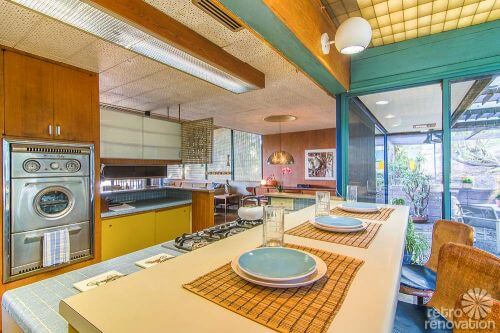 Link love thanks also to Shooting LA Photography, who sent us high resolution photos — which allow us to “zoom in” on some of the home’s unique features. And mega thanks also to Facebook tipster Pam, who saw this house featured on Curbed LA last week and brought it to our attention. There were a few other tipsters, too, thank you, all, and keep the time capsule tips coming, they are eye-popping amazing.

Brian Ades told us that the house was originally built on two lots. The second lot is now being split from this home and is for sale separately.

There are so many reasons that both Pam and I adore this house. Let us begin to count the ways:

His parents, Neil told me, were both students at Cooper Union in New York in the late 1940s. They married, and his father went to architecture school at University of Pennsylvania. After that, the couple moved to California, where Albert landed his first job in commercial architecture. 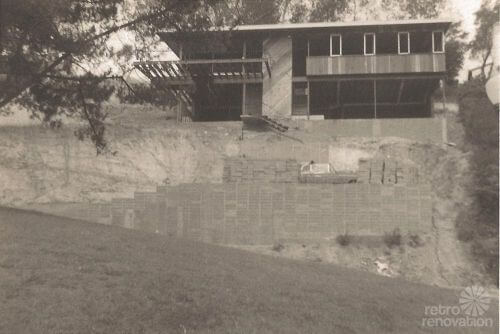 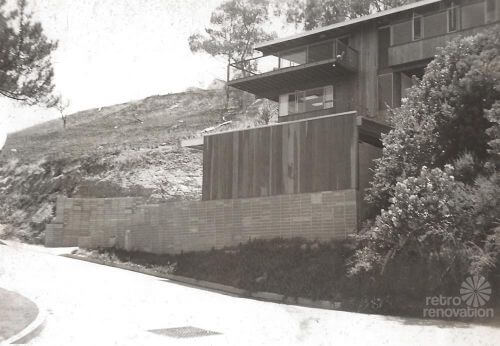 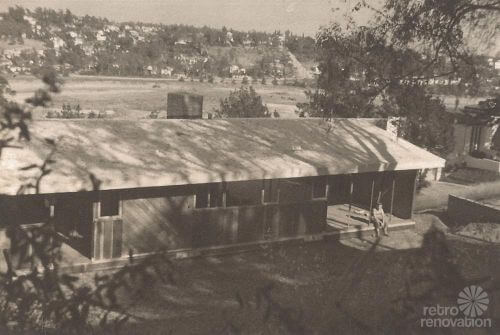 Soon thereafter, they bought this lot, Albert designed the house, and he and Gloria got started building it. “It’s even better than that,” Neil told me. His parents not only worked as their own contractors, but they personally built much of the house themselves. Family stories tell of Albert and Gloria putting up beams together. “My mother is holding the beam, while my dad is attaching it. ‘Don’t drop it,’ he says. ‘I’m not going to drop it,’ she says. ‘Don’t drop it,’ he says. ‘Hurry up, I’m getting tired,’ she says….” They survived the beams and went on to raise three children in the house. The bedroom with the rickie tickie stickies belonged to his sister, Neil confirms. 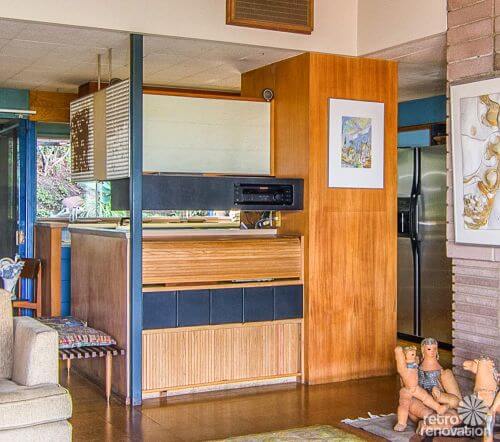 As far as he knows, Neil says, Albert and Gloria did all the interior finishing themselves. Obviously, they were talented creatives, and they brought each surface to life. They built the kitchen cabinets. Albert built a tambour-doored media center in the living room (shown above). Neil says it includes an entire stereo complex and drawers sized to hold reel-to-reel tapes. 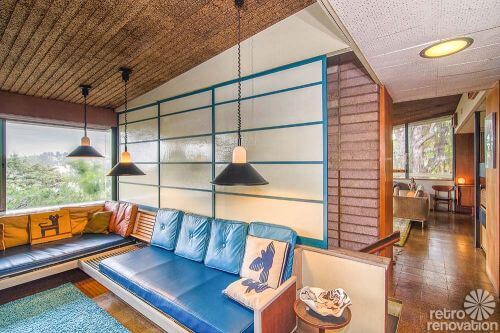 They built much of the furniture themselves. 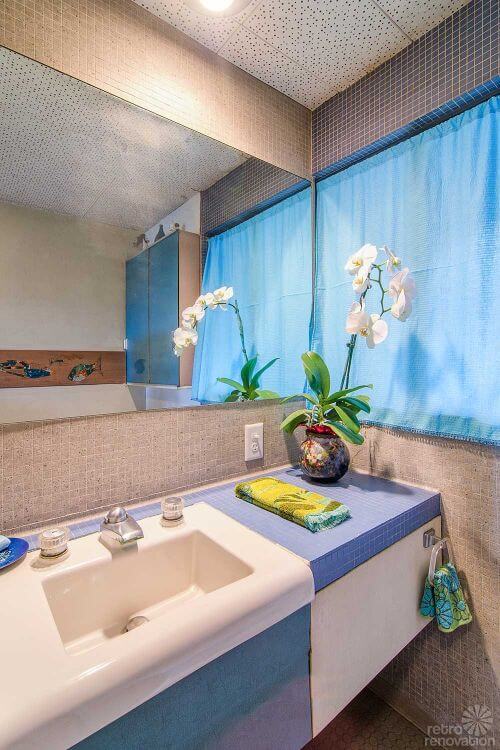 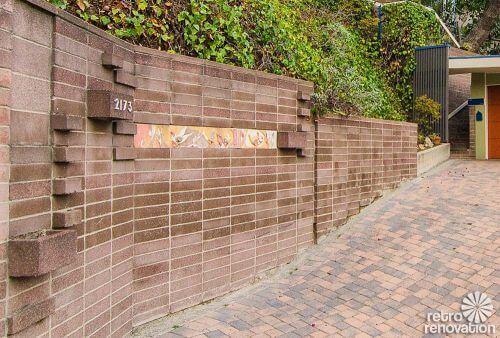 Gloria chose the tile for the kitchen and bathrooms and did all the tiling work herself. An artist who over her lifetime worked with a variety of media, Gloria made the decorative tiles in the retaining wall leading to the garage (shown above.) At one point, there was a kiln in the garage, Neil said. Tidbit: Gloria Martin also carved heads and other works for the Pasadena Rose Bowl Parade, for 17 years. But, she was no old-dog-no-new-tricks: In recent years, she worked on the computer to create art. I love this couple! Love them! 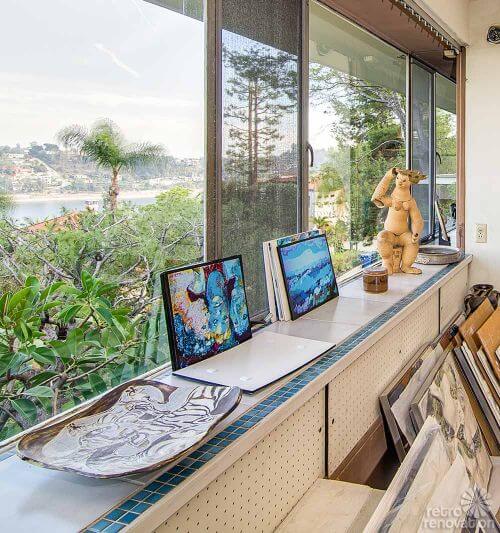 Gloria was a teacher, too. She taught sculpture to the blind at the Braille Institute right up until her death at age 85 last year, Neil said.  Over the years, Gloria’s art filled the house. It still does. Even so, Neil says that the family has removed even more. They will sell the remaining artwork and furniture after the house is sold.

Neil says that his parents’s DIY drive came from the fact that they were “depression-era folks, who had no debt. They paid cash for the lot.” Yes, such were the values of so many people building these homes after the war. <3

A bit more on Albert Martin: As an architect, Martin focused on commercial buildings, not single-owner homes.

For the first 15 years of his career, he worked for Daniel, Mann, Johnson and Mendenhall, Architects, as a project architect, then a project director A famed project during this period was the Marina City Club in Marina Del Rey, Neil said. 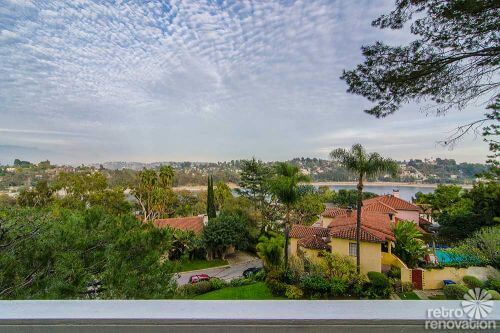 I asked Neil what it was like growing up in such a house. He quickly replied, “It was normal.” A moment later, “I grew up thinking everyone had a view.” He said he spent his childhood on his bicycle, riding all around Silver Lake. “It was a bummer to ride your bike up the hill,” he said.

I also asked Neil for his opinion on the house’s most notable features. He points first to the nifty engineering. The house was built “on steel beams with 4′ square verticals”, he said, so there are no load-bearing walls. This meant that his parents could completely finish the top top floor — the living space — first, and move in. They finished the bottom level later, over time as they had the money. Next, he points to the plumbing system, which he says is all grouped into one 12′ square area that is accessible from the lower level. And, he made sure we noticed the stereo complex that his father built in the living room.

What does he think of all the attention to the house now, I ask?

“For a long time, this house would not have been considered anything special. In the mid-70s…. just another old house.” The attention now, “It’s kind of neat,” he said. But a “challenging thing,” too, he added, to have to clear out his parents’ lifetimes’ worth of accumulation. What to do with the thousands of family photos? This is something we all must face!

A look at some of our favorite features in this time capsule house: 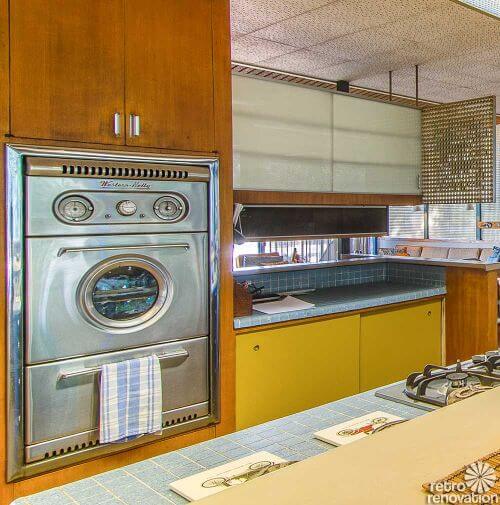 We have a big slide show, below. Meanwhile, we will point out a few favorite features and opine. Above: A gorgeous Western Holly wall oven in the home’s mostly original kitchen. 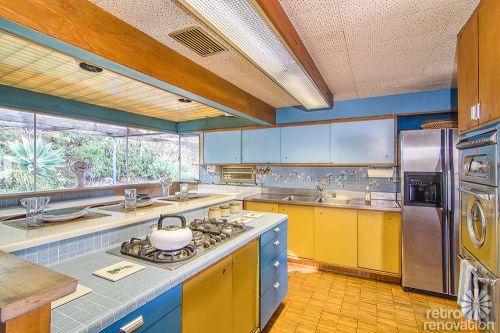 Above: We bet this is a super efficient, super functional kitchen in which to work! A genius layout, maybe even. 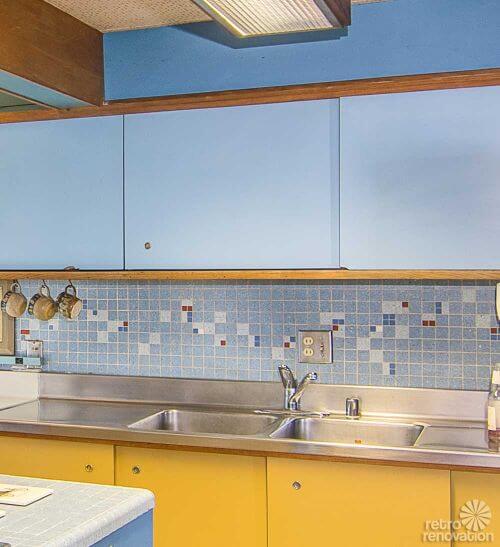 Above: We love all the tile work in the kitchen. We also love the stainless steel drainboard sink. And remember: Albert and Gloria Martin built all these cabinets themselves! 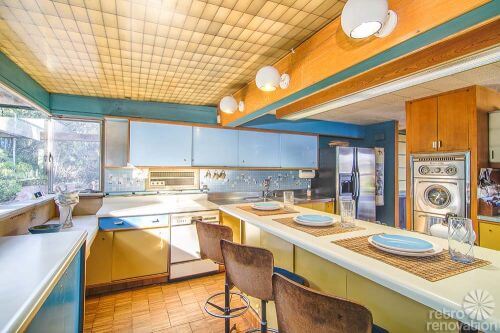 Above: Light pours into the kitchen from the many panes of glass, and the cheery blue and gold color scheme gives the room a playful feel.

Above: Another intriguing aspect of this space is the ceiling. Look at all of the light, line, shape and texture going on up there — not just on the ceiling — but also in the globe light fixtures. Realtor Brian Ades told us that an expert who viewed the house said there were numerous features that came from the world of commercial architecture. We’re guessing that lighted ceiling is one such feature.

Above: The working space half of the kitchen ceiling is a mix of box light fixtures and acoustic ceiling tile with a small round hole pattern. Again, it seems relatively easy to see the influence of commercial architecture on this decision. 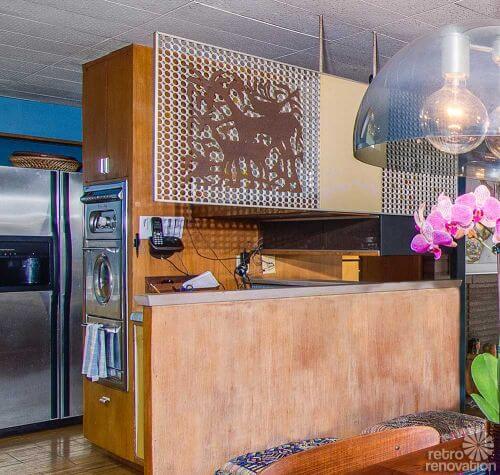 Above: The divider between the kitchen and the dining room features a textural metal screen. 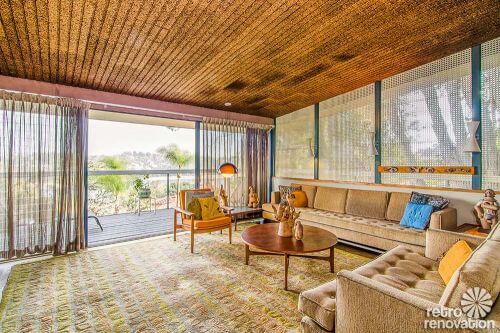 The main living room of the home may not have quite as much color as the kitchen, and again it is a feast of texture. The ceiling appears to be some sort of ribbed cork planking — Nice! 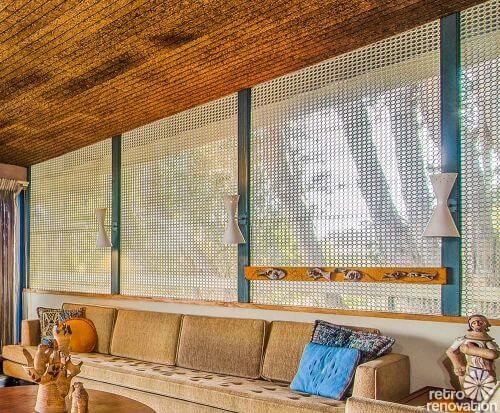 Above: The windows over the sofa appear to be screened with the same material as the room divider between the dining room and kitchen. We need to find out more about these! 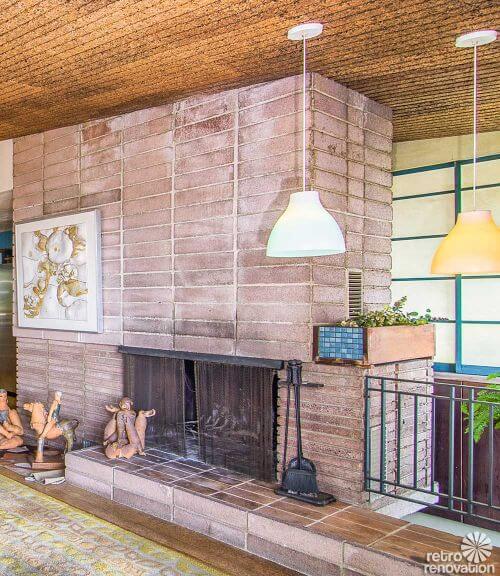 Above: Notice the blue mosaic tile on the end of the planter in this photo. It reappears several places throughout the home.

Above: Looking at this art studio photo again, you can see the tile from the fireplace planter repeated on the window sills. Clever sliding cabinets made of pegboard mirror the kitchen cabinets. Another fun feature to note, it looks like the window sill continues into the adjoining room, forming a small passageway that provides unobstructed views, and likely additional ventilation. 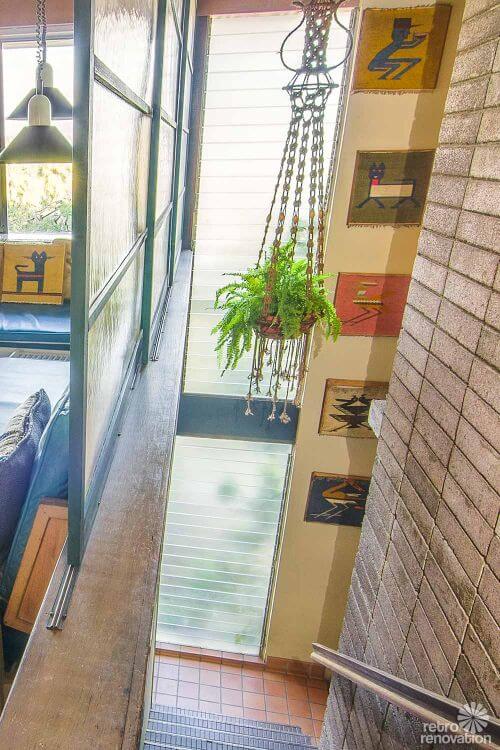 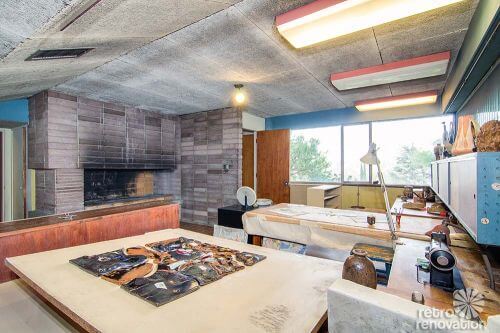 On the lower level, a large room with a well-used fireplace in Gloria Martin’s studio. 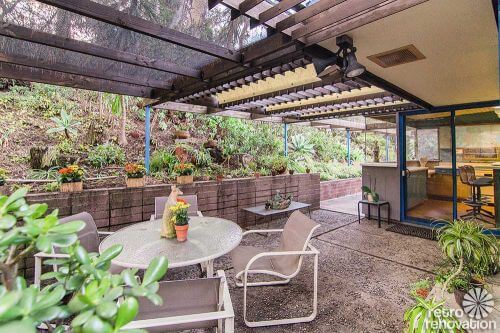 Above: There’s nothing I’d love to do more at this very moment than to relax on this amazing covered patio off the kitchen, don’t you agree?

Mega thanks to Neil Martin, for telling us about the history of this wonderful house, and thank to you and Brian for sharing the historic photos. Thanks to Sotheby’s realtor Brian Ades for allowing us to feature this property and for being such an enthusiastic help — and good shepherd of the mid mod! In his most recent update to us just yesterday, Brian said that more than 400 people came through the house in the first 72 hours it was on the market — there were two open houses. Visitors architectural buffs and buyers from as far north as Mill Valley, he said. And, thanks to Wasim Muklashy of Shooting LA Photography for supplying us with such gorgeous photography.