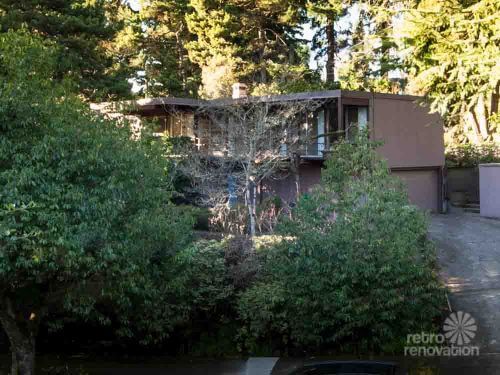 To be sure: This is Portland, Oregon time capsule house living at its best! Alyssa Starelli, one of our favorite mid mod realtors, gave us a head start on showcasing this woodsy 1958 time capsule house, new to the market. Not only was this beautiful California post and beam house architect-designed, but it also was a gathering place for movers and shakers at nearby Reed College — with stories attached that make it all the more interesting. In particular: The son of the original owners tells us how Steve Jobs — a former student of nearby Reed College who stayed to audit classes there  — ended up at this house one day, where Reed professors and staff gave him some career counseling. 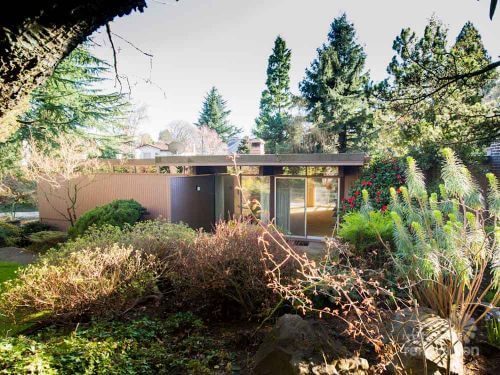 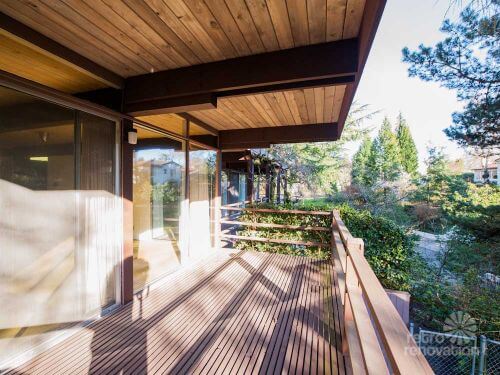 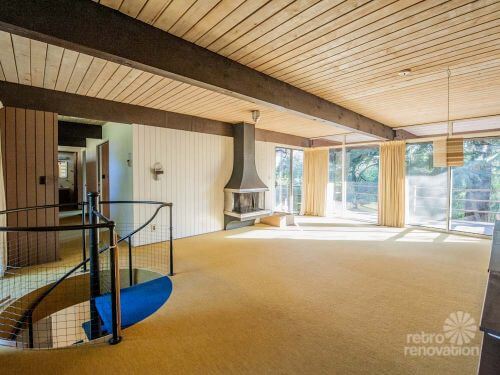 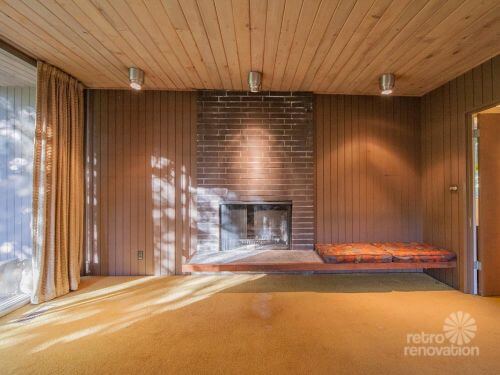 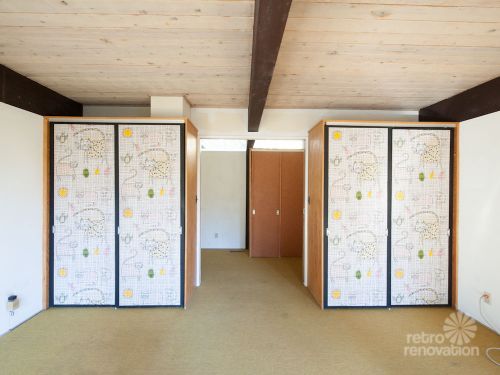 Aly provide this information about the listing:

The owners, having moved from a mid-century home of modern design in the Pallisades area of LA, commissioned Frank Shell of Shell Hoyt to build a “California style post & beam” home for them in the East Moreland neighborhood of Portland. They finished out the 1958 home themselves, hand staining cupboards, laying tile, installing fireplaces. This home is truly a labor of love and with the exception of carpeting and appliances, is 100% original to the mid-century. One owner home, even the addition was designed by Shell.

This mid-century modern home, for sale for $605,000, boasts post & beam construction with floor-to-ceiling windows on both levels, a 16×24 great-room with fireplace, a family room with cantilevered deck, 4 bedrooms with either balcony or garden access, 3 full baths, an easily accessed laundry area, a 2-car attached garage, and additional storage bay.  Large private .25 acre lot with mature landscaping and second ‘boat-house’ garage. Updates include: welded-seam roof w/ 6″ of insulation, double-pane windows, gas furnace. Situated between two fantastic SE neighborhoods – Westmoreland and Woodstock –  with the best schools, great nearby amenities including parks, ponds, gardens, golf, boutique shopping & restaurants. Reed College is mere blocks away and offers its own amenities to the community. This is truly a dream locale.

This home has quite a history – visited by some of the world’s foremost movers and shakers like Apple’s Steve Jobs, or the fashion world’s Emilio Pucci, and more.  The owners, Carlton Whitehead and Dorothy Blosser Whitehead, were quite involved with Reed College, and as Carlton was the Assistant to the President of Reed for over 30 years, had the opportunity to entertain many students and alumni whom proved to be great successes and returned throughout the years. 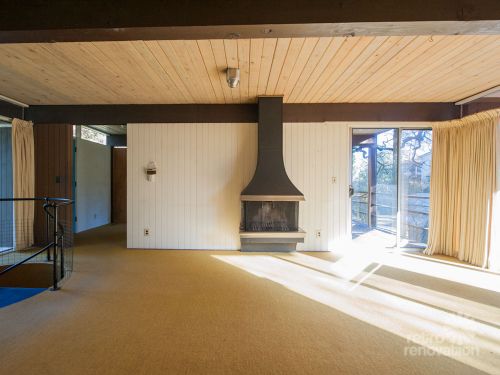 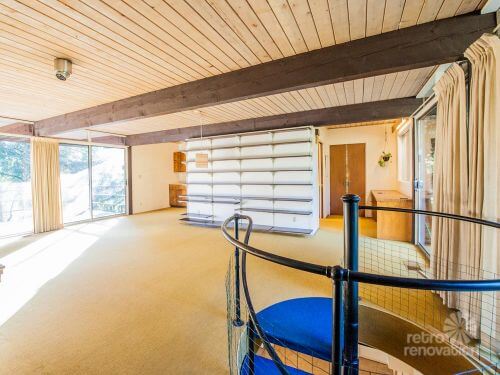 Above: A full wall of KV shelving. 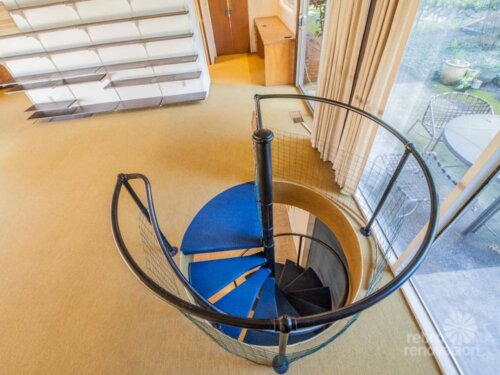 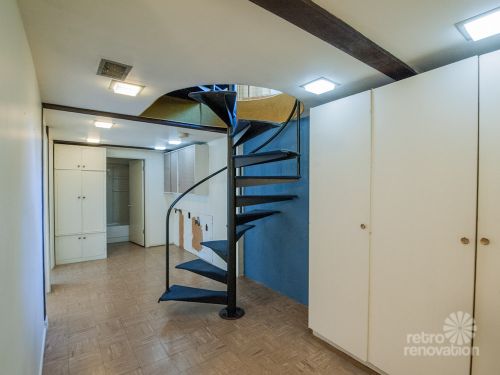 This is a beautiful house in a beautiful location, no question. But I was equally — maybe more so — interested in the story of Carlton Whitehead and Dorothy Blosser Whitehead and their many visitors, because I heard the story was a good one. For this, AlyStar connected me with their son Eric Whitehead, who wrote the following little memoir for us… I don’t think he had a lot of time to do it…. so it’s fresh and real… a loving tribute to a house, a home, a family…

Now, where to start…

We lived on the Reed  campus the first three years of my life. Dad and Mom built that house for around $25,000 including the land, which was purchased from the Teeple’s (sp) who owned a block between Woodstock and Martins. He [Mr. Teeple] was an inventor, a great friend of children (He made us badminton birdies that could be used on windy days, but we had to use tennis rackets because they were so heavy. And he built an electric car that the older kids would drive up and down Moreland Lane.) Their old house is still there. The huge fir trees behind us was a middle section of his old property. He put up a fence between his yard and ours that had a huge gate in it so we could visit whenever we wanted. Across the lane from them were Sam and Jean Moment. Jean was a fairly important Oregon artist and Sam… I never knew just what it was he did. Jean was a sweetheart and has gifted us some of her works.

My Grandma told Mom, when I was little, that I needed to have a place to dig. The far NW corner became a mecca for every boy in the neighborhood ’cause we were the only yard around that had a “dirt pile”. We dug huge holes, covered them with plywood left over from construction of the house, threw dirt over the top of them and would crawl inside. Our own “cave”. I think one hole held four of us. Dad caught us trying to dig a tunnel into the next yard. Pretty much put the kibosh on that.

Then we’d fill the holes with water and play with toy boats. This went on for years. Drove Dad nuts.

See? … There’s too much to that house that raised a family. Let me try this…

After the house was mostly built, Dad and Mom put a lot of sweat equity into it. We tiled all the floors ourselves. Tiled the bathrooms. Dad cut the Formica for the downstairs bath. Did  most of the finishing of the basement. Painted, inside and out. Installed the fireplace (after the hole had been cut in the roof, a huge rain storm came in overnight and flooded the house upstairs and down, much to the delight of all us kids.)

The kitchen cabinets were built in the garage, then professionally stained so they’d match.

We’ve built boats in the garage. We repaired our own cars, and drove them as long as we could. We camped in our own house after the Columbus Day Storm because we were without power for over a week. Coleman stoves,

Coleman lanterns, fires in the fireplaces and sleeping bags on the beds. Life went on.

In the “Fame by Association” department. Elizabeth and Hal Hirsch were dear family friends. John and Annie Hauberg, John Grey (Sun River, Mt. Hood Meadows), former governor Straub. It goes on and on. All this was a connection to and with Reed, and Dad’s political life.

There was one small young man once, who thought Reed was a place he should be. He didn’t enroll, but spent his days auditing classes and living in Reed’s semi-remote center, the swamp. Some professors and administrators, seeing that this was not the best course for this boy-man at the time, gathered themselves together, brought this young soul over to our house, sat him down on our couch, and with martinis all around, gently told him that what he was was searching for was not likely to be found with his current methods.

This careful prodding may have been the turning point for this brilliant mind to move on to change the world.

Yep… Steve Jobs.
In that house…
Where we built boats….
Did our own carpentry…
Fixed our own cars…
Hope this helped. Gawd, it’s so incomplete!

Thank you, Eric. We can only imagine how hard it is to let this home go. But I suspect, the new owners will appreciate it very much.

Thanks to Alyssa Starelli and the Whitehead family for giving us permission to showcase this home and keep it in our forever-archive. Thanks also to 22 Pages Photography for the beautiful photos and permissions, they are on Facebook too.