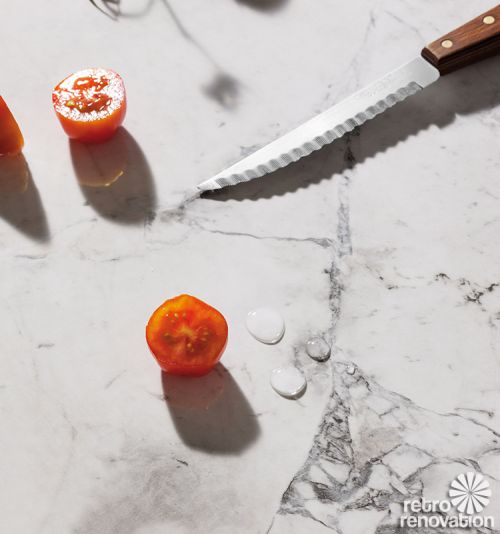 Formica last month introduced a new Carrara marble laminate — Formica Carrara Bianco 6696-46. Previously, I had identified three places you can find Carrara-style laminate. This Formica design now makes four. Moreover, because of its available #46 etched surface — which mimics fleabite pits you likely would see in the patina of real, aged marble — it now my favorite choice among the Carrara marble laminates on the market today. I asked Formica to send me a large sample, which they did — and I really like the fleabite etching. It looks and feels great — gives the laminate a very natural look. 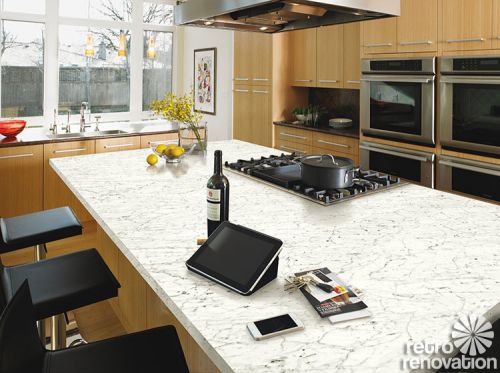 I do not know when a marble laminate like this was first introduced to the market. But I do know that most early laminates were designed to mimic other materials — like linoleum. And, by 1969 I know we had Formica White Onyx — which is still available today. Formica’s White Onyx is the oldest pattern in Formica’s range (there are some solid colors that are older, though).

Update: I checked Grace Jeffers’ thesis on the history of Formica. She says that “Cremo Marble” laminate was introduced in the late 1950s and that it became an instant best-seller. The pattern was discontinued in 1983. So: Appropriate for a 1960s and 1970s kitchen, I’d say!

That said, I also associate Carrara marble with pre-war kitchens — not post-war kitchens. Doing a 1900s-1930 farmhousy kitchen? Go for it, too!

For bathrooms, I would probably consider Carrara marble for both pre- and post-war bathrooms, though. I think it would be “okay” in a postwar bathroom because that’s a smaller space.

If I liked the marble look, I would actually prefer a marble laminate in my house — because (1) it would be way cheaper to use laminate than marble… (2) marble is notoriously porous and stains easily, and 3) I don’t like the idea of the environmental degradation caused by mining when laminate would work just as well on a counter top installation, maybe better. When I worked in the sustainability field for a while, I learned the concept of “Material Utilization.” I *think* I learned that, at its heart, sustainable material utilization means using resources — especially finite resources — toward their highest possible cause. I don’t have the data, but my hypothesis is that: Mining marble and granite to use as kitchen and bathroom counter tops is not the best possible use of those finite materials and the energy to process them, when alternatives like 70% paper counter tops (laminate) can do the trick and at a fraction of the cost. Simple ceramic tile also would be wise material utilization for this purpose, I think.

Note: I checked with two of other companies making Carrara marble laminates — neither Wilsonart nor Abet Laminati offer etching like this on their Carrara laminates. I did not check with Arpa; their website is difficult to navigate.

If I were using marble-patternd laminate for a counter top, I would consider doing the fancy post-formed edge that eliminates the visible Kraft paper line. Instead — and especially now that there is this etched Formica Carrara Bianco — I would probably go for it and try to mimic real marble as best I could. This preference is actually counter to the way I’d use other laminates — with other patterns or solids, I’d likely either have a flat edge with the Kraft paper line… or, I’d do a classic postformed edge — just a simple roll… or, I’d edge in steel or aluminum; that is, I would not try to disguise that I was using laminate. With the Carrara marble laminate, however, I just like the idea of faking it, which is possible with postforming technology — not to mention the pitted Formica #46 etching — today.

One final note: Carrara marble — with its closer veining — is the timeless one. The Calacatta marble you see featured in mainstream media a lot today was not commonly used back in the day, as far as I know; it’s a trendy fashionable thing circa 2013. If you want to create a Retro Renovation style kitchen or bathroom, ix-nay the Calacatta, go for the Carrara.