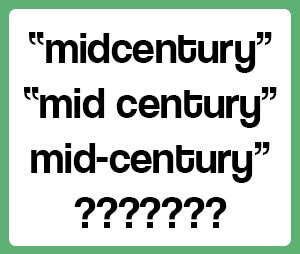 Golly, over the past six+ years, we’ve spelled it every which way. Hey: Covering all our bases and google keywords, too, I guess. However, my Meade County High School English teacher Ivy B. Hawkins — a fantastic teacher who made us diagram sentences until we could do it in our sleep — would not be amused by this lax just get it onto the www who cares about spelling anymore 21st Century (21st-Century? 21st-century?) attitude of mine.

So which is it?

Finally, what exact parts of speech do you call the word/compound, in each usage? Ack! My brain explodes! As you respond, can you also provide your citations – add hotlink in your comment. Thank you!