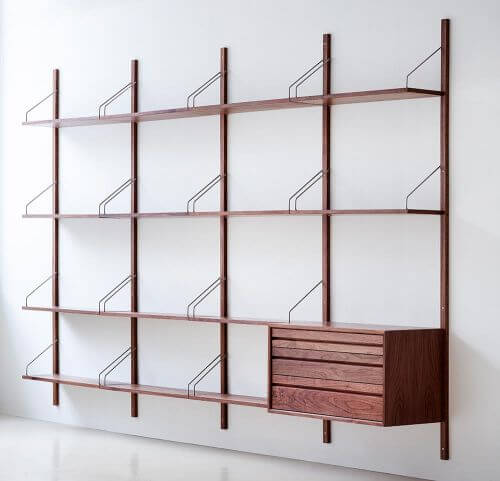 Vintage Poul Cadovius wall units can be difficult to track down and hard to install, especially when pieces have gone missing over the years. That’s why we are thrilled to hear that this popular and versatile shelving — first designed in 1948 — is in production once again. A tip from reader Jason led us to the Royal System shelving units available at Design Within Reach, made by dk3 using Cadovius’ iconic original plans. 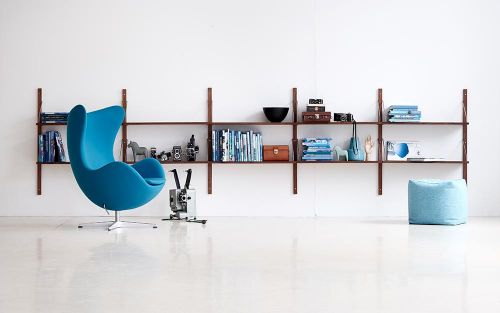 From the dk3 press release:

Company Profile :
”The true aesthetic is natural, not man made”

dk3 creates uniquely designed furniture that is shaped by nature and crafted by true enthusiasts. Always with a focus on personality, pride and sustainability. dk3 is the manifestation of the owner and founder, Jacob Plejdrups vision. A vision to unite classical carpentry traditions with modern furniture design through the fusion of timeless steel components and raw solid wooden planks. The love of the organic material and uncompromising approach to quality is present throughout the process. From the first design sketches to working in our own carpentry shop in Denmark, where the furniture is finished and surface-treated by hand. dk3 consists of two main collections: The Contemporary Solid Wood Collection and the ROYAL SYSTEM® shelving system – designed by Danish designer Poul Cadovius in 1948. 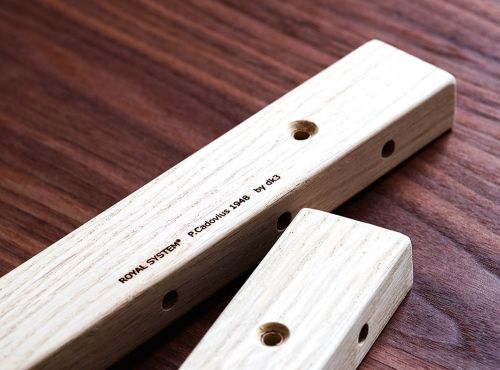 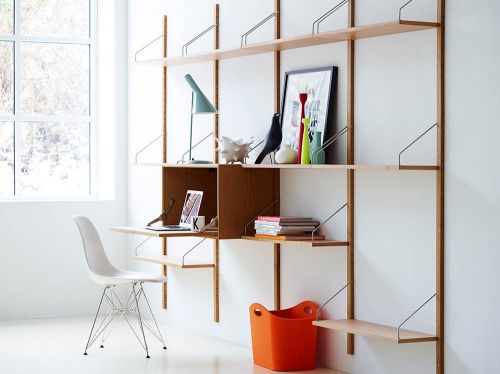 It was one of the world’s first wall-hung furniture systems, and the idea that furniture should not use floor space was innovative: “Most of us live on the bottom of a cube. If we put the walls even with the floor, we get a lot of space to live on” was the mantra of Paul Cadovius. ROYAL SYSTEM® was then ground breaking because of the wall-mounted concept, its light styling and the many individual combinations and the furniture system therefore went from success to success both in and outside Denmark. There have been made many attempts to copy this famous design, but ROYAL SYSTEM® is and remains the original. 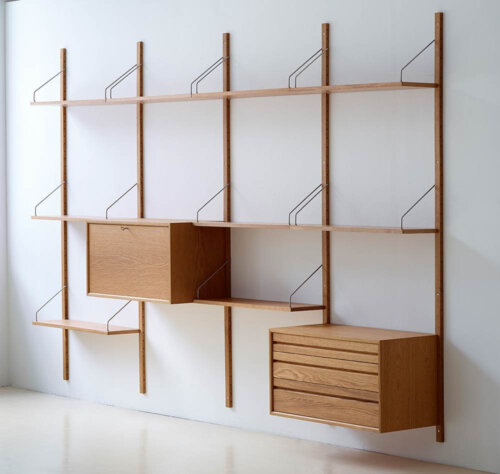 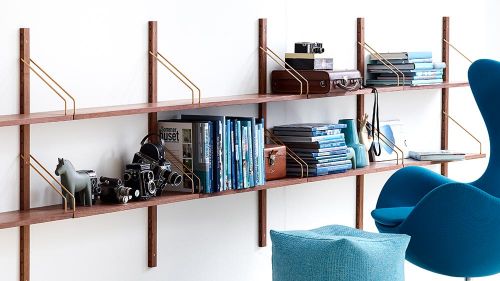 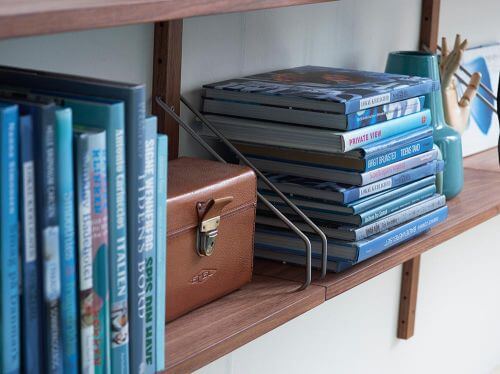 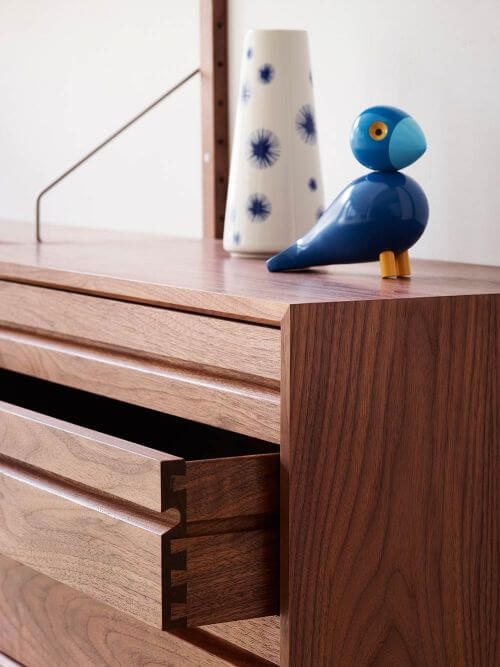 As this timeless storage system was designed in 1948 Poul Cadovius, his idea was that the Design expression should be light and reflective, and that the shelving system should be constructed to individual needs. ROYAL SYSTEM® was then produced at Paul Cadovius’ factory in Randers (Denmark), where up to 300 men were employed. ROYAL SYSTEM® was also produced under license in more than 30 countries and is considered one of Danish furniture history’s greatest successes ever. In 2010, dk3 re-launched the ROYAL SYSTEM® in contemporary materials such as walnut, oak, and compact laminate with steel or the original brass hangers. 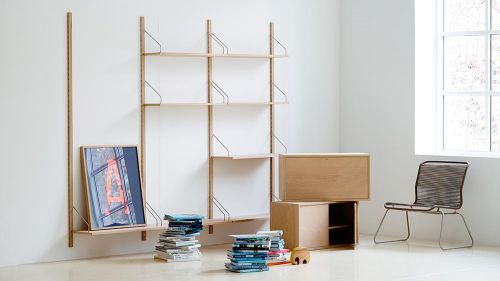 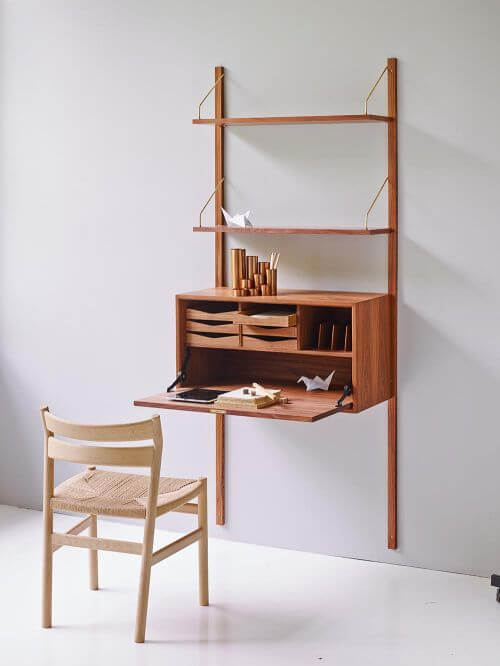 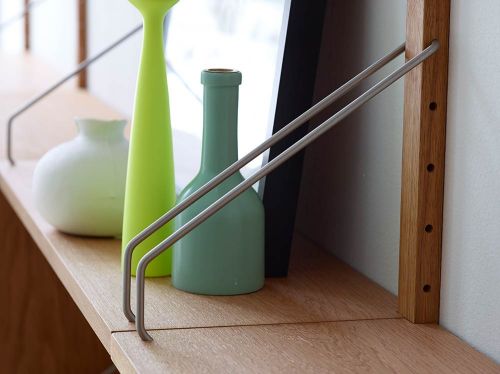 ROYAL SYSTEM® can be ordered individually as a classic bookcase, modern desk or library with different cabinet modules. The system is not only ideal for the living room or home office – large commercial interior design projects have used ROYAL SYSTEM as well. The timeless spirit of ROYAL SYSTEM® is preserved through the well known stringers, hangers, shelves and beautiful cabinets. And all of excellent quality, created for modern interior design and future needs.

The designer of the ROYAL SYSTEM®: 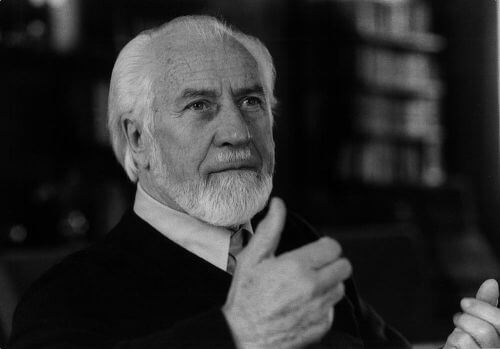 Poul Cadovius was born in Copenhagen in 1911 and was originally trained as a saddler and upholsterer. He was a colourful and successful designer with a marked influence on the Danish furniture industry and furniture design – both in his own time and later. In 1948, Cadovius designed the shelving system ROYAL SYSTEM®, which through the 50s, 60s and 70s perhaps was the largest furniture success Danish furniture industry has ever had. 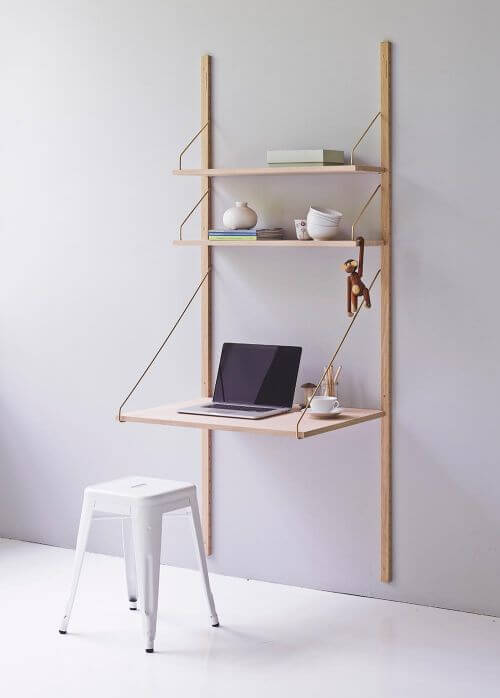 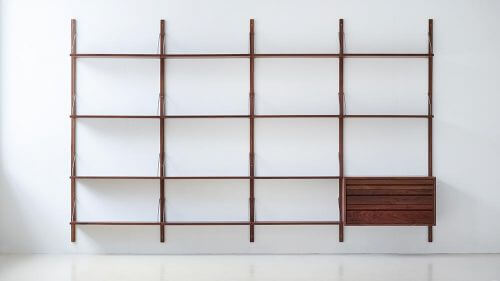 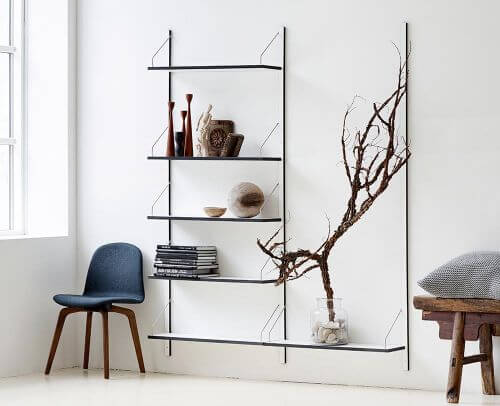 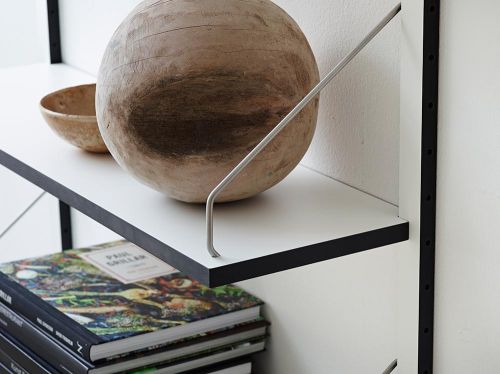 Poul Cadovius is one of the most colourful and successful personalities in Danish furniture industry’s history. “Architect, designer, self-taught inventor, manufacturer, innovator, the furniture industry’s ‘enfant terrible’ – the titles are many”, as the author Henriette Houth writes in her book ”Kassebogen”. Poul Cadovius was an ambitious and constantly seeking person. When he didn’t design or produce furniture, he was driving racing cars or building luxury yachts at his own Saghitta shipyard in Svendborg. And the stories are many: When a sailboat customer claimed bad sailing-performance on a Saghitta 35 from the yard, Poul Cadovius gave the ultimate retort. He borrowed the boat and sailed ”around Zealand” – and won.

Poul Cadovius managed to take out over 400 patents – the last as a 90-year old. Both his life and designs testify to a genuine figure that went his own way – to the delight of us all. 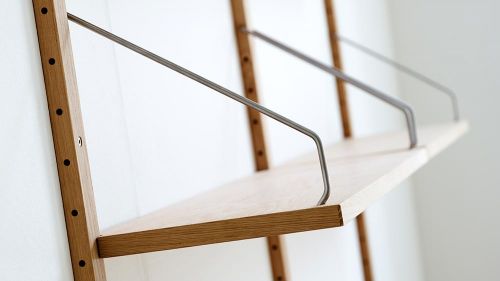 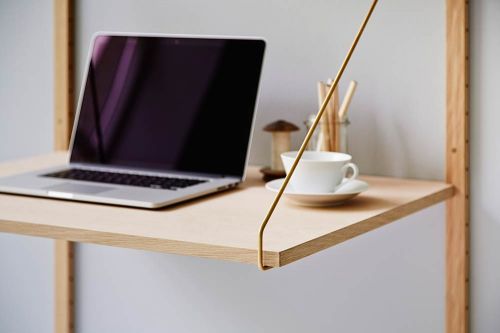 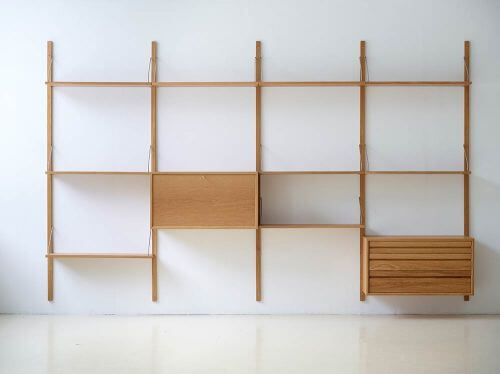 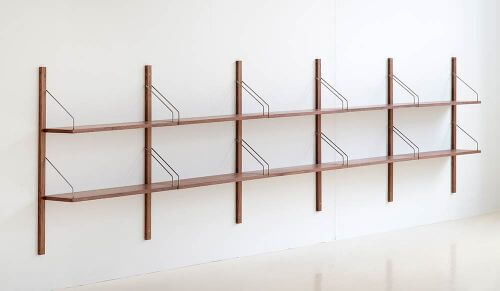 It is important to mention, that the new and the vintage parts are not compatible! Because of the modern production and machinery today, there will be small technical differentness in the dimensions. 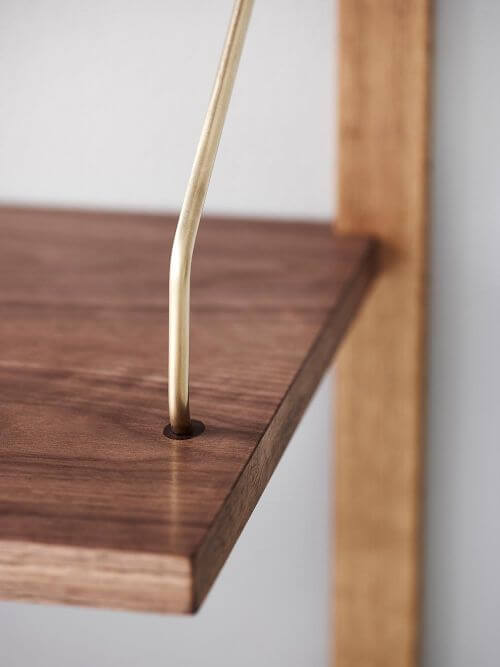 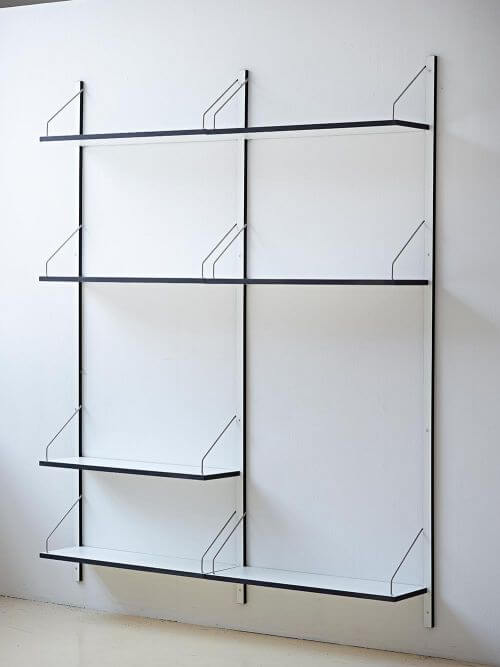 The Royal System shelving units are pricey. But, considering the difficulty in finding vintage today — plus the fact that these reproductions appear to be careful, licensed reproductions — made in Denmark — we understand.

See all of our stories about shelving here.