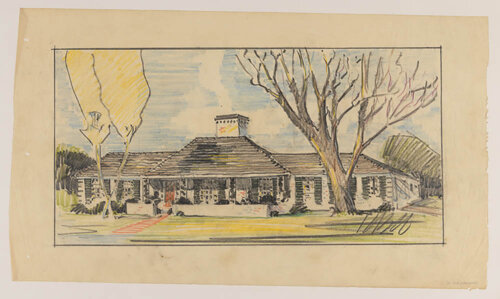 This previously unprocessed collection documents the history and work of one of the most important 20th Century architectural firms in Boston from the time of its establishment in 1925 through 2003. This project digitized key items that document the firm’s many activities, including:

Over the course of his career, Royal Barry Wills designed 2,500 residences throughout the nation, authored eight books about architecture, lectured widely, hosted a radio program, and supplied “Home Building Plans” for Sunday editions of newspapers. He was the author and subject of feature articles in Life, The Saturday Evening Post, Good Housekeeping, Better Homes and Gardens, House Beautiful, and American Home, among others. Wills received numerous awards for his work, including the gold medal in Herbert Hoover’s National Better Homes Competition in 1932, and he was one of the winners of a competition co-sponsored by Life magazine and Architectural Forum in 1938.

Life dubbed Wills “the nation’s most popular architectural author.” His ability to understand the desires of potential homebuyers and his willingness to promote himself made him a household name, with a national reputation and clientele. He did so by highlighting traditional house plans that were attractive, efficient, and affordable and by offering advice about cost-effective repairs and remodeling.

The Royal Barry Wills Associates Archive is a major addition to Historic New England’s archival collection. By expanding public access to the firm’s extensive archive, Historic New England will provide scholars focused on American domestic life, architectural and cultural historians, and other researchers with materials that they previously lacked. Access to the collection will also be of great value to:

Funding for this project was provided in part by a matching grant from the Institute of Museum and Library Services with additional support from the Felicia Fund, and Elizabeth and Robert Owens, and Kristin and Roger Servison.

About the Library and Archives

This is wonderful news, and I know I am going to be spending a lot of time studying all these amazing Royal Barry Wills materials and coming up with more stories spotlighting his life and work. Thank you, Royal Barry Wills Associates, Historic New England, and, importantly, to the grant funders! And, much appreciation to Susanna Crampton, Public Relations Officer, who has done a crackerjack job of keeping me informed of the progress of this project!