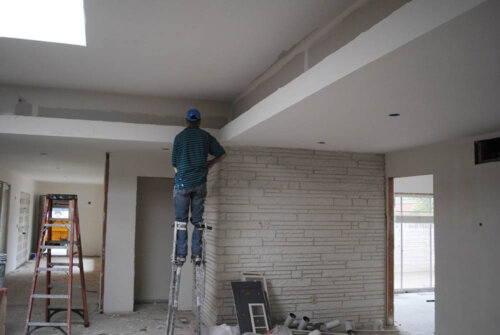 While Pam and I were off enjoying ourselves at The Hukilau, Mike and Lindsey were up to their eyeballs in work, continuing the fast-paced the restoration of their Edward Durell Stone House of Good Taste.  And, they experienced their first unexpected expense. In today’s installment — the third in the series — Mike and Lindsey share the tale. And, they ask for our ideas for a secondary flooring material to complement the original terrazzo floors in many other parts of this gorgeous 1964 house. 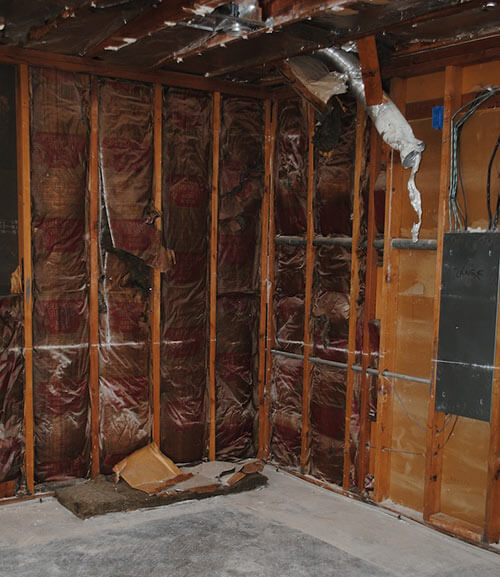 Our heads have been spinning the last few weeks with all the progress on the house and craziness in our lives. Terrazzo floors are finished (note: Mike will be giving us the full run down about the floor refinishing process in the next House of Good Taste update) and have been covered for the rest of construction, the kitchen build out is just about finished, we are starting to pack up our current home, and move in is only five weeks away. 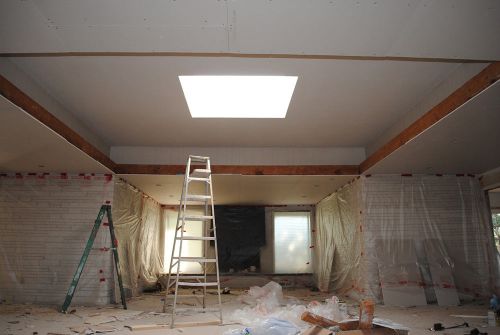 With the demo completed, our first task included electrical and wall/ceiling work. We placed the carpet back down over the terrazzo to protect it during what we knew would be messy stages of construction.  We probably won’t see them again for a while :(. With our house in shambles, we have already looked at each other a few times and said, “what have we gotten ourselves into?”  Truth be told, I think we both secretly love a little chaos in our lives.

This next phase has brought us both good and bad news. The good news is that our current home went under contract before it hit the market! Our realtor has some clients that he suspected might love our house and he was right, we got a full price offer and the best part is that they love our two vintage pink bathrooms. We’ll get to the bad news in a bit. 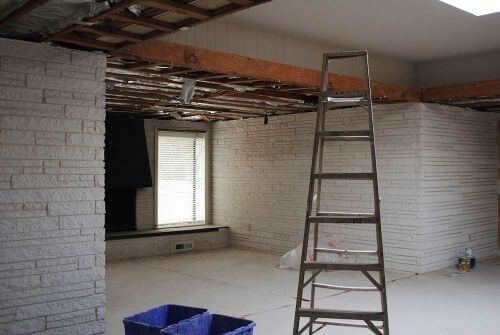 We realize electrical and drywall work don’t carry a whole lot of retro fun, but bear with us through these nuts and bolts stages, we know the fun stuff is just around the corner. 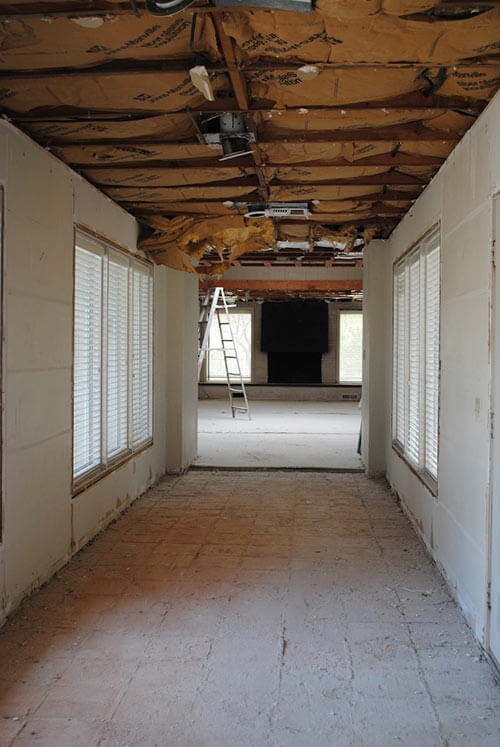 We initially though that the scope of electrical work would be fairly minor, but after being able to spend some time in the home we realized that the lighting situation was a bit of a mess and we had an opportunity to use the lighting to accent the special features of this home. This was our first taste of “might as well do it the way we want it and not regret it later” aka “we are going to blow our budget”. Because the house has a flat top roof, we really do need to do all electrical work now, as you can not just drop in new electrical in from the attic at a future date. Adding new electrical later would mean having opening up the walls and ceilings. 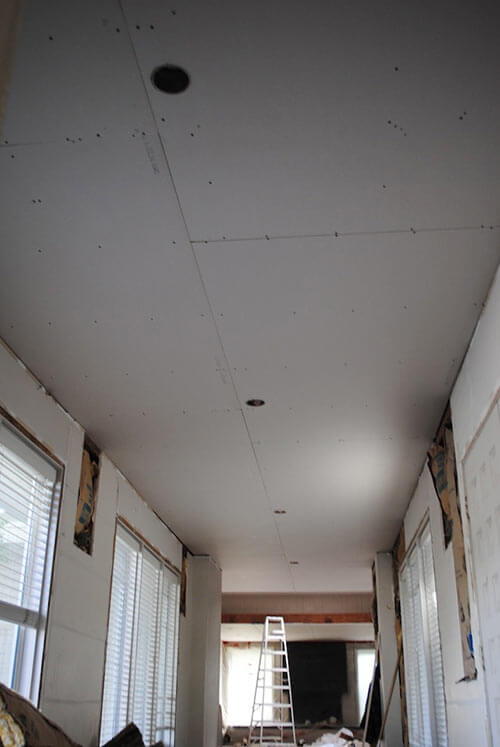 The plan consist of layered ambient and accent lighting. For ambient lighting will be installing 4″ LED recessed cans down the hallway from the front door and in the kitchen, 4 strategically placed pendant lights in the main living areas, and ceiling fans with lights in each of the bedrooms. Accent lighting will consist of wall sconces down the hallway, 12 strategically placed 4″ recessed gimbal lights that will illuminate the interior stone walls and fireplace, and redoing the lighting in the recessed ceiling that currently utilizes florescent tubes to make it softer and dim-able. We also want all of these areas to be independently controllable and dim-able, which means going from about 4 switches that controls everything to 15 switches and figuring out where to put them so they make sense, all at the same time of having to work around all the stone walls. 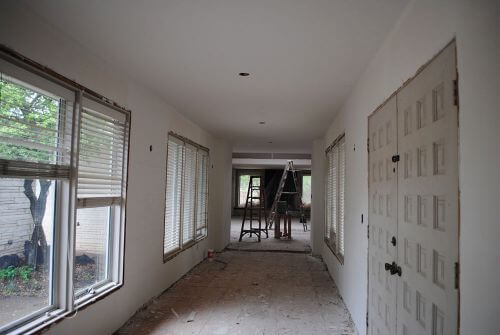 So what was the “bad news” we mentioned earlier?… we had our first OOPS :(. With not having any prior experience with a flat top roof home, we had the scraping of all the popcorn ceilings done as part of the demo. Well, after the first week of electrical work we realized that it would take about a month to finish all the wiring unless we pulled most of the ceilings and walls completely down. Without access from a attic, we had no idea what anything looked like behind the drywall and we were running into issue after issue with the framing and how the original electrical was done. So with humble sadness we were forced to pull down nearly all of the freshly scrapped ceilings and a whole lot of the walls too…. OOPS. But in the end it was probably a good thing as we found several areas of unsafe electrical and some termite damage we were able to repair, which we never would have known about if we did not pull down the ceilings. 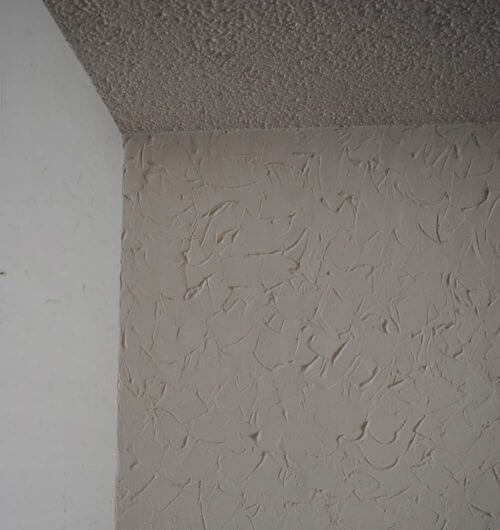 Floating out the walls and ceilings

The house has a mixture of wall textures from room to room, and one of the things we personally don’t care for is heavy wall texture.  We have seen a few homes with completely smooth walls and ceilings (not just drywall with no texture, but fully floated out), and we felt they would really look great in this space.  We agreed that having flat walls would only enhance the texture provided by the stone walls. Floating walls is a labor intensive process that will require at least three coats and sanding between each coat.  We are crossing our fingers that it turns out the way we imagine in our heads. One bright side, pulling down so much of the existing drywall for electrical, allows the floating process to go much faster with the new drywall.  Those areas will not need the existing texture knocked down and should require less coats. 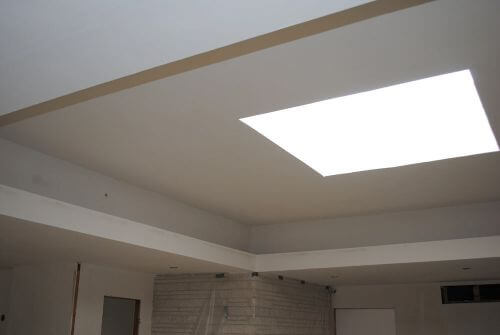 With the house tore up and feeling like it may never be put back together, we have attempted to distract ourselves with flooring decisions and researching companies who specialize in terrazzo restoration. The terrazzo covers the entire open living area but the rest of the floors are just bare slab. We thought the Retro Renovation community might have a few thoughts on what to do with the rest of the floors? We generally prefer only one or two flooring types in a home, so we are hoping to find one material that will work in the entire rest of the house rooms. We also do not want anything that will visually compete with the terrazzo. So what are your thoughts on a good secondary floor that might complement terrazzo? 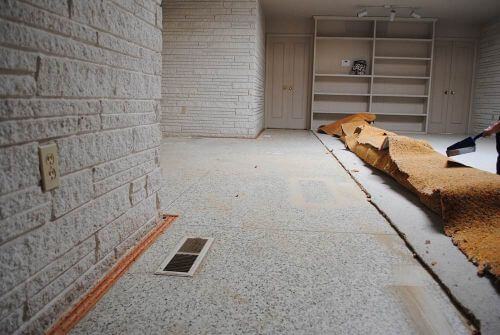 Readers — what would you suggest?

Categoriesreaders and their living rooms
Tags
house of good taste