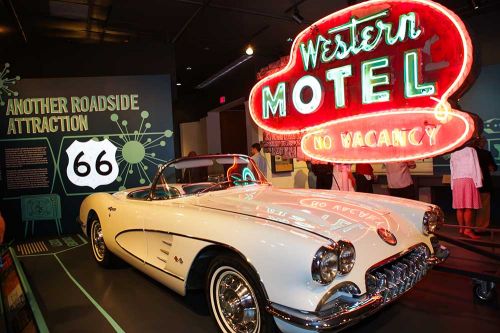 Photo courtesy of The Autry

Route 66 became a part of America’s physical landscape in 1926 — and for decades after, it came to epitomize the many twists and turns along the journey to achieve the American Dream.  Now, thanks to an exhibit — Route 66: The Road and the Romance — on view until January 4, 2015 at The Autry National Center of the American west in Los Angeles, you can take a 2,400 mile trip through Route 66’s fascinating history in one afternoon. Let’s take our own virtual tour… 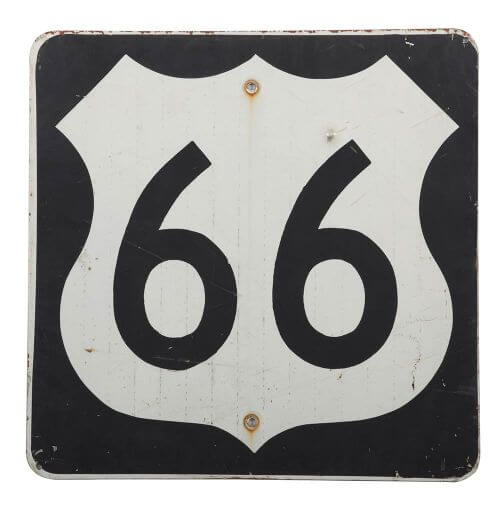 Often referred to as the “Main Street of America,” “Will Rogers Highway” and “The Mother Road” — Route 66 was a model for the modern interstate highway. But this famous road was more than just a way to connect Chicago to Los Angeles: During the Depression, it was a route from the dustbowl to the promised land of California. In the 1950s, traveling along Route 66 itself became as much of a tourist attraction for newly affluent middle class Americans as the many hotels, businesses and roadside attractions that lined it.

The news release from The Autry is really informative:

The Autry Presents Route 66: The Road and the Romance

Featuring more than 250 historical artifacts, the exhibition explores the facts and fiction surrounding the most famous road in America.

Los Angeles — U.S. Highway Route 66 is both a physical road and a romantic notion, comprising experiences and ideas that are real and imagined, historic and contemporary. Route 66: The Road and the Romance explores the significance of our nation’s most famous highway and demonstrates why it is still known as the “Main Street of America.” On view at the Autry National Center of the American West from June 8, 2014, through January 4, 2015, this is the first exhibition to consider Route 66 from a national perspective. 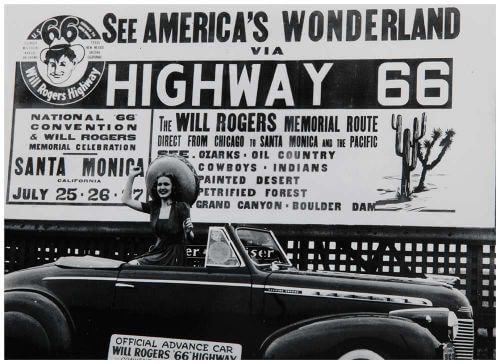 Connecting Chicago to Los Angeles, the 2,400-mile-long highway was a witness to history and a symbol for America on the move. Featuring more than 250 unique objects, Route 66: The Road and the Romance travels the iconic road from its inception in 1926 through the drama of the Great Depression to its heyday as a travel destination and eventual displacement by the Interstate Highway System. The exhibition concludes with a contemporary look at the road and the movement for its preservation.

Route 66 presents historical artifacts from institutions and private collections across the United States, many never before displayed together. Notable examples include: 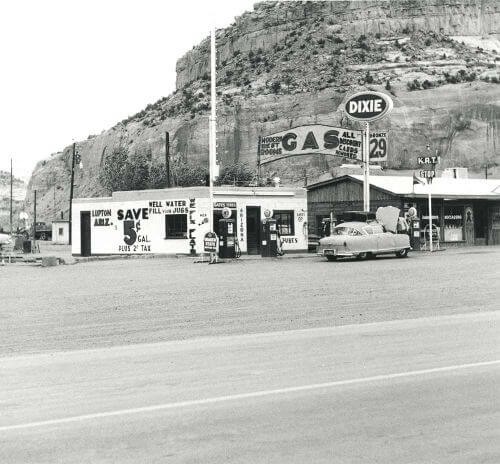 “I have fond childhood memories of summers in our 1950 Ford,” said W. Richard West, Jr., President and CEO of the Autry. “Every other year, we would take Route 66 from Oklahoma, where I grew up, to California, where my mom’s relatives lived. I loved the journey and I am delighted that the Autry is presenting this exhibition. Through a dizzying array of objects, artifacts, artwork, film, music, and more, it highlights a diversity of stories—from Chicago through Indian Country all the way to Santa Monica—and represents the opportunities and struggles that define the American West.“

The exhibition was created by Jeffrey Richardson, Gamble Curator of Western History, Popular Culture, and Firearms at the Autry, and Jim Farber, project advisor and contributing curator.

“Although it was primarily in use for only a few decades, popular culture and a sense of nostalgia firmly established Route 66 as a powerful symbol of twentieth-century America by the time it was officially decommissioned in 1985,” said Richardson. “The hope is that after seeing this exhibition, visitors will leave with the notion that there is still a lot of work to be done but that there is now a concerted effort to document and preserve what is considered one of America’s great resources.” 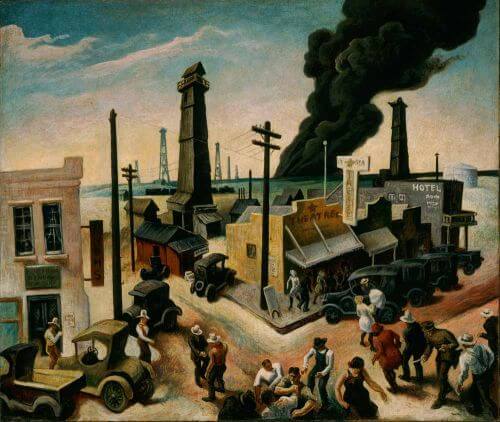 The Roots of the Route

The exhibition opens with an overview of the major industrial and technological changes that radically altered American life and paved the way for a national network of roads. Energetically supported by local boosters and bicyclists, the Good Roads Movement advocated for improved roadways, which were mostly unpaved when it began in 1880. Artifacts of this effort include an 1895 Columbia bicycle and a sign from the National Old Trails Road. Legislated in 1896, Rural Free Delivery initiated a public postal system, noted here with a mailbox from 1900. As the automobile replaced railroads as the chief mode of transportation, a new American landscape emerged, dotted with oil rigs and gas stations, motels and billboards. Thomas Hart Benton captured the era in his painting, Boomtown. The section concludes with the establishment of Route 66 in 1926 featuring many of the signs and promotional materials that helped make it the “Main Street of America.” 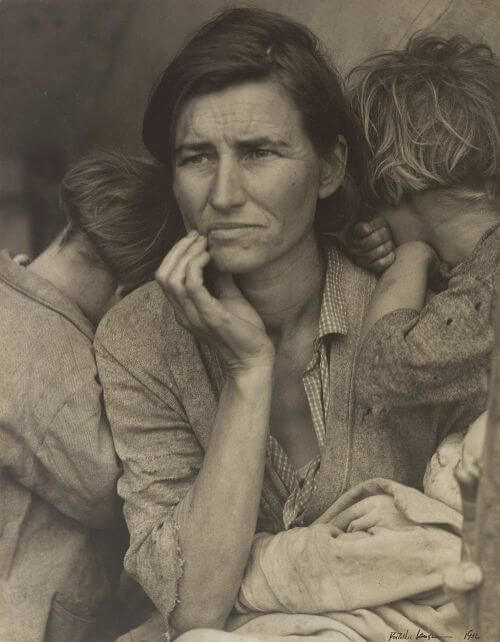 In this section, artifacts and newsreel footage relate the extraordinary hardships of the Great Depression and Dust Bowl era, when weary refugees traveled Route 66 in search of a better life. The Mother Road features a variety of paintings and photographs reflecting their plight, including iconic photographs by Dorothea Lange, Arthur Rothstein, and Horace Bristol. California was marketed as a “promised land,” even though many migrants met police “Bum Blockades” at its borders. The Grapes of Wrath by John Steinbeck was and remains an accurate portrayal of these times, and this section details the inspirations for the novel and subsequent film.

Among the countless travelers on Route 66 was charismatic musician Woody Guthrie. The highway imbued Guthrie’s public persona as he gave voice to the Depression’s downtrodden. On view are one of his Martin guitars, along with hand-drawn lyrics and sketches, and various personal effects. Visitors may also listen to selections from his acclaimed Dust Bowl Ballads.

Often overlooked, the New Deal’s impact on economic recovery along Route 66 closes out this section, with the road’s improvement and nearby new buildings, bridges, and parks creating millions of jobs. The newly paved highway was an important military transport route during World War II. 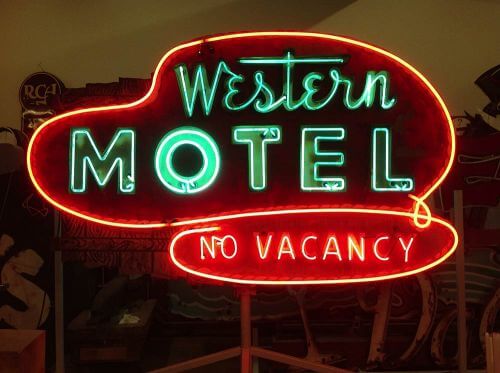 Another Roadside Attraction explores Route 66 in its golden age, as increased tourism and a growing car culture turned the highway into a major thoroughfare and vacation destination. The postwar boom and increased consumerism are illustrated through promotional materials the average traveler would have seen on the road, including a complete set of Burma Shave signs, a Phillips 66 gasoline pump, and a large contemporary neon sign. Songwriter Bobby Troup immortalized the highway in the song “(Get Your Kicks On) Route 66,” and the map he used to drive the highway is featured. The catchy song turned Route 66 into a national phenomenon and even engendered a TV series. However, objects in this section probe beyond the romance of the road. Native American stereotyping is seen in promotional souvenirs and African American segregation is exposed in signs and travel guides that identify “sundown towns”—places not to be caught in after dark. In addition, newspapers give evidence of the treacherous accidents that inspired the “Bloody 66” moniker. 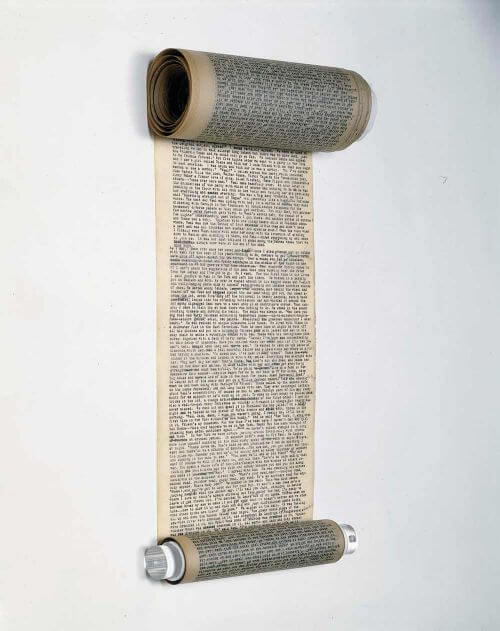 Author Jack Kerouac’s original manuscript for On the Road, 1951. (This manuscript is on loan from the collection of James S. Irsay. Photograph Courtesy of Christie’s, New York. Copyright Estate of Anthony G. Sampatacacus and the Estate of Jan Kerouac)

The emerging youth generation, including the rebellious Beats, also made use of the new highways. Jack Kerouac’s On the Road embodies their thirst for freedom. Never before seen in Los Angeles, Kerouac’s manuscript, a 120-foot-long, single-spaced typed scroll, is on display alongside a digital version that provides complete access to its contents. 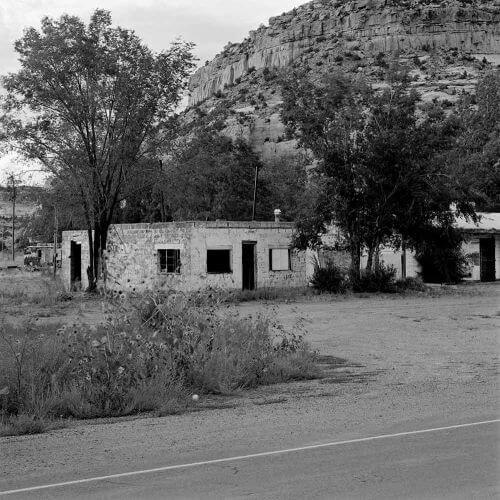 End of the Trail

In 1956, Route 66 was effectively bypassed by the Interstate Highway System. In this final section, the popularity of Route 66 is further diminished by air travel and by the allure of attractions such as Disneyland and Las Vegas. The commercial exploitation of Route 66 by multinational chain stores, restaurants, and motels also eroded the unique appeal of the road. Ironically, the first McDonald’s was opened along the route in San Bernardino in 1940. The exhibition documents the degradation of the road and its surrounding businesses with pieces of asphalt from the original roadway and several photographs from Ed Ruscha’s Twentysix Gasoline Stations (1963) set alongside Jeff Brouws’s stark 1991 “updates” of the same sites.

The decline of Route 66 is portrayed in the Pixar Animation Studios film Cars (2006), which introduced the highway to a new generation. The historic remains they encountered along the road, such as the rusting tow truck that inspired the popular character, Mater, captivated the film’s creative team. This section unveils their creative process from early research photos to sketches, models, and storyboards.

Finally, the exhibition finishes with examples of the work of the National Park Service and preservationists to restore and revive the road’s rich history and heritage, an ongoing process initiated in 1999 with the enactment of the Route 66 Corridor Preservation Program. Visitors will also be able to share their experiences and thoughts about the highway by filling out postcards and placing them on a Route 66 map. 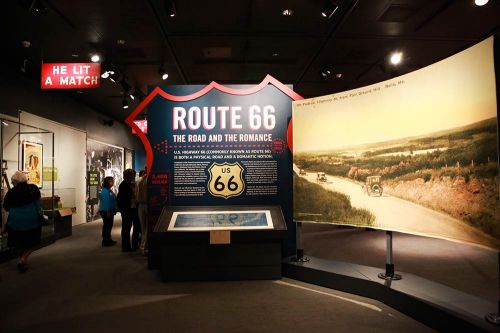 Photo courtesy of The Autry.

During the run of the exhibition, the Autry will celebrate the “Mother Road” through seminars, tours, family activities, films, and more. Highlights include Route 66 Lost and Found, an afternoon with photographer Russell Olsen presenting his multivolume book comparing contemporary photos of Route 66 with postcard images from the road’s heyday (July 20); a Neon Cruise of Downtown L.A., an open-top bus tour hosted by the Museum of Neon Art (August 21); a theatrical production Waiting for Jack with prominent L.A. poets reading the works of Beat poets in a loose reenactment of the historic 1955 Six Gallery poetry reading (September 11); and a screening of the documentary American Road, which delves into the artistic, musical, and literary resonances of the mystique of the road in American lore (November 13). On select mornings, visitors can see classic mid-century cars outside the museum and sip coffee with car enthusiasts through a series called Morning Joe and the Mother Road (exact dates TBA). Other family-friendly activities include a Route 66 Lego® Day with an afternoon screening of the Pixar animated feature Cars (September 14).

This looks like an amazing show — and there’s still time to see it before it closes on January 4, 2015. Mega thanks to The Autry National Center of the American West for allowing us to feature photos from their exhibition.

Readers, do you have memories to share of travelling along Route 66 — maybe even from the heyday years?

Tips to view slide show: Click on first image… it will enlarge and you can also read my captions… click anywhere to move forward and look for previous and next buttons within photo to move back or forth… you can start or stop at any image: