You are here: Home / Holiday / 1960 to 1969 linoleum block Christmas cards — an artist’s special gift to her daughter 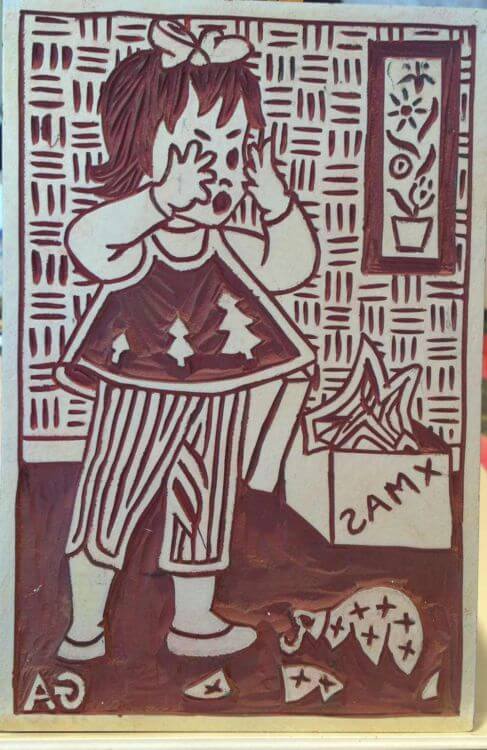 Oh my, this story is over-the-moon wonderful. June is a regular reader and contributor to the blog. Over on the Merry Kitschmas Facebook group, Pam saw her mention that her mother had made linoleum-block Christmas cards featuring June as a child during the 1960s. Would June send us photos to consider for the blog, we asked? Yes, June would. And here we have them: 10 years of linoblock plates made by June’s mother, artist Gertie Albert. This series of annual family Christmas cards captures sweetheart moments of June’s childhood — through the eyes of a mother clearly intent on savoring these precious years. 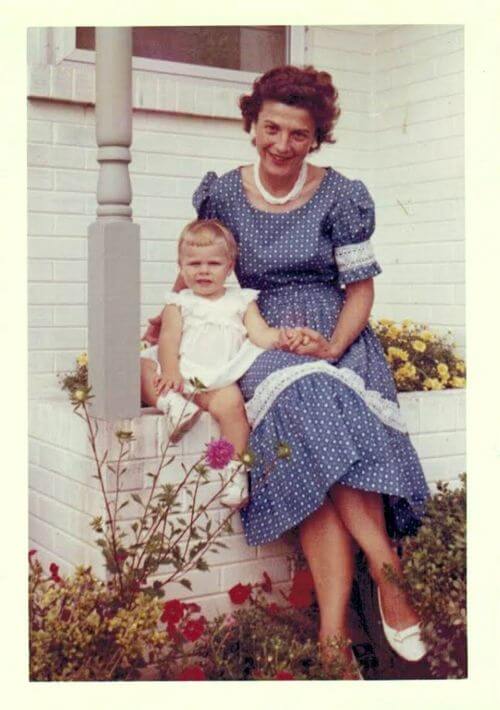 After 23 years of marriage and no children, my parents finally decided to adopt. An only child, I was born in June, ’59. Starting in 1960, my artist mom (an avid Christmas card sender) decided to get creative and make Christmas-theme linoleum block prints — using me as the ‘main character.’  Starting in the fall of 1960, she made a new linoleum block each year, for the next 10. She left me much of her artwork, and these linoleum blocks are some of my very favorite. 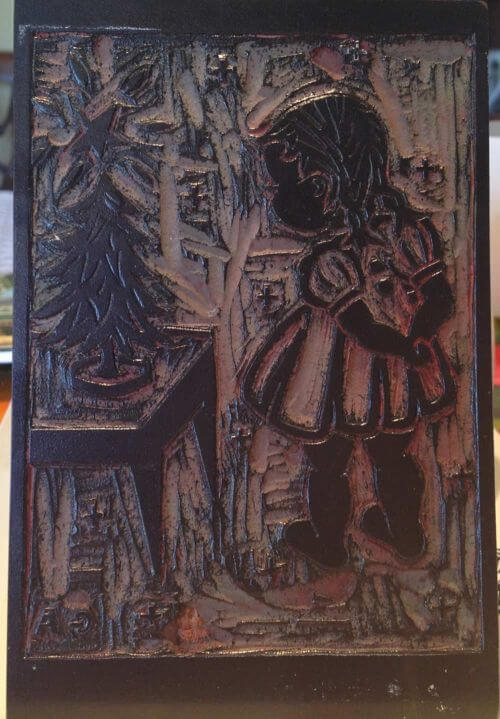 1960 – “First Xmas.” June says she had this very first block I had printed off for Christmas the year her mom (at age 93) passed away.  She waited too long to remove the ink – and now can’t remove it….

Here’s the background story of the lino blocks.  It’s long — but I wanted to give the readers a bit of idea how the artwork was thought out and where it came from.

Born in 1917, my mom Gertie Albert lived a very long, loving and prolific life as an artist, homemaker, wife and mother.  She was an outstanding student in high school earning her entrance into the NHS, and received a scholarship to college, however, it was during those years that the depression hit, and she didn’t have the money for the ‘car fare’ to take her to and from school.  She worked as a secretary – making $7/week –  (although I’m SURE she could have run any business)  and during the WWII worked for Libby McNeil Company and Pullman trains in Chicago. 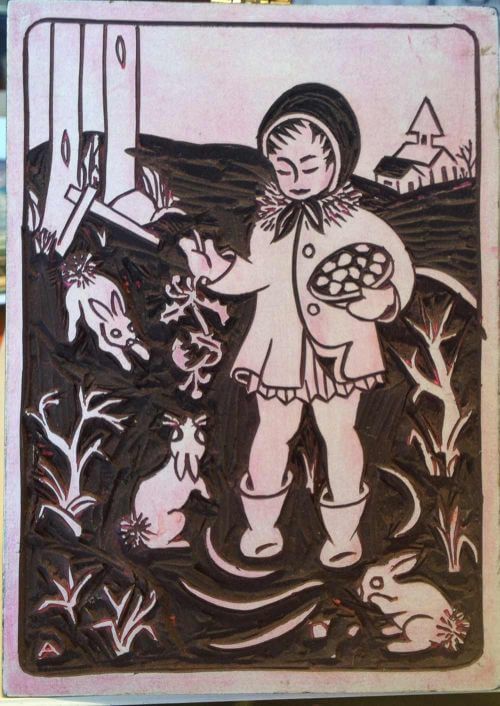 After I came along, our family moved a total of six times (my parents moved a total of 21 times!!!) The block prints represent different times and interests – the little dog featured in several of the prints was ‘my’ toy fox terrier, Spot. 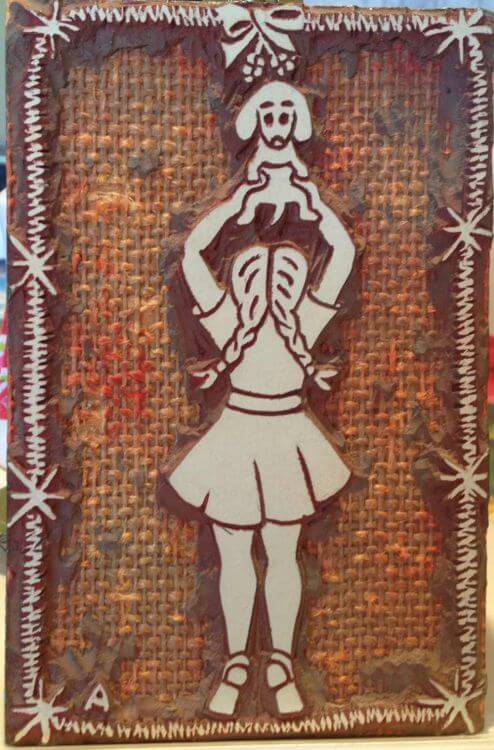 I was about three when I started to BEG my parents for a dog.  Spot was found in a litter on a farm in Indiana — one of the places my father travelled while working as a Territorial Sales Manager for International Harvester. 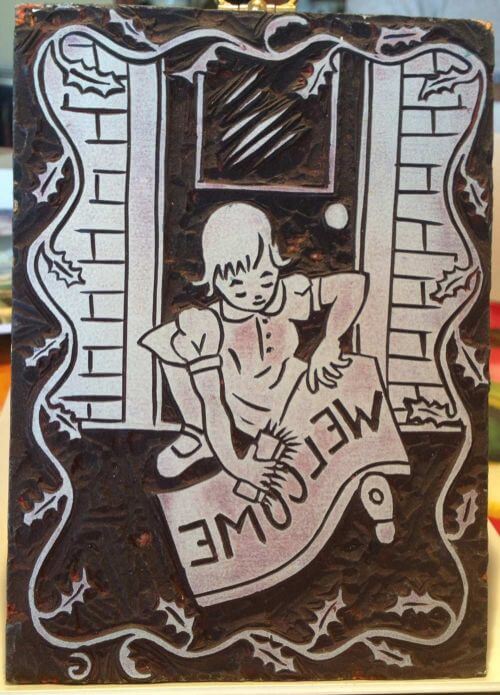 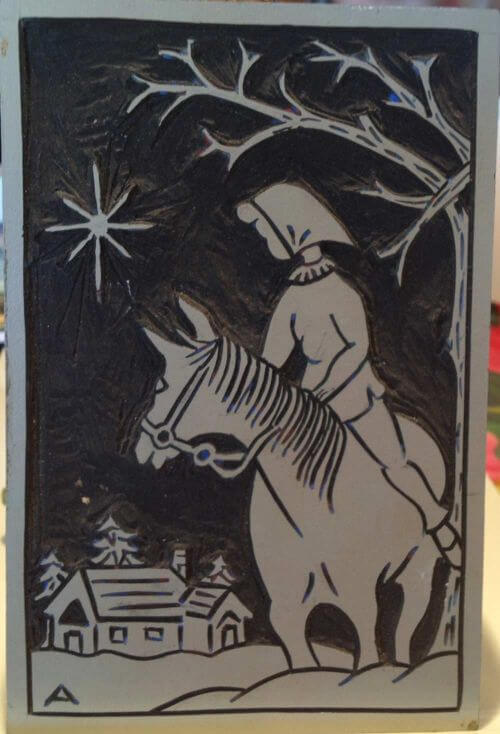 When I was six, we moved to Kansas, and I became ‘horse crazy.’  In second grade I became friends with my teacher, who just happened to have a couple of horses and a mule named “Ladybird” (after the First Lady).  On Saturdays, my Mom would drive me to meet my teacher at the stables… therefore the print with me on the horse, although “Ladybird” was actually my ‘ride.’ 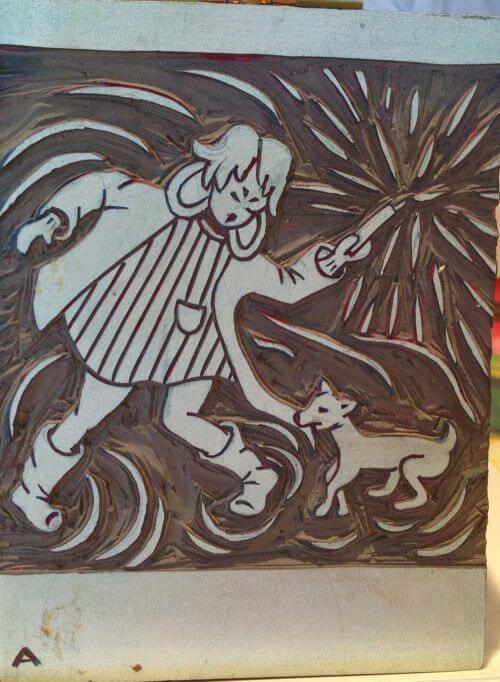 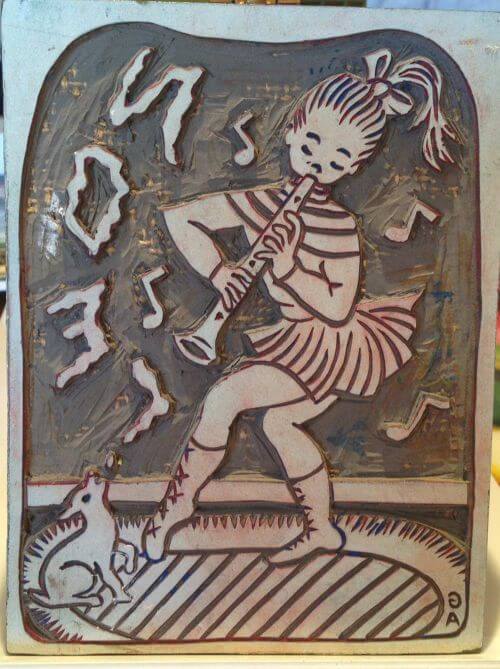 Age seven was learning the clarinet – including the ‘painful’ practicing that had accompanying ‘squeakers’.  I’m certain Spot suffered almost as much as my parents with this nightly routine. 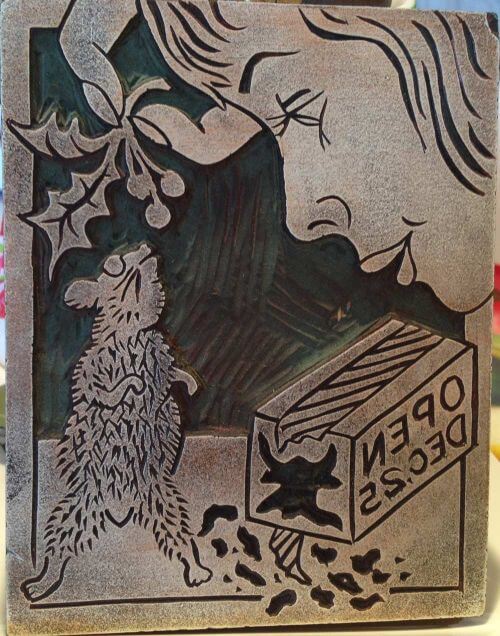 When I was eight, my parents got me a hamster, “Hambone.”  One evening Hambone escaped from his cage, managed to slip into a closet where my mom had one of her prized ‘seed’ collages.  By the time we caught up to the little devil, he’d managed to shove much of the seeds into his cheek pouches! I’m certain that event spurred that year’s lino block. 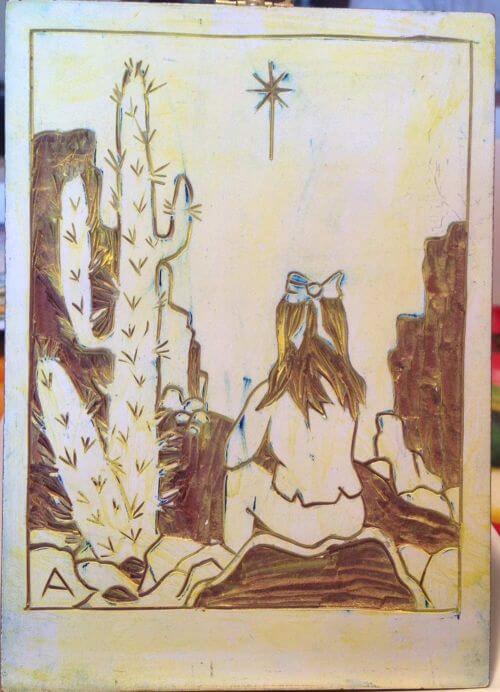 In 1969, we made a move that for my parents would last the next 30 years.  After visiting friends in Scottsdale, Arizona, for many years, one Christmas my mom proclaimed ‘never to return to the mid-west.’  My parents ended up purchasing a little 3bd/2ba Hallcraft tract home – for which I recently found the original paperwork.  $24,900.  Pretty good investment I’d say!!!  And, therefore, the last lino block design was made of me sitting in the desert.

I’ve been asked whether I took after my Mom and did any art.  Although I didn’t study art formally, growing up around an artist and around art has seemed to have rubbed off. I taught elementary school for 16 years, and ALWAYS included some type of art in my daily routine with the kids. My home is filled with all types of art — a lot of it my Mothers and other work I’ve purchased, usually at antique or second-hand stores. As with many, tastes change and the feeling of nostalgia becomes strong as the years fly by.  I’m blessed to have had the childhood, the experiences and my parents years of wisdom, patience and love. I’m truly thankful to be able to ‘hold on’ to treasures made by someone who loved me so. 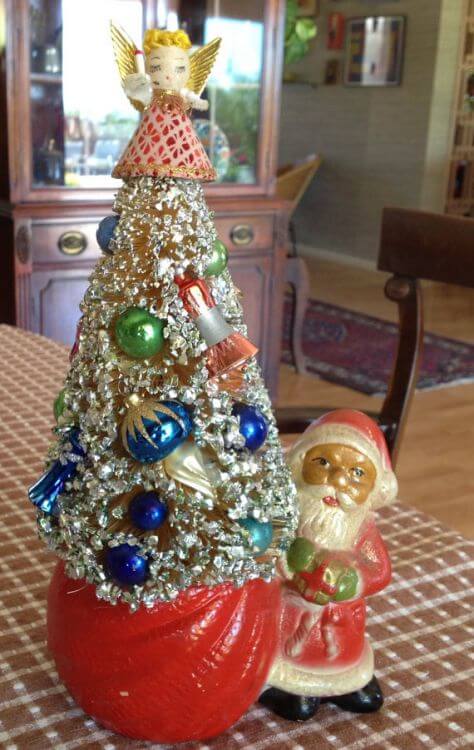 June is being humble — she is an accomplished artist, too, creating lovely vintage Christmas ornament wreaths and arrangements and selling them in her etsy shop, Retro Wreaths. Pam bought the Santa planter + bottlebrush tree that June made (shown above) as a gift for her own mother last year.

What amazing treasures your linoblock plates are, June. Thank you so much for sharing them, along with memories of your loving and talented mother. xoxo