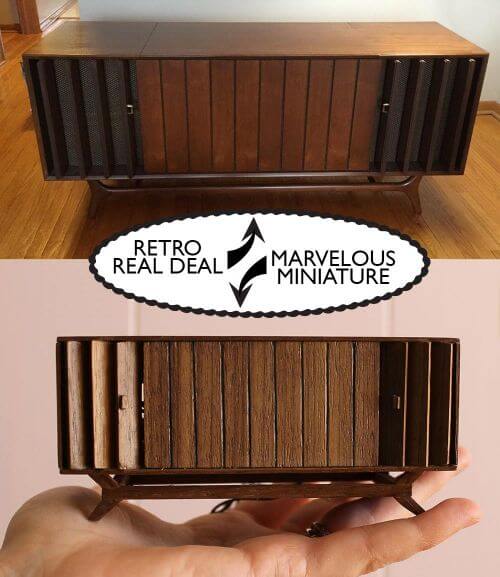 Robert Dobrin, self-titled Chief Ding Dong at ElectraChime, has outdone us all this time — he has built a mini chime doorbell for my in-progress DIY 1955 Betsy McCall dollhouse. But where to hide the miniature ding-dong electronics? Robert also built a miniature stereo console — the cutest one you’ve ever seen!

We know Robert as the meticulous creator of long chime doorbell reproductions and original designs. As it turns out, he also has a fondness for miniatures. He’s made mini chime doorbells before, but he had never attempted to make dollhouse furniture. Holey moley — this sounded like it was going to be so cool!

A working doorbell system for the Betsy McCall dollhouse

Robert chronicled the project at every step. He writes:

Kate’s DIY Betsy McCall dollhouse project stirred my life-long love for miniatures. Since doorbells are pretty much my life, I anxiously volunteered to supply a miniature long bell door chime. A quick email exchange with the Dollhouse Owner/Builder (aka Kate) provided the green light so long as I didn’t spend too much on the project.

Trusting my own instinct I modeled the door chime itself after a popular 1950s model from Rittenhouse known as the Lyric. The Lyric, was originally designed by famed industrial designer Norman Bel Geddes. 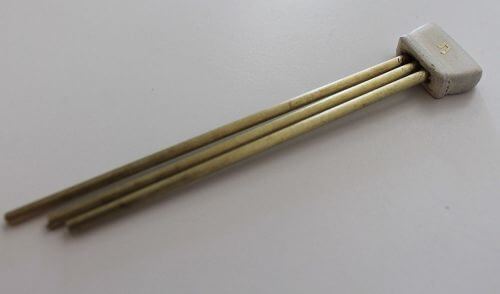 The musical note badge came out of a scrap-booker’s bottle of glitter. 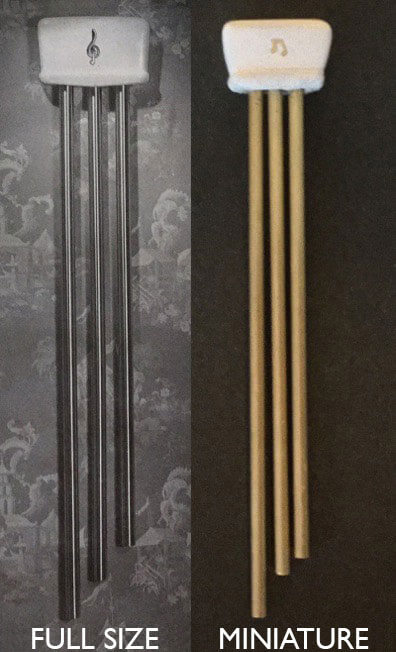 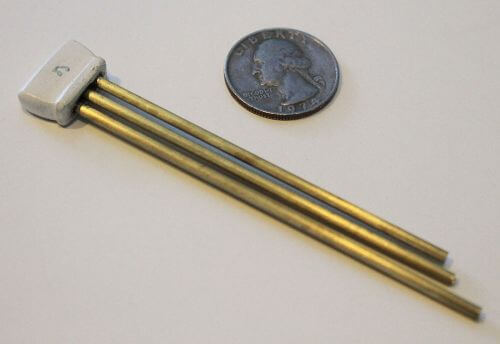 The dollhouse door chime in one inch scale is a a little over three and one half inches tall compared to almost four feet for the real thing. 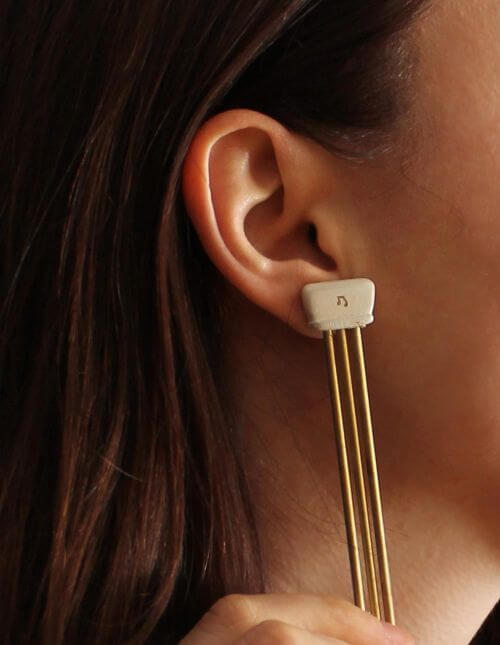 While the scale chime provides the necessary sculptural element for the wall, it’s entirely lacking in the ding-dong department. So even if we could miniaturize the mechanism to strike the bells, the three inch bells would produce a note so high it wouldn’t even summon tinkerbell, much less the real and make believe people who will actually inhabit the dollhouse.

So what’s a doorbell guy to do? The dollhouse’s button could be hooked up to a real doorbell, but that would only confound the family dog who wouldn’t know whether to bark at door or the dollhouse. The answer is: a recorded doorbell. By way of disclosure, I generally find the use of electronics for doorbells an abomination. As far as I am concerned, proper doorbells derive their call from striking real metal bells. However since the ding-dong was sampled from an actual ElectraChime long chime doorbell, I will let practicality rule the day.

I was going to upcycle a recordable greeting card I had lying around, but it sounded truly terrible and lacked a proper button.  Instead, I found this ten second recordable sound module on ebay for just under $2.00 which included batteries and shipping: 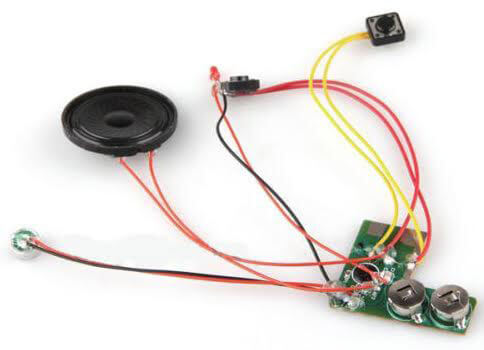 #2 — A reproduction Packard stereo console to hide the sound module

While waiting for the sound module, I wrapped my head around housing the electronics. The original strategy was to put the electronics under the house. Then inspiration hit me upside the head — why not hide the module in plain view inside a handsome mid-century Hi Fi console?! Another brief exchange with Kate, who was now acting as the Decorator-in-Chief, assured me a Hi Fi would have a place in her dollhouse extraordinaire. 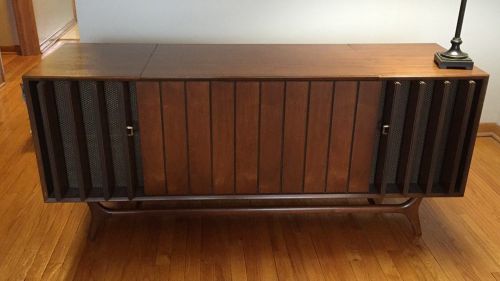 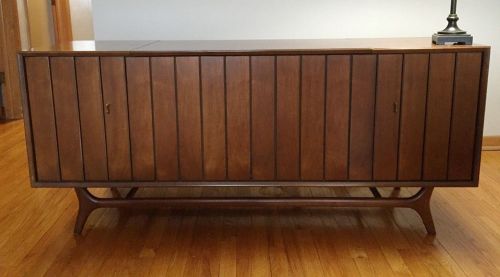 We settled on one modeled after the Hi Fi I grew up with. 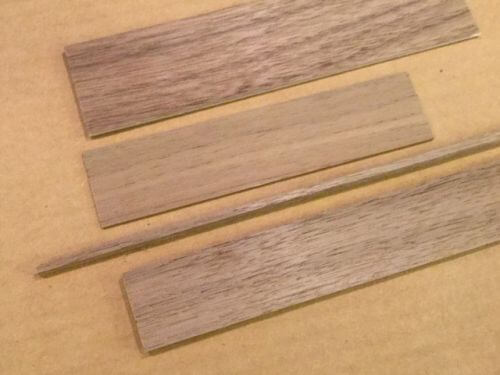 The first step was to mill some furniture grade dollhouse lumber. I used my table saw to rip a scrap piece of straight grained North American Black Walnut into some thin 1/8 inch thick boards for the cabinet, some 7/64 x 1/8 pieces for the legs and some 3/32 inch thick boards for the louvers.  If you don’t have access to a table saw, you can find what you need by searching “scroll saw lumber” on eBay. 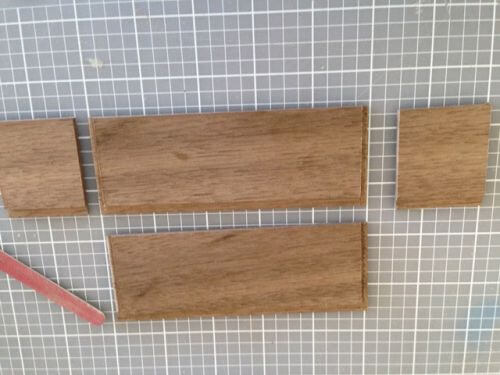 The next step was to cut some tiny rabbets to join the sides of the cabinet and a wider rabbet for the reveal on the front of the Hi Fi. The reveal was critical to keep the look of the cabinet in scale, and to provide a gluing surface for the louvers. 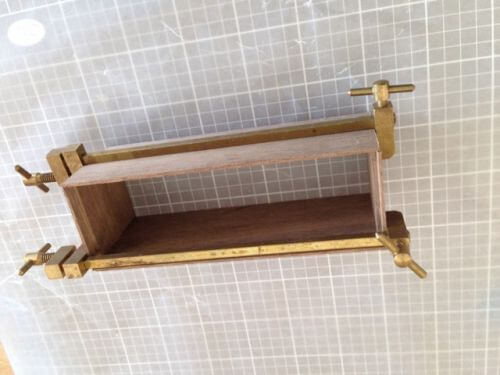 These tiny bar clamps came in handy. I knew there was a reason I picked them up at some garage sale years ago. 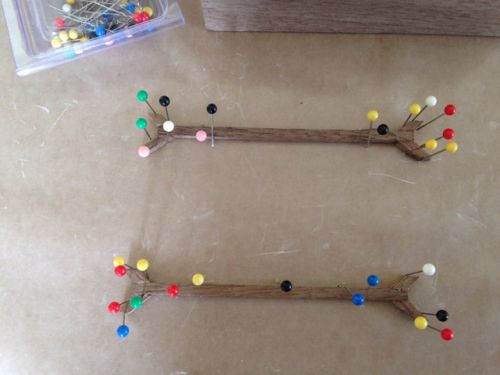 For the legs and undercarriage, I used an old modelers technique that uses pins as clamps through wax paper on top of cardboard. 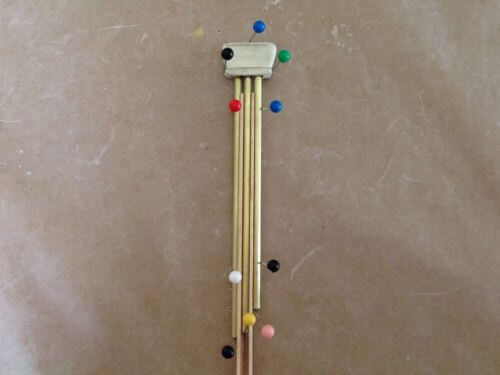 I used a similar tack-tic (pun and misspelling intended) to glue the thin brass tubing to the carved head of the door chime. Those are coffee stir stick spacers. 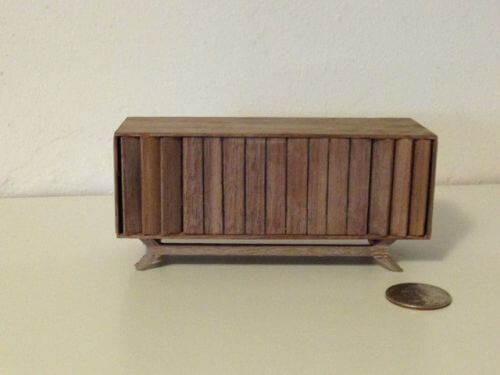 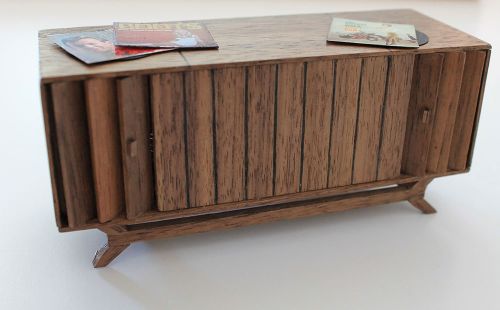 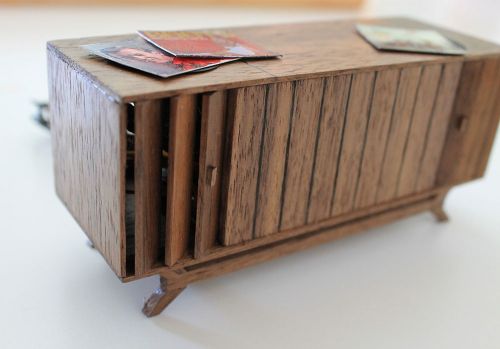 I’m not going to lie to you, attaching the side louvers to the cabinet was tedious. The fixed center slats are two joined pieces of the same walnut as the cabinet sides. I etched vertical grooves and blackened the lines with a pen. Here’s the cabinet ready for finishing. 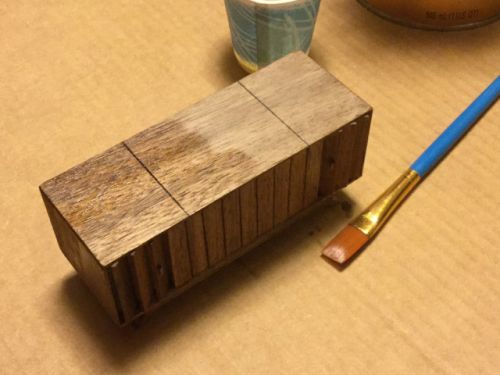 Now for one of the more rewarding tasks: finishing. Here the HiFi console gets the first of three coats of satin urethane varnish. 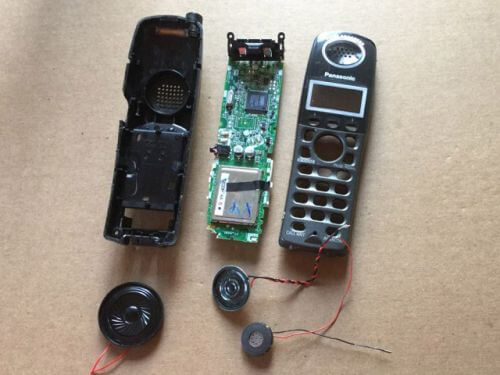 #3 — Finish the sound module for the ding dong recording 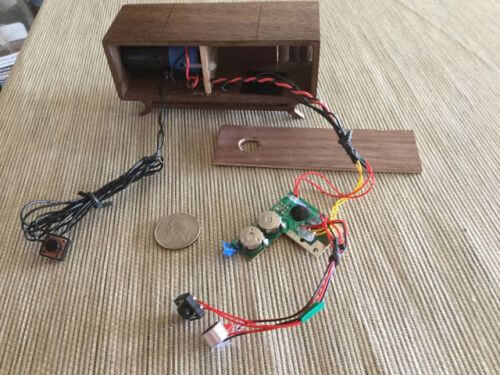 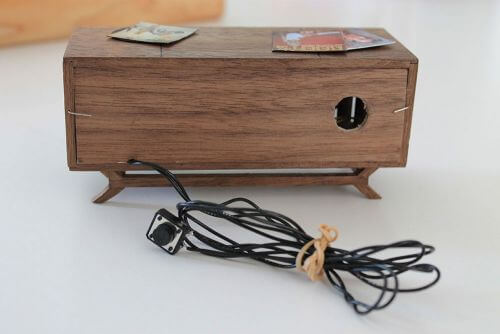 I soldered the new speaker leads to the module and added longer leads for the push button that will become the doorbell button. Speaking of speakers, I found that putting the speaker behind a one inch tube really amplified the sound. You can see the tube inside the cabinet on the left. The sound module is held in place with a bit of hook and loop fastener that allows for battery replacement.

#4 — Finishing touches aka These (teeny tiny) Boots are Made for Walking! 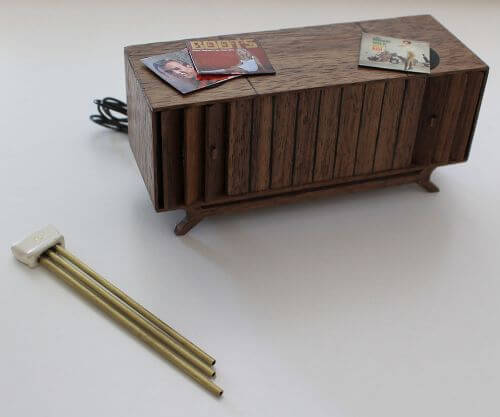 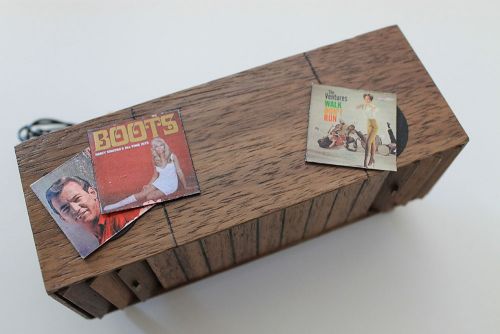 And here you have it. For grins, giggles and easier identification of this unit as a Hi Fi, I put a few swell records on top of the cabinet. Next time we’ll make an actual hood that opens to reveal the turntable.

I am in awe — those itty bitty records were a perfect final touch — you did a fantastic job, Robert!

Robert even sent along the leftover walnut wood scraps from building the Hi-Fi for me to use to make some of the other dollhouse furniture needed. Double thanks!

Where should I put the Hi-Fi?

Now I have to decide which of the two locations will be the future home of this amazing Hi-Fi doorbell cabinet: 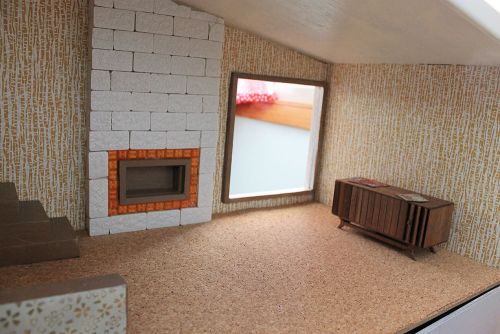 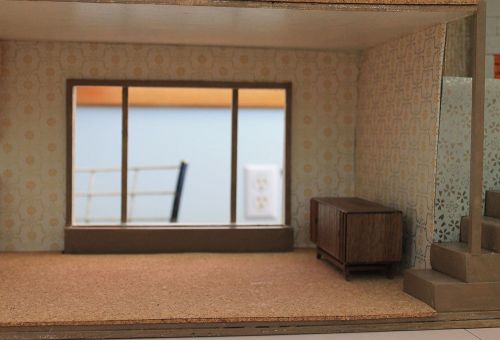 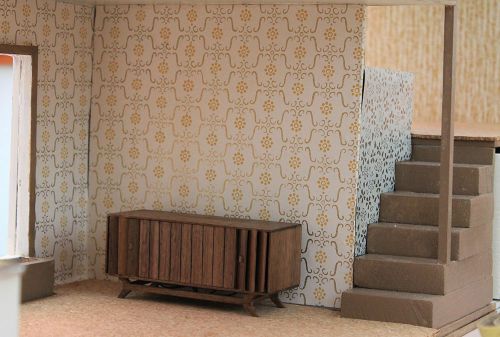 b) the far right wall in the dining room (shown above).

Where should the hi fi go, readers?

Golly, anyone with a dollhouse is certainly going to want one of these. I asked Robert if he thought he might eventually offer these for sale on his website — since he did such a fantastic job and really seemed to enjoy the project. He replied:

I’m not sure I have the inclination to get into the dollhouse furniture business, although I’d certainly change my mind in the face of overwhelming demand. I could make a more detailed sketch for download if anybody wanted to duplicate the project. 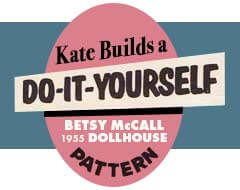 Mega, mega thanks goes out to Robert for building such an amazing miniature doorbell system for the 1955 Betsy McCall Dollhouse project!

You can follow all the stories about
building and decorating my
1955 Betsy McCall dollhouse by clicking here.