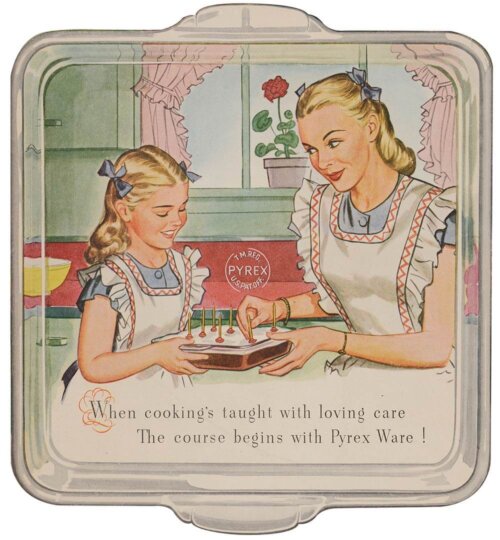 Happy 100th birthday, Pyrex! This clear glass cookware — classic Americana — has a very colorful history. Its genesis came in 1913 from Bessie Littleton, whose husband Jesse worked at Corning Glass Works. Bessie was frustrated when her stoneware casserole broke apart in the oven, so she asked her husband if the Glass Works had a suitable substitute. 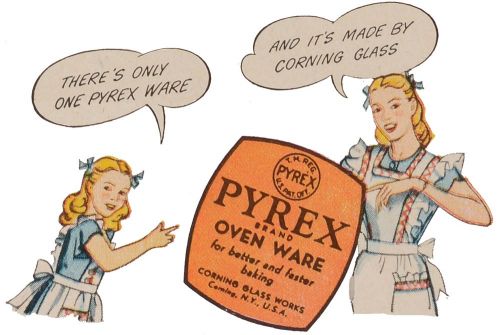 Up until then, it seems, there was no such thing as glass bakeware. The next day, Bessie’s husband brought home the sawed-off bottom of a battery jar used by railroads that was made of a special shatter-resistant glass. Bessie put it to the test and liked the results… the company decided to use this opportunity to make a move into the consumer market… and in 1915 the Pyrex we know of today was born. Let’s take a look at this classic Americana company’s history … and at the products they have introduced to mark their centennial. 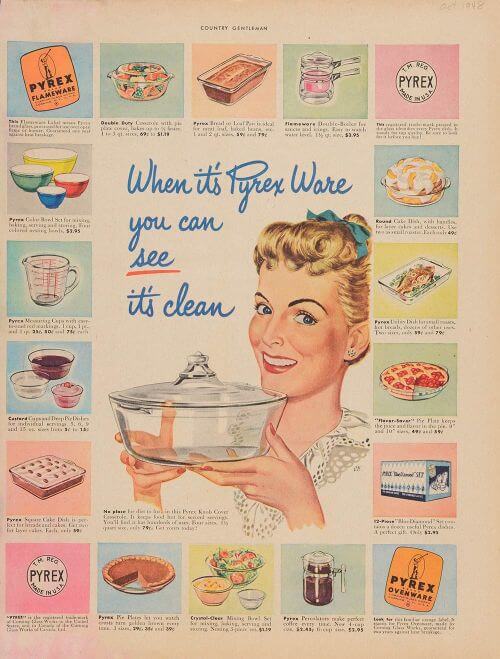 On its website, Pyrex explains more about the special glass:

The heat-tempered glass that is the foundation of the Pyrex brand was created years earlier by Corning Glass scientists charged with developing lantern glass for railroads. They needed to tackle a particular problem—the heat of the lantern flame conspired with the cold air of winter to shatter traditional glass. They needed a glass that could handle changes in temperature. By 1913, the glass was used in a number of industrial applications. 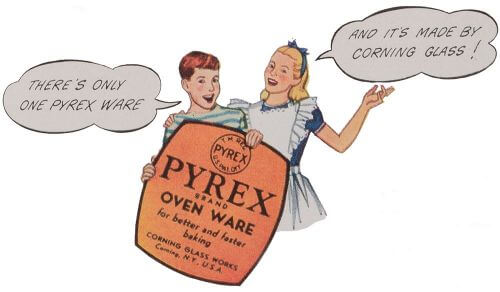 The Pyrex Wikipedia page also discusses borosilicate glass and notes that it continues to be used today in laboratory glassware because of its clarity and low thermal expansion.

However, today, Pyrex is made using tempered soda-lime glass. Here at Retro Renovation, we tend to be suspicious purists and might lean toward “buy vintage” — golly, I see it at every estate sale I go to, that’s for sure. That said, I don’t really know if there is any functional difference or other reason to buy new vs. vintage.

UPDATE: Jennifer pointed us to this 2011 report by Consumer Reports in which Consumer Reports researched reports by users of the new formula that the glassware shattered. Take a look, check with your own experts, do your own research, make your own decisions, be sure to follow directions/labels/etc.

How did Pyrex get its name?

The Wikipedia page also lists this interesting blurb from a Corning executive on the etymology of the name “Pyrex”:

The word PYREX is probably a purely arbitrary word which was devised in 1915 as a trade-mark for products manufactured and sold by Corning Glass Works. While some people have thought that it was made up from the Greek pyr and the Latin rex we have always taken the position that no graduate of Harvard would be guilty of such a classical hybrid. Actually, we had a number of prior trade-marks ending in the letters ex. One of the first commercial products to be sold under the new mark was a pie plate and in the interests of euphonism the letter r was inserted between pie and ex and the whole thing condensed to PYREX. 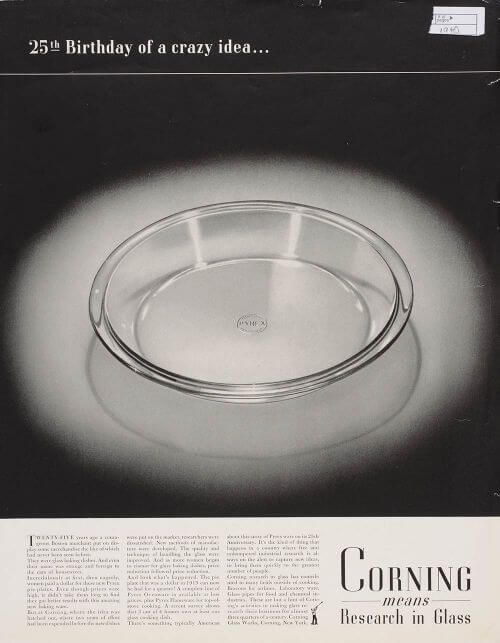 Of course, we also love doing these anniversary stories because it enables us to get our hands on adorable vintage advertising. Like many other consumer products firms during the early- through mid-20th Century, Pyrex depended on idyllic American Dream style illustrations to market its products. Many of them played on the “it’s clear as glass” theme — to great effect. 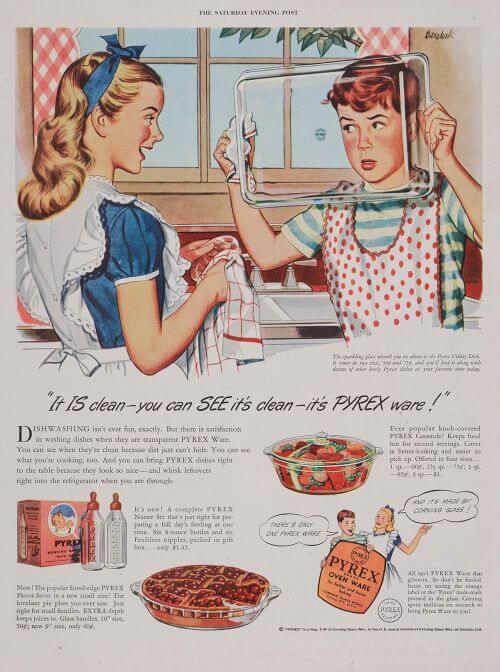 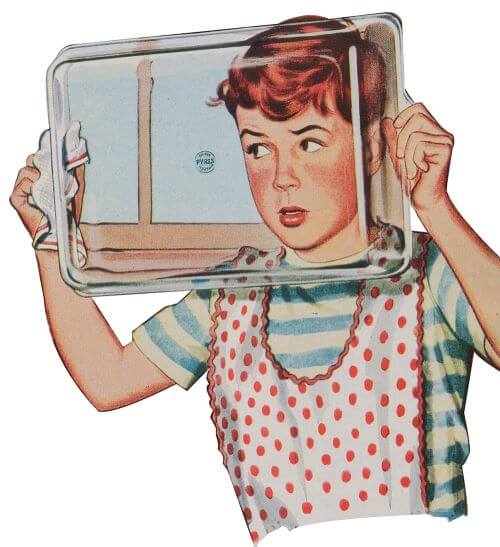 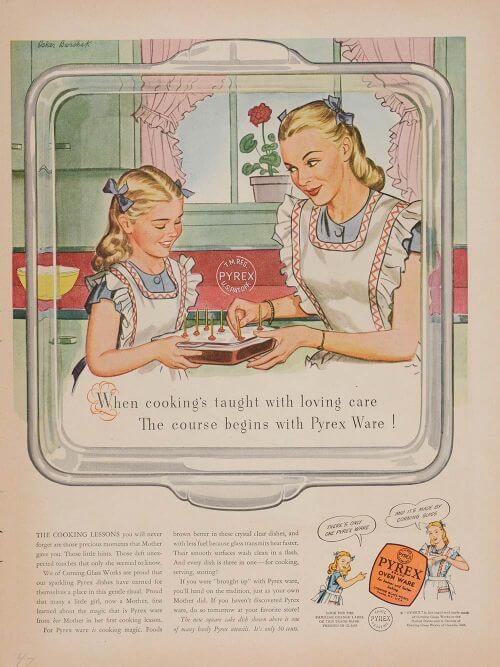 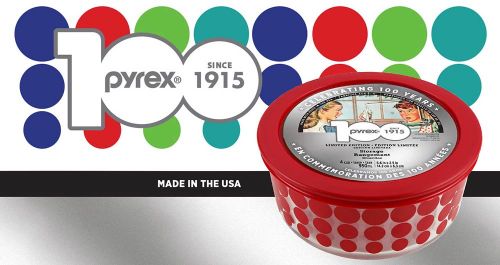 To celebrate Pyrex’s big birthday, the company has issued a special Pyrex 100 line — including a 100th anniversary engraved pie plate, five new measuring cups, five ‘Dots’ storage pieces in vibrant colors, as well as two new portable bags for the Pyrex 3-quart oblong baking dish. The Pyrex 100 anniversary line will be available to purchase until the end of 2015. 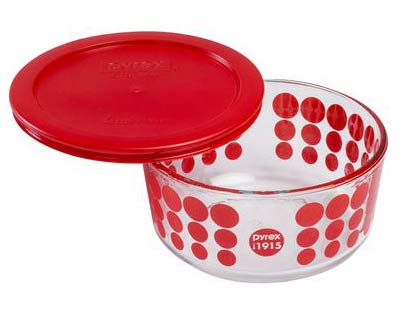 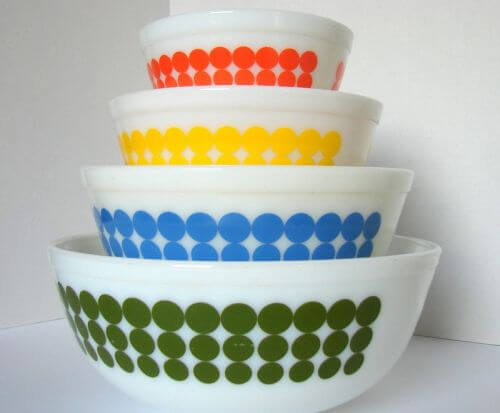 I found a little more information and a vintage catalog image showing the “New Dot” Pyrex pattern over on Corelle Corner. It seems the “New Dot” bowls were available in four sizes, and sold as open stock — not in a set of four. After doing a quick search of ebay and etsy, it seems like full sets including all four color/sizes are hard to come by.

Dots are hots! Psshaww to chevrons: We LOVE dots — and especially polka dots! 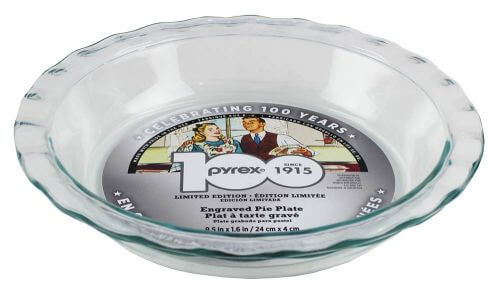 Pyrex 100 Easy Grab pie plate: This limited pie plate carries the official 100th anniversary insignia. Etched into the bottom of the pie plate are the words “Made in Charleroi, PA USA” to honor the generations of hardworking families in Pyrex’s hometown. MSRP: $5.99 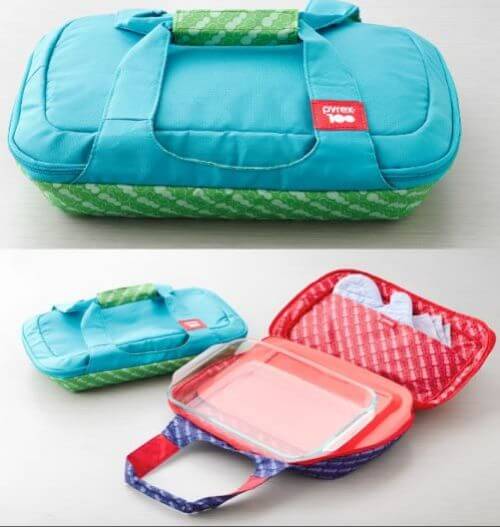 Thanks to Michael Scheffki, Brand Lead for Pyrex, for supplying information for this story, along with the new product photography and vintage Pyrex advertisements.

Who has Pyrex memories?
Do we have Pyrex collectors among us?