When reader Susan discovered our series — Kate builds a 1955 Betsy McCall DIY Dollhouse — a rush of happy memories started flooding back. Susan still has her own Betsy McCall Dollhouse, which she received for her fifth birthday in 1958. Since then, the dollhouse has been remodeled twice — once for her daughter in 1983 and again more recently as a Christmas surprise for her two granddaughters in the early 2000s. Yes — this dollhouse has become a family heirloom — delighting three generations — so far! 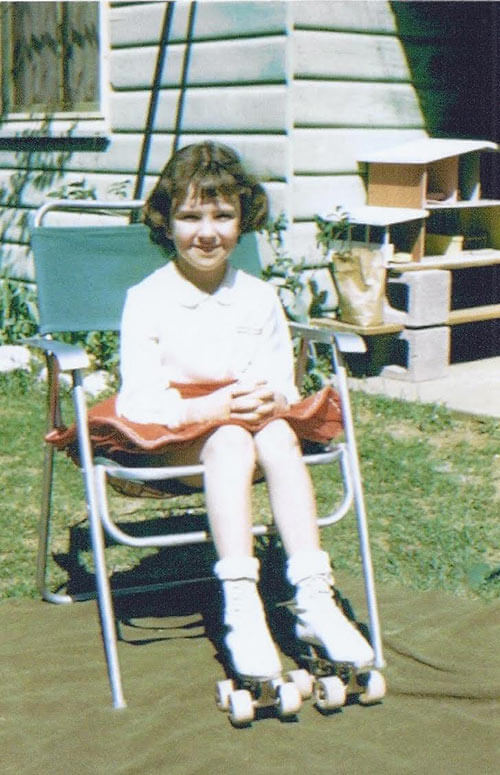 In 1957, my family lived in Chico, California. I’m the youngest of six kids. My mother, Priscilla, had already ordered the dollhouse plans from McCall’s. She showed them to a friend who was a contractor. I don’t remember his name, but I was told he ended up making two doll houses: one for me and one for his own daughter. My father, Wilfred, made all the wood furniture for it; most of which still exists today. My mother did all the decorating. Sadly, this is the only photo I have of the dollhouse from my childhood. The front of the dollhouse was stained to look like redwood. I so wish I had a photo of it.

I do remember being very protective of the dollhouse. When friends wanted to play with it, I was constantly putting things “back where they belong.” I wish my current home was that neat and tidy. My daughter was exactly the same way. My granddaughters, sisters Natalie and Madison, didn’t fuss as much. I think they had more fun playing with it than I did. 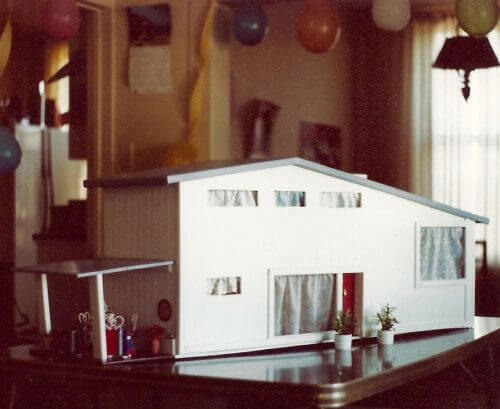 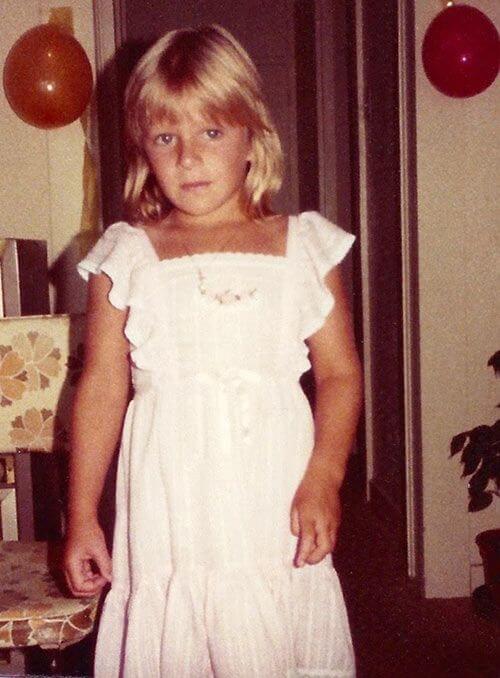 Here is my daughter Tiffany at her seventh birthday party in 1983. I don’t know why we didn’t take a picture of her IN FRONT of the dollhouse. 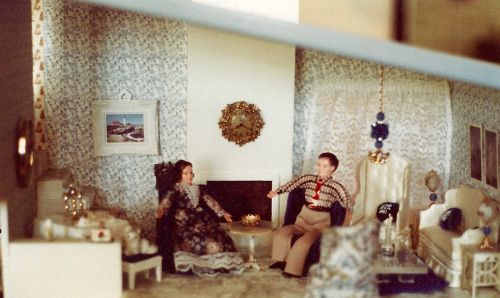 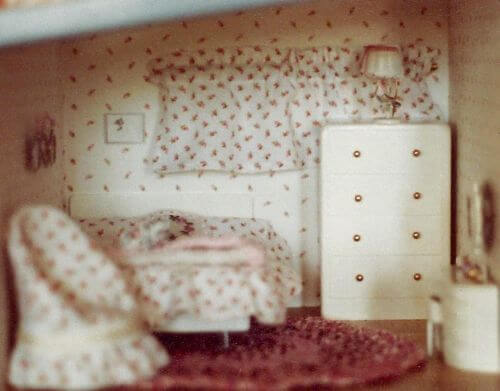 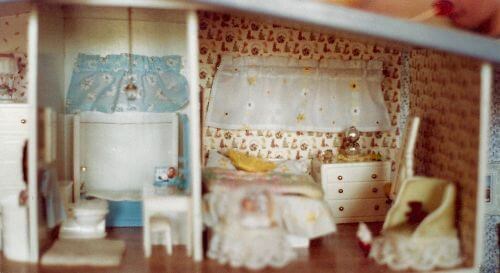 I knew my mother was redoing the dollhouse for Tiffany, but I didn’t know about the decor until Tiffany’s birthday, so the interior was a surprise for me. For this 1983 renovation, she chose the colors — blue & white living room, pink bedrooms, blue bathroom — and a Victorian theme because that’s what I liked in my teens. 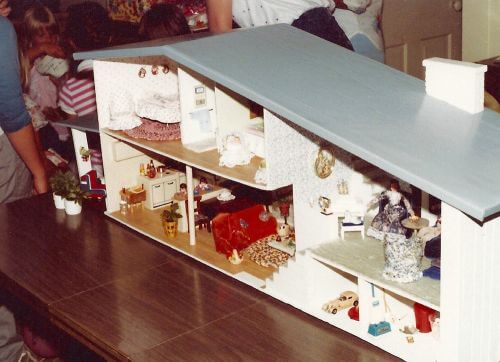 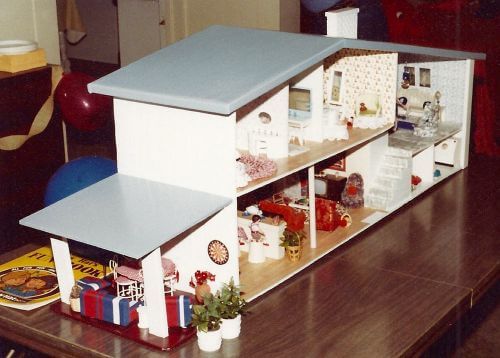 The drawer had been seriously damaged during a move. My mother no longer had the plans to facilitate a replacement drawer. My oldest brother, Peter, turned the drawer space into a divided laundry room/storage room. 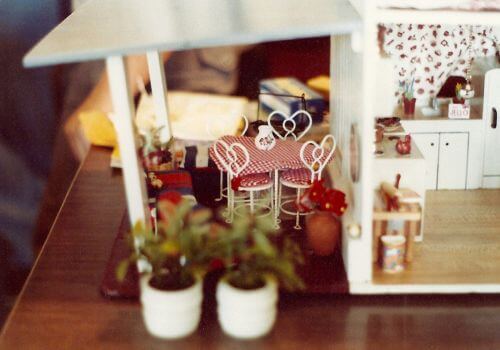 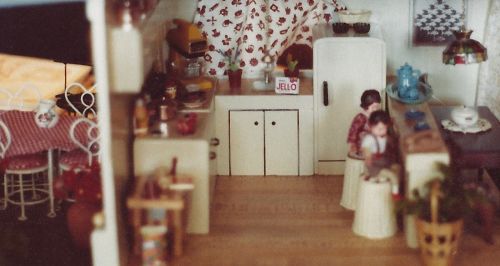 My mom made some new furniture, bedding and curtains… and used some of the older items. 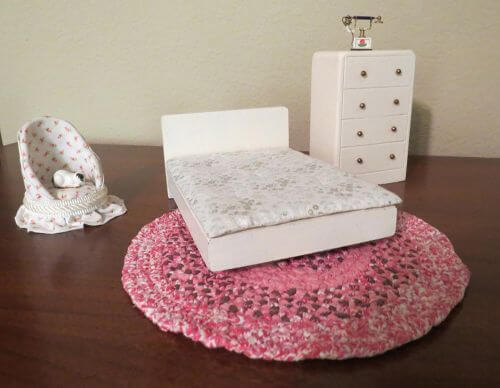 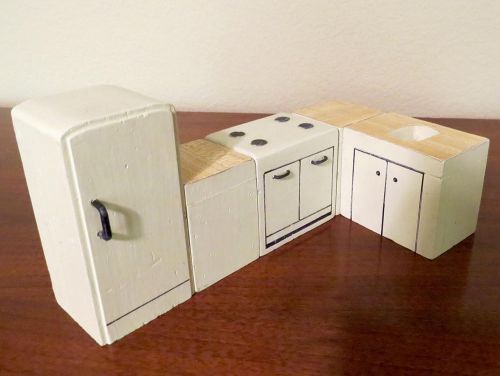 The wood beds, dressers and kitchen suite were built by my dad. My mom made the mattresses for the beds. Yes, mattresses! She also braided the rugs and made the little pink floral chair from a juice can.

The lamp originally had a design on the shade that’s peeled off over the years. 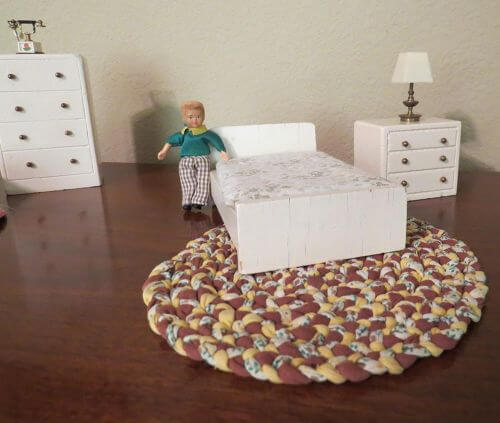 The little boy is from the original set of people. I had the entire family. I think the father is still around but I couldn’t find him today. 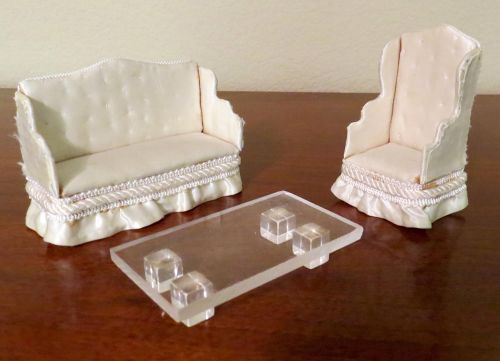 My mother made the white satin furniture and coffee table for the first renovation. I thought they were pretty special. I’m amazed they’re still so white after 32 years. 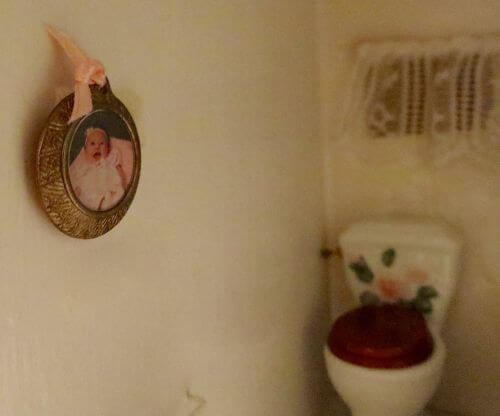 The baby picture was my mother’s idea. Whenever I’d have my children’s pictures taken, I’d give my mom the charms that came with the photo package. She used Velcro to “hang” them on the wall in the dollhouse. My daughter and my granddaughters loved having “their” portraits hanging on the walls. 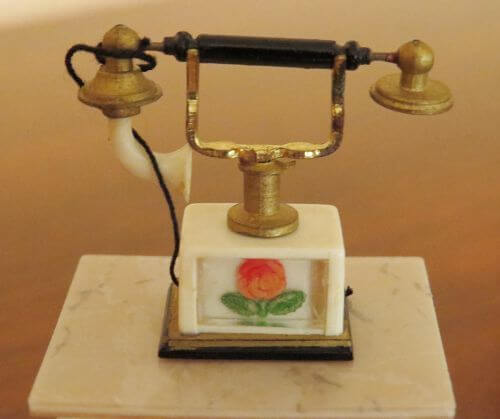 The phone has a little story to it. I still had the original when I gave the dollhouse to my granddaughters. Unfortunately, it got stepped on that Christmas morning. For several years, I searched for another one on eBay, with no luck. I was looking at Barbie collections on eBay. My daughter was sitting next to me when I clicked on the Barbie listing… and there was the phone in the second photo! Both our mouths dropped open. What are the odds of that happening?!! 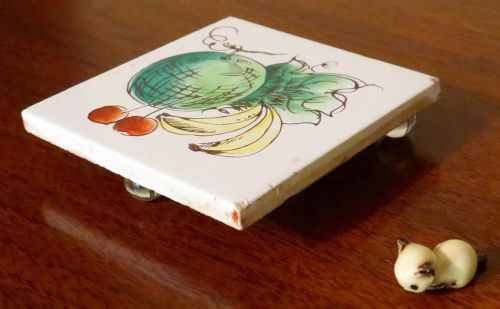 My mom made the coffee table from a tile. It’s always been one of my favorite pieces. And, finally, the siamese kitten was a gift from my grandfather who lived in Maine. He came to visit our family in 1960 and saw the dollhouse. When he got home, he mailed me the kitten to set in the dollhouse.

Third Generation — 2002: Susan and her husband renovate the house for granddaughters Natalie and Madison 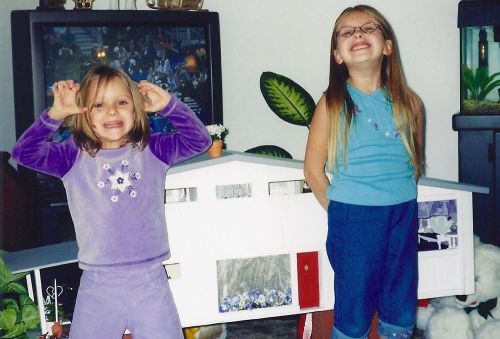 When my husband, Doyle, and I renovated the dollhouse for our granddaughters (who are now 16 and 19), I followed my mother’s lead and decorated the living room in Tiffany’s favorite color, purple. 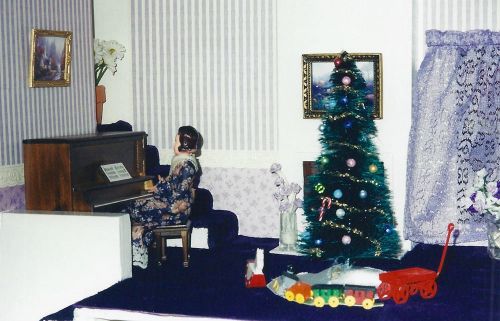 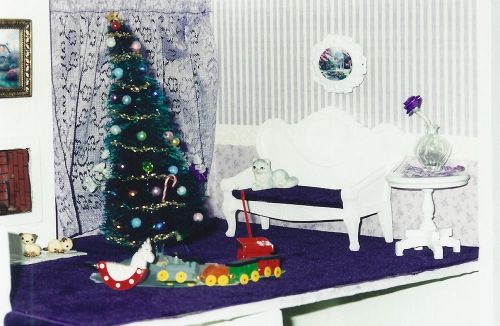 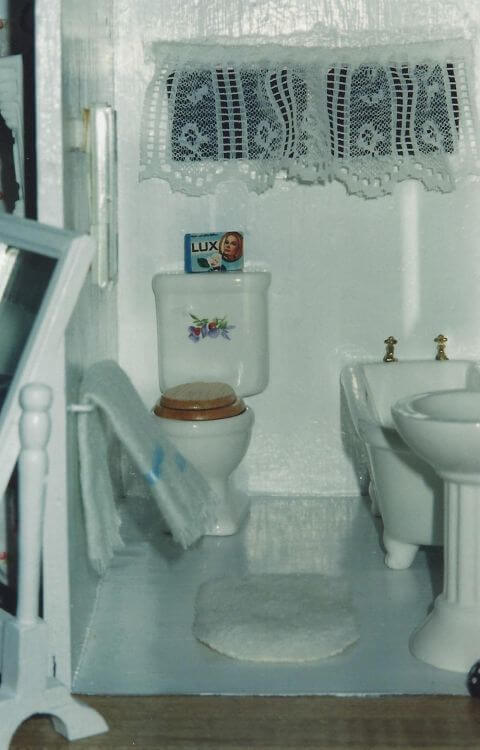 I’m not as clever as my mother was, so I didn’t make major changes. I put in new carpeting and wallpaper. My husband took care of another roof repair and repainted the dollhouse.

By this time, the carport had been stepped on. We removed it and made a patio.

We gave the dollhouse to Natalie and Madison for Christmas 2002. In the “before” picture, notice the black sheet on the top. We had to hide it every time the girls came to visit. We’d cover it with the sheet and pile empty boxes in front of it. A few things I’d forgotten about: My husband loves Thomas Kinkade paintings so I framed some paintings I’d cut off fliers from a Kinkade studio. 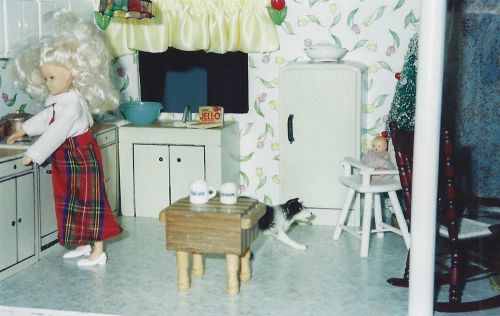 The tulip wallpaper and curtain tie-backs in the kitchen were because Tiffany loves tulips. And, of course, a Tiffany lamp had to go in the house! Notice the coffee cups in the kitchen with Natalie and Madison printed on them. I believe I bought them at a dollhouse store in Sacramento. The Jell-O box is from the original dollhouse. The Tupperware bowl was from the early 60’s.

And the next generation — coming right along!

The dollhouse now has made its way back to my house, where it sits in the guest room. I have many grand-nieces who love to play with it.

I have purchased plans for the dollhouse. When the time comes to renovate the dollhouse for the next generation, I hope to replace the drawer and carports, as well as the window frames that disappeared along the way. It will be up to Tiffany to decide the colors and theme for her granddaughter. Since Tiffany loves MCM and turquoise, I predict the dollhouse will return to its original look. I’m not sure what we’ll do if she only has grandsons!

Thank you for allowing me to take this trip down memory lane.

Susan, I absolutely love how your brother remedied the missing drawer by making a basement and laundry room — so cute. I have throughout about making a bomb shelter/basement in the space where my drawer goes, so the drawer could be removed for play but then put back for storage. Now I think I need to put laundry in there, too! Another favorite — how the vintage Jello box is still in use in the kitchen — such a fun detail.

Thanks so much for sharing the life of your Betsy McCall Dollhouse with us! It is awesome that you are working on preparing the dollhouse for its fourth generation of use. This is proof that toys handmade with love often become long-lasting family favorites.

See all our dollhouse stories: