You are here: Home / Mid Century Culture / Suburbs and the American Dream — The Minnesota History Center puts “Suburbia” on display 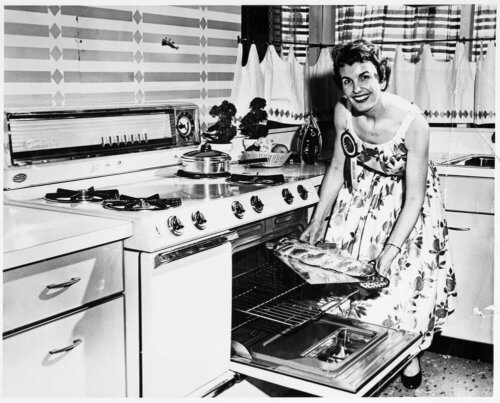 Photo viewing tip: Click the photos, and they should double in size on desktop screens — they are terrific!

From the press release:

In 1950, approximately 70 percent of people in the Twin Cities metro lived in Minneapolis and St. Paul. By 2010, that figure had dropped to 20 percent. This dramatic shift from cities to suburbs took hold across the country and is seen by many historians as one of the most important events in U.S. history. 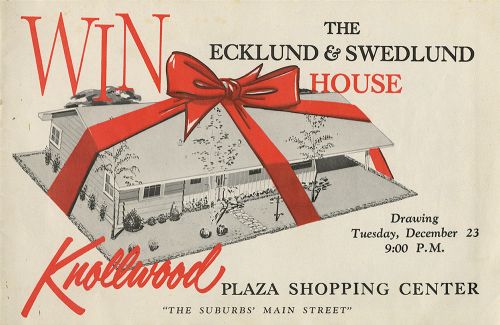 What drew people to the suburbs in the first place? Did reality reflect the dream of suburban living? And what does suburbia look like today? Visitors can explore these concepts, plus take in the changing styles of home building and interior design, in the new exhibit, “Suburbia,” Oct. 10, 2015 to March 20, 2016, at the Minnesota History Center, St. Paul. 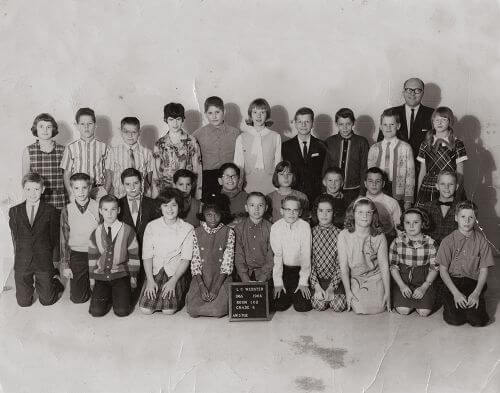 Gwen Smith class photo, 1965-1966. With the construction of I-94 cutting through the Rondo neighborhood of St. Paul, many African-American families had to move. Roxie and Silas Smith decided to relocate to Maplewood, where their children were often the only African-American students in class. Courtesy Gwen Ellis.

Through firsthand accounts, immersive settings, multimedia interactives and vibrant displays, visitors can explore the lives of the people who moved to the suburbs, those who were excluded, and all the people in between.

“In 1959, the average age of marriage was 19,” said Ellen Miller, exhibit developer. “Today, millennials are delaying the age of marriage and opting to live in the urban core. By looking back at suburban America, we hope to spark conversations about how the ideal of the ‘American Dream’ is changing.”

This exhibit is presented in three immersive settings: Building Suburbia, Living in Suburbia, and Shopping in suburbia. Throughout the exhibit, guests are invited to look back and reflect on the successes and failures of Suburbia and what’s in store for the future.

Suburbia Intro
As you enter the exhibit, a large floor map of the Twin Cities showcases the area’s suburbs. 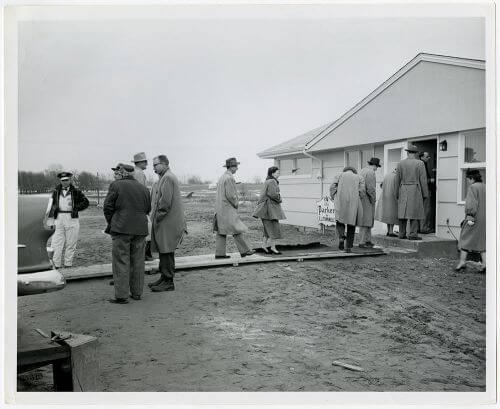 Building Suburbia
Walk through a house under construction to learn about the post war building boom and the hope of realizing the “American Dream.” Explore the changing economic and policy factors that helped increase rates of home ownership, the army of builders who filled the demands for new, modern housing, and the conditions that resulted in racial groups being left out of the dream. Learn about the Smith family who moved from Rondo to Maplewood where, despite encountering racial discrimination, they built their “dream home.”

Living in Suburbia
Enter a model ranch-style home [we sure hope there’s a pink bathroom!] where the baby boom generation grew up amid ideals of suburban domesticity and the nuclear family. See how the home reflected changes in family size, gender roles and sexual mores. Look back at how cocktails, cigarettes and cards were once fashionable, but now are considered vice. Meet Betty Bach, Mrs. Minnesota 1958, through TV clips, hear about the ideal housewife — and get her donut recipe! 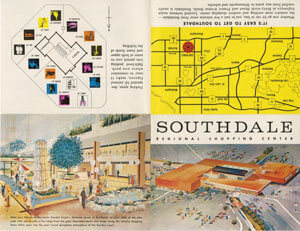 Southdale Shopping Center, 1956. “Meet your friends at the exotic Garden Court – dramatic center of Southdale. At your table at the sidewalk cafe, you’re only a few steps from the gaily decorated stores and shops along the colorful shopping lanes which open into the year-’round springtime atmosphere of the Garden Court.” Courtesy Edina Historical Society.

Shopping in Suburbia
Be transported to Southdale Shopping Center when it opened in 1956 as a revolutionary model that was copied around the nation. Designed by Victor Gruen, learn how the architecture of the enclosed mall and massive sea of parking, radically changed consumer practices, preferences and expectations across the nation. Climb inside a 1956 Chevrolet Townsman station wagon and explore how suburban growth catered to drivers with expanded freeways, parking lots, shopping centers, drive-in restaurants and movie theaters.

Suburbia Today
Consider how the suburbs have changed today. With millennials marrying and establishing families, will they stay in the urban core, or follow the trend of previous generations and opt for the greener pastures of the suburbs?

Mega thanks to reader Sharon for tipping us to this fascinating-sounding exhibit.