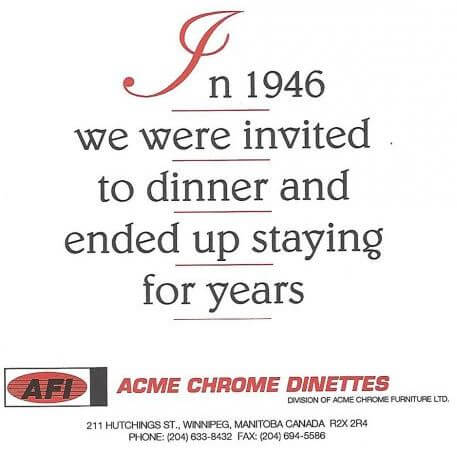 Are you looking for a vintage dinette but are having trouble finding just what you want? How about: Order a new dinette — made by a company using its original designs produced from 1949 to 1959. Yes: Acme Chrome Furniture Ltd. was established in March 1946 — and will celebrate 70 continuous years of business in two months! — and they are still making these dinettes today!

I spoke with Acme Chrome’s owner and president, Terry Clark, who was extremely generous with information and images about the history of the company — so we have a typically-epic Retro Renovation story to follow! Note, today the dinettes are officially made by ACCRO Furniture Industries, which is a subsidiary of Acme Chrome. I use the two names interchangeably in this story — but tend toward Acme, because it was the original name — and oh so retro! 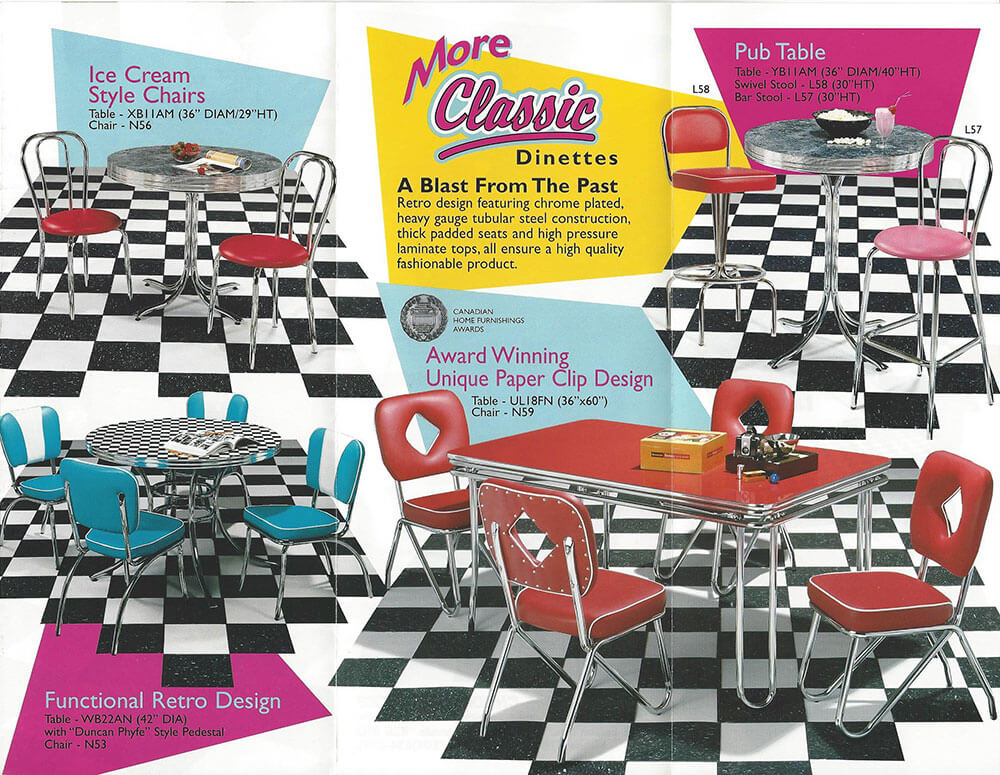 But good news: Although the original tool-bending dies went unused for the next 35 years, they remained in Acme’s possession (thank goodness for ginormous warehouses!) 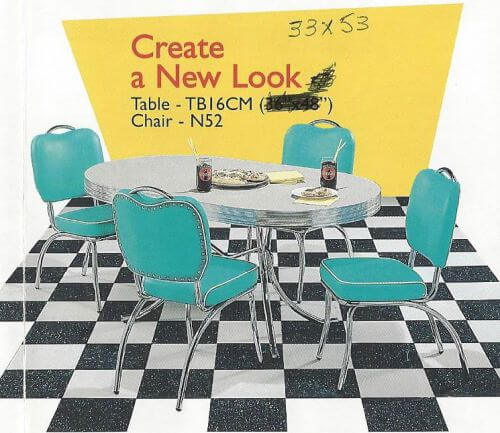 Then, in 1995, when the company was preparing for a move and had to pull the original tooling out of storage, enough years had passed that yes — what’s old was new again. Retro design was starting to get more attention — Clark pointed to the reintroduction of Volkswagen Beetles — so Acme decided to put their dinette designs back into production.

So hey, I don’t think we should call these “reproductions”! They are the same, real-deal designs from the heyday 1950s — still being cranked out today. 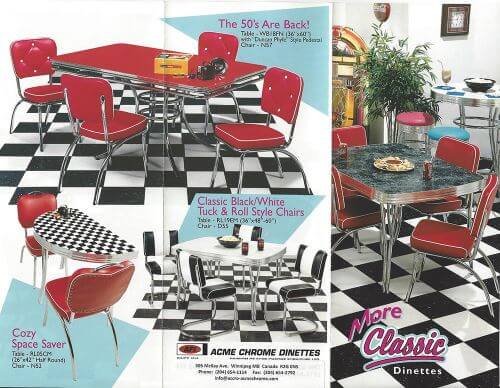 A pause to give kudos to reader Kevin for sending this tip. He emailed us:

I’ve read your blog for several years now – love it. We just ordered a brand new retro-style dinette set (aqua boomerang laminate table and dark blue sparkly vinyl chairs!) from a Canadian company that has been making them ever since 1946, and I wanted to pass on the info to you and any of your readers who might be interested. We ordered through Anmarcos Furniture in Courtenay, BC, but the manufacturer is ACCRO Chrome in Winnipeg, Manitoba.

(Continue reading — we give links and info on other retailers in the U.S., Canada and Europe at the end.)

A history of Acme Furniture of Winnipeg

When we do epic history stories like these, there’s generally a lot of email back and forth. Terry Clark followed up with at least two detailed emails to clarify some of our question. We edited and combined them to piece it all together:

Our company was founded in 1946, and the primary products manufactured in the early years included metal dinette sets for post-war residential demand.

Our furniture product evolution actually followed the consumer demographic, initially from their homes to their work places, commercial restaurants, and then to schools, and eventually into health care facilities. As the decades passed, furniture for classrooms and extended care homes eventually became replaced with products mainly for public occupancy such as the quick service restaurant, hospitality, and gaming industries.

After discontinuing their dinette production after 1959, Acme continued in business, though. The company’s mainstay business then — and now — is in the commercial arena, supplying restaurants, educational facilities, other commercial spaces — even casinos, where you may be sitting on an Acme stool when you are playing the slots!

Acme, Daystrom and Chromcraft — a brief timeline of their retro dinette revivals

Clark started as Sales Manager with Acme in 1968, so he lived through all the machinations of this market. He recalled that at that time, there were still quite a few dinette manufacturers in North America. For example, Daystrom and Chromcraft — big names, for sure — were still in the market. Regarding retro dinettes, he said:

Former U.S. manufacturer Daystrom also re-launched a version of retro dinettes in the 1990’s similar to what they had produced in the 1950’s.

Daystrom was purchased by Stoneville in the late 1990’s, but then Stoneville closed in 2002, and some of their former employees established Now & Then Furniture in Martinsville, Virginia.

Our company purchased most of the assets of Now & Then Furniture when it closed in 2007.

Chromcraft re-launched a retro dinette line at the end of the last century, which they produced until 2013 when they eliminated their U.S. manufacturing facilities.

“Designs replicated from our 1949 – 1959 product line,
but manufactured with current technology and materials”

Not conclusive, a selection: 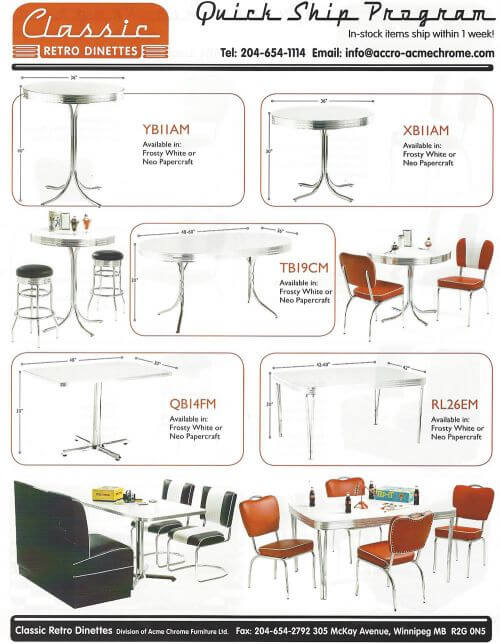 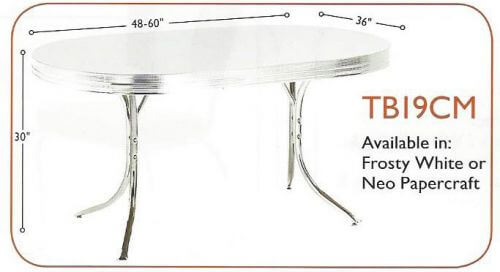 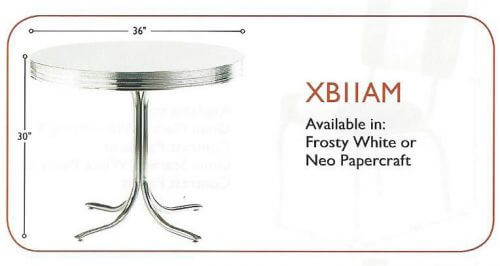 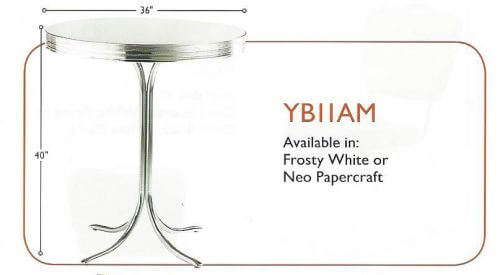 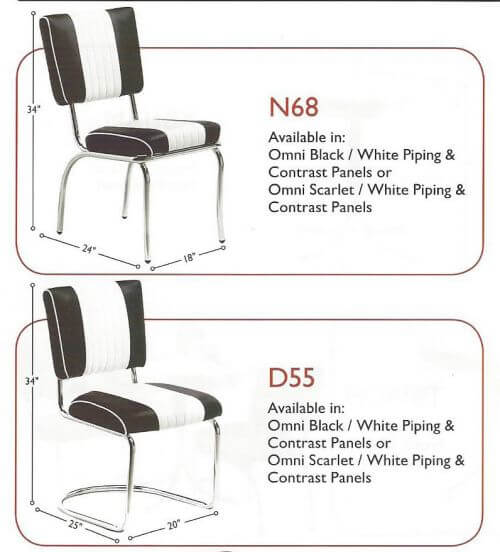 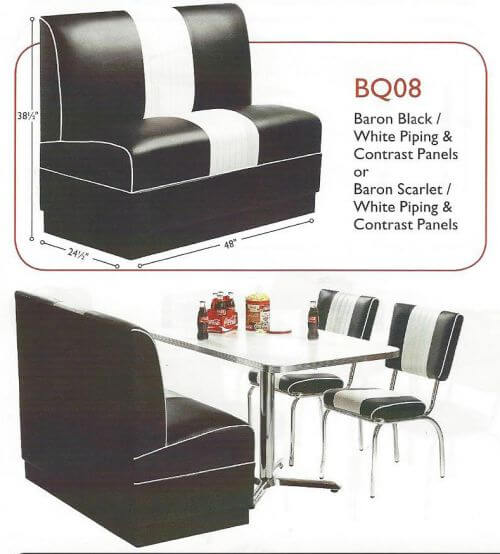 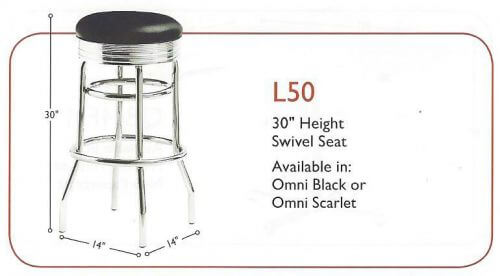 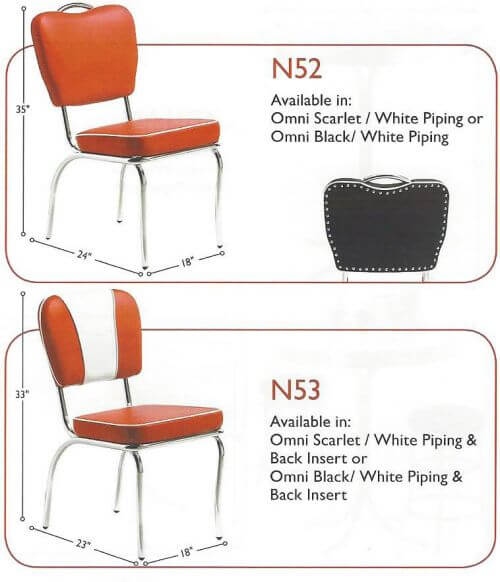 More details about the Acme dinettes made today

While the designs for Acme dinettes today are the same, some of the technology to build them has been improved, Clark said:

In the mid-1990’s we re-introduced our Classic Chrome Retro Dinette product line for which we have developed niche markets in North America and the U.K.

The Classic Chrome Retro Dinette program features designs replicated from our 1949 – 1959 product line, but manufactured with current technology and materials.

Today, aluminum profiles we use have been bright-dip anodized and do not oxidize or leave residue on hands or clothing; proprietary extrusion dies are used to form the aluminum edge trim designs. [The popular aluminum edge trim applied on tables in the post-war era was not anodized, so it would leach aluminum oxide (grey metallic residue) on to clothing, aprons, etc. much as newsprint can do to your hands. The home maker’s solution was to wipe the aluminum regularly with vinegar to stay ahead of the oxidation process.]

High-pressure laminate of the ’50s (Arborite, Formica, etc.) was available mainly in a high gloss finish, which was susceptible to scratching from dishes, appliances, and normal everyday use. Today the laminates we obtain have suede finishes or protective surfaces which are much more durable and scratch resistant.

The vinyl upholstery of the 1950’s was of a lighter weight than current materials, and usually did not have reinforced jersey backing like our vinyl does today. The result was that chair seats could split in transit due to extreme cold weather. The chairs of that era used cotton padding, not nearly as comfortable as the polyurethane foam used today.

And get this: Available laminate table tops today include discontinued Formica boomerangs in aqua, coral and blue! All the glossy finish stock is gone, you can only get matte, but hey! Seems like Accro grabbed up a bunch when it was discontinued and still can put it on their tables. They also have nice vinyl options for the chairs.

There are a bundle of option, including small, medium and large dinettes in various designs. There are chairs in several designs — you can choose your vinyl, even get two-tone design. There are tooths and bar-height tables and stools. This is so epic, I got a little OCD and tried to make a list, and gave up. Tip: Look at the AnMarcos gallery, it’s pretty amazing (first, scroll down for some photos from AnMarcos as story continues.)

These dinette sets are are not inexpensive, but Clark said they are built to last, just like the 1950s models were. He told us:

The chair and stool frames are all welded to provide maximum stability and durability, versus the mechanically fastened import products which are usually shipped KD [unassembled, “Knock-Down”] for consumer assembly.

He also said that the company’s steel features 67% recycled content — from old railroad boxcars. Note: We are not Consumer Reports experts – so do your own research.

To be sure, you may be able to find a vintage dinette set that’s less expensive. But: It’s our experience that it’s becoming more and more difficult to find them, and even when you do, those chairs in particular took a beating and likely need to be upholstered, which is gonna cost you a pretty penny. So in this sense: We think the prices for Acme dinettes are very fair — providing a product built to your specifications.

Dinettes on display at AnMarcos Furniture in B.C.

Yowza, looke the Acme Dinettes available for sale at AnMarcos Furniture in Courteney, B.C. — they really tell the story best: 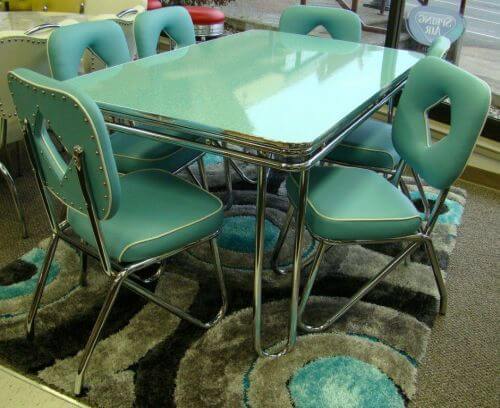 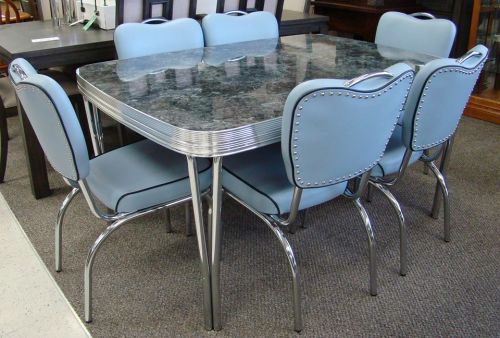 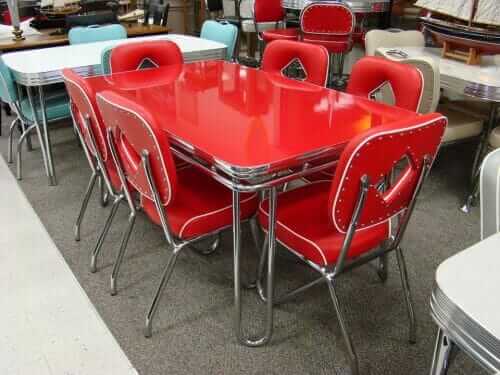 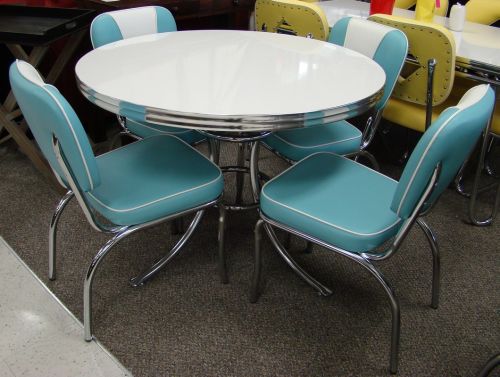 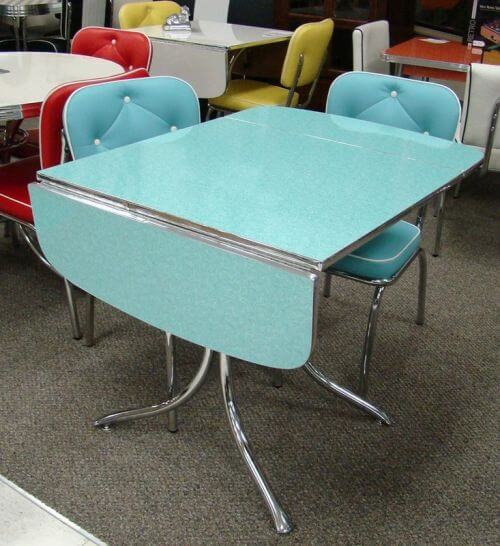 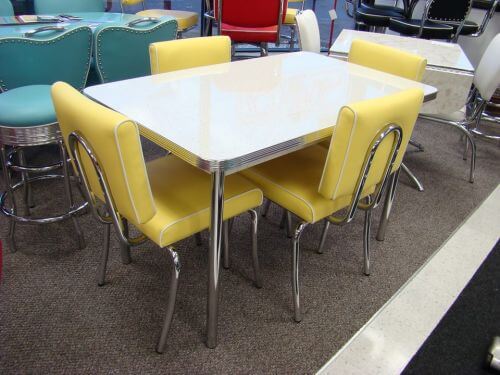 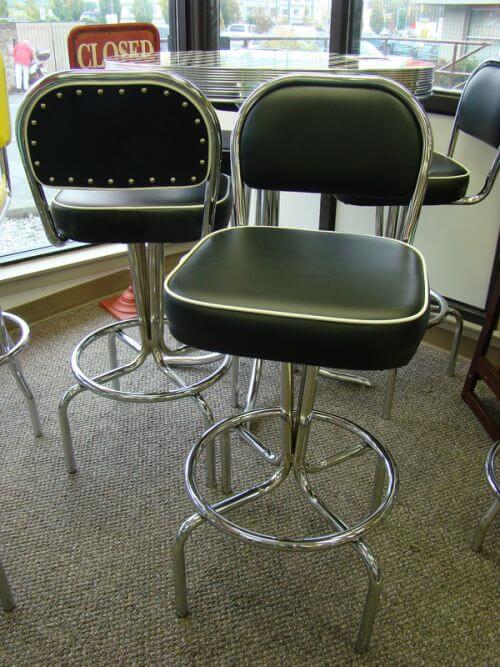 Pam talked to MarcTardif, co-owner of AnMarcos Furniture, and he said that he first bought one of these dinettes in 1997, when he and his wife were newlyweds. Ten years later, they sold it when they moved to a new home with a different color scheme. Now they have another dinette. “The quality is FAN-TASTIC,” he told Pam. “These dinettes are a best-kept secret!”

Marc also noted that one of the seat cushions, which had taken a beating, was easily replaceable, too — he just ordered a new one from Acme and swapped it out.

Marc said that over the past four years, the store has sold about 250 dinettes, mostly locally, because people like to touch and feel. But, he can also arrange for shipping anywhere in Canada — he’s sold a few more that way. He said they’re selling more and more every month — retro style continues to grow in popularity.

Thanks to Marc for letting us grab some photos to show in our story. You can see more wonderful photos of dinettes on their showroom floor here.

Acme Dinettes are sold via retailers (not by Acme/Accro Furniture directly, they the manufacturer and wholesaler.) Here are some places identified where you can buy them:

Thank you, Kevin, for this fantastic product tip. And many thanks Terry Clark, for all the terrific info and photos — we LOVE your company!

What do you think of this awesome find, readers?
Which design is thrilling you?