“Behind the scenes, Winterthur was a little less Downton Abbey and a little more Mad Men….” 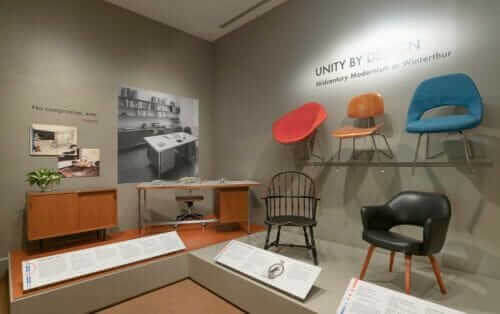 What does Midcentury Modern furniture have to do with the Winterthur Museum, famous for its collection of American decorative arts created between 1640 and 1860? The answer is explored in a new exhibit, Unity by Design: Midcentury Modernism at Winterthur, on display at Winterthur through July 28. Thanks to reader Susan for this tip!

Video: Documenting the midcentury furniture chosen for offices and public spaces at Winterthur

The answer, in short: After founder H.F. DuPont opened his family home as a museum in 1951, the museum needed to furnish offices and presentation spaces. In line with the times, its leaders chose the most stylish au-courant furniture throughout — Saarinens and Knolls and Eames and Bertoias — chairs and desks and credenzas and tables by the dozens.

For many decades since, the history and importance of this furniture faded into the everyday woodwork and workings of the museum, largely ignored. But fast forward to today, and Winterthur master’s degree student Carrie Greif has captured the story. For her master’s thesis, she went into every space at Winterthur to document every piece of midcentury modern furniture remaining. The exhibit brings her work to life. 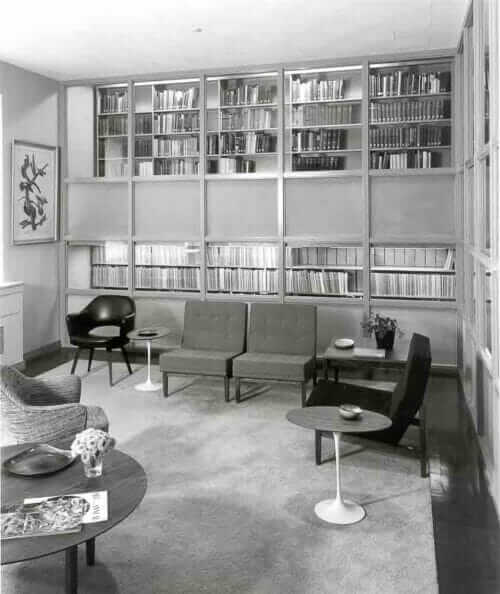 The library inside Winterthur, impeccably decorated with midcentury modern furniture classics, circa 1967. Photo courtesy of Winterthur.

Midcentury modern a “stylistic signpost” for a new museum

A scholar of “material culture,” Greif also sought to explain the seeming mis-match between the mid-20th Century furniture designs chosen to furnish Winterthur’s offices and the 17th-19th Century design focus of the museum itself. That is: Why did the new museum choose space age chairs and desks for its staff and visitors instead of … Windsor chairs and other early American designs that the museum is famous for?

In an accompanying video lecture, Greif makes the case:

The style brought a notion of appropriateness and professionalization within an emerging field and institution…. The use of midcentury modernism acted as a stylistic signpost that what was being collected and studied at Winterthur was substantial and relevant. It unified Winterthur with the prominent contemporary industries of its time.  — Carrie Greif

Even Mr. Dupont himself approved!

I love geeking out with a master’s degree thesis that explores and all-new angle on midcentury design. And this one is interesting not only for the Winterthur connection but also because Greif’s work is a great reminder/primer of how midcentury modern furniture became popularized in American. Official launch date: 1940, I learned from the video. I also loved learning more about Florence Knoll and how women were not typically given the plum job of designing chairs. Hence, we have Florence Knoll-designed desks and credenzas!

Unity by Design exhibit explores the style’s broad influence on American design, even at Winterthur

Winterthur, DE — Winterthur Museum, Garden & Library has a secret: Scattered throughout its lounges, libraries, laboratories, and offices are stashes of modern furniture that have as much of a story to tell about American design as the early American furniture the museum is famous for. See it now through July 28, 2019 in Unity by Design: Midcentury Modernism at Winterthur.

Unity by Design takes a look at midcentury modern furniture in order to better understand it as an extension of Winterthur’s collection and mission―to explore what it means when traditional meets modern. Midcentury modernism refers to the post‒World War II design movement that sprung from a desire for a new way of living. The mission was to depart from the past in order to foster a better-lived experience for the future. Although Henry Francis du Pont’s desire to promote and preserve American antiques may seem to be at odds with the aesthetic, his interest in style and design was broad reaching and he was as enamored of the new American style as anyone.

More than 170 pieces of midcentury modern furniture are still in use at Winterthur.

Some might be surprised to learn that behind the scenes Winterthur was a little less Downton Abbey and a little more Mad Men. When du Pont opened Winterthur Museum in 1951, his intention was to expand the interest in, and interpretation of, early American decorative arts. His uncompromising attention to detail enabled him to build one of the most important collections of early Americana in the world. Yet over 18 years he worked with architects and designers on the construction of several auxiliary buildings on the estate: an office wing and auditorium, a research library, conservation labs, and a visitor pavilion where the interior design presented a radically different look. From fixtures to furnishings, each of these spaces was designed in the midcentury modern style. Those furnishings―more than 170 pieces―are still in use at Winterthur.
“For many years the mid-century buildings and furnishings at Winterthur were not understood, often moved to storage buildings, and considered an anomaly. People sometimes commented that H. F. du Pont would have hated this stuff.  As Unity by Design reveals, he not only appreciated it, but helped pay for it,” said Jeff Groff, estate historian at Winterthur.

The exhibit displays pieces by famous midcentury designers Ray and Charles Eames, Florence and Hans Knoll, and Eero Saarinen—masters who crafted objects that carried the midcentury modern message to American consumers through simplicity of form, honest use of industrial materials, and a union of art and technology. Their designs for Knoll Associates and the Herman Miller Furniture Company set a new standard for modern living. It was the design choice for corporations, businesses, and homes.

Unity by Design was curated by Carrie Greif, who will graduate from the Winterthur Program in American Material Culture in May 2019, as part of her graduate thesis work. In addition to creating this exhibit, Greif catalogued the midcentury modern furniture on the Winterthur estate.

Visitors to Unity by Design are encouraged to explore the philosophy, construction, and branding of midcentury modern furniture by taking a seat and browsing catalogues that were available to consumers in the 1950s and 1960s, and by exploring photographs of Winterthur spaces furnished in midcentury style and sketches by the famous designers themselves. Unity by Design: Midcentury Modernism at Winterthur is on display through July 28, 2019, in the Society of Winterthur Fellows Gallery. 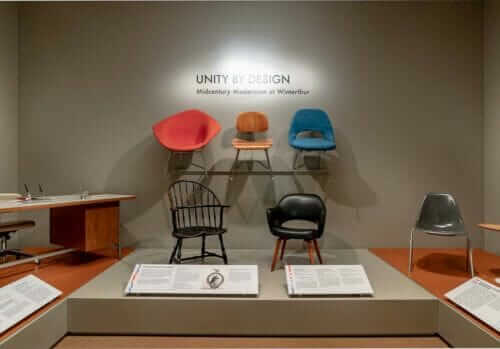 Above: A vignette draws a line connecting a common chair from the colonial era with chairs mass-produced after WWII era. Winterthur’s fellowship programs focuses on “material culture”. Hence, Greif’s analysis also looks at materials, production techniques and the like — the technological advancements that made the radical new midcentury modern designs possible. Provided by Winterthur: 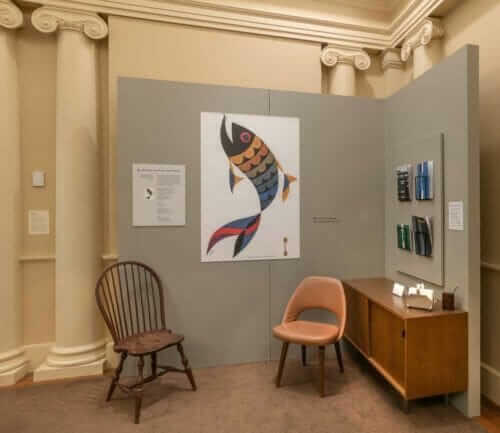 Winterthur—known worldwide for its preeminent collection of American decorative arts, naturalistic gardens, and research library for the study of American art and material culture—offers a variety of tours, exhibitions, programs, and activities throughout the year. General admission includes a tour of some of the most notable spaces in Henry Francis du Pont’s former home as well as access to the Winterthur Garden and Galleries, special exhibitions, a narrated tram tour (weather permitting), the Campbell Collection of Soup Tureens, and the Enchanted Woods children’s garden.

Nicely done, Carrie Greif! And thank you, Winterthur, for all the materials and photos!

And, are you road-tripping this summer? I haven’t updated it recently, but even still, check out our mega research: