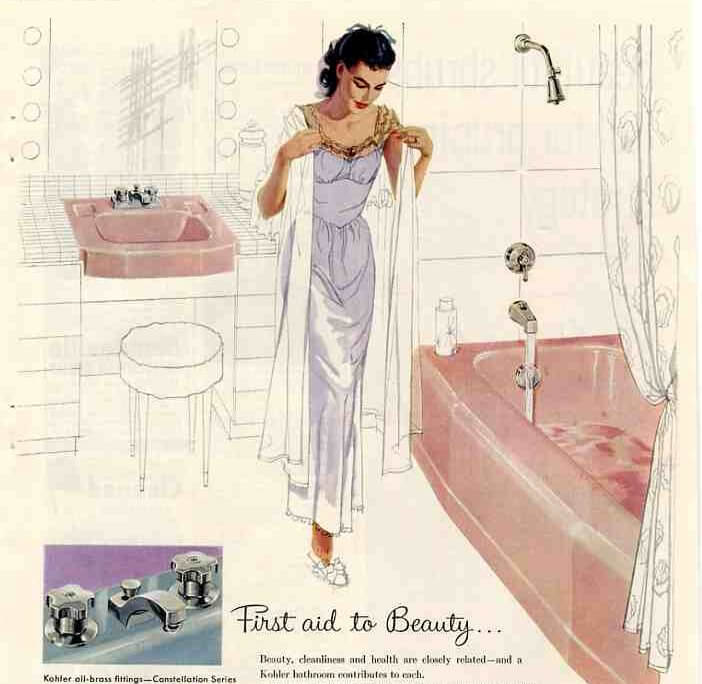 And you thought this blog is just about retro decorating? Think again, you have been reeled into the retro-universe, which is really just as complicated as today-world. Here – a lesson in evolutionary biology and how it, too, may have influenced our preference for that most iconic retro color, Mamie Pink. The Kohler ad pictured is from 1959. Ooh la la.

Girls prefer pink, or at least a redder shade of blue

A study in the August 21st issue of Current Biology, a publication of Cell Press, reports some of the first conclusive evidence in support of the long-held notion that men and women differ when it comes to their favorite colors. Indeed, the researchers found that women really do prefer pink—or at least a redder shade of blue—than men do.

“Although we expected to find sex differences, we were surprised at how robust they were, given the simplicity of our test,” said Anya Hurlbert of Newcastle University, UK. In the test, young adult men and women were asked to select, as rapidly as possible, their preferred color from each of a series of paired, colored rectangles. The universal favorite color for all people appears to be blue, they found. “On top of that, females have a preference for the red end of the red-green axis, and this shifts their color preference slightly away from blue towards red, which tends to make pinks and lilacs the most preferred colors in comparison with others,” she said. Read the article here.