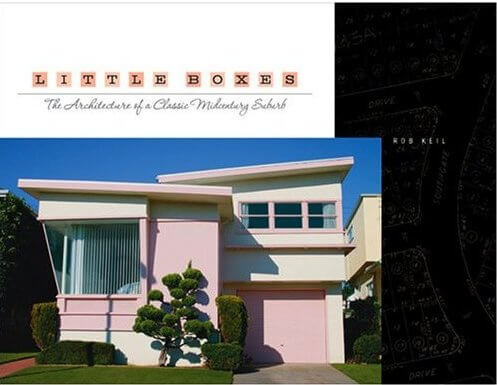 I made a new friend on Flickr recently – Thom Watson, who runs a group for photos from historic Westlake section of Daly City, outside San Francisco. There are so many wonderful postwar communities – which I’ve heard about from retro renovation readers – and I will start posting about them occasionally. This is a great one to start with – the inspiration for Malvina Reynold’s song, “Little Boxes”…which you may also have heard from Pete Seeger.

Rob so very kindly sent me an extra copy of his friend Rob Keil’s book, Little Boxes: The Architecture Of A Classic Midcentury Suburb. I’ve just finished another book – so this is the one I am reading about now, and it looks great. This suburb – and other ones like it — were the story of the 50s…truly fascinating…if there is a big Hollywood producer reading this, there are major motion pictures in these stories, I swear!

The Westlake section of Daly City is a prime example of the postwar American suburb. Attempting to keep pace with the fast-growing population of the Bay Area, developer Henry Doelger, who had built thousands of homes in San Francisco’s Sunset District, purchased a huge tract of land in 1945 just south of the City. His vision for Westlake was a relatively new concept at the time: a pre-planned community where houses would be built along with shopping centers, schools.