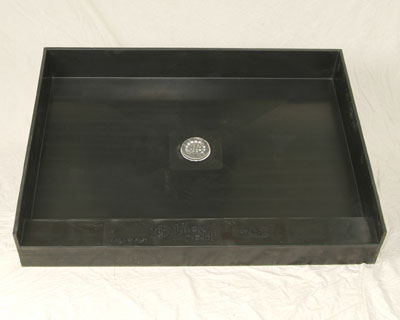 I have three bathrooms, and originally, they all had 60″ (beat to heck) tubs. When I renovated them five years ago, I wanted showers rather than tubs in two of the three. But, I was on a budget and was put off by the high cost to have a plumber prepare a shower base to tile. So…with little other choice…I installed plain white Swanstone solid surface shower pans. In reality, these have been fine. They get dirty fast – but clean up nicely with  ROG products.

Three more ideas for a shower base:

**One thing to remember when tiling a shower base –
CONSULT WITH A PROFESSIONAL about
specifying the right tile for a shower base
considering the potential for slip-and-fall safety issues.