Can you believe – they still make the Dishmaster! It’s available from the manufacturer — at dishmasterfaucet.com — and also at other retailers.

I love this product and its authentic retro style.

Make a happy mess in your kitchen – then have some more fun cleaning up. Yes – this faucet makes washing the dishes fun via the “Push Button Dishwashing” action of the special aerator brush wand – which dispenses soapy sudsy water and rinses clean, too. And, it’s Made in America, by a small company right in Indiana that literally came to the rescue to save the brand! Thank you, Silver Stream LLC! 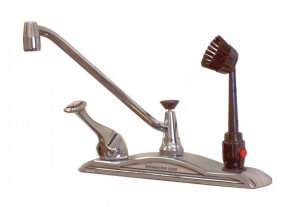 There is a third, more mod looking style, above.