Home / What to Collect 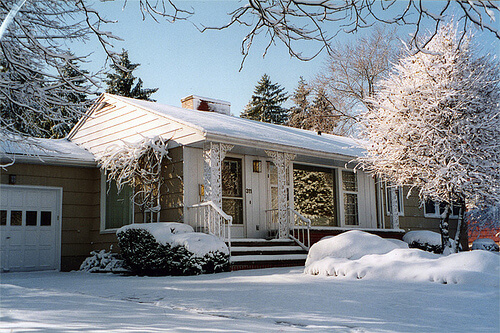 Joey Harrison is my very favorite photographer met via flickr. His mother Chalet also is a beautiful photographer – and writer. Today, her lovely memories of their family home in East Lansing, Mich. Like many of us, this house wasn’t exactly what she planned on. But… read on…

You can see Chalet’s complete photostream here.Thank you so much, Chalet and Joey, for permission to use this story today.

I left you in the black-and-white age, and have fast-forwarded 50-60 years into color, to wish you a Merry Christmas on a snowy 21st-century morning with a photo of the house I left behind.

You see, my flickr friends in Seattle, Chicago, and New England: I’m familiar with the travails, the miseries, and inconveniences of snow. Delayed flights, puzzling over which white mound in the parking lot covers your automobile. Stopped furnaces, and being placed on a long list of those in the same predicament. But there are upsides: the wonder of the first snowfall of the season, no matter your age, the beauty of familiar landscapes now changed, softened and rounded in white. Memories of sledding until darkness, then entering a warm house to the aroma of Mother’s cooking. Cutting blocks of snow to construct forts from which to conduct snowball fights. Digging cozy tunnels in snowbanks and inviting your best friend in. Becoming reacquainted with neighbors during snow emergencies, when food items or complete meals were traded. And experiencing the joy of good samaritanship to unfortunate motorists near your home.

This story is about my home of 50 years, where Joey and his sisters hung their purple felt Christmas stockings, made from the leftovers of a 1950s circle skirt.

Joey was four in 1958, when we moved into this house. Parenthood was good, and I wanted to round out the family with a girl. I had even chosen her name, Juliana, for the Queen of the Netherlands, whence came some of my ancestors in 1857 to settle the area around Holland, Michigan. Before baby though, came owning the right home for an expanded family. There were many houses on the market at that time; the problem was not having any money. The days of easy mortgages had not arrived. My only asset was a small rental house 65 miles away in Grand Rapids.

I viewed a lot of houses for sale in 1958. I had resisted looking at “Three Eleven,” this house, for months because it had no appeal. I thought it a Plain Jane 1950s ranch house with unremarkable landscaping. Viewing it inside didn’t change my opinion. The beige wool carpet looked depressingly like it would last forever. The paint colors were “old lady.” The kitchen linoleum was Grey Spatter. Anyone remember that pattern?

But the sister-owners, savvy businesswomen who had owned the Hunt Food Shop, a popular restaurant in East Lansing, across from Michigan State College, agreed to accept my $4,000 rental house as down payment. Everything was “go” to buy except my heart. But we moved in. Exactly nine months later Juliana was born.

My father was happy about the house and pointed out its many good qualities: the copper pipes, double cement laundry tubs, large dry basement, working fireplace, large back yard, quiet street, and walking distance to Michigan State College, library, and post office. He noted that the kitchen cupboards were custom crafted, not pulled out of stock.

Joey made friends with the boy next door; they spent their childhoods together and have maintained their friendship to this day. The children could walk to every school, kindergarden through college. When they were bored in the summer I would shoo them out to “play on campus.”

In another year, a bonus child arrived — a little girl we named Shelley. Our little house was getting cramped. The living room, which also served as dining room, was where I ironed and sewed. Soon we built a large family room to ease the pressure of multiple people in a small space. Just in time, because a teen-aged step-daughter, Cindy, joined our family, and the smooth family room floor proved perfect for her Friday after-school sock-hops.

With barely a groan the little house next yielded its basement to alteration. Cindy and Joey liked the privacy of living on their own floor with separate entrance.

“The best room in the house,” by Joey’s standards, was also an addition: a generous roofed and screened patio. It became the site of family reunions, parties, cocktails, and dinners for two. The patio was also home to a pouffy wicker chaise longue where I caught some zzzzzzs while ostensibly listening to “All Things Considered” before serving dinner. The house had welcomed this expansion too, without giving a hint from the street of its generosity.

The Hunt sisters learned that our house payment could be depended upon. When we decided in 1966 to build a swimming pool they were glad to forward the cost to us and add it to the contract: $6,000. (Forty years later, filling it in was double the cost of constructing it.) Having a large pool changed our way of life in some ways. We were now more home-based than ever. Entertaining was concentrated in the summer months. Friends and neighbors could depend upon me to be life-guarding every afternoon, which encouraged people to stop by. Lots of kids did especially.

The house had the amazing quality of expanding and contracting. From a high of six residents to a low of just me at the end, it always seemed just right.