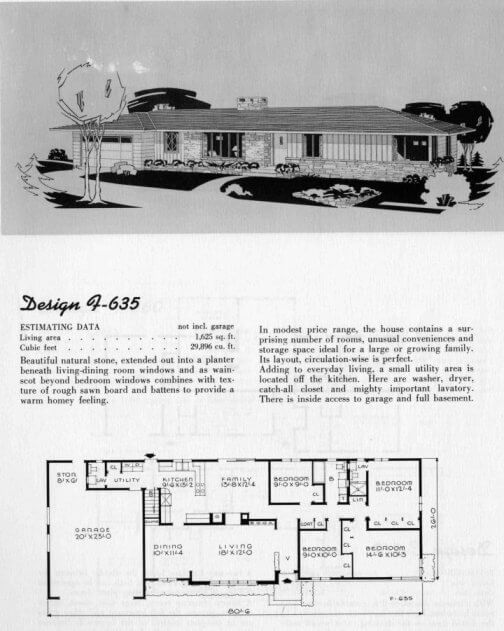 This rerun is for Sara, who is looking for a ranch house design to build. I originally ran this post back in spring 2008. Source for this design is the Small House Planning Bureau, St. Cloud, Minn. Year: No info.

“Not another one! Yes, another thing that I’m becoming obsessed with – collecting and then for hours, scrutinizing, vintage 50s house plans. It’s sort of like — the quest for Eldorado. The quest for the perfect little jewel box. Not that my house isn’t great. But I am intrigued to see if I can discover the perfect 50s house in the most compact footprint. I have these criteria, the house must have:

On virtually all other counts — exterior design, layout, size of rooms — hey, I’m flexible! Here is my first pretty darn close to perfect home, discovered after a few hours of staring intently at a new stash of home plans. I’m telling you – hours of cheap and wholesome fun!

This house gains points for:

Honestly, I think my quest will be complete when I find a 2 BR 2 BA 1,200 s.f. winner. But the more I look at this particular home design – the more I think, it’s a really really good one – especially considering that it is 4 BR. Stay tuned, the quest continues.