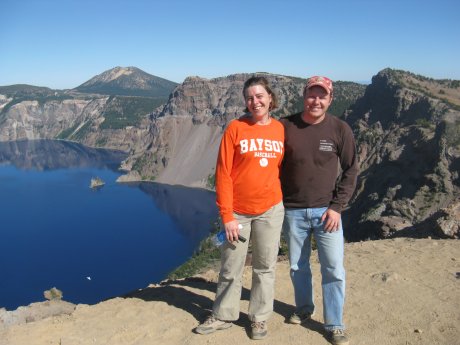 READERS GARTH AND MARTHA gave me so much information about their renovation project that I’ve split it into two posts. In this first one, Garth tells us about how they were not…no, they were not(!)…going to tackle another fixer upper when they moved from Maryland back to Dallas in November. Of course… they found a fabulous 1950 home and the rest…well, they’re now five months into their new, five-year project. In the second post, below, Garth details the saga to restore vintage Crosley metal kitchen cabinets.  When I asked Garth to tell me all about his and Martha’s retro renovation story, he wrote:

Here is a quick rundown on our renovation. Martha, Tuco, our pug, and I moved back to Dallas from Silver Spring, Maryland in November. In Silver Spring we completely renovated our bungalow house built in 1919, and had told ourselves that when we moved to Dallas we weren’t going to do that again because it took us 5 years to finish the process.

We both love all types of old houses, and really weren’t committed to any one particular style. So we looked at little bungalows and colonials and modern houses in the Dallas area, but when we saw our current house we immediately fell in love with it. It had been built in 1950, and the original owner had still been living in it. It was on a fantastic open lot with lots of pecan trees in the back yard and, a big, beautiful, live oak, and magnolia in the front yard. The back of the house was entirely floor-to-ceiling windows that faced north, and they overlooked the nice backyard. There was redwood paneling and ceilings in the entry and dining room. Ceilings throughout the house were open to the underside of the roof, which gave it a wonderful open feeling. It didn’t look like the house had any extensive work done on it since it was built, which was neat because it still had lots of the original fixtures and features, but it meant that we would be
doing another extensive renovation. 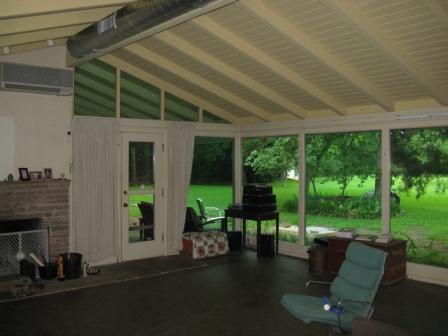 The slab-on-grade had cracked and was starting to fall in the master bedroom. So our first order of business was to have the foundation repaired. When I found out that we had a leak under the slab, and that none of the copper in the slab had been protected from the concrete which over time will eat through it, we decided to have all the copper supply piping replaced. We also had a new central air system put in the house since it was being cooled off of window units, and we were a little concerned about the hydronic radiant floor heat which is unusual in this part of the country for a residential building. When we bought the house there was carpet in every room except the kitchen and the bathrooms. Martha hates carpet, and likes to celebrate closing on a new house by immediately pulling all of it up. I had originally hoped that I could find someone in the area that would recycle the carpet for us, but the only person that I could find in the area
that would recycle it wanted to charge $300 for the privilege. I want to do right by the earth, but that is more than I willing to pay to do it. We had a contractor come in and overlay and stain the existing concrete that was exposed after removal of the carpet. We are planning on keeping the bathrooms largely as they are in their 1950s state, since everything is still in good condition, but we wanted to redo the kitchen. The original kitchen had both the water heater and the washing machine under the counters, so we moved the washing machine out to the carport next to the dryer, and we had a tankless water heater installed on the exterior wall of the house. 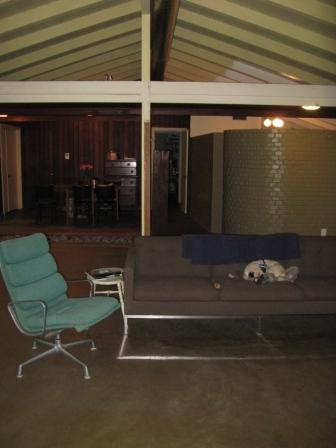 The tankless water heater is nice, but you do need to be willing to wait a couple of seconds longer for the hot water to get to the faucet from the heater than you would for a standard water heater. The delay is due to the amount of additional time that it takes for the tankless heater to sense that there is a hot water demand and to fire up. We have also noticed in some circumstances when you have the hot water tap turned on very low that it doesn’t activate the flow sensor switch, so you have to turn the faucet up a little in order to start getting hot water.

We replaced the sheet vinyl flooring in the kitchen with Marmoleum, and had the metal cabinets refinished. I built some shelving out of redwood, so that it would relate to the redwood elsewhere in the house. We have the kitchen 98% finished and fully functional, so I have moved on to other projects, and I can imagine in about 5 years from now I will get around to finishing it up along with all the other projects that didn’t originally get completely finished.

Garth — What a great story. Again, it’s amazing how much you have gotten done in five months. But I guess when the foundation is cracking, well, you gotta hop to it! Many thanks and keep us updated on the progress!