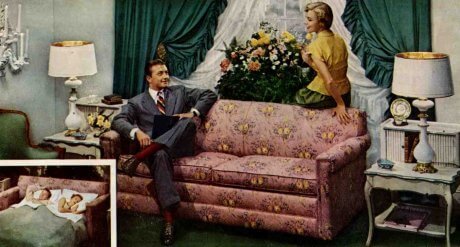 IN 1949, home interiors generally seemed to have a traditional look, and featured a soft and pretty palette, some jewel tones carried over from glamorous Hollywood, and of course, red-white-and-blue in the kitchens. Several of these images also suggest farmhouses and updating of older homes was a marketing focus — the Armstrong “Monowalls,” for example, are meant to cover failing plaster walls, I believe. Also, you don’t see much emphasis on technology — there a very few gizmos in the kitchen. In the bathroom — well, I think that many families were still getting their first bathroom.  And in the image above, the happy couple are multitasking that Simmons hide-a-bed, suggesting that this is a one-room apartment — something I think was pretty common due to a severe post-war housing shortage. In 1949 it didn’t take much to make us happy. We were still ramping up to our 1950s frenzy and the true launch of Consumer America. Click through for a slide show of  kitchens, bathrooms, bedrooms and more — 18 images in all.