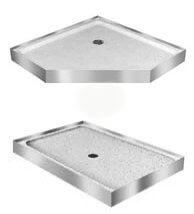 Reader Christina writes with a second supplier for terrazzo shower bases — Stern Williams. These are terrific for mid-century homes, I see them all the time in time capsules. One tip: Think carefully about the size of shower pan you get. The Stern Williams rectangle is 32″ wide, the Crane/Fiats are 36″ wide. 32″ is going to be good if you are tight for space, but that’s not much elbow room for a 5’8″ amazon like me. 36″ would be better, I believe, *if* you have the room for it.

FYI, two of my bathroom have Swanstone shower pans that are 34″ wide — as much as we could squeeze in. Honestly, I am not sure which way I would have gone if I had known of the terrazzo options. In other bathroom, I simply don’t believe there was room for 36″. The other – it would have been tight and meant a narrower enclosure for the toilet. This particular decision would have caused me anguish: More room in the main part of the usually already small postwar bathroom, or more room in the shower? Such is the retro renovator’s life, alas.

Snaps to Christina, who writes:

I have an original 1962 terrazzo shower base downstairs and I love it! I’m turning my upstairs master bath tub into a shower-only and I’ll be getting a new terrazzo base for that shower. After much research, I’m getting one made by Stern Williams, ordered via Ferguson. It’s super-heavy, but even with shipping the cost is comparable to Swanstone. So, the only downside is reinforcing the floor enough to handle its weight. I’ll get photos of each to you at some point. Great site – thanks for doing this!

Here’s the link to the Stern Williams site.