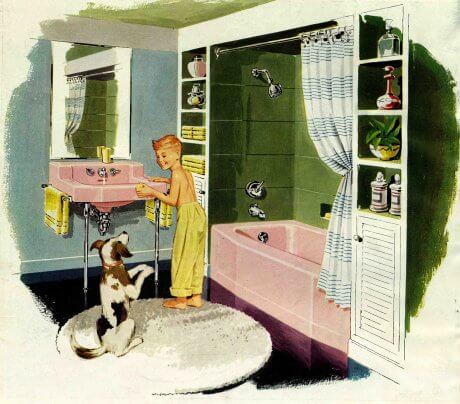 Men, embrace your pink bathrooms — there’s historical precedent, it seems, to cast aside the silly notion that this is a color just for girls. Arcalus Bo recently sent me an article that indicates that prior to the turn of the 20th century and possibly through World War II, we gave little credence to the notion so entrenched today that “blue is for boys” and “pink is for girls.” The article in particular cites research from  Jo Paoletti of the University of Maryland. Her bio says she has spent 30+ years researching and writing about children’s clothing in America, with a focus on the development of gender differences. The University of Utah Press will publish her monograph, Pink and Blue: Telling the Boys from the Girls in America, this year. In a nutshell, the story seems to be that it took a long time for gender differences related to clothing colors to become entrenched and that the pink/blue divide is really pretty recent. Even so, recall that evolutionary biologists now also are weighing in on the subject with some studies indicating that women gravitate toward reds and pinks as the result of natural selection reflecting their hunter/gatherer role. Links: The Straight Dope story about girls and boys and pink and blue, and Jo Paoletti’s blog on ethical fashion and conscious consumption. Image: A very lovely 1954 Kohler ad, woof woof. 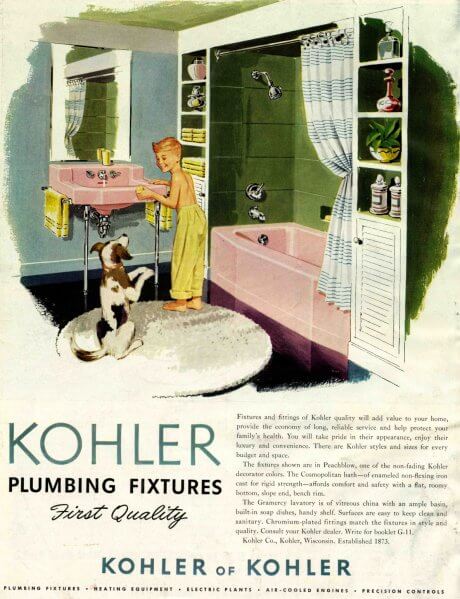