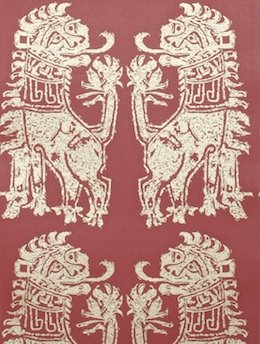 This weekend the famous wallpaper company Sanderson began the celebration of its 150th anniversary. Festivities include an exhibit at the Fashion and Textile Museum in London running through June 13 and yes, the re-issue of selected wallpapers from their vintage collections. These wallpapers are not inexpensive, but oh my, they are gorgeous. At left is Sicilian Lions  — a wallpaper that was introduced in 1956 and which Sanderson say was one of their most popular for many years to follow. Click through to see more mid-century document wallpapers available once again.

Sicilian Lions comes in four other colorsways as well. This one would be great for a foyer or dining room, I think. Sanderson gives the background on this wallpaper:

Heralded as one of the most successful Palladio designs, ‘Sicilian Lions’ wallpaper was designed by Robert Nicholson and dates back to 1956. This popular pattern appeared in four successive Palladio books. The highly stylised depiction of a lion has similarities to heraldic motifs of the late mediaeval period, but features a loose contemporary style.

English textile designer Pat Albeck created ‘Palladio Sunflower’ for the ‘Palladio Magnus 2’ wallpaper collection circa 1961. For 2010 the Sanderson studio has re-created the design as both a fabric and wallpaper.

Oh, I could be oh so forever happy in an attic bedroom with Sanderson’s circa 1957 Eglantine wallpaper covering the walls and all the nooks and crannies of the ceiling. Can you imagine, the sun dappling in… This 1950s-derived paper is said to be influenced by the French, AND there is a coordinating glazed cotten fabric — I think that mean CHINTZ — to go with. Go all matchy-matchy with this in a bedroom or sitting room — just like Sister Parrish! The official low-down:

Originally a glazed cotton fabric designed in 1957 by the Parisian studio, Pollet, ‘Eglantine’ is a charmingly romantic composition of rose branches and petals, illustrating a loose painterly style typical of French designs of the 1950s. Available once more as a fabric it is now also available as a wallpaper. 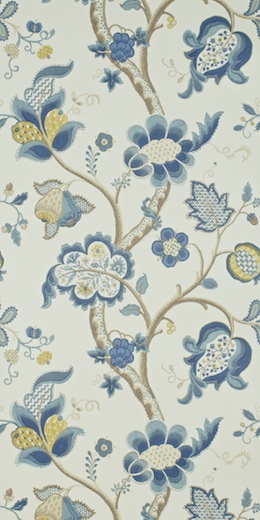 Can you believe this wallpaper, Rosyly, was produced from the 1910s all the way through to 1974? Talk about shelf life. And, it could not look any fresher today! I could see building an entire kitchen around this blue-and-gold colorway, and there are six others. Sanderson says:

William Turner, one of the most eminent designers of the 20th Century, first produced ‘Roslyn’ as a wallpaper design in 1910. It was later manufactured as a printed fabric from the 1920s. Originally known as ‘The Cleves,’ it was part of the Sanderson range until 1974, making it one of the company’s most enduring designs. Once again it is available as both a fabric and wallpaper. 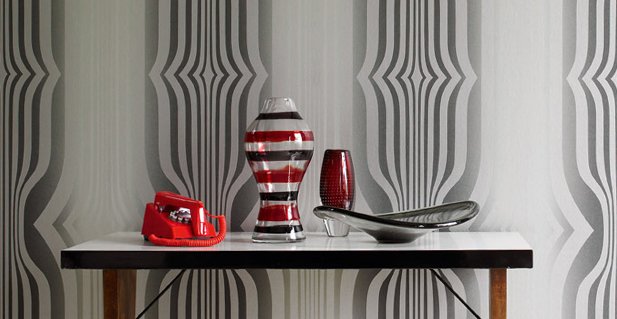 Concord (above) launched in 1964 and reflected the op-art movement. There are seven colorways — groovy, baby.

‘Concord’ wallpaper is an optical geometric design inspired by ‘op-art’ artists such as Bridget Riley. This movement was among some of the more exciting trends that emerged during the 60s. It was designed at the English firm Lightbown and Aspinall by an in-house designer and was part of the ‘Palladio 7’ collection of screen printed wallpapers launched in 1964.

Tulips dates from 1929 and has five more colorways and matching fabrics:

Dating from 1929, this design of bold tulips was originally an Eton Rural printed fabric. The original sample shows a full arrangement of colourful tulip heads painted with a highly textured effect. Now redrawn by the Sanderson studio it is available as a wallpaper and fabric.

Swallows is from the 1930s… glamorous, serene… four more colorways:

‘Swallows,’ a serene design dating from the 1930s, exemplifies the stylised elegance associated with this era. Originally a chintzed cotton fabric it shows a flock of slender swallows soaring through the open sky. Available once more as a fabric it is now also available as a wallpaper. 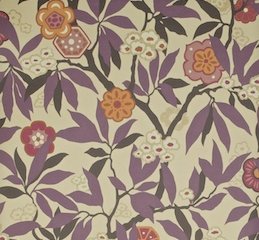 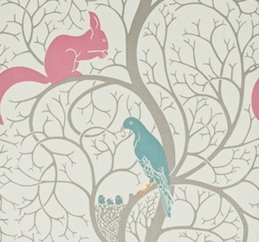 And Squirrel and Dove revives an 1890s Voysey Arts & Crafts design. There are two more colorways and matching fabrics:

‘Squirrel & Dove’ wallpaper is faithfully reproduced from the original designed by C.F.A. Voysey, the famous English architect and textile designer and associate of William Morris. Created in the Arts & Crafts style of the time, the pattern was first produced by Sanderson as a wallpaper in the 1890s and is now available as both a fabric and wallpaper.

For more information go to: Sanderson’s homepage featuring all its collections. Well done, Sanderson. Drats, though. Would you believe, I am going to London this year — but not until July. Otherwise, I would for sure go to see the exhibit — it sounds fabulous.