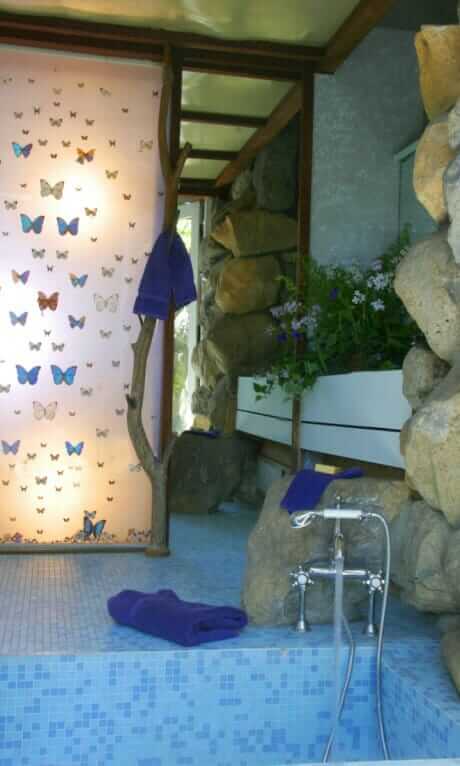 To view slide show, click on the first thumbnail, and move forward or back via the arrows below each image.

Here is more information about Manitoga from the foundation that now owns and operates this historic site:

The Wright estate was called Manitoga, and the house and studio was called Dragon Rock. The property includes a 75-acre woodland garden designed by Wright; the Dragon Rock complex comprised of Wright’s home and studio; and the striking waterfall and quarry pond Wright created. Named from the Algonquin word for “Place of the Great Spirit,” Manitoga was the primary design focus of the last chapter of Wright’s life, and he considered it his most important accomplishment.

Wright purchased the property, which had been damaged by a century of logging and quarrying, as a weekend retreat in 1942. He later moved his base of operations from Manhattan to Garrison to pursue his philosophy that people should live in harmony with nature. Over the next three decades, Wright carefully redesigned and resculpted Manitoga’s 75 acres using native plants, his training as a theatre designer and sculptor, and his innovative design ideas. Manitoga became his experiment with ways to achieve harmony between nature and design. The home, studio and woodland gardens continued to evolve through Wright’s experiments and his ongoing relationship with the land and seasons.

At Russel Wright’s death in 1976, ownership of the studio and woodland gardens was deeded to The Nature Conservancy and it was later transferred to a standalone non dedicated to preserving the legacy of Russel Wright. Public access to Wright’s home was limited until 2003, when Manitoga began to offer tours from April through October. Restoration of Wright’s studio was completed in 2004, and Manitoga continued to make the hiking trails available to the public year-round.

Today, Manitoga continues restoration of Wright’s master work and is developing a museum and botanical garden to provide ongoing care for Manitoga, and to share its treasures with the broadest possible audience.

Click here to learn more about visiting Manitoga and Dragon Rock. Note, that due to the fragility of the site, all tours are guided… times are limited… that is: Plan ahead. Also, the site cautions that there’s hiking involved, so those with physical limitations may not be able to make the trek.