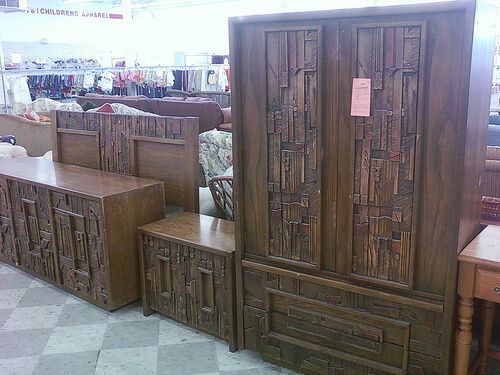 Mr. Modtomic left a nice comment yesterday, so I went to take a look at his blog, too. And what did I see but a Lane “Brutalist” bedroom set “in the style of Paul Evans” that Mr. Modtomic spotted at the Salvation Army for $249.99. I think… this brutalist stuff is a big deal. As I have said many times before but perhaps still not often enough, I am not a Ph.D. interior designer or historian and most certainly not a DIY-er … I am an obsessed writer-decorating-homebody-sweet-on-the-small-stuff woman in love with all things mid-mod especially all the back stories. The why-why-why-why-why. One of the main joys of the blog is the continuous journey of discovery. And now: I have discovered the world of brutalism, thanks to Mr. M.

Okay, so my main source of info about brutalism so far is Wikipedia, but that’s a start, right? The term “brutalism” was coined in 1953, (not the 70s or something!) when architects were working with concrete and I guess, because of the nature of the material and also for socio-political reasons (there is always a “utopian” vision, usually communist, behind this stuff), they created blocky designs that “showed” the wood forms and such.  Big chunky structures that they did not try to make look all smooth and perfect. W-pedia says the word Brutalism actually comes from the “French béton brut, or ‘raw concrete, a phrase used by Le Corbusier to describe the poured board-marked concrete with which he constructed many of his post-World War II buildings.” 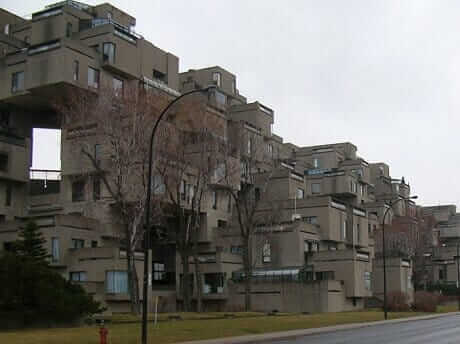 Indeed, the most famous brutalist was Le Corbusier — hey, I heard of him before, for sure! Montreal Habitat’67 was brutalist — hey, I’ve even been there! A few years ago we drove to Montreal to visit friends, and I made DH drive by so I could take photos (above). It’s very cool … But … but … I am not sure I would want to live there. It looks cold. And like, I bet I would get lost finding my cube. Back in the day, the style did not catch on much either. Interestingly, Wikipedia mentions the failure coming in part due to “poor maintenance” and “urban decay.” Hey: Shouldn’t that be our counterpoint to the “the suburbs suck” pundit-crowd?  I am heading into rant territory so I’d better stop. Suffice to say: Suburb-bashing annoys me.

Back to: Brutalism is kinda cool. And especially: That furniture. It surely screams “style!” The more I see of various design styles… understand their raison detre… and see how one design just kind of flows into the next (there usually are not hard “lines”… it’s a river that flows…), the more tolerant of all styles I become. 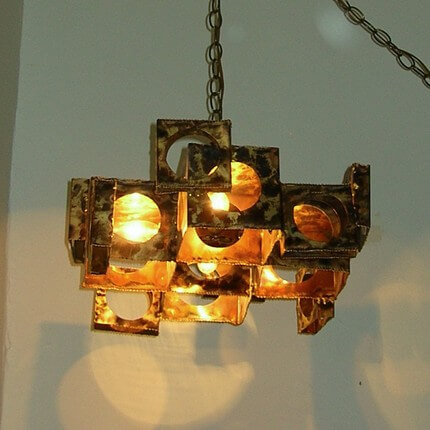 Quickly surfing around, I see that Jere sculptures also are being called brutalist. Above: Chandelier in the brutalist style by Tom Greene for the Feldman Company, $425, from retrosymphony on etsy.com.

Mr. Modtomic … feel free to tell us more! Many thanks!